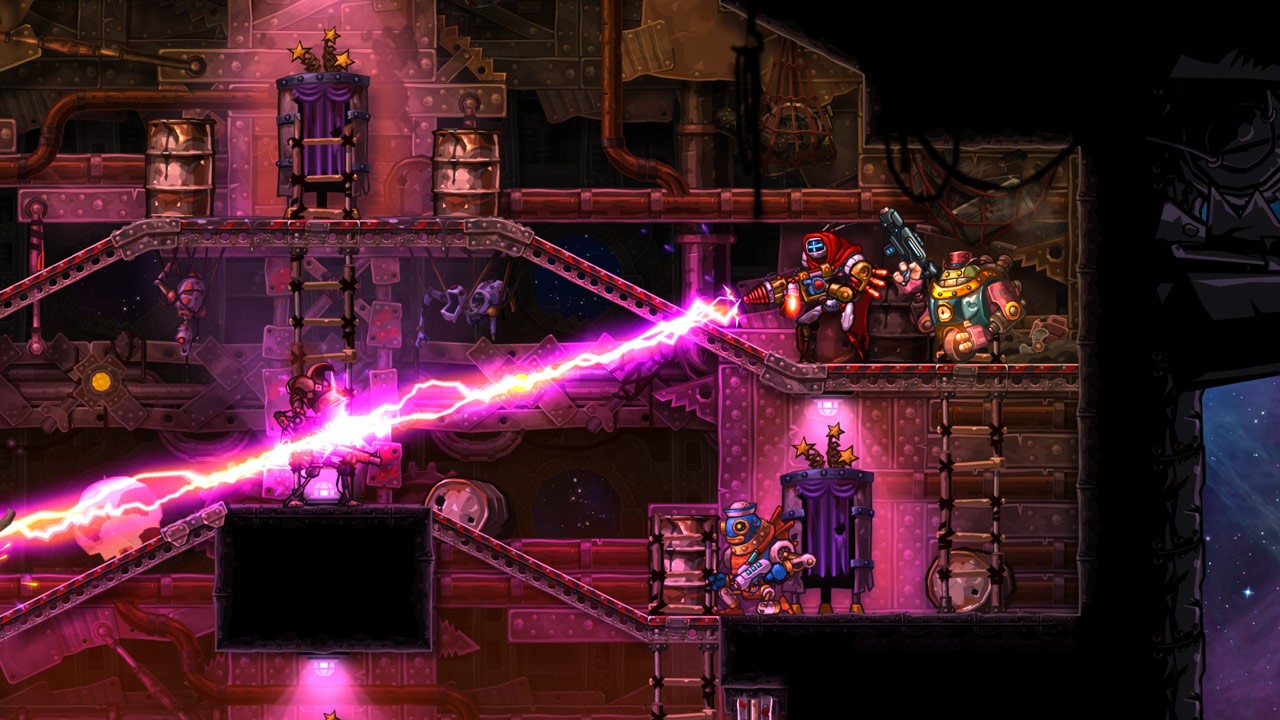 SteamWorld Heist takes its approach as a tactical turn based shooter. So if you enjoy games such as XCOM, the more recent Mutant Year Zero or even the Final Fantasy series, then there may some element of appeal to you here. You will be taking on the role of Captain Piper Faraday who is essentially a robotic form of a cowboy, a “Cowbot” if you will. You are in a futuristic universe and planet Earth has been destroyed and the mission, ultimately, is to survive and to assist the others around you to achieve this.

Now the gameplay element offers something much different to the previous game which was essentially digging, looting and levelling. Here you will be taking your turns tactically and with each “turn”, you’ll be offered the opportunity to move and shoot with your given squad mate. Once you have dealt your damage, the opponent then gets their chance to get one over you, pretty much your run of the mill turn based game. There are also other options here such as the chance to dismiss attacking the enemy and move slightly further or shielding yourself. What is different here though is the added incentive of being able to control where your shots fired travel. 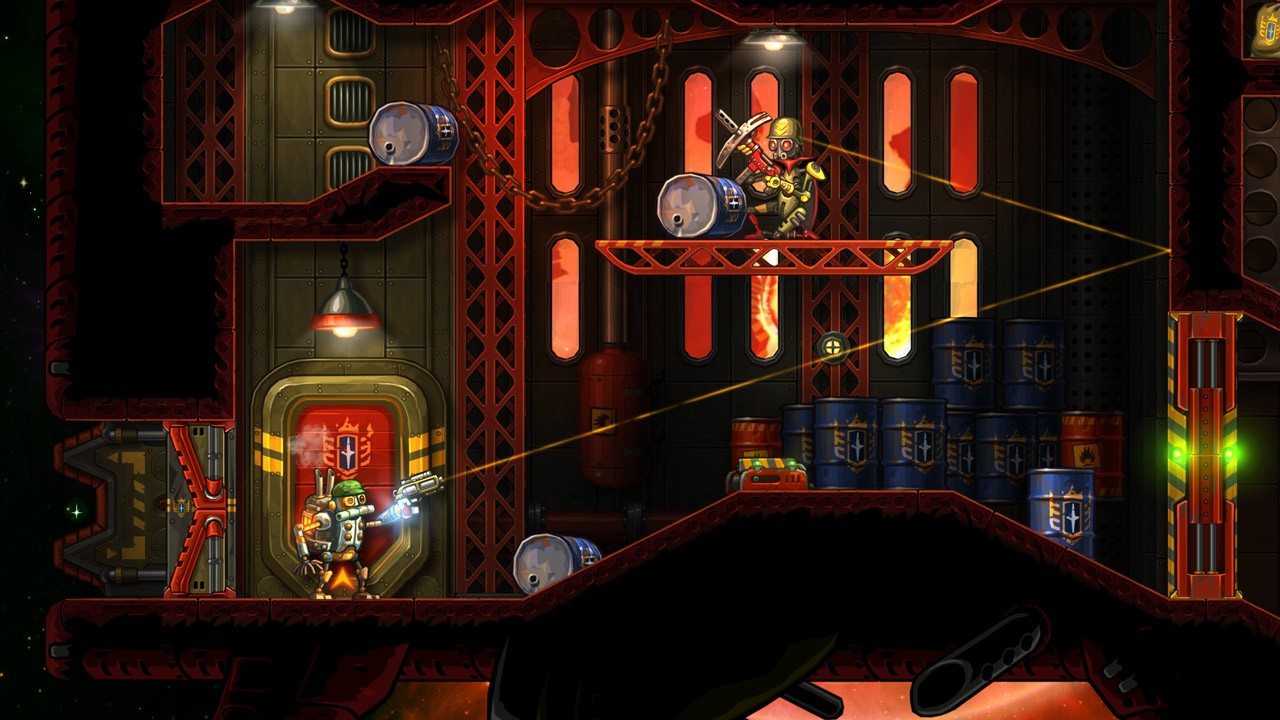 It is important for me to go a bit deeper into the explanation of how this works as it is a truly satisfying aspect of the game and uniquely so. It’s all about using your visual reconnaissance to choose where you want your shots to go first of all, as you need to weigh the scenario up, as not only can your aim be off but the bullets can ricochet off walls and objects. This can be extremely fun as you start attempting to pull off some trick shots to see if you can take out enemies in one swoop. The one frustrating thing I found though, was the camera angles and constantly having to go back and forth and this made it appear quite restricted at times. Whilst a minor bugbear it is something you can dismiss quite easily.

One change you will notice coming into SteamWorld Heist is that everything is very linear in comparison to SteamWorld Dig, the only variance being that the enemies can spawn at random. The boss battles that you will encounter can be very challenging and you will need to ensure you have a strong crew and work on your strategy if you want to progress past these. As with similar titles to this one, you will be able to level up not only your main character but the robots that fight alongside you, win these battles and you will gain reputation allowing you to recruit shiny new crew members. 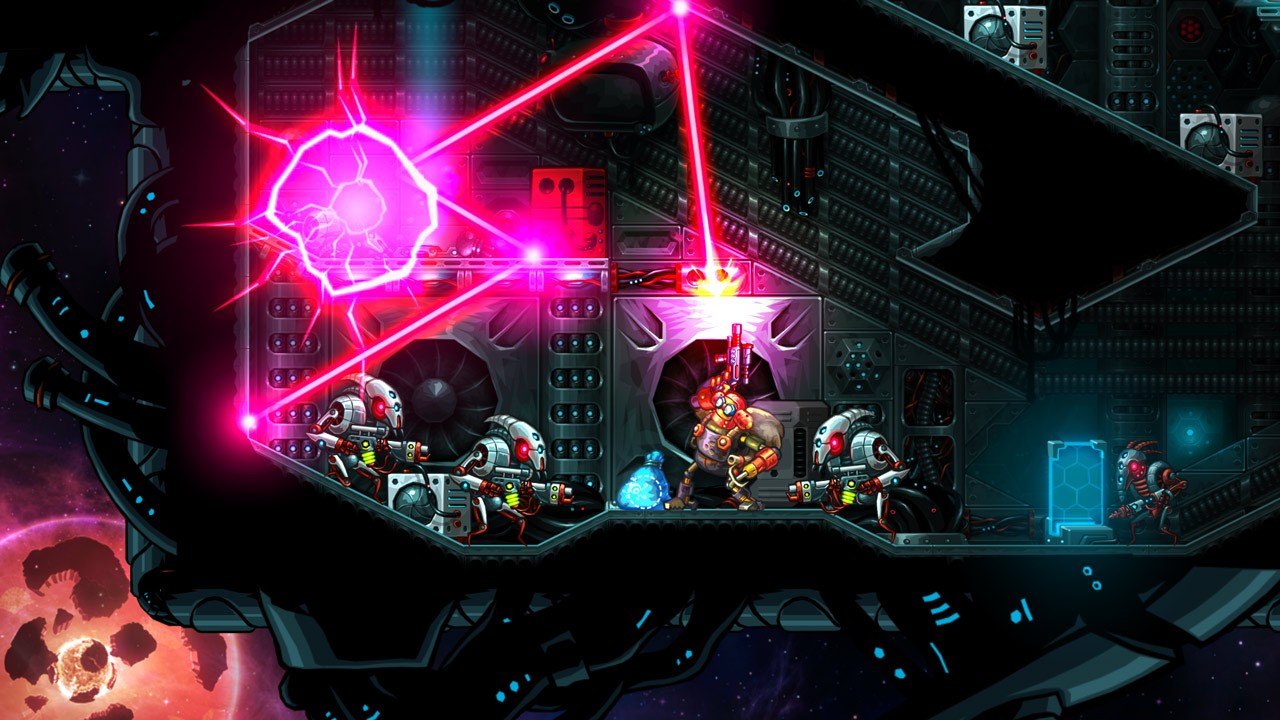 It isn’t all just fists and guns though, you’ll still be capable of doing a fair amount of looting which was what made SteamWorld Dig so addictive, at least to me anyway. You’ll be able to tinker and distribute this loot amongst your clan members accordingly and this alone can be an exciting aspect of the whole experience.

Graphically the game is beautiful yet again, adopting the same style as SteamWorld Dig, albeit in a futuristic world. Even though it is a futuristic world, there is still a western element blended into it all which is cleverly done. The team in charge of the artwork here have done excellent work of how it looks visually, it seems like a game that will never age in terms of its pretty colourful tones.

It is a pretty sizeable game as well, I managed to rack up a good fifteen hours on the Google Stadia game before I felt truly satisfied that I had ticked everything off that I wanted to see and do. But for the casual gamer this could even double your time played and it is a title I would definitely go back to for another playthrough if I was travelling or on the go somewhere. For such a low price point you would be mad not to try it on any platform, however on Google Stadia it performed brilliantly across my Chromecast, laptop with the Chrome Browser and also on a mobile telephone.

SteamWorld Heist follows on from SteamWorld Dig at a different angle as a turn based tactical shooter and does an excellent job of eclipsing the previous titles.

A new concept in the series which pays dividends

A graphical masterpiece yet again

Compelling gameplay that keeps you hooked

Camera angles can be frustrating