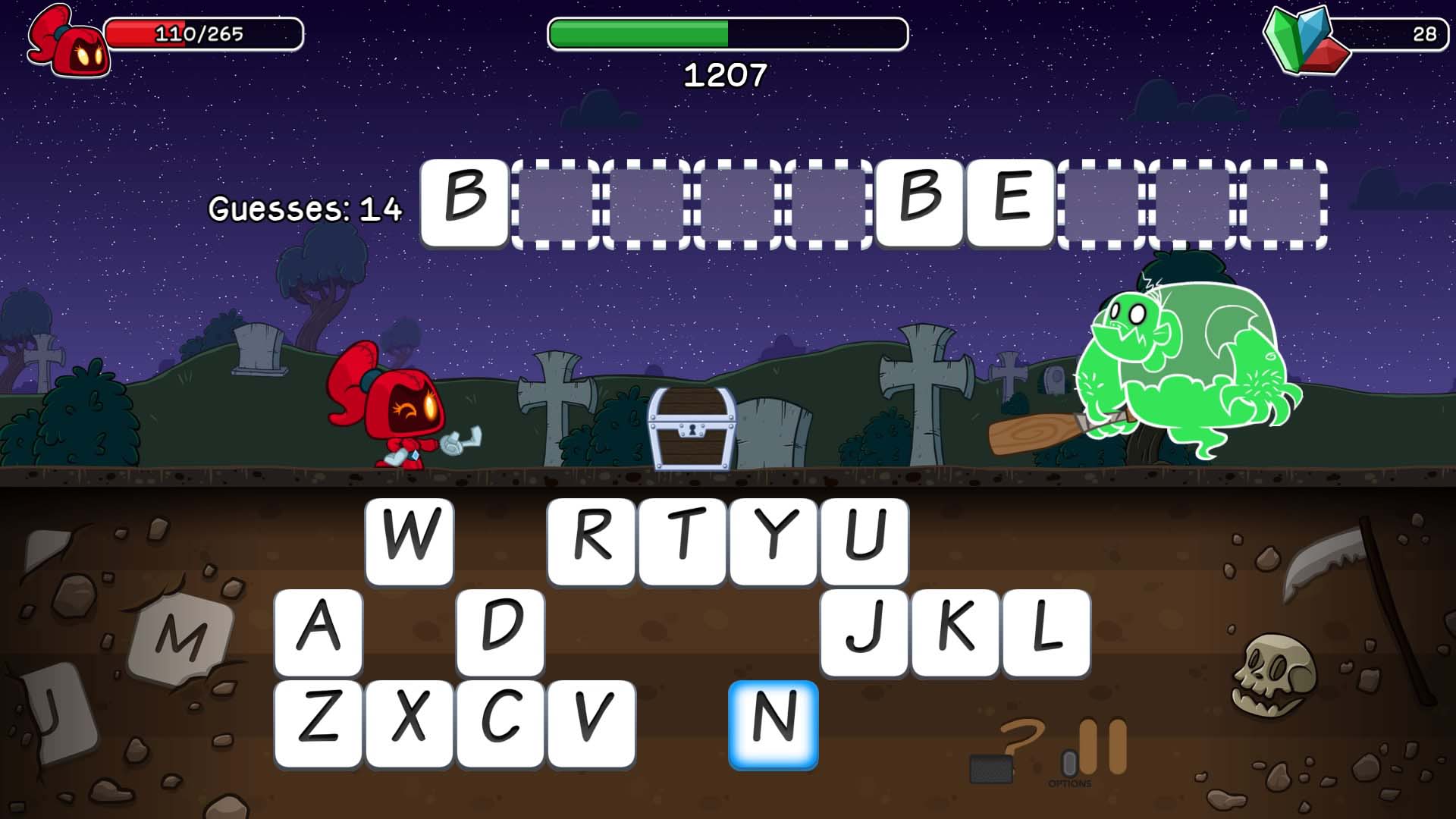 And the word games just keep on coming. You know, it’s really great that there was this interest by developers to take the word game format and try to inject some spice into it. Don’t get me wrong, Scrabble is still the granddaddy of them all and deserves a decent port to the Switch soon (pretty sure that’s Ubisoft’s department, so, hint hint), but we’ve got some pretty decent variants in the meantime. And this week, the Switch is getting ready to accept Letter Quest Remastered.

Letter Quest, the original, came out on Steam some time ago and really grabbed my attention because the developers recognized that the game wasn’t quite what it could be. The graphics weren’t as clean, the footprint was huge and it underperformed, which is something for a word game. Rather than screw everyone and forget it, they put a lot of time and effort into making the cleaner, brighter and more fun Letter Quest Remastered and gave free copies to everyone who bought the original. No matter what you may think of the game as a whole, it bears repeating that good service to your fans will only pay you out in the end, and this Switch release hopefully will prove that to be the case.

Letter Quest Remastered is the story of Grimm, a little Reaper who’s interested to grab some pizza and can’t help but deal with a bunch of monsters along the way. Rather than just swing a scythe and get rid of them in a murderous fashion, he takes the time to build words and knock them out in a turn based, Boggle-style combat. Gradually, Grimm and the player come to realize someone is trying to stop him from getting to the pizza, but who or what that may be is a mystery until much, much later. 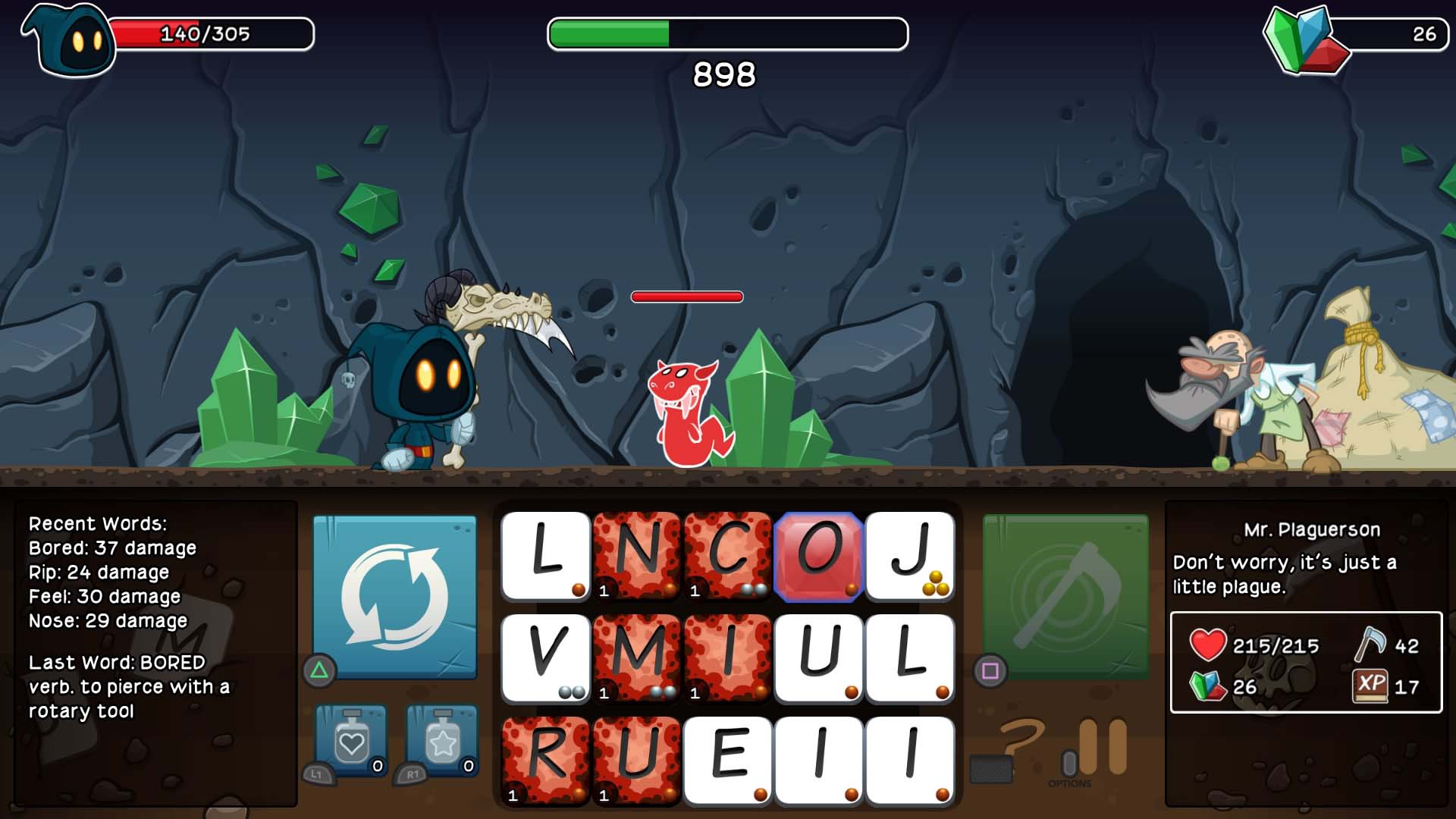 Similar to the still-fresh Spellspire, Letter Quest Remastered gives you a set of scrambled letters and demands that you put together the biggest and best words in order to defeat the monsters. However, there are some important differences that players should keep in mind. For one, there’s no timer on this combat. Rather than fire off words as fast and furious as you can, Grimm has time to carefully put together the biggest single word he can, occasionally peppering it with specialty tiles that can activate additional effects. There’s really a double edged sword to this one. On the one hand, it gives people who like digging through the dictionary (or using certain word building websites) an advantage, and makes certain battles a damn breeze, as you build a 12 letter monstrosity as long as it’s possible. On the other, the lack of pressure can make finding a word frustrating, and the word pool doesn’t always feel so fresh.

Since you use up letters with every word build, the remaining tiles you didn’t use previously stick around for the next attack. What ends up happening, as a result, is you get an entire board that’s just worthless vowels and not much else. It’s the Scrabble problem, and Letter Quest Remastered knows this’ll happen, so you have a “scramble” button that lets you swap out all your letters for the cost of a single turn, at which point the enemy can and will hit you. It’s a convenient issue, but it’s a totally different strategy. You need to plan out to use the biggest word possible the first time, but also make sure that whatever is left over might possibly work with the as-of-yet unknown letters.

Additionally, Letter Quest Remastered leans pretty hard on replay for success. The one-hit monsters are gone almost immediately and replaced by ones who slowly chip away your health, and damage is cumulative between fights and levels. As a result, you’re gonna die, which sucks but doesn’t incur any big penalties. There are stores that gradually get unlocked, allowing you to grind for gems to buy weapon, health and armor upgrades, as well as potions to heal you/cure the board (more on that in a moment) and tomes that maximize your word success. You’re going to end up spending a lot on potions over the course of the game, because, let’s face it, healing health is going to be the biggest obstacle in terms of forward motion. The tomes are cool and add random effects, like extra gems or bonus damage for certain word types, but the healing tomes (4HP for each letter E used) are always going to be best. 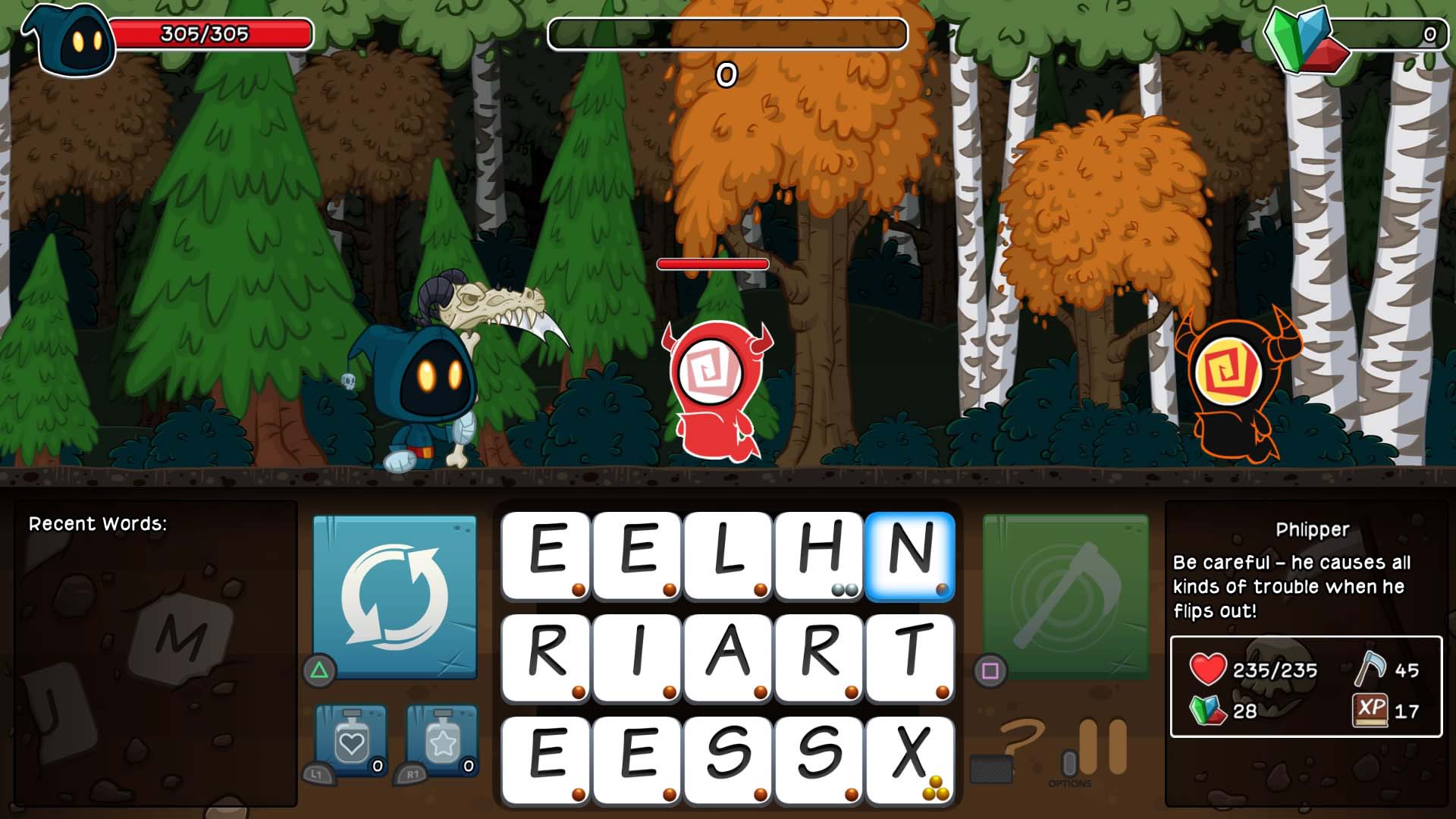 The monsters are a cute sort of ugly, coming in the form of wispy ghosts, cartoonish ghouls and some fearsome, furry animals (giant rabbits always make me smile). Besides smacking you in the head, they can also alter the word tiles, resulting in effects like cracked letters that deal no damage, or replacing a bunch of letters with just “M.” M is not a good letter. It helps in many cases but it’s not a serious damage dealer. It just exists and damn that’s annoying. This was a well crafted effect from someone who’s familiar enough with long form word play, and I grudgingly tip my hat to whomever came up with this.

Control-wise, you’ll either want to use the touchscreen or the C-buttons to move around. I had some kind of stickiness while using the joystick that resulted in me needing to click the confirm button on letters a couple times before it took. Strangely, didn’t occur with the C-buttons. Could just be my Joycons, but, in any case, try out whichever style works best. Handheld, you really can’t go wrong with the touchscreen, but I support button fixation.

Thanksgiving is coming in just a couple days, and you’re probably going to be stuck on a bus, plane or boat to get back home. Once you get there, you may end up sitting around with a bunch of people you don’t want to talk to or literally haven’t seen in a decade. Don’t put yourself in the awkward position of twiddling your thumbs. Have a great game ready that’s going to either get you left alone OR make everyone throw in their two cents on how to play. No one is smarter at word games than the person who’s watching you play, and Letter Quest Remastered may just be the game to bring together everyone so they can scream about using the Q.