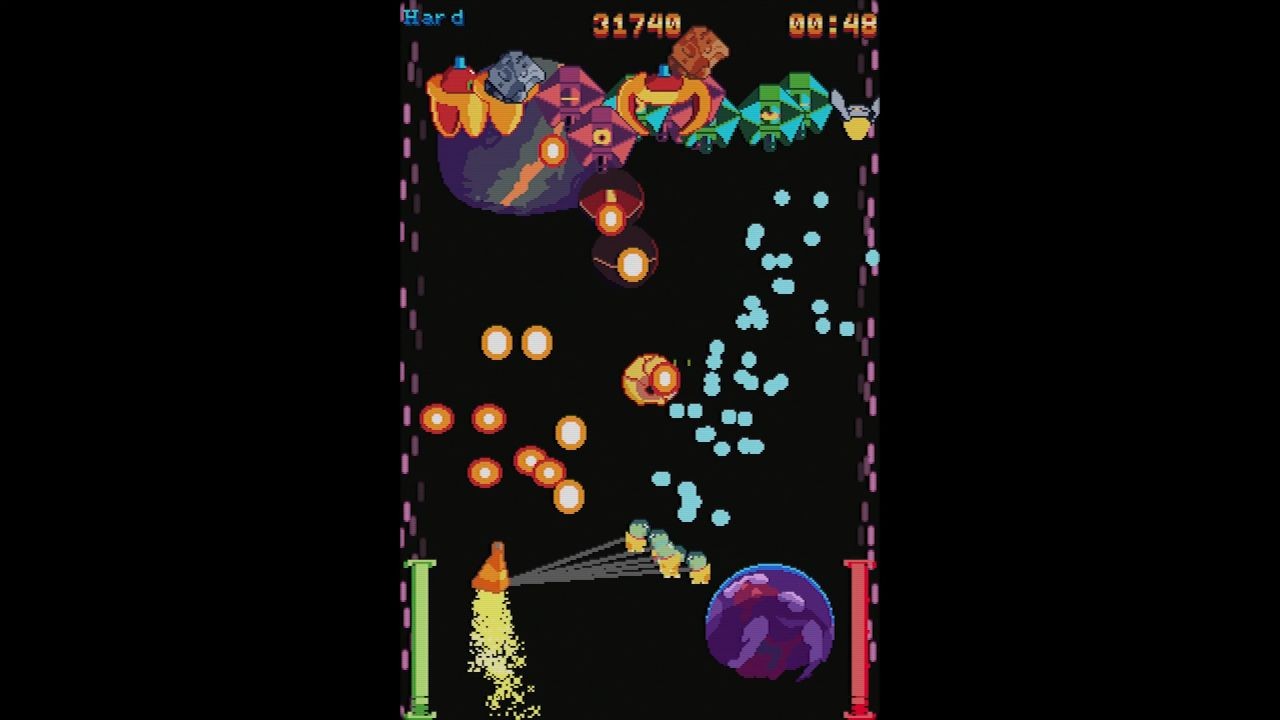 Task Force Kampas draws its inspiration from Japanese shoot-em-ups. You start off with being able to pick from a variety of characters with very basic information. One character has higher HP, another has an extra shot and there are a couple of other playable characters which can be unlocked depending on how many points/collectables you can collect. Task Force Kampas kicks off as a vertical shooter where you can move your spaceship up and down the screen, Enemies fall from above shooting out a variety of projectiles, you need to shoot back and destroy them before the screen is overrun with alien spaceships. 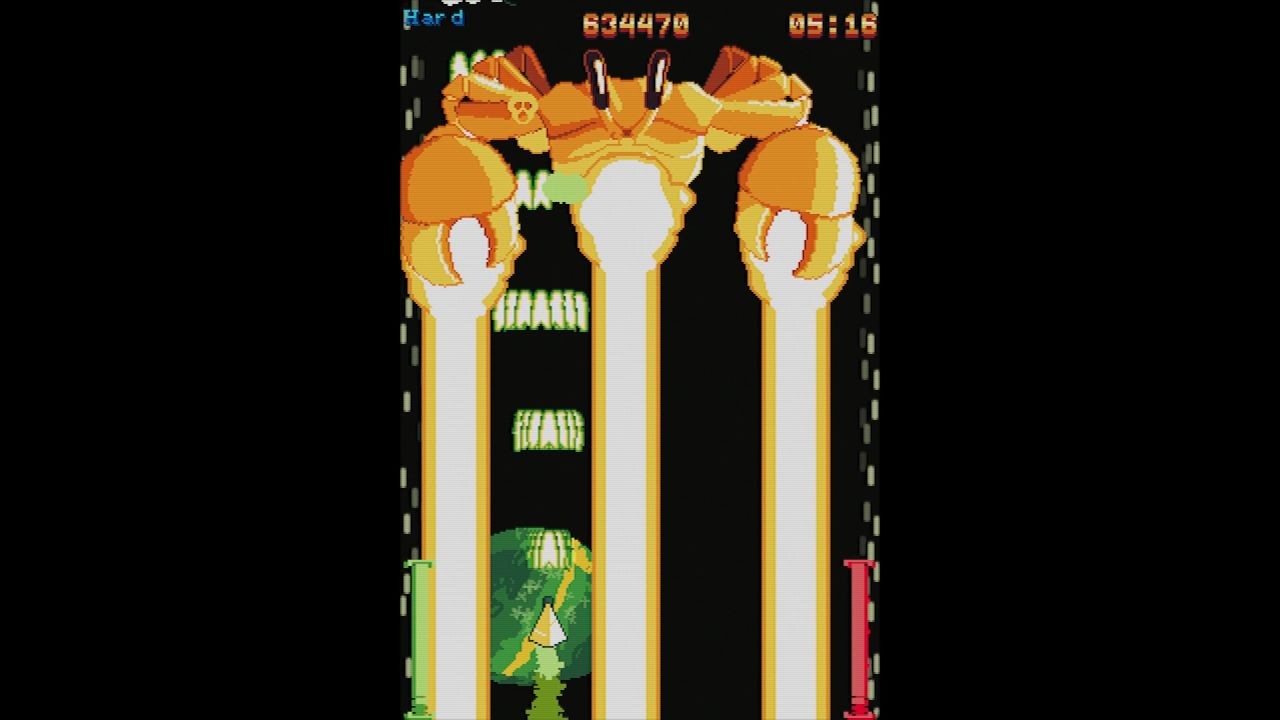 Task Force Kampas doesn’t really have a story it adheres to and is very much a game that doesn’t require much thinking or real strategy to play. Your spaceship has a health bar which reduces when you get hit, if it drops to zero that’s game over, no continues or checkpoints you just have to start again. If you stop shooting then your health replenishes, so it’s something you need to consider as it doesn’t take much to get into low health. Luckily, when you do get hit,  you become shielded for a few moments whilst you contemplate not shooting to fill your health bar or not. The more enemies you hit then the stronger your weapon becomes. There are power-ups which appear that can be picked up to help you on your way in Task Force Kampas. The power-ups are the usual health, shot etc bonuses which certainly help you on your way.

There are some collectables in Task Force Kampas, they don’t unlock a great deal but they do help to unlock a couple of new characters. As it’s a retro classic, vertical shoot-em-up, you will soon find that your screen is full of enemies and projectiles trying to damage you. The difficulty curve is a little on the hard side, if you manage to clear the screens quickly, then you’ll give yourself a few vital seconds to regenerate. Unfortunately, as you venture deeper into Task Force Kampas it becomes a bit of a free for all on screen. When you upgrade your weaponry you’ll be flying through enemies, but if you get hit then your weapons get downgraded, so it’s imperative not to get hit. There are big bosses to contend with, chances are you will die the first couple of times meaning you have to restart the game. That’s no bad thing, just be prepared that this is what Task Force Kampas is, it’s meant to be picked up for a fast play because death will be quick. 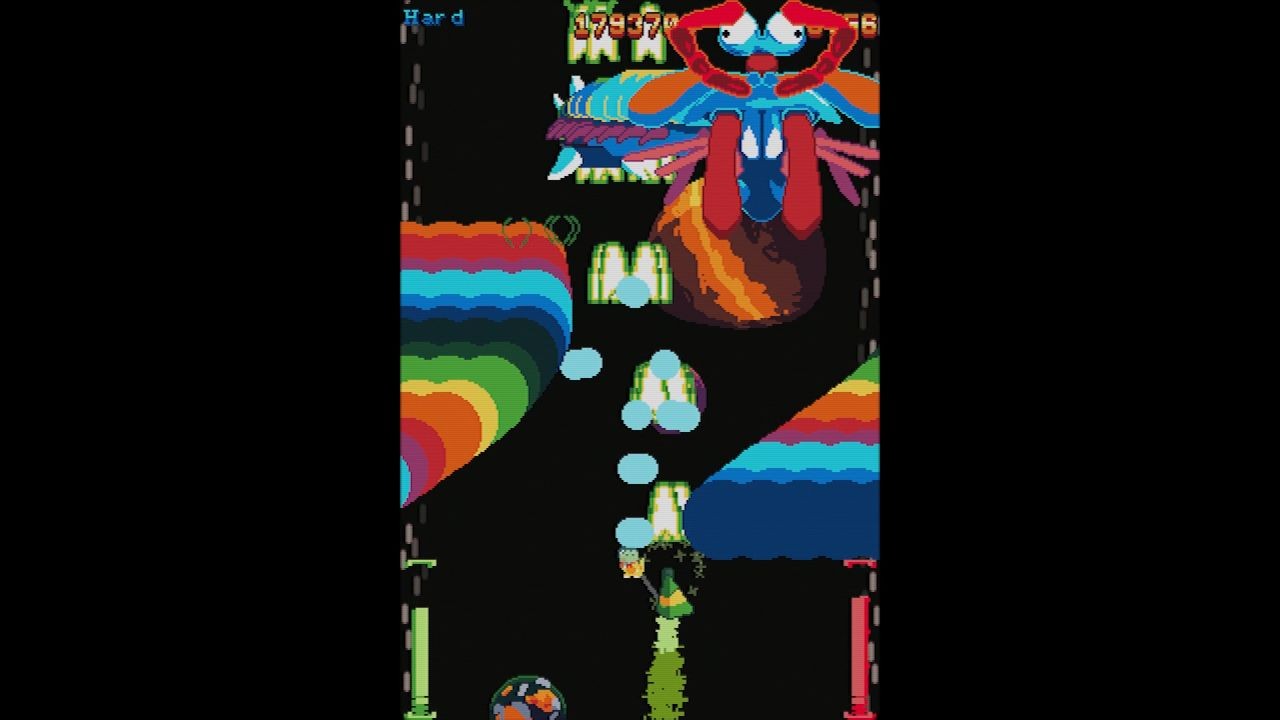 Graphically, it ticks every retro box for a shoot-em-up, the smaller enemies are reasonably detailed whilst the bosses are massive monstrosities taking up most of the view. There are only 3 big bosses to beat which makes Task Force Kampas quite a short game, you can continue after you beat the bosses but it’s a bit of an empty experience after that because all you are aiming for is a higher score. Your ship is a little on the bland side, it looks more like some kind of cone. The explosions are plentiful and will satisfy most arcade lovers. Due to the short nature of Task Force Kampas when you finish you will want to go play it again with a different ship but this one more go gaming only last a few times.

Task Force Kampas will satisfy most shoot em up fans, the Japanese style might surprise a few along the way. Unfortunately, the longevity of Task Force Kampas is on the short side of things. Task Force Kampas is a fun twenty minute title, it’s very easy to play and even simpler to control. The challenge does ramp up quite quickly so be prepared to be overrun regularly but that’s not a criticism. If you are looking for some nonplussed action then Task Force Kampas is the right game for you.

Task Force Kampas will satisfy most shoot em up fans, the Japanese style might surprise a few along the way.