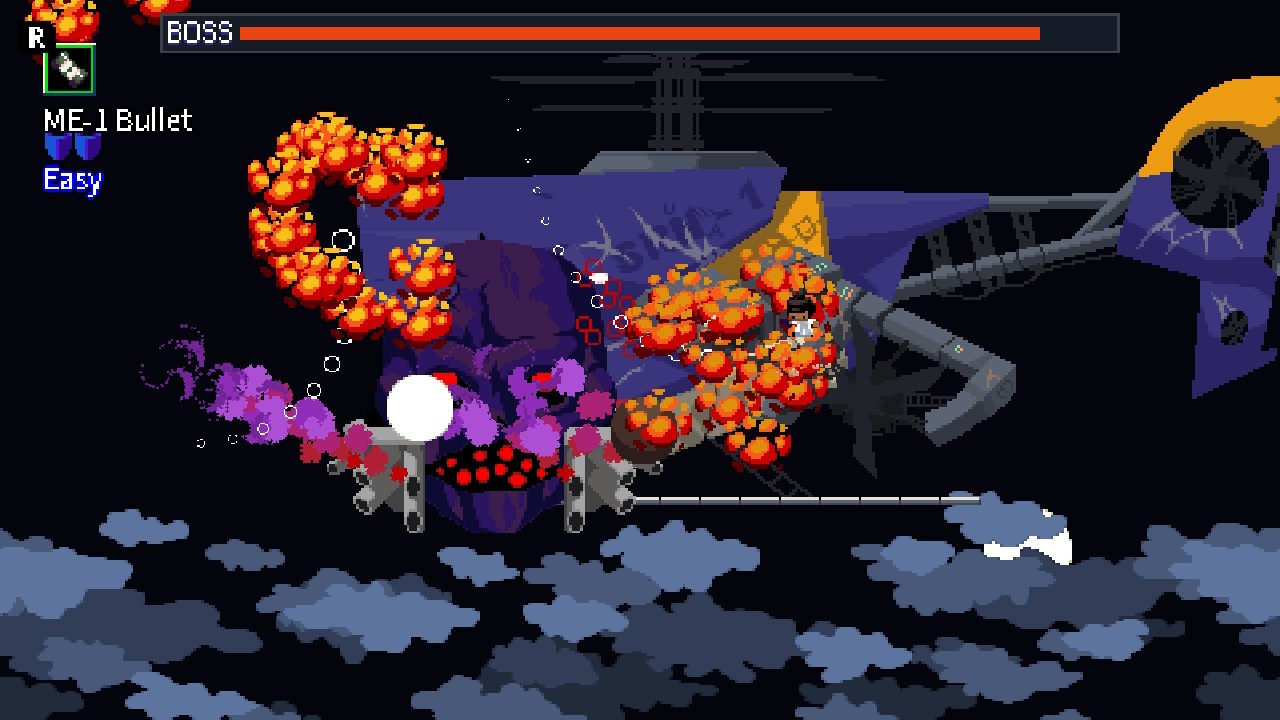 I wasn’t really sure what to make of Sacred Stones when it came into my inbox. Truth be told, I was super confused, because I thought I had received a review key for a Fire Emblem game that was released over a decade ago, but hey, maybe the GBA was seeing a resurgence on the Switch? Instead, I loaded up this game and was greeted, immediately, by what looked like Cave Story’s menu screen, and got even more confused. Some quick googling revealed that Pixel was not, in fact, the creator of this game, so the art style and the deliberate design was definitely somewhere between homage and blatant misleading. In either case, there’s something intriguing about the unknown, so I soldiered on, trying to figure out what the hell had landed on my plate.

Sacred Stones, as it turns out, is a sort of action boss battler with a strange and not totally logical story line. You’re a scientist that’s hanging out on this island lab, when there’s a malfunction and the core of whatever it is you’re working on explodes. You then gotta fight a quick boss that looks like if Thwomp had a Incan cousin, then you leave the island in a rocket ship and you see a sinister, purple Cthulhu dude that’s clearly evil and plotting or something. Anyways, the core split into four parts, and those four parts are in four shards that’re scattered across four islands. The shards are apparently unable to sit still, because they’re immediately absorbed by massive pixel monsters who you now need to blast with the gun you keep in your lab, because you’re that kind of scientist. OH, and you’ll find new ammunition (land mines, weird X-Zero bullets, etc.) as you go along, because it’s a common trope that badgers often hoard military grade weapons in their dens. 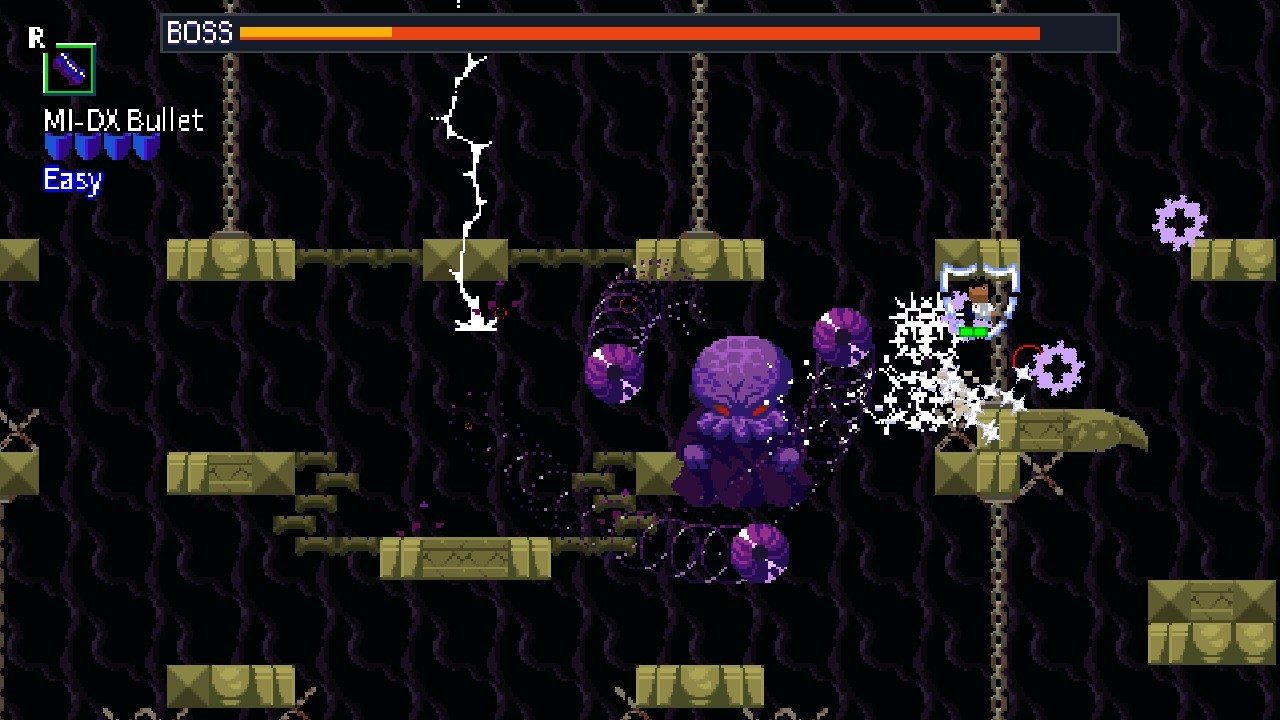 The best way to describe this game is a simple, intense boss battler that quickly and really unfairly scales to become something that’s unbelievably difficult. You only have two buttons to worry about: the jump button (B) and the “do everything else” button (ZR). You toggle between weapons with R, and you end up doing that with crazy frequency as you move forward. Sacred Stones has changed a bit from the Steam version (from what I can tell) as you start with a single hit shield instead of finding it later on. This is important, as it changes your death chance from “one hit” to “two hits”. You end up on each of these small islands with four doors (which are spread unnecessarily far apart), and behind each door is a boss you have to deal with. You gotta blast the boss till it dies, then you get a core shard and (occasionally) a new weapon to add to your arsenal. All you need to worry about is some bullet-hell style dodging that isn’t even quite danmaku intensity and jumping to places where you won’t die, such as not falling into the water or electrical fields.

Players with a bit of gaming history need to shake off initial disappointment when loading up Sacred Stones, because this is not Cave Story. Yes, it looks so much like Cave Story that it hurts. The landscape designs, the introductory rooms, even some of the weapon details really feel like Curly Brace is waiting behind door number 2. But this isn’t Cave Story, and I feel like there would have been a court case if it was any closer, so good on the dev for dodging that bullet. You have only one objective: blast the bosses. The pixel artwork does a great job of making you appear appropriately small next to the huge bosses, which, I concede, are well designed and look really cool. From giant armadillos to killer penguins and even this massive evil ferris wheel of some kind, the bosses are appropriately large, imposing and intimidating. They’re pretty cool to see, and it reminded me a lot of Titan Souls by way of some serious, influential notes of other games. I have nothing against the presentation whatsoever, and the look is great.

However, the difficulty levels do not scale appropriately. Easy is insanely easy, and you can burn through the game with just a couple of deaths if you set it down here. Easy is also interesting because you get a peek into the secret of surviving Sacred Stones: double jump and X-Zero Bullet. The X-Zero Bulllet is an upgrade you get on the 2nd level that makes a pinwheel of ammo appear in a designated location, aka “I don’t need to be eye level with the boss to shoot them.” This is positively key with the larger bosses who take up most of the screen (looking at you, ferris wheel!) and there’s no time limit for these fights. Just jump around, lop off bullets, don’t die. Hell, the first time I fought the armadillo, I unloaded into him so fast that the battle was over in a minute, and that was with the original gun. If you get the ME-1 gun, which has huge bullets with rapid firepower, the game basically plays itself. Jump, swap weapons, move forward. 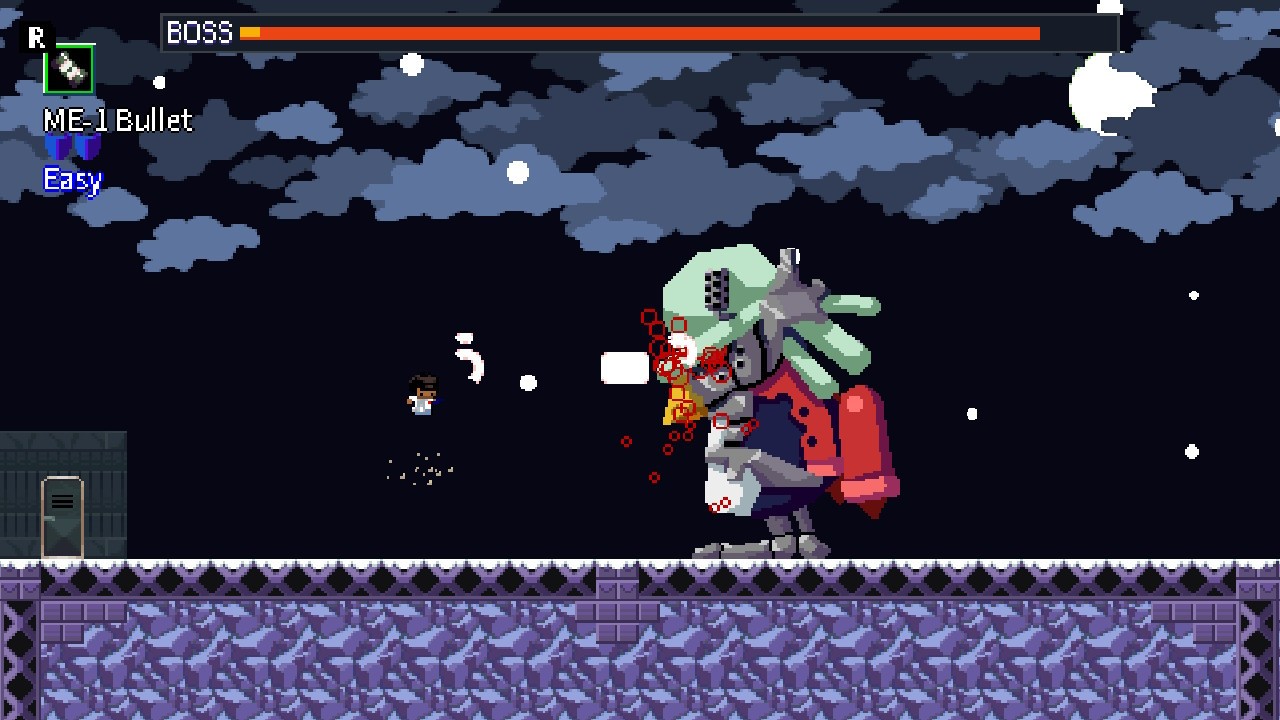 At least with the normal and hard difficulty, Sacred Stones allows the bosses to add extra oomph to their attacks, or have stronger defence, but the song remains the same all the way through. I don’t care in any capacity about the story, and there isn’t enough exposition or some kind of wild twist to make you want to care about it either. You can get a hang of things and learn how to not die fairly early on, and the extra weapons are cool but bring nothing to the table other than different variants of “jump, shoot, don’t die.” I get there’s an inherent difficulty of not getting shot even once, but who plays a game with plans to take a bullet in the ass in the first place? The looks are cool, but, after seeing all the bosses once, you feel like you’ve seen everything. You want something more, and dying because there are weird pillars to jump between to get to the 3rd door on the 2nd island hardly constitutes gameplay. There’s no advantage or disadvantage to not killing yourself between bosses, so why add frustration? For atmosphere? We killed that idea shortly after I realised there’s nothing more to the game than “kill the bosses.” There’s not even a mythic lore or excitement about it because we explain things pretty fast in the opening: purple octopus demon bad, saving shards good.

Sacred Stones genuinely isn’t terrible, but it is disappointing. You’ve got so much potential for what this could have been, and it feels like the creative budget was shot with boss design, but not even giving them solid or interesting attack patterns, and then we assumed speed runners or Twitchers would fill in the gaps, but they didn’t. There’s just not enough here to be a meal. A pretty and tasty appetiser, sure, but this isn’t going to fill your belly. All it might do, at least in my case, is make you hungry for Cave Story.

While stunning in design and packed with some good moments, the repetitive gameplay of Sacred Stones and uninspired level designs drag me down to very “ho hum” emotions.