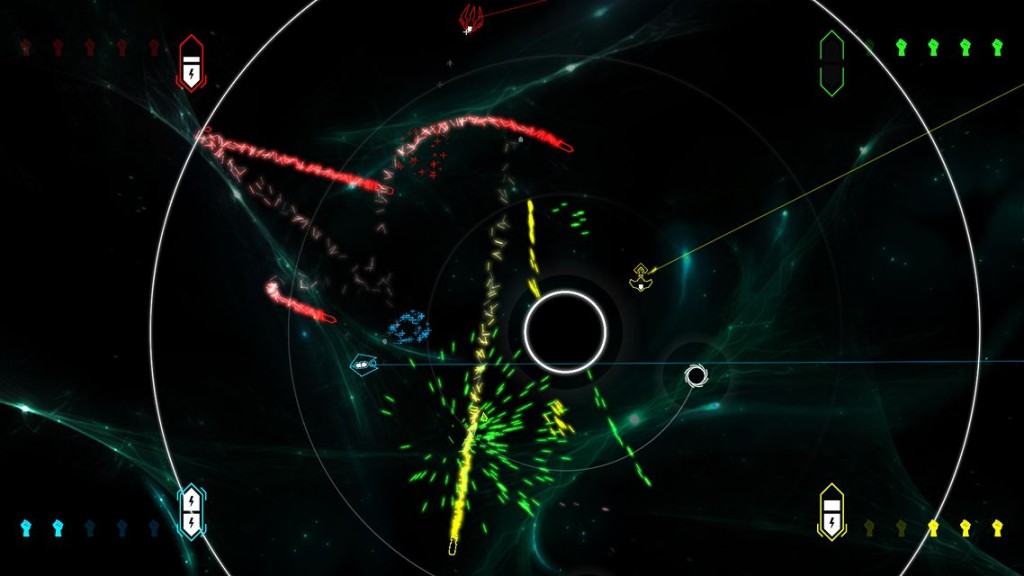 Couch multiplayer seems to have fallen out of fashion. Even the mighty Halo, once a game that prided itself on four-in-a-room deathmatch action has opted to become a fully online convert with its latest instalment. Thankfully, plenty of indie developers still see potential in more traditional form of multiplayer mayhem and with their latest game, Norwegian based 4 Bit Studios have made it their mission to keep things local.

Orbit is a sparkly two-to-four player party game that pits players not only against one another but also the harsh elements of deep space. Heavily inspired by Atari’s arcade shooter Asteroids, players must steer their chosen vessel around a perilous circular arena made up of swirling planets, bombarding comets and the gravitational pull of a sun, located in the centre of the map. To make things even more challenging, each vehicle only has the capacity to travel so far or shoot off so many rounds before the engines begin to overheat and you’re forced to let them cool down if you stand any chance of surviving.

Simple in it’s design, Orbit makes for gorgeous viewing. The ringed arena against the celestial backdrop makes each ship and their coloured coded projectiles stand out against the abyss. The drum’n’bass soundtrack adds some extra vibrancy, particularly when competing with friends all frantically trying to stay clear from orbiting planets or worse. There are over five thousand map variations and level combinations to be had, although generally the only difference is the amount of on-screen hazards are present during each round. Still, it makes for a slick looking game that is worthy of its Asteroids heritage. 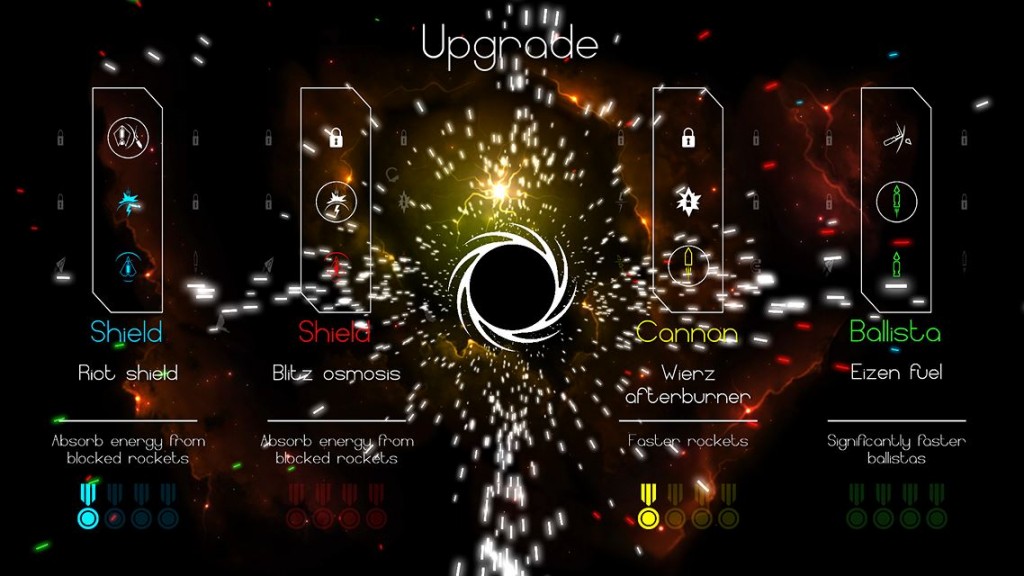 There are four game types to choose from – Survival, Destroy, Annihilation and Conquer. Survival gives each player ten lives and the aim of the game is to basically not get hit by any of the hazards or opposing players within the arena, with the last man standing being crowned the winner. Destroy mode reduces the amount of galactic threats in favour of an all-out deathmatch while Annihilation limits players to six lives each in order to inspire a more quick-fire style of gameplay. Lastly is the Conquer mode, which is perhaps the most interesting of the bunch. A king-of-the-hill style of game, the objective here is to remain in orbit around various points around the arena for an extended period of time in order to gain control of them.

It may seem like a lot of variety but unfortunately most of these game types rely on taking the same approach. The left analogue stick steers and thrusts your vehicle around the map, but the key skill involved is using gravity to your advantage and letting your environment do the hard work for you. Simply pushing yourself out of harm’s way into a secluded corner of the arena won’t work as you’ll eventually overheat your engines and your spacecraft will blow up. On top of this, you can also aim and shoot by using the right analogue stick and the right trigger respectively.

Juggling these controls is tricky and with a very limited tutorial on offer, the only option is to get some practice in and hope that your mates find it even more difficult to get to grips with the game than you do. Learning how to utilize gravity to curve your missile strikes is a challenge in itself and more than often, you’ll find landing a strike to pure luck rather than a well-earned skill. It makes matches that bit more frantic, spicing up a gameplay style that at times can feel more dated than retro. 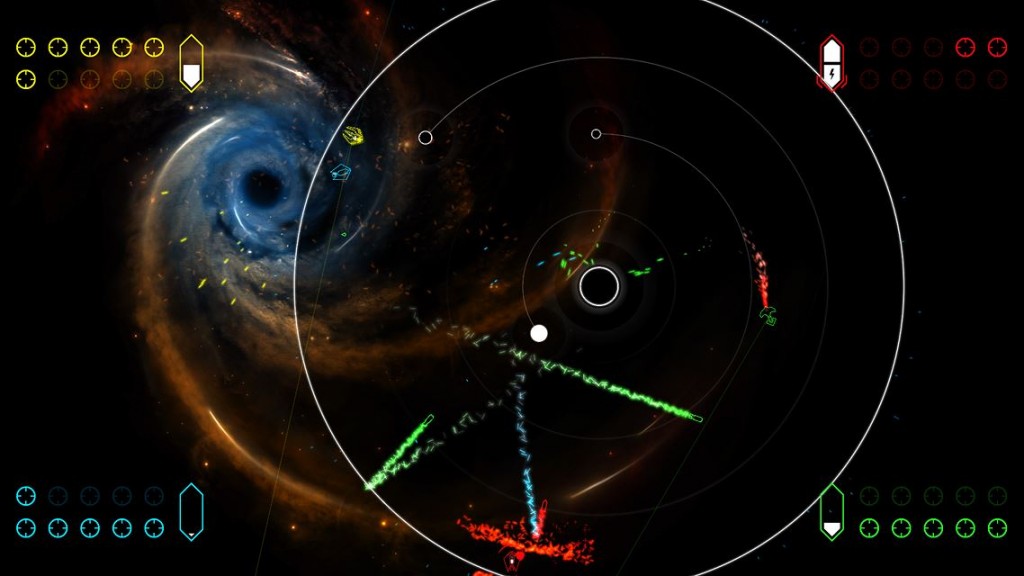 In keeping with the party spirit, Orbit packages these game types into a number of modes – Tournament, Mayhem, and Forge. Truth be told, they all follow the same pattern, by allowing you to select up to four rounds and jumbling up a combination of the game types on offer. Tournament mode keeps it simple by offering a no frills contest between the players, while Mayhem spices things up a bit with a few mini-games in between each round. Forge mode allows you to customize how you want to play, by giving you full access to all game types available and letting you choose which ones you want in your competition.

Bragging rights aren’t the only reason to go for gold in each round. Upgrades are available in the interim period between matches. You’ll be able to either negate gravity to some degree, make yourself invincible to your own missiles, and even increase your speed, a particularly useful addition during the destroy and annihilation rounds. As far as rewards go, that’s about as much as Orbit has to offer, aside from the usual list of achievements on offer for hardened Xbox One owners. It lacks any additional perks such as new ships or game modes, which in turn reduces replay value, further reducing this arcade-inspired space sim into not much more than a gimmicky party game.

The biggest problem is that Orbit restricts itself far too much. By focusing on local multiplayer, the game offers no online alternative whatsoever. Worse still, there’s absolutely zero opportunity to play solo in the game either. At least two parties must be present to play, but without the ability to add bots, Orbit becomes one of those titles that gets dusted off whenever you’ve a few friends round and you’re looking for something else to play in between FIFA matches and Mortal Kombat bouts. Perhaps single-player or online modes can be added with a simple update, but for the time being, Orbit just doesn’t feel like the full package.