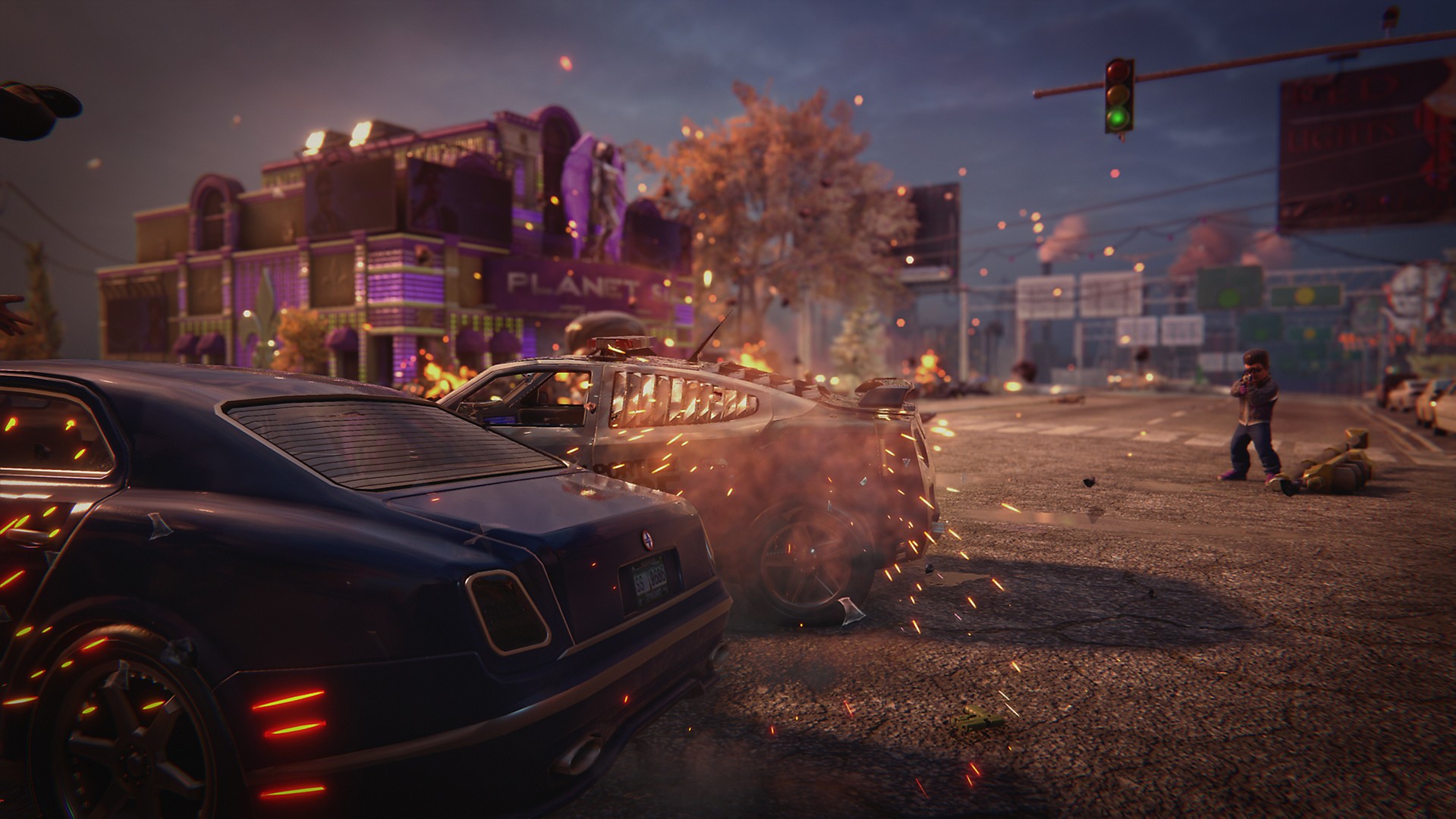 The Saints Row series started way back in the early days of Xbox 360, 2006 to be precise. 14 years ago is a hell of a long time in the gaming era and not only have we seen games evolve, they have also increased massively visually. If you’re not familiar with the developers Volition they are responsible for the early Red Faction games which were also fantastic video games. It was a joy playing them and recalling the first time you could have a destructible environment in a gaming world.

Fast forward to 2020 and Saints Row is now one of the best selling game franchises of all time with 13 million units approximately sold. Whilst this will nowhere near eclipse the Grand Theft Auto series, which is similar in terms of gameplay, genre and style, they gave it a damn good shot.

Now I am not quite sure why developers Volition and publishers Deep Silver decided they wanted to remaster the third instalment and dismiss the first two. I can hazard a guess that in terms of game quality, the third title packed a real punch in terms of the story and its overall content. It managed to push the boundaries of wackiness whilst retaining the realistic qualities. I was excited to learn that this hit from 2011 was returning in remastered glory. Not only would I get to play it through entirely again, but in a souped up version of the game.

Sadly though on console, using Xbox One X and Playstation 4 Pro, this game will only run at 30 frames per second. PC will allow you to go further than this but I’m unsure how far you can push the game on a gaming PC. This is a big disappointment, as with a remaster you’d expect them to push the console to its limits. Don’t let this put you off though, as if you’ve played this before you’ll instantly notice a huge array of improvements. If you haven’t played before, then you’re in for a real treat.

The most notable improvements you’ll see on screen is the lighting. Everything from the bright lights in the city, the traffic lights reflecting off the wet pavements to the high rise buildings showing off their brightness. I truly did see the game in a new perspective and I almost dismissed the fact it was running at 30 frames, as I was in awe that they made a favourite of mine insanely beautiful once more.

The game is almost a decade old and reading into the game, virtually all the visual effects of the game have been completely reworked and remastered. The remaster is being handled by a different team called Spearsoft whilst Volition work on future projects. It’s also useful for me to point out that all of the downloable content, which there are approximately 30 pieces of, are included within this remaster as part of the package. Whilst the price point may appear fairly high for a remaster if you’ve played it before, you are getting a lot of game for your money here. 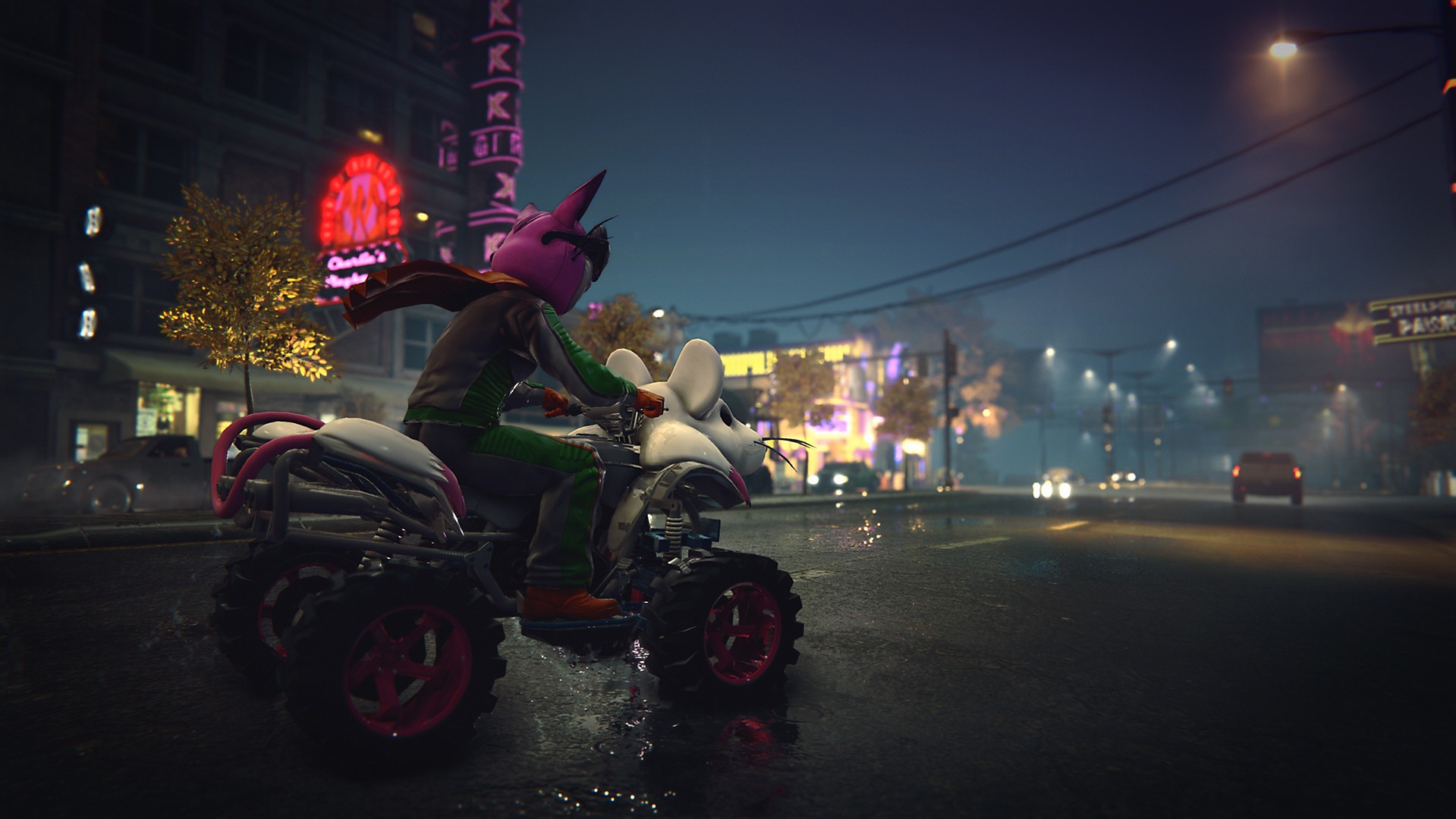 Saints Row The Third has an explosive start as it dives you straight into the events of the previous game. The gang members are well known across the globe and celebrities in their own right. The opening mission, you are taking part in a bank job. There’s quite a bit of gameplay here which will see you being forced from your home patch of Stillwater and setting up shop in the city of Steelport.

If you’ve played the first two titles you’ll expect more of the same here, as you’ll be fighting turf to turf attempting to capture as much of the land as possible. Before you head out though you’ll be asked to create your character. The game really shines in this area as the customisation options are exceptional. You can edit all the features of the body including the size of your genitalia if you’re a male, or your bosoms if you’re wanting to be a chick. This humour never stops throughout the game, for example the garages in the city are called Rim Jobs. You get the picture right? Sexual innuendos and adult content are galore in this experience and they are both incredibly funny and well executed.

You’ll be doing the standard set of missions that you’d expect, intercepting drug deals, escorting drugs and gang members, pimping out prostitutes and much more. What you’ll enjoy if you’ve played the first two but not this one, is the fact that the respect system no longer exists. Before you had to obtain respect in order to unlock more missions. Saints Row The Third bypasses all of this and you’ll be able to continue and play at your own pace. What Saints Row is really good at is not really caring, my meaning behind this is that it doesn’t take itself too seriously and that’s what makes it so exceedingly fun to play. I mentioned that the customisation options are fantastic and they really are, you could choose to play as a ninja, a knight or even have a giant bobble head. At one stage I went to the next mission on a broomstick Harry Potter style. There are so many laugh out loud moments and I’m writing this whilst smashing enemies across the head with a giant sex toy on a stick, so I absolutely would recommend sticking to the age restrictions on this one.

What surprised me is that the soundtrack seems to be retained, it is often a stumbling block with remasters as music licensing is increasingly difficult to keep hold off in future updates. There is a mission where you have to gatecrash a party at a rival gangs penthouse and as you parachute from a helicopter, music from Kanyewest’s hit “Power” is blaring out and it just adds a real adrenaline rush to the game. To get this song into the game back in 2011 would have been a great feat so to retain it is impressive, so bravo to Volition and Deep Silver here. The music and sound effects are spot on here and they blend into the sandbox open world so well. We have had other sandbox games such as the Mafia series which is great in its own right but the world feels somewhat empty. With Saints Row 3 there is still a huge element of exploration, you can can cruise around at high speeds listening to tunes whilst running people over, you can roam the streets and cause chaos or just use the world and its toys to go absolutely mental.

As you progress through the game and earn more respect missions will keep pulling through from three or four characters so that you can have variety in the jobs that you want to do. These are accessed through the characters smartphone and it is also here that you can upgrade abilities as you earn more money. A few examples include dual wielding weapons, faster health and stamina regeneration and more cashflow. It was an addiction in itself accumulating money to keep upgrading abilities, purchasing clothes, doing up vehicles and much more. Moving onto vehicles and their handling, the handling is sublime and on par with that of Grand Theft Auto titles, you can roam the streets and steal any vehicle in sight. You can choose to do this one of two ways, using the driver side door or you can swing through the window and boot the driver out of the car and take the wheel. Its the little touches and animations like this which make the game unique in its own way. 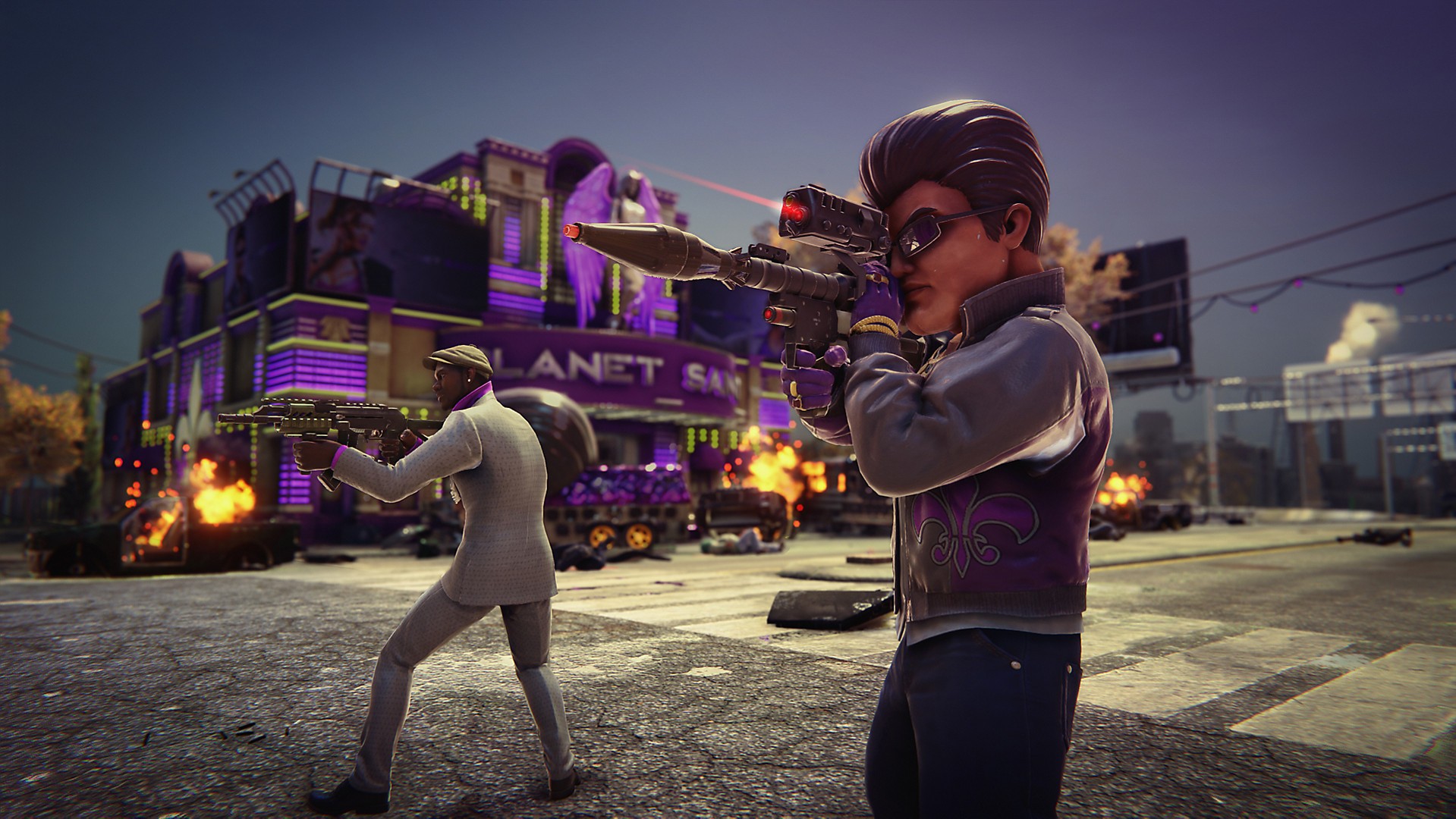 There are multiplayer options here in the way that you can summon a friend to play with online if they have a copy of the game. Its always welcoming to have a co-op game to play as the market is severely lacking in this field at the moment. Unfortunately, there is no option to play local split screen multiplayer as this has been stripped from the game since the original. Aside from the campaign there is also “Whored Mode”, I think you must be getting the hint of style of this game now. Essentially this is a horde mode in the Saints Row universe where you’ll start off killing ladies of the night and each round can throw something different with rotating weapon variables. This is a nice sidetrack to play with friends if you tire of the campaign mode.

There’s some exciting mini games thrown into the open world as well, if you’ve played the 2011 version you may remember insurance fraud. This mode would have you throwing yourself into incoming traffic to cause as much damage to yourself as possible to earn money from claiming insurance. Before you know it you’ll have been throwing yourself in front of cars for an hour laughing at the ragdoll physics that follow the collisions. There is a large amount of things to do in this world, even more so if you didn’t play the three expansion packs in the past which are included within this remaster. What is astounding with Saints Row The Third is that you can do mission after mission and it doesn’t appear to get mundane or boring. For some it may come across tiresome and never ending but each mission is different and whilst a lot of the enemies may look identical it doesn’t hamper the experience.

There are plenty of weapons to play around with and whilst I feel the gunplay is a little weak it can be satisfying dependent on how you want to play. Whether this is picking off each individual enemy or going all guns blazing that is your choice. It does become a minor annoyance when you are firing an SMG at enemies and they don’t die instantly. I feel that the gunplay could have been improved here or even better totally redesigned. It made up for things with the fact you can perform a running dropkick or throw someone off a bridge or into the path of an oncoming car.

My playthrough of Saints Row The Third Remastered felt like I was playing the game for the very first time again. It could have been the fact that it was a long nine years ago, but the tweaks and upgrades to this remaster make it display like a current gen title. Whilst its sad that the game doesn’t perform much better than 30 frames per second on Xbox One X, I don’t think there is a sandbox game that has managed this yet. Should you invest in Saints Row The Third Remastered? If you have never played before then its an absolute must buy and at the price point of £34.99 it is worth every penny. If you played the original nine years ago then it is the original game in shiny new visuals with all the additional downloadable content. I am glad I revisited Saints Row The Third again as it holds up exceptionally well even in 2020 and whilst it’s not Saints Row 4, I think we can gear up to something special in the next generation.

REVIEW CODE: A complimentary Microsoft Xbox One code was provided to Bonus Stage for this preview. Please send all review code enquiries to press@4gn.co.uk.

Saints Row The Third Remastered revives a true classic and gives it a new coat of visual excellence. A must have in your collection.