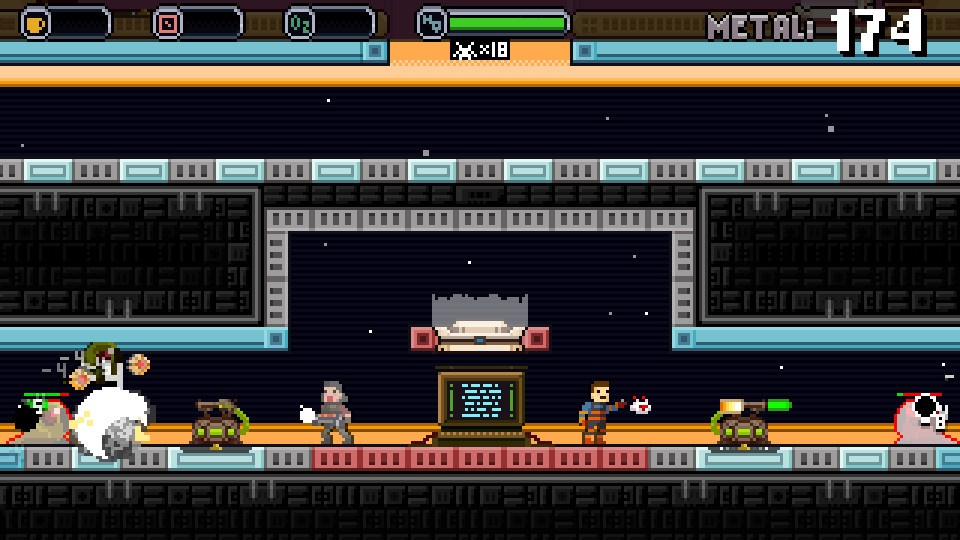 Classifying Spacejacked as a tower defence game seems a straightforward decision seeing as the game involves building turrets to defend your cores against waves of enemies. However while most games in the tower defence genre are cerebral affairs set across three-dimensional landscapes, Spacejacked bucks the trend with fast-paced action set in what looks like an old-school 2D platformer.

Set aboard a spaceship regularly besieged by invading aliens, Spacejacked sees you take on the role of space technician Dave Paprovsky. However while you might imagine the job description of a space technician would just involve fixing broken pipes and mending computers it actually turns out your main duties are building military turrets and shooting aliens with your trusty blaster. That’s right, in another deviation from traditional tower defence tropes you’ll find yourself in the heart of the action as the turrets by themselves aren’t sufficient to hold back the alien hordes and even building them requires you to be standing on a designated podium. 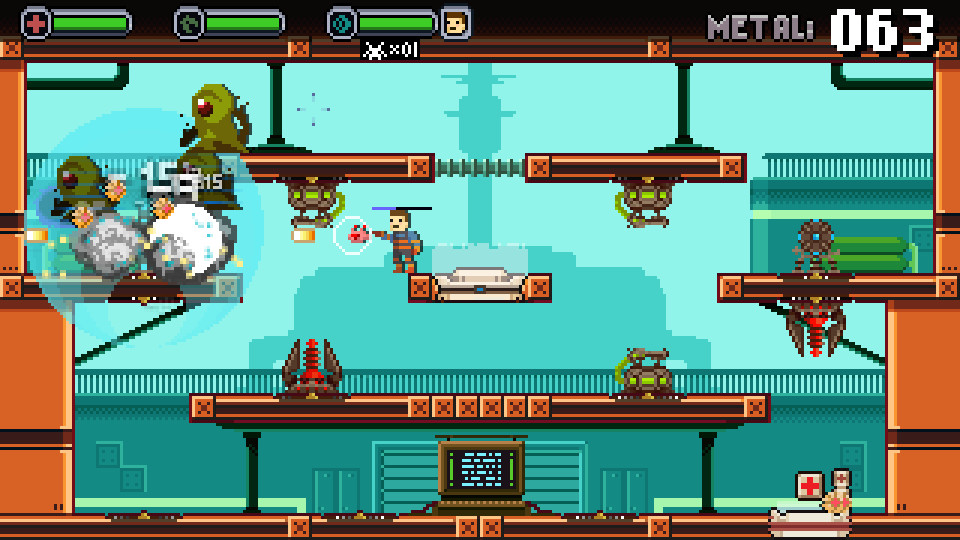 The slightly claustrophobic spaceship setting is also a key part of the game with every level limited to four rooms each of which is encompassed by a single screen. With retro pixelated graphics, platforms and a blaster that just shoots in front of you it could easily be confused as a platform game – although crucially without the ability to jump. This constraint is bypassed with Dave’s gravity-reversing boots which allow him to launch from floor to ceiling which is not only useful for navigation but also allows you to access extra build spots for turrets.

The pixelated graphics give Spacejacked a certain charm and actually reflect the tone of the game quite well as there’s a clear focus on action rather than strategy. While most tower defence games are wars of attrition which often give you the option to fast foward time that’s never a consideration here as levels are often over in minutes. Even when you die it only takes a moment to reload and get back into the action. In fact it’s fair to say that rather than being a tower defence game Spacejacked is actually a platformer with resource management aspects. And managing those resources is certainly key as you’ll constantly find yourself dismantling turrets in order to harvest those resources into building new turrets at the latest site of enemy incursion.

The frantic gameplay doesn’t give you any time to get bored, and although I usually prefer slower-paced games I found myself relishing my time battling aliens. The sudden spikes in difficulty can be annoying, to the extent that I often found myself dying several times on each level before breezing through once I found an optimal tactic for that level. However with the rapid restarts that isn’t too much of an issue. What is more of a problem is the lack of diversity as you continue to play with only the few rooms, three types of turrets and a standard selection of enemies to defend against. The main campaign lasts about eight hours, but while the first half is exciting and frantic it starts to drag towards the end. 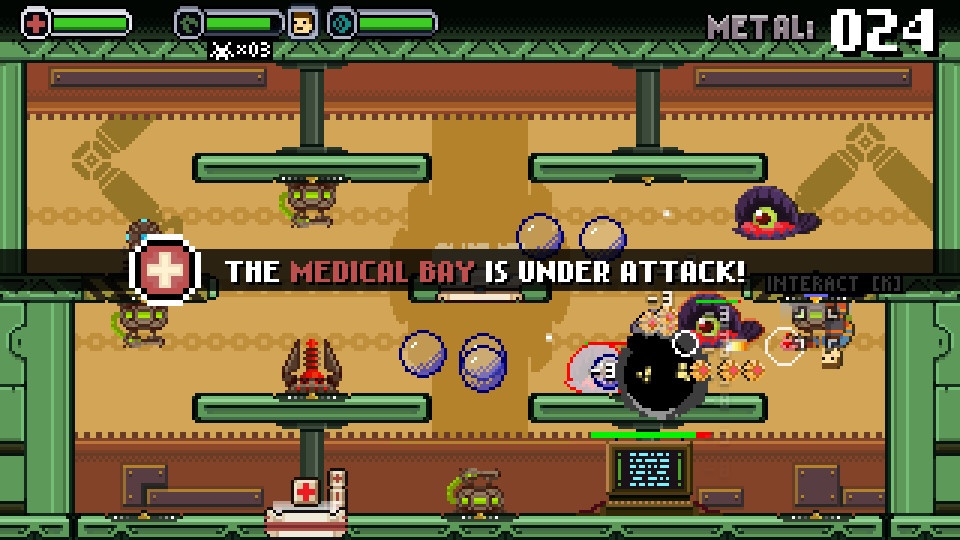 Spacejacked does try to liven things up as you frequently have to teleport between the various rooms to simultaneously defend against multiple alien waves, and there are occasional interludes between levels where you get the chance to engage in a simple side-scrolling mini-game in an attempt to win extra resources. The endless mode option provides a chance to really hone your skills but unless you have friends to compete against for high scores doesn’t offer a long-term appeal. That’s where the challenge mode comes in and it’s here where you’ll find more longevity with the various scenarios offering a real change of pace.

It may not be the most technically impressive game but the frantic gameplay and just plain fun tone makes Spacejacked easy to recommend. With instant building of towers and no resource loss when selling there’s an emphasis on gung-ho action with no worry about failure. This does mean there’s not the usual sense of tension you’d expect from a tower defence game but that sums up Spacejacked quite well – it’s for gamers who want some tower defence tactics distilled into a few minutes of action.