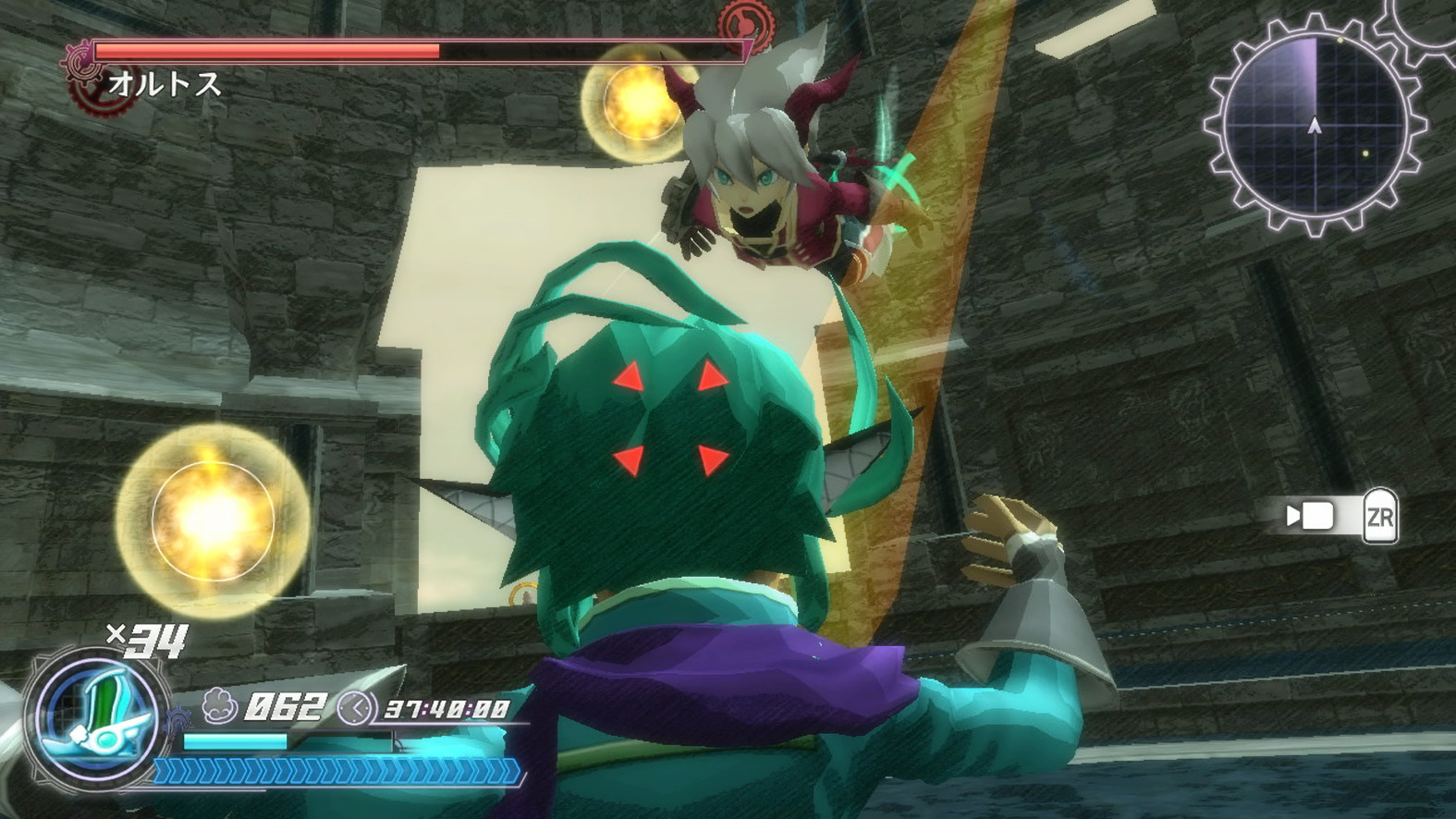 If I were to pitch this game to anyone, it would prove to be one really hard sell. Essentially, what we have here is a Wii game; designed for the Wii and tailored to Wii controls. Unfortunately, due to a turbulent development period, Rodea: The Sky Soldier was indefinitely delayed until eventually there was no point releasing it on the Wii. So what did developers Kadokawa Games do then? Easy; they gave it an HD lick of paint and unceremoniously crammed it onto the Wii U. The result of which is a mixed bag, to say the least.

You assume control of Rodea, the titular Sky Soldier, as he strives to stop the evil Naga Empire from conquering the peaceful floating continent of Garuda. What follows is an admittedly well fleshed-out twenty-five chapter campaign complete with cut scenes, boss fights and utterly dreadful voice acting. It isn’t entirely self-aware, but the story just narrowly avoids being totally cringe-worthy at every turn thanks to the light-hearted script.

To play, Rodea: The Sky Soldier is one strange piece o’ chicken. It comes from the same creative mind as Sonic the Hedgehog and Nights into Dreams, which is coincidently the best way to describe what the gameplay experience is like; Attacking enemies with your jumping homing attack and using launch pads to zoom along the ground makes you feel like you’re playing a 3D Sonic game, whereas taking to the skies and collecting pick-ups for big multipliers really tries to capture the essence of a Nights game. It still retains an identity of its own though, most accurately summarised as a light-hearted action/adventure game with an emphasis on aerial combat and exploration. 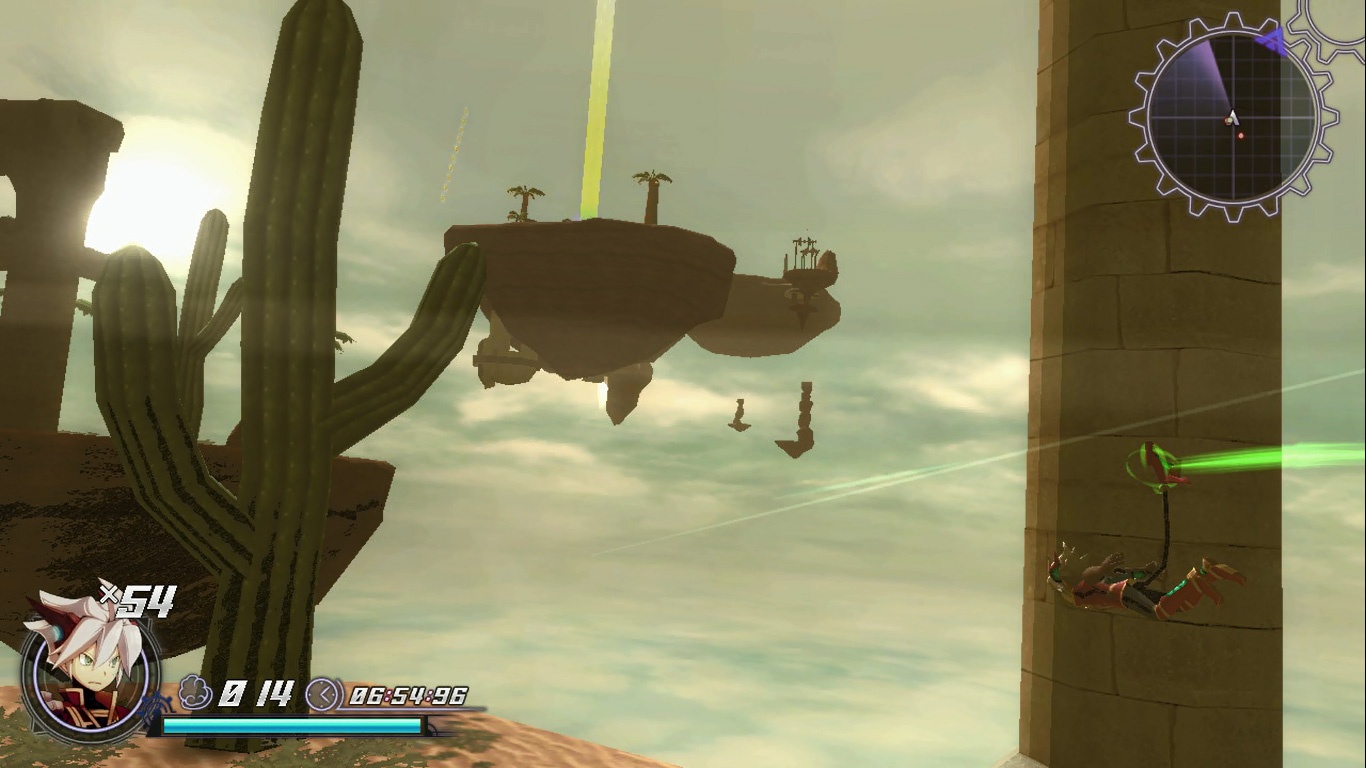 It sounds just grand in theory, but the disappointing truth is that Rodea is a frustrating ordeal for the most part. One of the biggest issues is with the controls. The original idea for the Wii game was that you used the Wii Remote to point in the direction you wanted to fly. In this version though, you use the control stick to move a reticule around the screen and press A to fly to the next solid surface. It works, to be sure, but feels really dull and much less interactive. Shameful really, as the gamepad could’ve been used to introduce some form of motion control or… something at least. You can use it for off TV play but other than that, the controls are completely traditional.

In fact, when in the thick of it, there are glaring faults in almost every gameplay mechanic employed by Rodea. To use a more recent comparison, the flying is very similar to Gravity Rush on PS Vita, but isn’t executed half so well. There’s a meter that indicates how long you can fly but you’ll find that it rarely runs out. The problem is with the flying itself; most of the game requires you to fly but fails to recognise that it’s very little fun. Most of the time, you’ll find the camera has seizures if you take flight next to a wall or something and when Rodea rebounds off a solid object, he’ll jump off at awkward angles that’s just disorienting to keep up with. Hoofing it along the ground isn’t much better either when you’re exploring the mostly barren levels. You can dodge attacks but when you jump, you’ll travel so far you’re like to fall clean off the edge of any platform.

Still, there’s a welcome RPG element where you can collect materials by defeating enemies and use them to upgrade your stats and abilities. This somewhat dulls the razor edge of frustration because you can travel faster and take more damage, but there’s just some things a huge health bar can’t help. Take the terrible shooting for example; once you progress through the first few chapters, you get a machine gun arm to use against the increasingly ridiculous looking Naga troops of flying fish, crabs and other absurdly unthreatening creatures. Rodea auto aims for the nearest enemy and gives you practically zero control of where you shoot. Sometimes the idiot will fire directly off-screen instead of an enemy in your perceived line of sight. Either that or he’ll fire harmlessly at an almost invisible enemy behind a brick wall. On top of that, the gun starts off as a useless pea-shooter and only becomes half helpful after you upgrade it a bunch of times. 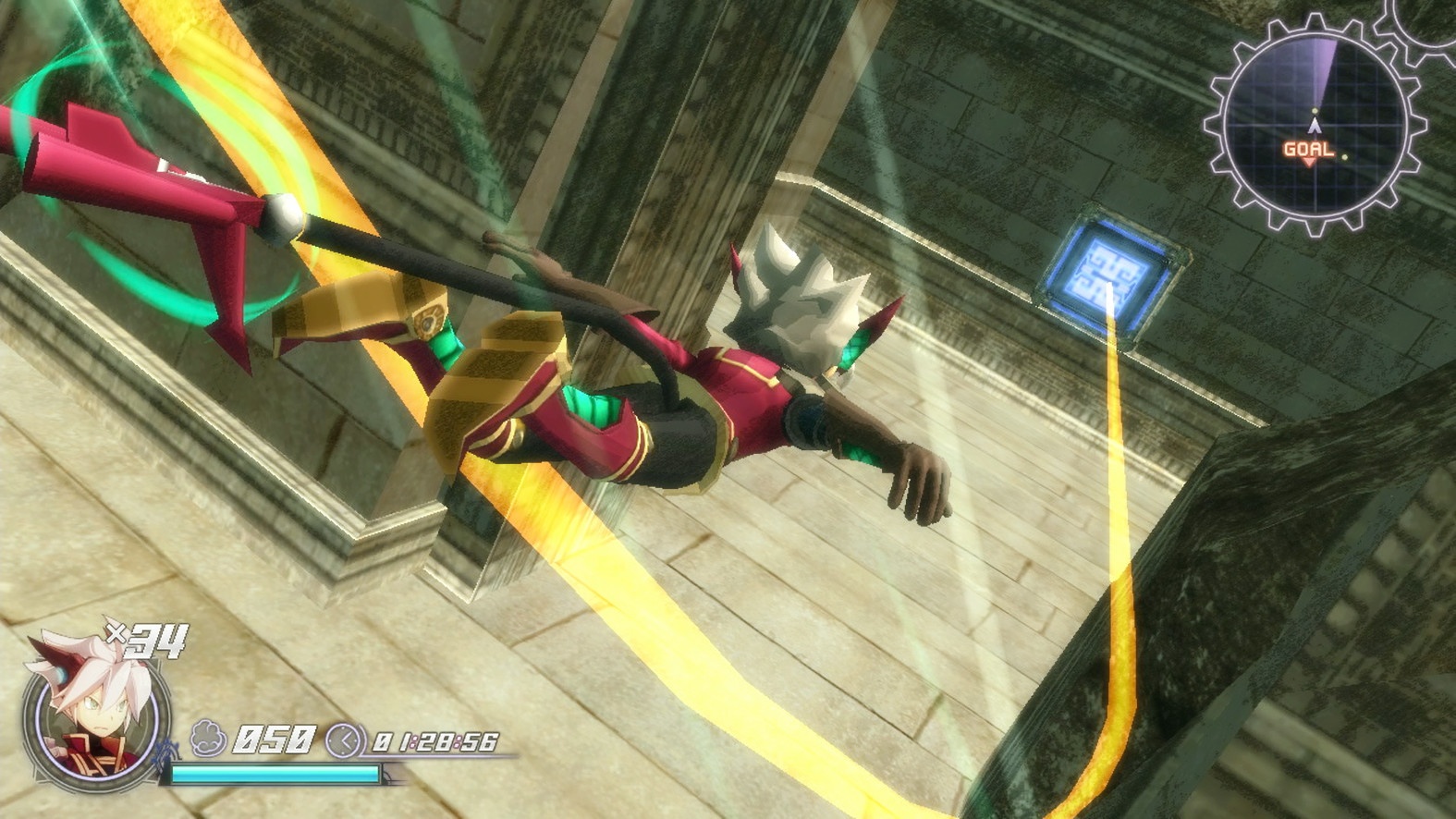 It only gets worse I’m afraid. Rodea: The Sky Soldier is a game that was supposed to be released years ago on a less capable console and that becomes all too apparent after numerous hours spent playing it. There’s noticeable slowdown when the action gets hectic and the poor draw distance hinders your flight throughout. Additionally, the gameplay feels dated and the graphics just aren’t up to scratch for a Wii U game in 2015. To see the game finally released in some form is great for the developers considering the work that went into the initial product, but to see it released with a full price tag on an HD console just doesn’t cut the mustard with me.

However, I couldn’t confidently say that there’s absolutely nothing to like about Rodea; the character design is quite good and there’s at least a pretty art style that thinly veils the otherwise poor graphics. Also, when the flying is uninterrupted, it can have its moments and actually be quite graceful. Yet the sad conclusion is that this is just an old game on a new console, and not even a particularly good one at that; almost every facet of the gameplay, while not broken, is either flawed or archaic. It would be harsh to call it a mess, but Rodea: The Sky Soldier is an utter disappointment with brief glimpses of a good game smothered by poor design choices and a long and ultimately damaging development time.