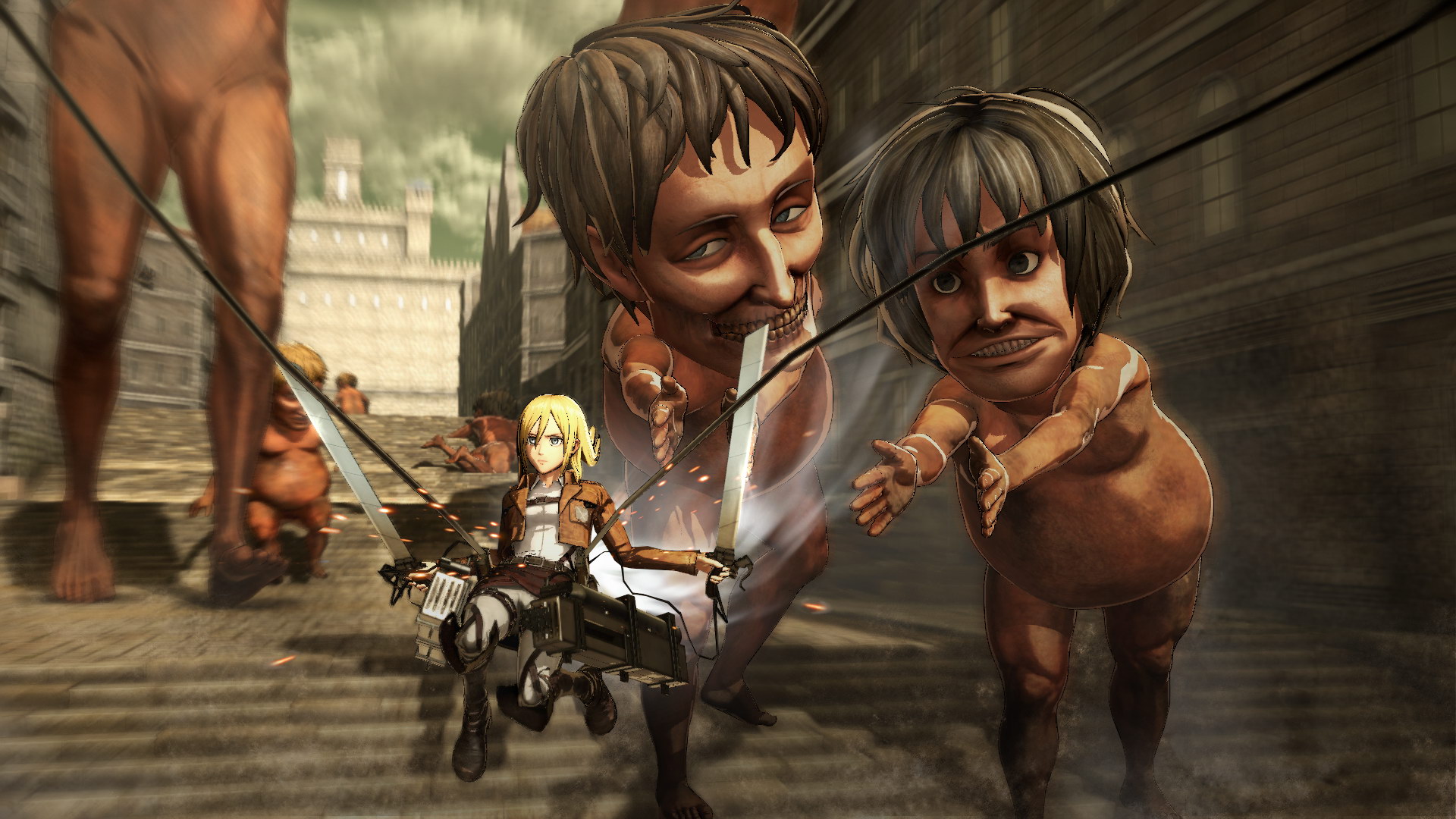 My major concern when it came to, Omega Force’s take on the wildly popular anime and manga series, Attack on Titan, was whether they would be able to capture the majestic, often balletic combat of the series, whether they would be able to translate that into an effective and engaging gameplay experience. Well, I’m glad to say that my worries were completely unfounded; even on the relatively underpowered, PlayStation Vita, Attack on Titan: Wings of Freedom’s core gameplay is an absolute joy. A bizarre cross between Crackdown, Spiderman and Bionic Commando, Wings of Freedom absolutely nails both movement and combat.

Sadly, while the fundamental gameplay is an unmitigated success, the rest of the game leaves a little more to be desired. Don’t get me wrong, this is a consistently enjoyable experience, it’s just that, after getting the gameplay so right, it makes the games’ occasionally odd design choices, often slavish faithfulness to the source material and lack of variety all the more disappointing.

At this point, I’d usually give the uninitiated a quick run through of the set-up, but come on, the majority reading this have probably watched the anime / read the manga, and honestly, I’m not going to subject them to another re-telling of the same story –  especially when the game is so keen to do that itself. Now, I’ve got nothing wrong with a videogame adaptation re-telling the story made famous by the source material, but it’s done so uncompromisingly here, that it’s actually detrimental to the overall experience. Beyond telling the exact same story almost verbatim (something that leaves absolutely zero room for surprises), its commitment to including playable characters in line with the show essentially breaks the levelling up system.

While fans will appreciate the chance to play as some of the series’ ‘lesser’ characters, having them forced upon you later in the game when you haven’t had a chance to level them up in line with the likes of, Eren, Mikasa and Levi, can lead to an unnecessary grind. Again, I appreciate the want to stay true to the source material, but if you are going to have all of these playable characters, you really need to give each of them a fair crack of the whip…..also, an occasional break from Eren’s relentless moaning in no bad thing. 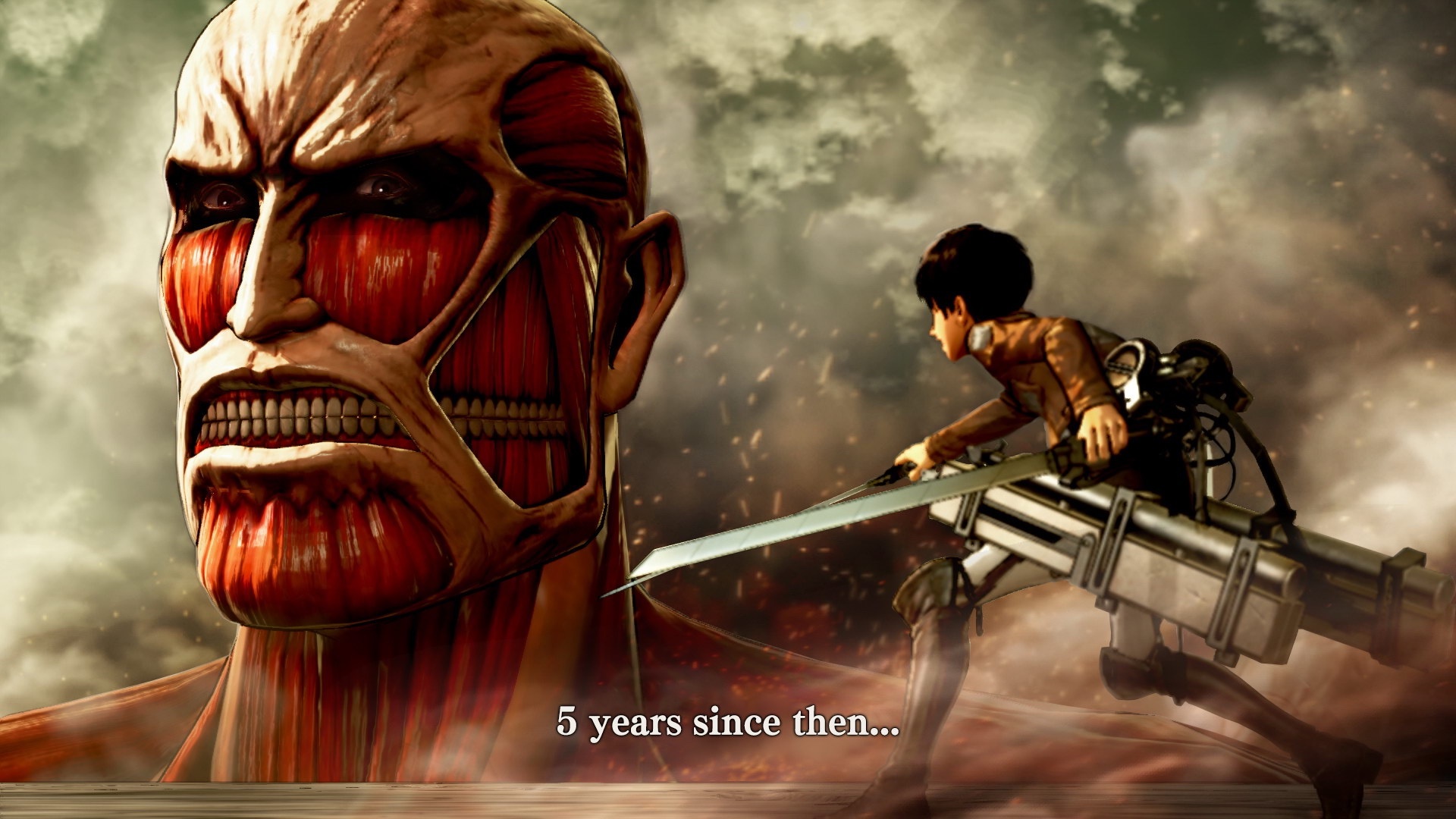 The same issue rears its ugly head when it comes to mission design; with the story and subsequent combat of the manga and anime all geared towards killing Titans, the same is very much true of the videogame adaptation. While that is to be expected, it leads to a game with very little in the way of variety. Yes, taking down Titans is awesome…really awesome, but during extended play, it can begin to lose its lustre (heck, even ice cream can make you feel a sick if you eat too much……or so I have heard). In fairness, there are a few missions in which you need to escape that rather pacey female Titan, save your comrades from getting themselves devoured and even take control of your own powered-up super Titan, but for the most part, it’s a simple matter of killing the same standard Titans and clearing the map. The annoying thing is, that lack of variety feels totally avoidable. There are hints of it throughout the game, but because of the commitment to the narrative, you soon find yourself completing the same old mission over and over again.

That probably sounds rather negative, but despite these issues, despite the lack of variety, the inconsistent levelling and the complete insistence on following the narrative of the TV show, Wings of Freedom remains a hugely enjoyable experience and a great start to what one can only assume will become a long running and highly successful series. Much of that success comes down to the aforementioned combat. Despite a somewhat cumbersome control scheme, Omega Force have absolutely nailed the movement and feeling of attacking a 50ft tall Titan. It’s slick, fast paced, and in many respects, quite unlike anything else out there.

Despite the Titans towering over your comparably tiny heroes, your ever present Omni-Directional Mobility Gear ensures that you can deal with the threat while traversing at great speed across the games’ collection of large scale stages. Traversal alone is a huge amount of fun with a single button press throwing you across the screen like you’ve just been shot out of a horizontal bungee or a high powered sling shot. Much like the best Spiderman games out there, your weight and control in these situations feel just right, and while upgrades ultimately have a limited effect on your abilities, moving through the trees as your charge toward your titanic targets remains fun from beginning to end.

The same is true of taking down the Titans themselves. While they range in size, defeating them is a matter of taking out their appendages before striking at the weak point at the nape of their neck. You’ll have to be quick too, as just like the show, those limbs grow back if you don’t finish them off in time. Beware though; go for the kill too early or get too close to your enemy and your likely to get yourself eaten. You usually have a chance to escape by hacking at your captors’ fingers, but still, best to stay away from their mouths…..those Titans be bitey. 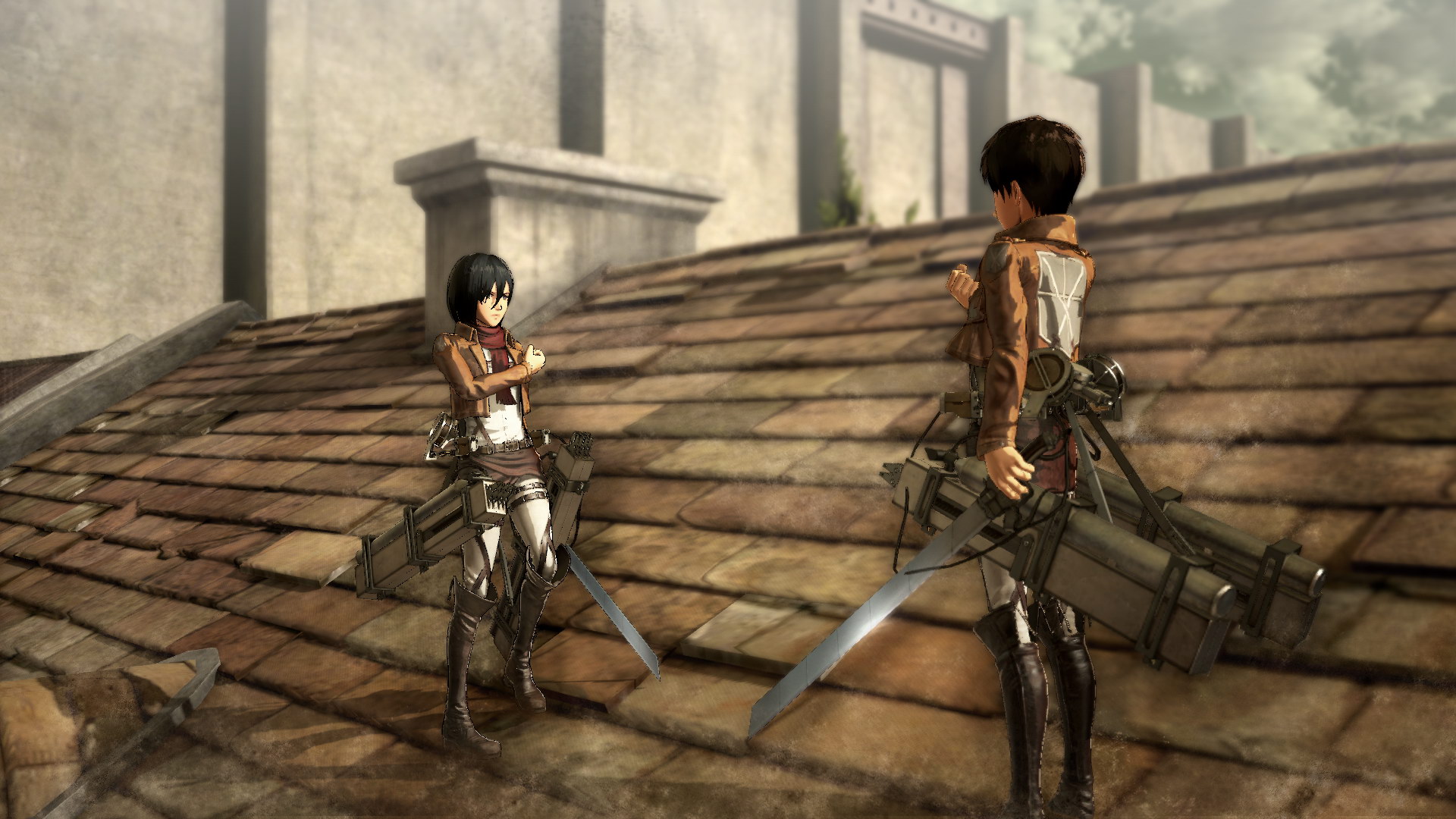 Like traversal, this process of weakening Titans before taking them down never really evolves, and despite their size, the process remains mostly unchanged – hack limbs, attack nape, repeat. Some will likely take issue with this (especially given the limited effect of upgrades), but in terms of moment-to-moment gameplay, I for one found it consistently exhilarating. Keeping an eye on your fuel levels and the sharpness of your blades adds a much needed level of strategy and managing crowds of Titans, well, it never gets old. It really doesn’t.

As much fun as the game is though, it should be noted that this is a review of the Vita version, and while the content and gameplay remains largely the same, there are technical deficiencies that make this version notably weaker than its console counterpart. For the most part, this is a good looking game, and judged on its own merits, is actually rather impressive for a handheld game, but beyond the reduced detail and blander environments, it’s the pop-up that ultimately causes major problems. Whether it be the environments, or more often than not, enemy Titans, having them pop up on screen at the last moment can really break the immersion, and above all else, throw you into some unduly dangerous situations. It’s still a decent looking game, but there is no getting around the detrimental effect of these technical deficiencies.

Despite its misjudged insistence on following the narrative of the anime to the letter, its disappointing levelling system, the lack of variety and the technical deficiencies inherent to the Vita port, Attack on Titan: Wings of Freedom remains an immensely enjoyable take on the ever popular anime. From the fantastic traversal to the brilliant combat, Omega Force have done an admirable job of transitioning Attack on Titan’s kinetic, high speed action to the world of video games. I’m sure the inevitable sequel will iron out the kinks, but as it stands, this remains an admirable and largely successful translation of the source material.