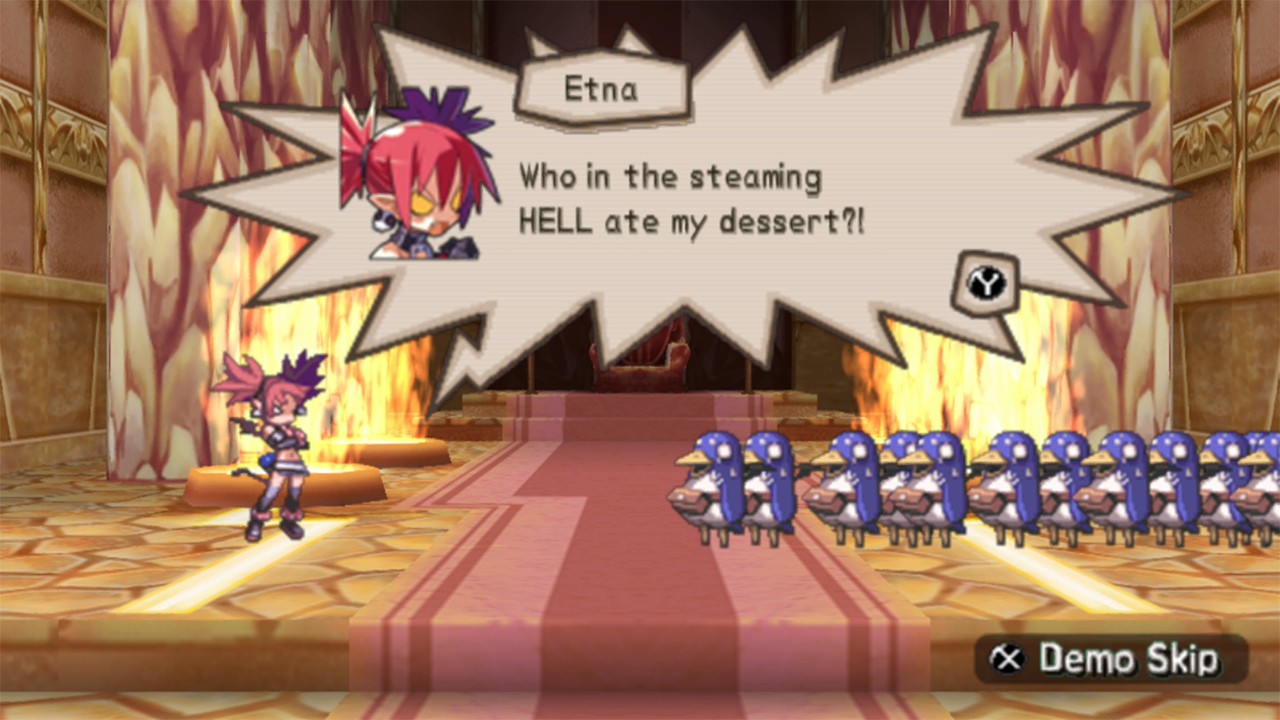 Prinny’s are one of the best mascots the world has ever seen, and I will actively fight anyone who says otherwise. Penguin-esque beings who are the souls of criminals, trapped in servitude for almost all eternity, talk like bizarre surf punks and have a tendency to explode: what’s not to love? They were in the first Disgaea game, they’ve been at least somewhat relevant in every subsequent game (and such a huge part of Disgaea 4!), they’ve made countless cameo appearances in other titles, and my wife gave me a homemade one as a present years and years ago. I knew that the Prinnies had their own games, but they were on the elusive Sony handheld systems, which I classically haven’t really paid attention to. Thankfully, NIS is bringing the titles to the Nintendo Switch, and players around the world can now enjoy the absolutely PUNISHING world of being a Prinny.

The first title is Prinny: Can I Really Be the Hero? The game itself has a fairly nonsense plot, but it fits in well with everything else about Disgaea. It takes place around the land of Etna, one of the major demon characters who appears in every game (hopefully in the newly announced sixth one as well!), and Etna is having a bad day. Someone, somehow, ate her Ultra Dessert, and she is PISSED. Throwing exploding Prinnies everywhere pissed. Naturally, she tasks the Prinnies to get her a new Ultra Dessert, and they have twelve hours to do so before she destroys them all in a fit of rage. The Prinnies are apprehensive: because of their self-destructing nature, it doesn’t seem like they’re viable to go out and perform a rescue mission. Etna solves this by bestowing a magical scarf upon them that makes them less explosive, allowing them to move about, climb, jump and slam without fear of immolation. Now without an excuse, the Prinnies set out – with one involuntary Prinny as the leader – to make a brand new Ultra Dessert from scratch in 12 hours. Should be easy…right?

Prinny: Can I Really Be the Hero? is a fascinating game in terms of setup and execution. The title is designed to be difficult as an adventure platformer and does so with a three step approach. Firstly, the controls of the game are purposely a bit more “old school” and harder to deal with. Perhaps emulating the inherently stiff nature of a penguin with two peg legs, the Prinny doesn’t move gracefully in any nature. Jumps without walking are straight up and down, no changing course or direction. Momentum can’t be reversed in midair, and it’s hard to fine tune a jump to land on a precise spot. The way a Prinny moves really calls back to the times when gaming was bound by very stringent laws and, as such, resulted in a lot of awkward landings and falling to one’s death due to miscalculation. Players who are used to smooth, responsive controls need to beware: this one is a pain. 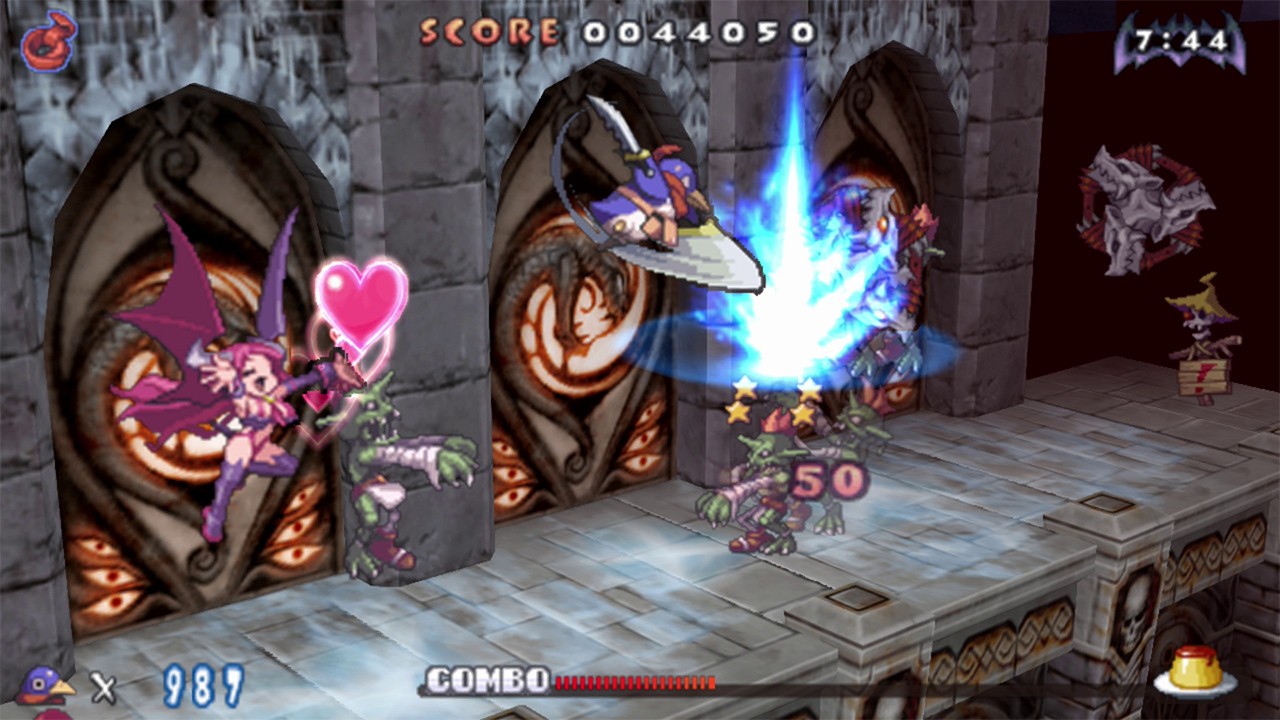 Secondly, the Prinny is still very much vulnerable, particularly if you choose to do the higher difficulty level. On normal, you can take three hits before exploding. Hard dictates that a single hit is death, and that means lightly touching an enemy or brushing up against a spiked/flaming surface spells the end for you. While this might not seem like a big deal, you have to understand that this game is crafted – with loving, spiteful intent – to take your lives. While not impossible, the levels, even from the very beginning, are set up with victory conditions in mind and stringent failure positions if you are unsuccessful. To put it bluntly, this game is tough as shit, and it revels in being that way.

Thirdly, and perhaps most telling, are the number of lives you have. Prinny: Can I Really Be the Hero? is a hilarious misnomer, as there isn’t one Prinny being the hero. Instead, you have a reserve of a thousand Prinnies, and each time you explode, a new one is ready to take over the mantle (almost literally) and lead the charge. This seems like overkill until you actually get into the game and you realize that this is no mistake. Every boss fight usually takes a few to figure out what you need to do in order to survive. If you’re on hard, you’ll take approximately fifty just to get through the first stage, and there are several that you need to experience, each more difficult than the last. There is one exchange in the Magma Hideout that took me over thirty lives just to get from one save point to another because the madness was so tight and real. If players have the wherewithal to do it, the game can absolutely be finished without running out of lives, but there is incentive if you do: a new game mode gets unlocked for successfully wasting 1000 Prinnies, and that alone might fuel the journey into madness.

Here’s what you should know: this first Prinny title is incredibly difficult, maddeningly fun and short in the sense that mastery is possible to decrease the game’s run time to less than an hour with serious dedication. Without it, you’re left with a game that throws everything and the kitchen sink at you. Decisions need to be made about what enemies NEED to be killed, which can be avoided, and which will come back to haunt you without proper maintenance. The ninjas, in particular, are tenacious assholes, though a succubus left unchecked can ruin your day. The game’s tone is always upbeat and fun, with a jazzy soundtrack and some excellent sound bites and clips to keep the air fresh, yet you need to know the horror that awaits you, because goddammit it can be hard. 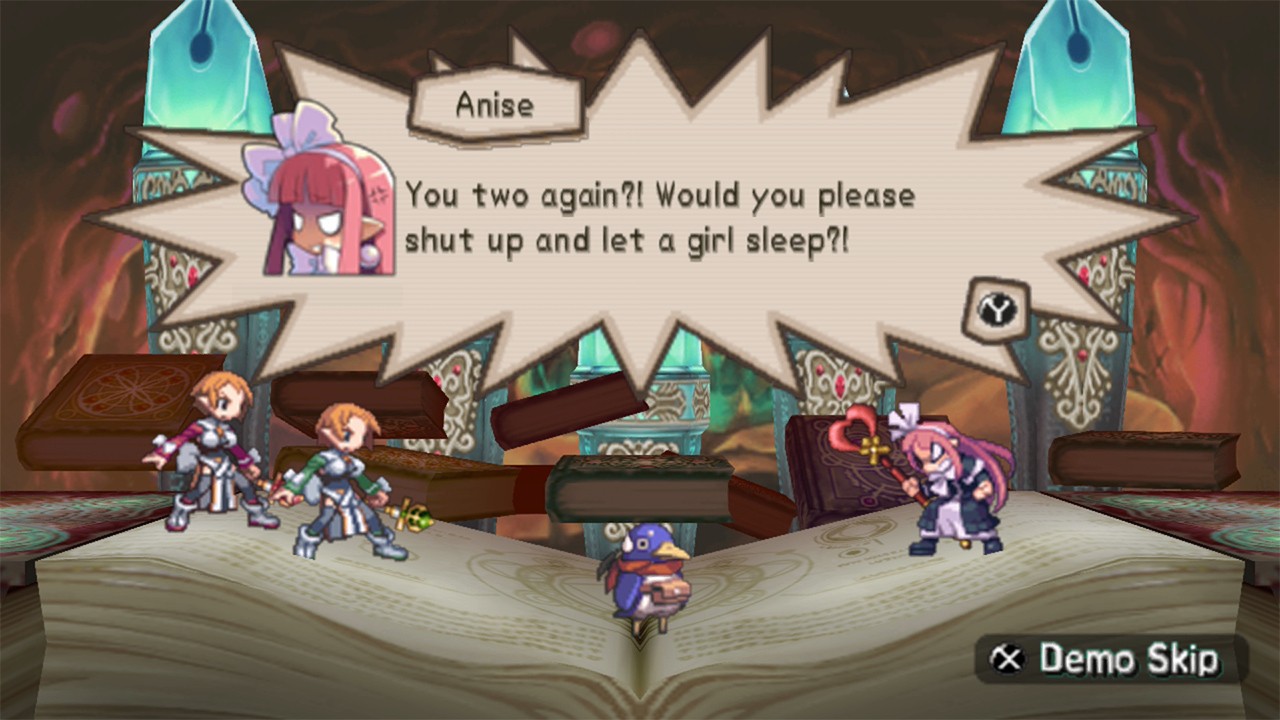 Thankfully, we also have the perennial Disgaea humour injected throughout, and players need to note the excellent English and Japanese voice acting. The Prinnies know they’re on a suicide mission, and they face it with the same “it’s a living” as a Flintstones dinosaur appliance. The bosses are all alive with the same energy and ridiculous nature that the rest of the Disgaea universe possesses, making the flirty catgirl, the married bone dragon comedy twins or the Australian zombie natural fits to the overall nature. Plus, it helps to underline the insanity of this very quest. Someone ate someone’s dessert, and hundreds will die in order to make it again, even though the ingredients appear to be a soiled diaper, a bone, a voodoo doll and other non-foods. If you manage to actually get to the end of the game, the craziness only ramps up as you add Extra modes. It’s one of those beautiful additional moments of old gaming, where all of a sudden there are these things no one told you about that exist, and now you can deal with this extra bull that you didn’t know was present.

That’s what makes Prinny 1 shine as a game: the extras. Most players will do the order of the levels from one to seven the first time through, getting the standard ending and seeing the standard credits. But the timer you’re operating under isn’t just for show: it actually affects the game. Like, playing the levels in different orders gives them different appearances and even different difficulty levels. Bosses may or may not appear based on your approach. Unlockable items are hidden throughout, but you can’t necessarily find them the first time through or even the seventh, and it’s such a joy to see this in a modern game that appears so unassuming. I kept playing it over and over to see what the Moab Fortress looked like at all points, and also to unlock more game modes and to find extras.

It’s a wonderful thing to see more and more PSP titles ported to the Switch (and Vita titles), because most Nintendo players won’t be aware of them. It’s even better to take a break from all the visual novels that come over to see something truly explosive and exciting, a genuine hardcore title that most players have never seen on the big screen, and now’s your chance. Yes, Prinny: you really can be the hero. You’re a damn fine one, and hardcore players everywhere take notice: this dood is legit.

Prinny 1: Can I Really Be The Hero? Review

One of the best, most brutal platformers I’ve played, and the fact that it’s helmed by the best mascot ever only makes it infinitely better.