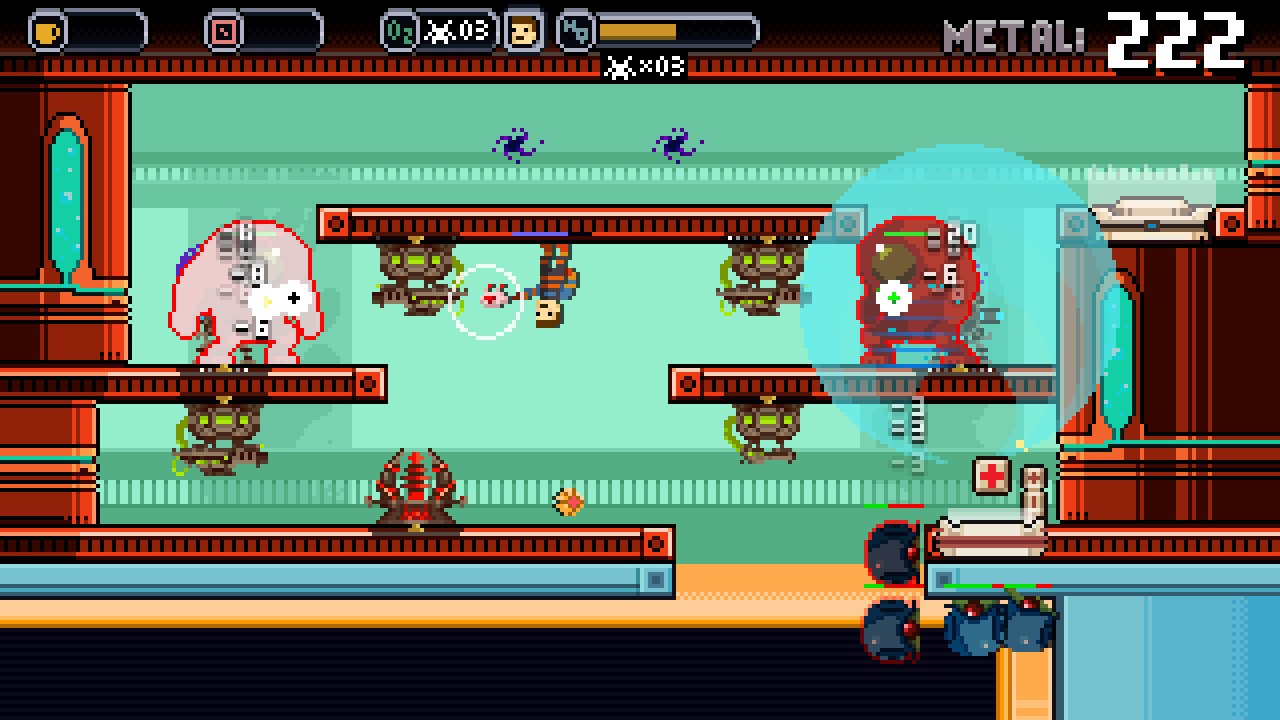 Everyone has a friend called Dave. He’s usually hard-working, honest, and will do anything to help out. Luckily, this can apply to our space travelling friends in Spacejacked. Dave the technician is called upon to help both Scott and Revy with their individual problems on their spaceships. Namely, they are being overrun by the presence of marauding aliens, and they want you to remove them any way you see fit. Spacejacked has been developed by Rotten Mage and is published by Ratalaika Games. This fast-paced arcade tower defence game has you controlling a rather dry and witty one-line obsessed technician named Dave. Dave is tasked with protecting each spaceship from being overrun by aliens as it prepares to warp into hyperspace.

As you load into the game you are shown 4 different gameplay options; Tutorial, Story, Endless and finally Challenge mode. All are greyed out except the tutorial option. This forces you to play the game as the developers intended, and makes sure that you get to grips with the basic gaming principles before you are chucked in at the deep end. In this mode, you will learn how to navigate the world, shoot your gun, but most importantly, you will understand how to place and upgrade your static defences. You are introduced to the importance of the metal resource, and finally, you are shown how to teleport. Once you have learned the ropes you are thrown straight into the action.

The main game is split into 2 distinct parts, each with a number of unique characters, none more important than Scott and Revy. They are the owners of the ships which you are being asked to safeguard. Each vessel is broken down into numerous rooms, the Headquarters is the key one as it contains the precious ship’s core. If the aliens get their green tentacles on it, and destroy it, then it’s game over. Each section has a variety of locations where static defences can be placed, as the action shifts to different areas, these can be removed without penalty to your limited resources. The only thing that you’ll need to do is be quick and plan ahead. Time is extremely short, and wave after wave of attacks happen as if the alien tide is coming in. 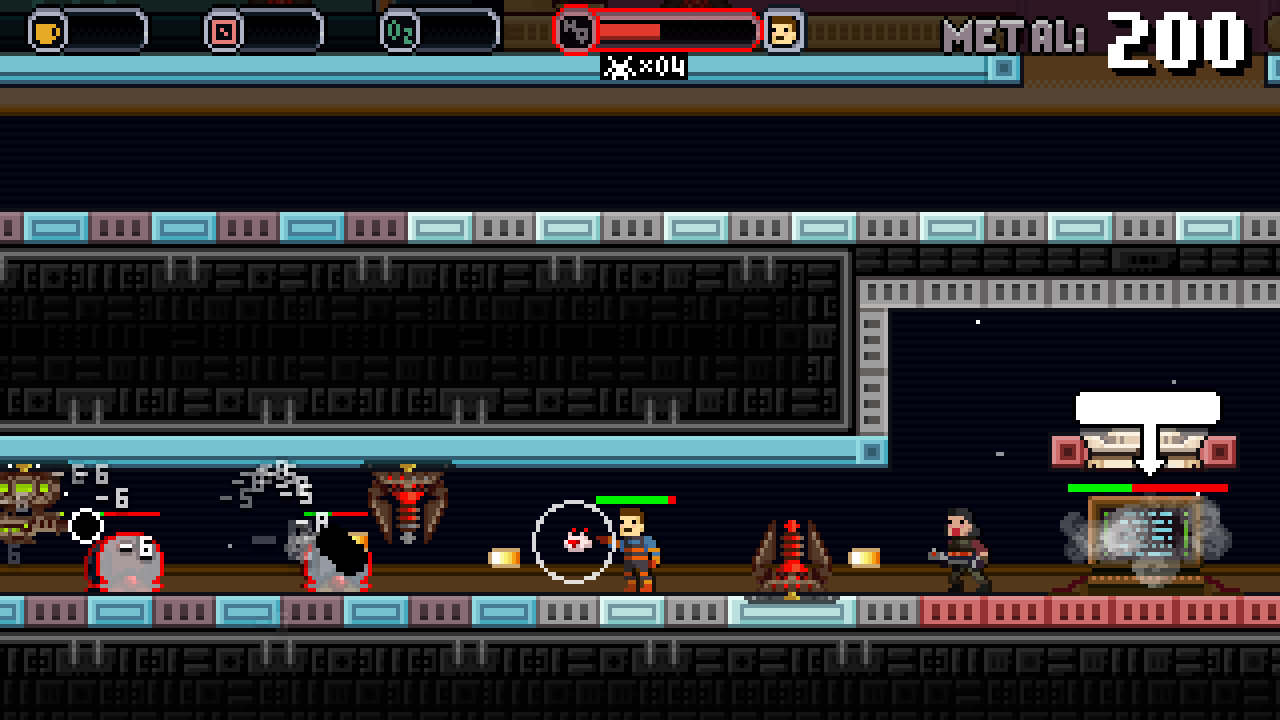 As your foes are slain, they will drop precious metals for you to collect, these can then be spent on repairing the core, buying more defences, or upgrading existing facilities. The choice is entirely yours, and each situation will demand a different approach in order to be successful. The owner of each ship will help you to defend the core, but you have no control over what they do, so don’t rely too heavily on them to assist you in your task. The final 2 modes use the same gaming mechanics found in the story, however, the endless option does differ slightly. It acts as a non-stop horde scenario, where you must decide the best way to survive every onslaught that you encounter. Whatever progress you make is recorded to a Leaderboard, and you can compare your success or failure to any of your friends who have tried to complete the task. The challenge option has been designed for the most hardcore of fans, you must take on set pieces, and win in order to succeed. This is agonisingly difficult, and will guarantee to make you; Scream, rage quit, or quite possibly both.

Presented in a retro pixel art form, Spacejacked would feel more at home on a Mega drive than an Xbox One. For a number of gamers this dated look may not be to their taste, but for me graphics aren’t everything, and I liked how the game looked. The action is smooth and steady, and the character models work well within the world they were created. Both ships that you visit have distinctive looks, and each of the rooms has a unique decor. The alien models are interesting to look at, and each can easily be identified from another. This is key as it makes it much easier to plan your approach with each wave of enemies that you take on. There is no audio dialogue, and all the narrative is presented in a classic white bubble. Our protagonist is a man of few words, but when he does speak its reminiscent of a hero of a Western film. It’s a dry and witty delivery, which cuts straight to the point.

The audio has been approached in the same vein as the graphics, 8 bit sound that would have accompanied the early 90’s gaming has made it to the forefront again and works well with the theme and genre. Classic Sci-fi sound effects are utilised alongside the weaponry, and an upbeat tempo matches the pace of the action that takes place on the screen in front of you. Though the audio won’t win any awards for creating something that is unusual or new, it works brilliantly with this theme and story. The team that compiled all the sounds should be proud of how well it supports the action. 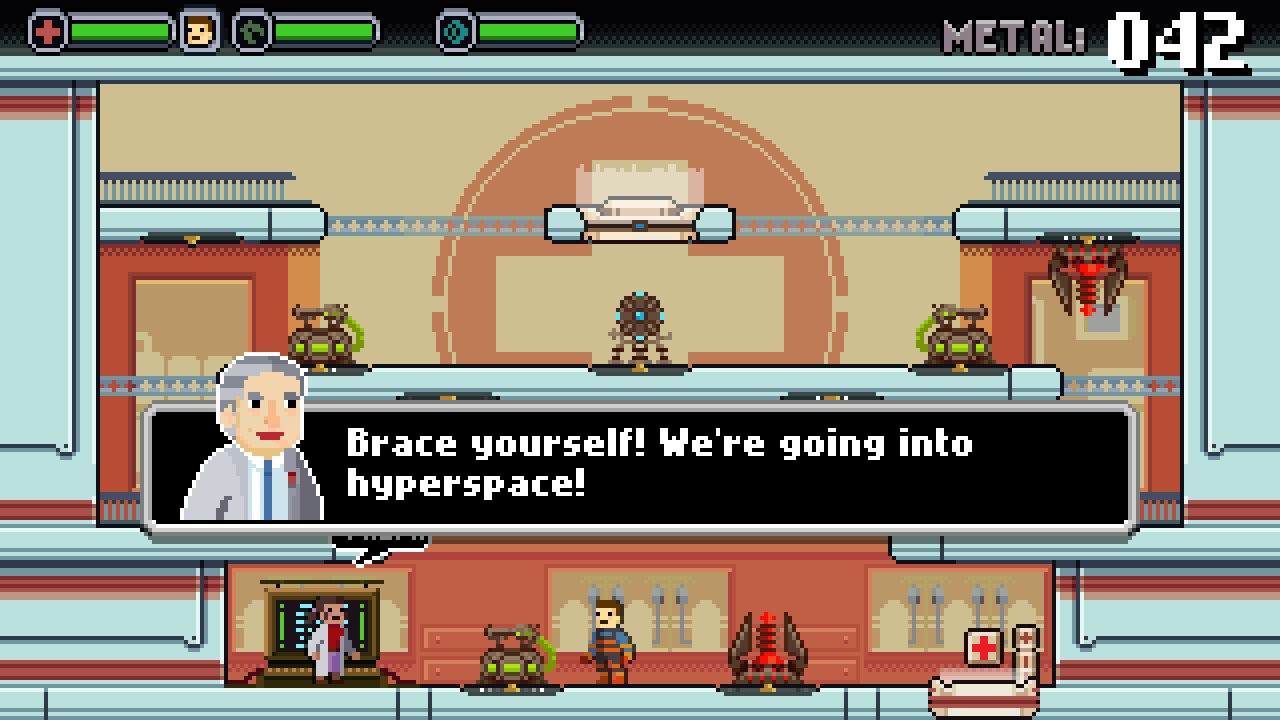 The controls are a bit more complex than your standard indie title, but yet still pretty easy to pick up and master. You can move vertically by flipping from surface to surface at the press of a button. With shooting, placing, and removing defences all being completed while defeating hordes of aliens, or trying to beat the clock to move to another area, you’ll find that things can get a bit hectic. I discovered that I was removing items that I had no intention of moving, this was where good planning alleviated the problem, also a fair bit of practice helped. If you are calm and collected, you’ll probably find that you have no issues, but if you happen to panic a bit like me, well, you’re going to have to learn to relax, and plan ahead.

Spacejacked isn’t your standard Ratalaika Games published indie title. I’ve experienced a number of their products, and they are usually; Unusual, and fun-filled experiences that are easy to obtain all the achievements, and complete in a short number of hours. Spacejacked is certainly a lot of these things, but quick and easy on the achievements it is not. To gather them all, you are going to have to master both story and endless mode. Both are challenging in their own unique way, and it’ll take a lot of patience, planning, and luck to be successful. I reckon you are looking at between 5 and 10 hours to finish this one. That is of course if you don’t get frustrated and quit halfway through.

A fun and unique title that places as much emphasis on shooting, as it does planning. You’ll get sucked into the ease of the game mechanics, just to get spat out by its difficult and frustrating aliens. Once you have managed to finish the story, you’ll find that you spend hours of your time defeating wave after wave of alien foes. Spacejacked is a nice twist on the tower defence genre, and the theme and gameplay style really adds a new take on a tried and tested platform. I had a lot of fun working through each stage and returned a number of times to play the additional modes that are available. I’d certainly recommend this game, though unfortunately, you may find that it defeats you, long before you get close to defeating it. So be just like Dave, and focus all your energy on saving the day, and destroying those alien life forms.

Dave is just your regular hero, a technician by day, and an alien hunter by night. Be just like Dave and destroy every alien that crosses your path!