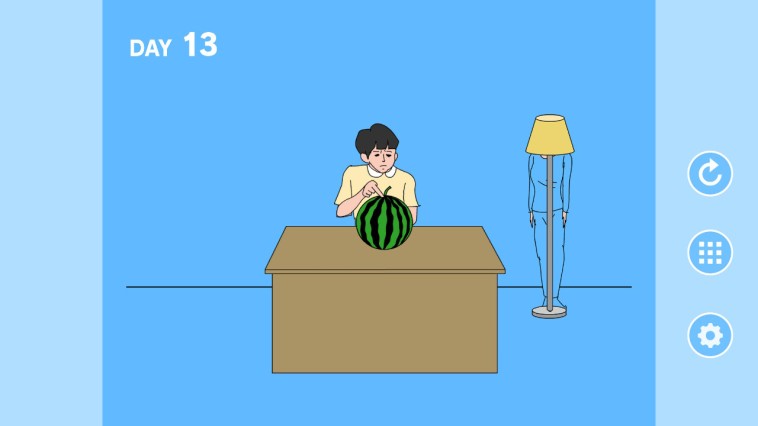 How on Earth does Japan keep making the kinds of puzzle games that just really appeal to the inner nature of people? Sure, maybe the long standing series of games about a salaryman trying to kill himself in as inventive ways as possible isn’t technically healthy, but, sadly, it’s crazy relatable. But such titles don’t universally translate back here to the United States, and work even less in Europe where most workers have substantially better working conditions. But we’ve all come across the arduous task of trying to play a game while mom or dad attempts to stop us so we “do our homework” or “develop social skills.” So KEMCO decided to stop focusing on normal mobile ports and RPG maker games to bring us the most relatable title in years, Mom Hid My Game!

First and foremost, pump your brakes if you’re hoping for something to tide you over until The World Ends With You gets released: you’ll be done with this game before the afternoon is over, though I have to say, right up front, that there’s a ton of replay value here. Mom Hid My Game! Is a sort of puzzle adventure that puts you through 30 days of your mother, fed up with your constant 3DS playing, attempting to hide your system for good so that you stop the neverending gaming. You, a plucky Japanese boy, are not one to give up so easily and do your best to retrieve your system at every turn. And the turns start off fairly simple (hidden on a book shelf) and very, very quickly go off the rails (inside a crocodile’s mouth). Please keep in mind that everything about this game needs serious suspension of disbelief: if you spend a moment going “how on Earth is that even possible?” you’ll be taken out of the moment, and you really want to stay in this world. 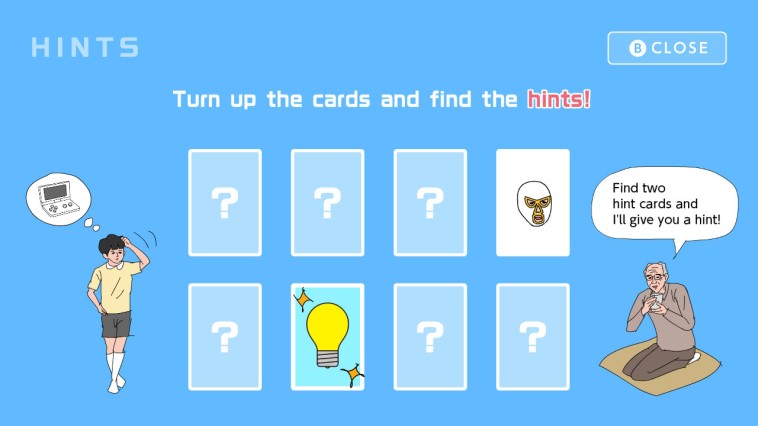 The interface is fairly straightforward, and I recommend playing in handheld mode to maximize response and intuition. Basically, you tap on various things to interact with them, and you occasionally pick up items that you’ll use to rescue your game system. Docked means having to use a floating, phantom hand to click on certain things, but it’s at least speedy enough to move around the screen without too much delay. You’ll have to open things, move things and go into separate rooms in your quest to save your precious game system, as well as find whatever may be needed to accomplish this task. Some of the things are fairly straightforward: get the game down off a high shelf, and, oh look, there’s a stepstool. Drag and drop, grab the 3DS, live to play another day. If this was all it was, you’d grow tired and bored instantly and demand your five dollars back.

Thankfully, Mom Hid My Game! is so much more clever than this simple idea, and you very quickly see the sly quirks and notions hidden in the game. For example, the pitcher of water can’t be used on the potted plant, because that’s where mom is hiding. Instead, refill grandpa’s glass till he has to run to the toilet and then find your game system underneath him. Genius! Or, when you see dad relaxing in the living room, don’t make the mistake of picking up his wallet, or mom, dressed as a police officer, arrests you and it’s game over. The whole game, starting from level 2 and beyond, have these wacky and frankly hilarious moments that you can trigger both to succeed and to fail. Since there isn’t a time limit or star ranking, there’s nothing to hold players back from enjoying each and every scenario offered and seeing how much went into making a simple concept extraordinary.

Additionally, this is one of those titles that makes full use of what you can and cannot do with a Switch. Rather than just keep things focused on item association and basic “if…then” logic, you need to often use the mechanics of the Switch itself, be it the motion controls, the rumble or even the microphone, to completely solve a puzzle, and it’s brilliant. These kind of decisions are what made WarioWare so popular: it could have been standard puzzles, but, instead, it’s a level of wacky that’s unapologetic and delivers in a big way. The very nature of the game drives it forward, and the vehicle of “fun and silly ideas” keep it accelerating to the very end. 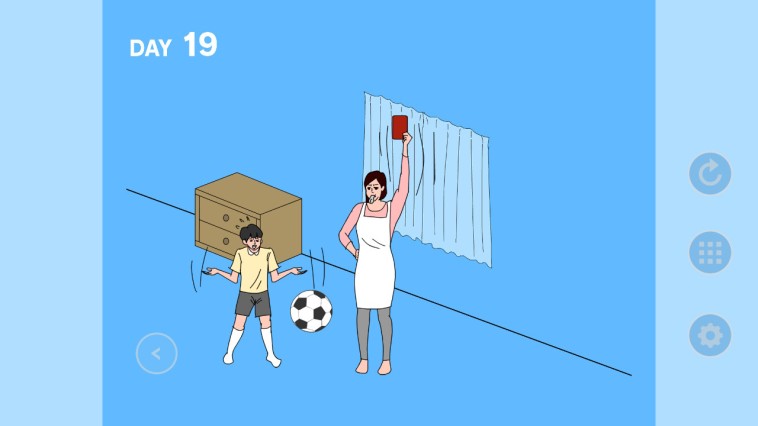 The graphics and sound of Mom Hid My Game! Are fairly simplistic, but still done with polish and style. The boy protagonist screams along in Japanese when things either go his way or he gets caught, and there’s no option to switch this whatsoever. There’s a chipper, upbeat soundtrack of constantly repeating simple notes that keeps things light and forward moving, but I doubt anyone is going to be able to hum along with the tune after they’re finished playing. I really like the way the characters are drawn and done, as it’s some excellent realism that you don’t often see coming out of Japanese cartoon drawings.

I can’t talk too much more about the game itself without ruining a lot of the surprises, and Mom Hid My Game! is full of them. This is well worth the price of admission, and it’s a silly game that anyone should be able to enjoy as long as they have a bit of humor in their hearts and a perchance to laugh at the absurd. If you have ever had to play under the covers after bedtime with the volume way down, you’ll identify with this title and love every insane moment.