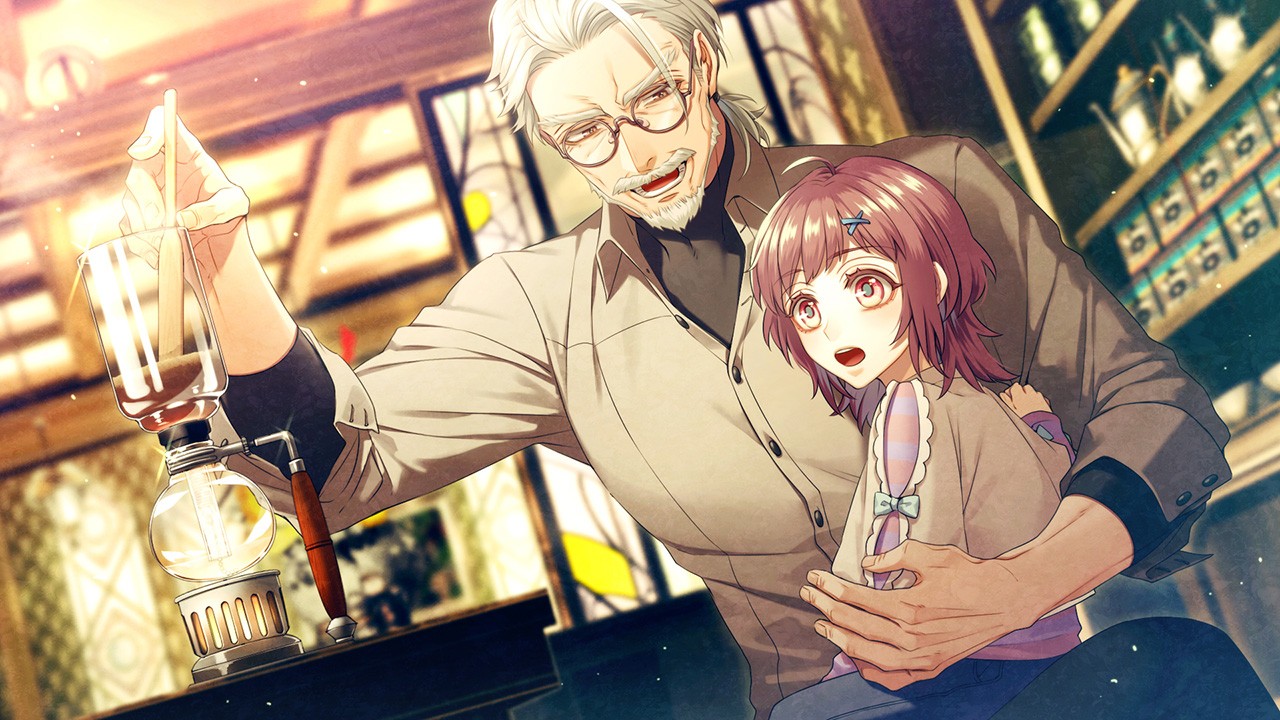 Visual novels, particularly otome games, are all about wish fulfilment. In many cases, we are seeking to replace the absence of actual romance, or at least a certain part of romance, within the bounds of the game. Please don’t think I’m condemning happily dating or married people who play these titles: imagination and exploring the possibilities that are within the role of the hero/heroine of these games is far from lascivious. My wife has put untold hours into the Girl’s Side franchise and neither of us think she’s about to run away with a high school boy. No, instead you get to pretend and have fun in a different way, and perhaps see what it’s like with the affection and attention of someone, or something, totally different.

In Cafe Enchante, players get to adopt the role of Kotone, a lovely woman whose grandfather has passed away and left her the only important thing left in his possession: his cafe. Wanting to honour his wishes and also to connect with his now departed spirit, Kotone journeys to the cafe to visit it one last time, and discovers a suspicious door that appears out of place. Foolishly, Kotone turns the sign over to read “open,” and suddenly the door bursts forward with visitors. Strange, unusual visitors with all sorts of visible differences: horns, angelic wings, and apparently a nonexistent head. Fearful at first, she quickly learns that these are the regular visitors to her grandfather’s cafe: denizens of another world who loved to visit Cafe Enchante. They had a rather special connection to Kotone’s grandfather, and now it seems that the connection has passed to you. However, it quickly becomes apparent that their vibes with you are much more intimate than you may have realized, and it falls to Kotone to see where her life – and the lives of her patrons – will head as she follows her heart across five different love lines with tons of story baked in.

As I mentioned before, Idea Factory seems to have a knack for crafting this level of otome game that makes the heroine seem important and more a relatable character than not. Whereas there’s a running trend in other otome games to make the main persona as flat as possible for easy transference, Cafe Enchante makes sure you know that Kotone is a real person with real feelings and ideas. She’s wistfully saddened about her grandfather, shocked without being overwhelmed about the reveal, and aware but not fully cognizant of her own unfolding feelings. Though her character isn’t voiced (a practice I understand even if I don’t agree with it myself), she has much to say to everyone who she encounters and makes sure her own opinions and stances are both acknowledged and respected. She isn’t quite as bold as our last heroine Cardia, but Kotone stands on her own two feet, and she’s no lilting flower when it comes to falling in love with these dudes, all of whom have both good and bad endings ahead. 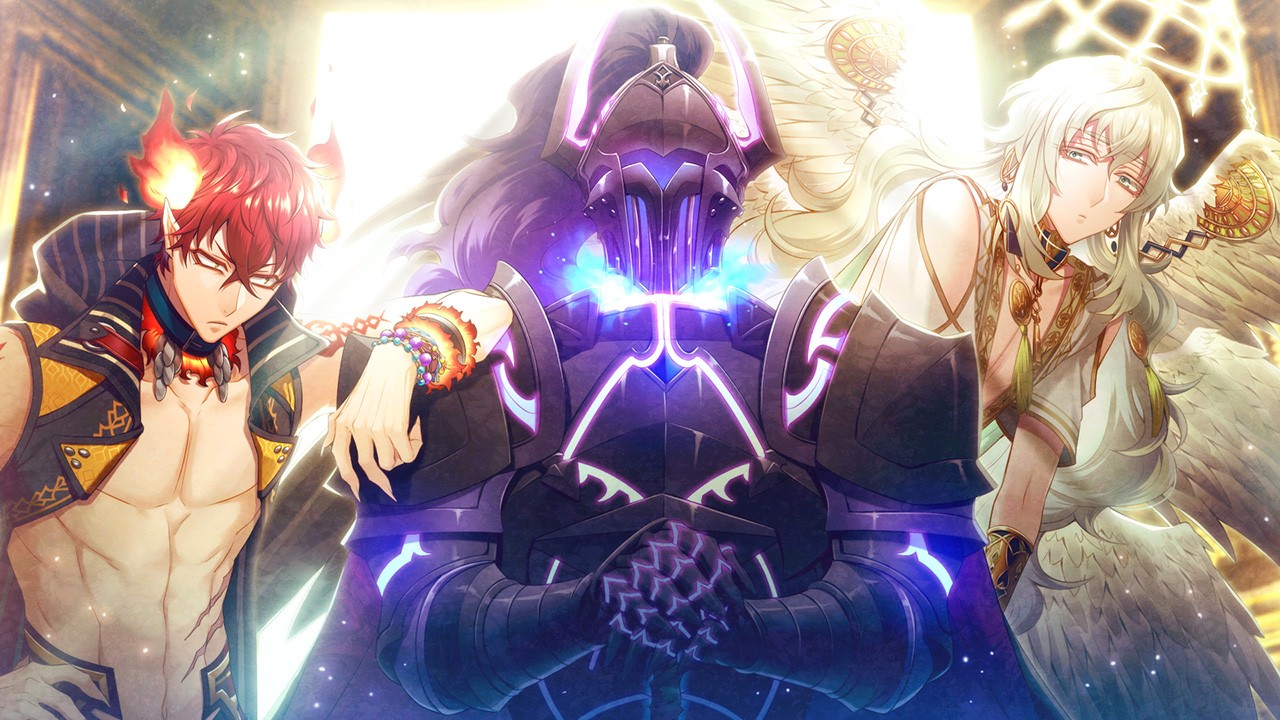 It should be noted that Cafe Enchante has a lot of mixing of Japanese tropes regarding romantic encounters and standard boy types with lore about mystical life, both Asian and European. There’s talk of fairies, of humans turned to animals, of demons and pseudo-werewolves and the like. There’s no real ground or basis for reality (and certainly nothing for historical characters), so be fully aware of what you’re getting into before everything goes to the mat. You’ve got the super kindly, chivalrous character, the tsundere bad boy who needs love but won’t admit it, a ridiculous fanboy who is actually wracked with sadness and guilt about his role in the universe, the reluctant prince who must rule though he doesn’t want to, and one human dude to try and normalize everything even though he’s much older than your character is. As long as you’re kind of down with whatever regarding the wild plot twists within this game (and knowing that you have to clear all the other routes before having a shot at Miser, the demon lord), then you’ve got a full buffet of boys to choose from.

All sexualization aside, Cafe Enchante was a freaking wild ride, story-wise. There was so much intermingling of classic fantasy with some real Biblical myths, the ideas of humans and monsters co-existing in a way that brought back memories of Final Fantasy VI, and acts of benevolence, of anger, of sacrifice and, most importantly, of love. This is a wild ride that I’m doing my best not to spoil because there’s so much that comes from these characters that you wouldn’t expect from the setup. This isn’t “work at a cafe and fall in love,” this is “discover all about the Neverwhere under your feet, the horrors that come from necessary evil and that affect the lives of all” sort of game. There are both good and bad endings within the game (naturally), but those endings feel like they have a greater impact than just your romantic leanings, not least of all because the bad endings tend to result in one or more deaths. Also, completionists can breathe a sigh of relief: there’s really only one “good” and “bad” ending to find for each pathway, and there are as few as two choices per chapter, so you don’t really need to worry about excessive trial and error.

The writing for Cafe Enchante is well handled, with the translation and localization teams bringing over English that conveys the spoken Japanese mostly well. There were some times where the phrasing was a bit stiff, but I think that could have been stylistic as opposed to a misunderstanding. Additionally, unless you’re also fairly bilingual, you won’t notice the differences in phrasing between the original Japanese and the English, though it does, arguably, happen a couple of times. However, there’s never a time where this was a result of hack-n-slash editing or someone deciding to make a character say something they didn’t simply for plot/time. It’s just a matter of translation preferences, and I’ve seen way, way worse in my time in gaming. 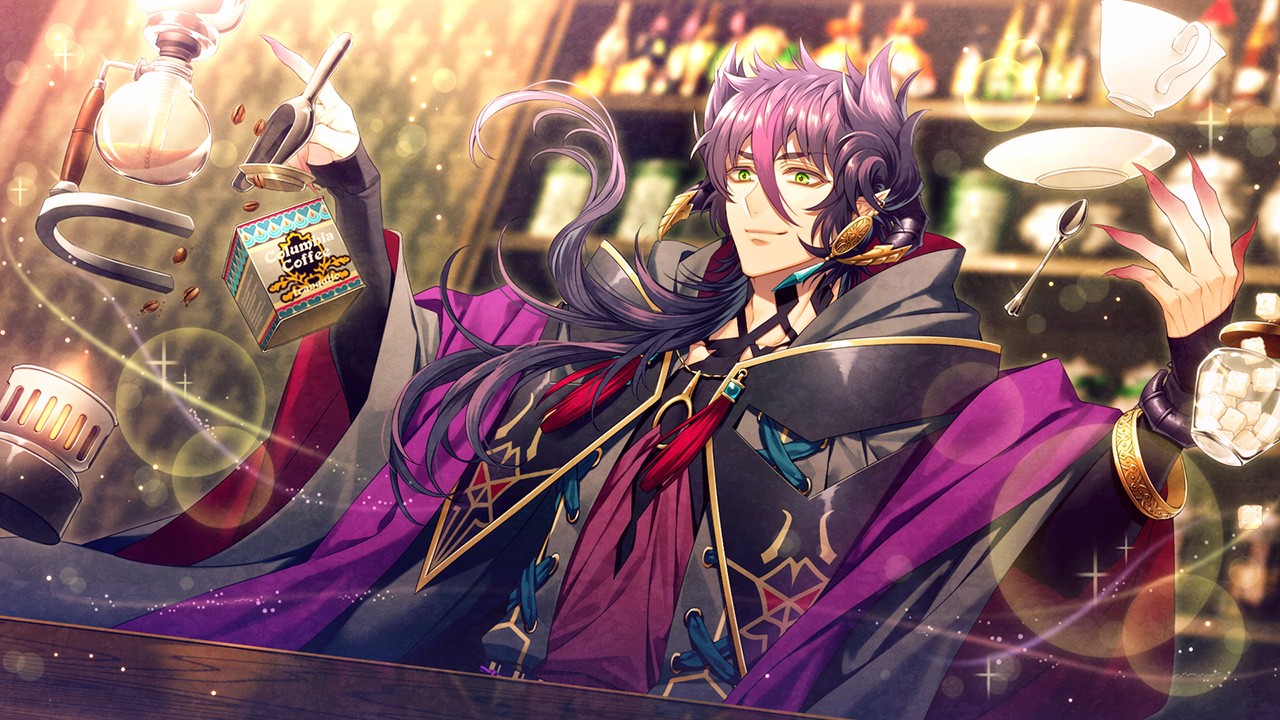 The audio is one of the biggest winners of Cafe Enchante. Besides having everyone with simply fabulous voice acting, the score of the game is one of the more ranged and dynamic ones that I’ve seen within a visual novel. Starting off in the cafe itself, Cafe Enchante makes no misconceptions about the amount of jazz, bossa nova, and gentle classical you might hear during the downtime moments, before ramping up into a more sweeping and dramatic pieces to help match the sudden reveals and bombshells that get dropped along the way. Mostly, though, it does stay on the softer, ambient side, which made this game a pleasure to listen to all the way through. It also helped to really sell the atmosphere of the conversations: discussing serious and light subjects while some of the groovier notes played along in the background really dragged me into the mentality of the story.

Due to my predilection to not spoil visual novel stories, I’m afraid there’s not much more I can say about Cafe Enchante. If you decide there’s one or more of the men that you have to simply spend more time with, there’s an extra menu for additional chapters that go beyond the main story. Oh, and the menu? This game has one of the most delightful in game menus I’ve ever seen, literally presenting as a cafe menu and having that positively whimsical feel to it that helps to set you at ease with the characters and their primary ideas while setting you up for some amazing storytelling. If you’re looking for a toasty game to keep you warm going into this long winter, why not curl up with a tea, a biscuit, and some of the fascinating patrons of Cafe Enchante?

A fascinating story of mythical and mystical worlds, of fantasy and fortune, shock and betrayal, and, most of all, love found with croissants.