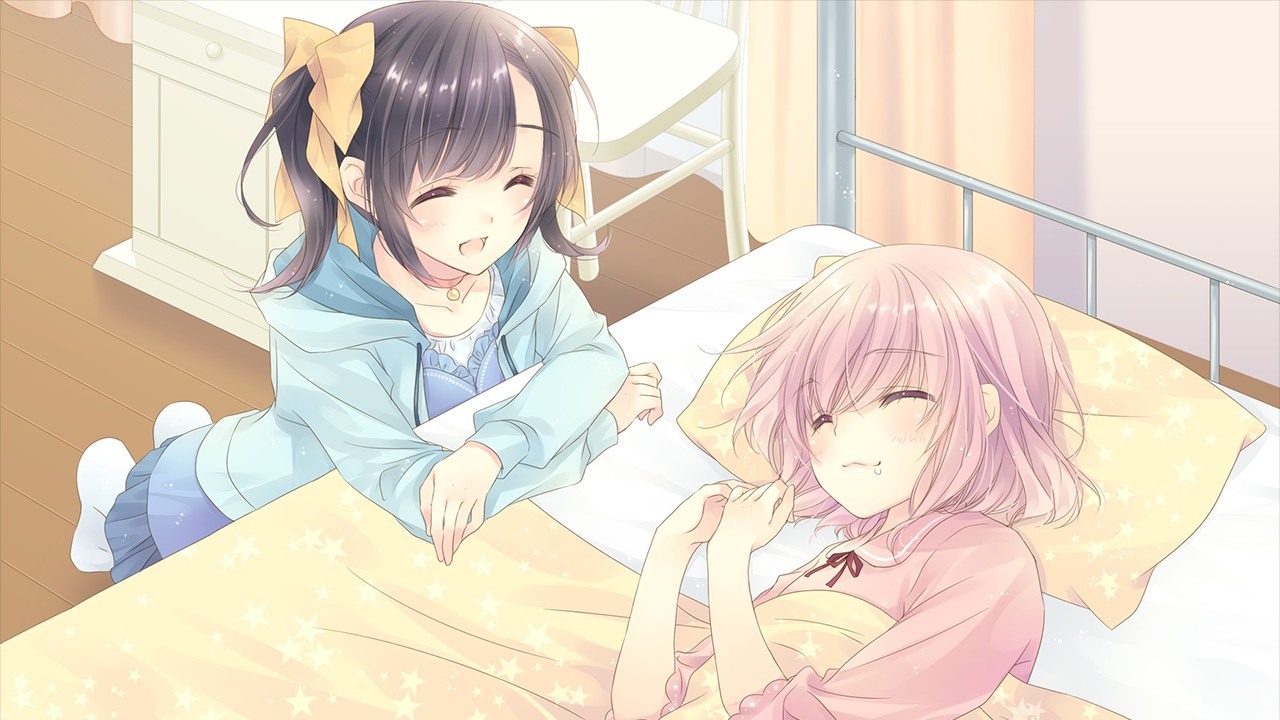 To address something as a syndrome, you acknowledge that there are several elements that are working together to create one, unified effect that can be classified. So when you have something as Nurse Love Syndrome, you understand that it comes about due to multiple factors working together to bring about the love of nurses. In the first game from the Kogado Studio and DEGICA, we saw the evolution of the interest and the love in this very sincere, medically accurate and occasionally shocking visual novel that celebrates the love of two women. It thrust us into a world where certain obstacles had already been overcome, and our protagonist, Kaori, was ready to become a nurse with an arsenal of knowledge under her belt (about medicine, but not about life and love). But now we use a different word to modify our game world: addiction. An obsession or fixation, sometimes chemical or psychological in nature, that is universally deemed as unhealthy. This terminology is the perfect bait-and-switch for players who were coming into this gaming world. Nurse Love Addiction proudly advertises that it’s about lesbian love, and the box art does show cute characters kissing, holding and generally being romantic with one another. A game world that’ll be full of cute happenstance and “accidental” sexuality that’s sure to delight the player.

What a wonderful, beautiful lie.

Nurse Love Addiction takes us a few steps back from where Syndrome started and places us in the shoes of Asuka, a recent high school graduate who, until recently, was aimless in life. She didn’t know what she wanted to do at all, but made the sudden decision to embrace her childhood dream: to become a nurse. She enrolled at the Teito Nursing School, and resolves to use these next three years to extend her reach to the stars and become a white robed angel to help the sick, the despairing and the dying. Asuka, unfortunately, hasn’t totally accepted the responsibilities of her lifestyle, though, so she is joined by her younger sister, Nao, in living on her own and getting her life on track. In no time whatsoever, Asuka meets other, more auspicious characters: Itsuki and Sayuka, two fellow first years who seem to have more than meets the eye at their disposal. In this world (as in the previous world of Syndrome), there are rumors of the “healing hands,” where you can simply make someone well by laying hands upon them. Even Nao has exhibited some of these talents in younger days. But Itsuki has an eye out for Asuka and promises her “it’s not what it seems.” On these cryptic words, we dive into the next three bombastic years for Asuka and her classmates. 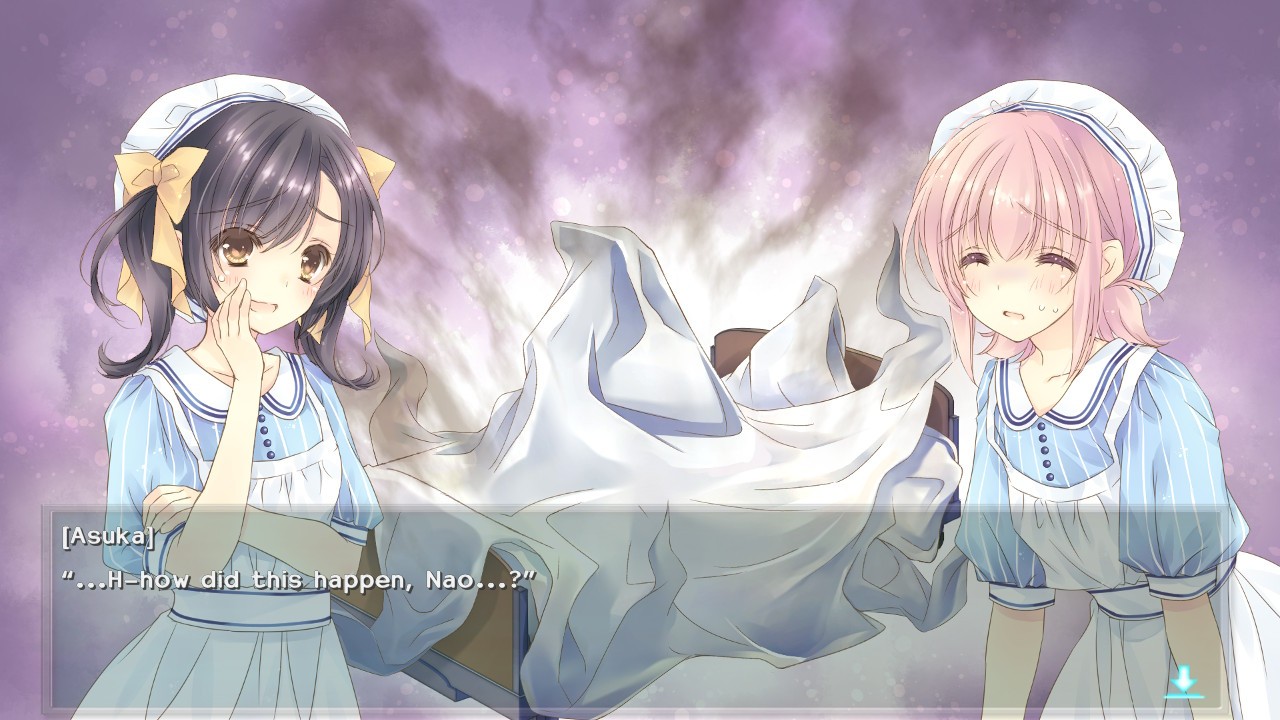 Nurse Love Addiction starts off strong on a fundamentally systemic positive note in that the game is so much easier to understand by changing the menu back to a simple “save” and “load” ideology. I’m sure plenty of people liked how it was set in Syndrome, but that’s a weird hill to decide to die on in terms of being different, and save and load are the universal language for what to do with a game. Everything’s a bit more streamlined, and the menus are generally a bit more responsive. Also, you need to play for a bit before you get the opening song, which I like better than how Syndrome was handled. Since this one starts further back in the nurse chronology, it makes more sense to give Asuka and Nao a bit of back story, introduce a handful of important players, and then chime in with the cute song, whereas Kaori was just “NURSE TODAY!” And cue music.

On the other hand, this shift in timeline also means a shift in tone, and that wasn’t something I enjoyed as much initially in Nurse Love Addiction. Whereas Syndrome dives into the meat and potatoes of the hospital life and medicinal terminology almost immediately, we have a lot of exposition about personalities, hopes and dreams first, as well as introducing more apparent character tropes without a ton of reasoning why. With Syndrome, everyone was doffed in nurses outfits right away, levelling the playing field and making the development between them organic and gradual. When you meet Asuka and Nao, they’re in pyjamas, and Nao has the traditional “little sister” ponytails. Sayuka is literally done up in some high class, high fashion coat with gorgeous, flowing hair, and Itsuki has some thigh high boot/garter deal going on and is pushing up the cleavage. It’s clear that Kogado Studio took notes from their previous game’s audience and worked with it, which is sort of a middling success. On the one hand, the characters are even softer in facial articulation, which works wonderfully with the watercolor styling of the game. On the other, it pushes a lot of stereotypes about visual novel love interests and leaves you back with the princess, the haughty intellectual, the older woman, the younger woman, and that sort of noise that you’d expect. Thankfully, the characters themselves are quite well versed and give you plenty to work with. 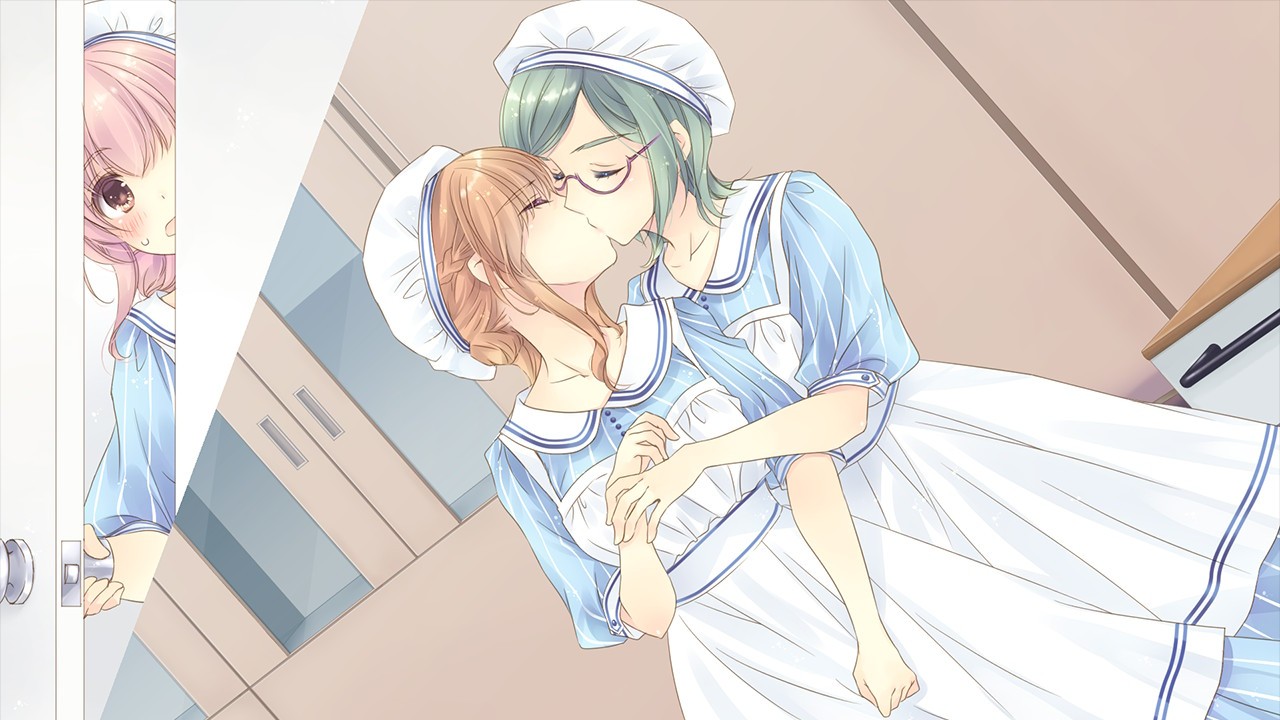 What Nurse Love Addiction does exceptionally well is build the relationships and build the world where Asuka and the others exist and find each other. With Syndrome, there were hints of attraction and desire almost from the first meeting, but things have to grow from seemingly nothing here, which is sometimes how it happens. Asuka isn’t even sure about her own feelings and affections in the beginning, but, through the correct choices, she is able to focus on her studies as well as focus on who might be the best match for her in the years to come. She is thinking about her future in a big way and what it means to be with someone into the years beyond her nursing school. Now, how Asuka handles these feelings and thoughts are probably different than how most human beings would, and I suppose this is the point where I reveal that this game goes completely crazy after a few hours.

Have you played Syndrome yet? Maybe not, don’t worry, you don’t have to. In Syndrome, things have a nice set of highs and lows in the endings, and they sort of keep in a nice wave pool of ideals. There’s love, there’s heartache, there’s loss, there’s madness, and there’s one instance of essentially enslavement that you just sort of have to deal with if you end up there. With Addiction, there are some amazing, HARD turns after just a few hours into the game, ones that focus more on medical ideology that would certainly not be allowed in a hospital, and then things just get even weirder. The extremes for the ending routes of Addiction are far higher and lower than Syndrome, and they make me smile and broke my brain. There are wedding dresses. There are children, but not in ways that you’d think. There are tragic deaths and guns being pulled, there is the harsh reality of what could happen if you suck at school. I don’t want to spoil too much, but I’m pretty sure there’s cannibalism? Like, it’s done in a way that I’m still not certain and I’m afraid to ask at this point. Also, in case you didn’t pick up on it, Nao, your biological little sister, becomes a love interest, and that really never sat well with me. Japan is a country where incest is held in a different regard, but it still is low on my list of “things I want to do in a dating game,” so be aware of that as you move forward.

Yet Nurse Love Addiction is still a massive success in terms of storytelling, replay incentives and fantastic voice work all around. I can’t deny that I was a bit put off by the way the game started me off (and I was incredibly weirded out by Nao’s bad ending), but everything started picking up steam quickly, and it caught me and enthralled me all the way to the bittersweet endings. This has been a fantastic duology, and I’m sure fans will have equal input as to which of the two games they enjoyed better (and, as they both stand on their own entirely, the opinions are equally valid). I went through Addiction at a more frenzied pace than Syndrome, and I believe that to be because the story was a stronger, heavier hook than I had anticipated. The graphics are arguably better, the music is beautiful and moving, and the strong, positive connections are some straight up relationship goals (and the negative connections are reasons to call the police). If you’ve been wondering and want to add a heaping spoonful of intrigue and insanity with your yuri, get this game immediately.

The fascination and attraction of the nurses who heal with medicine & spiritual energy continues, and players now can take bold, unsettling moves forward.