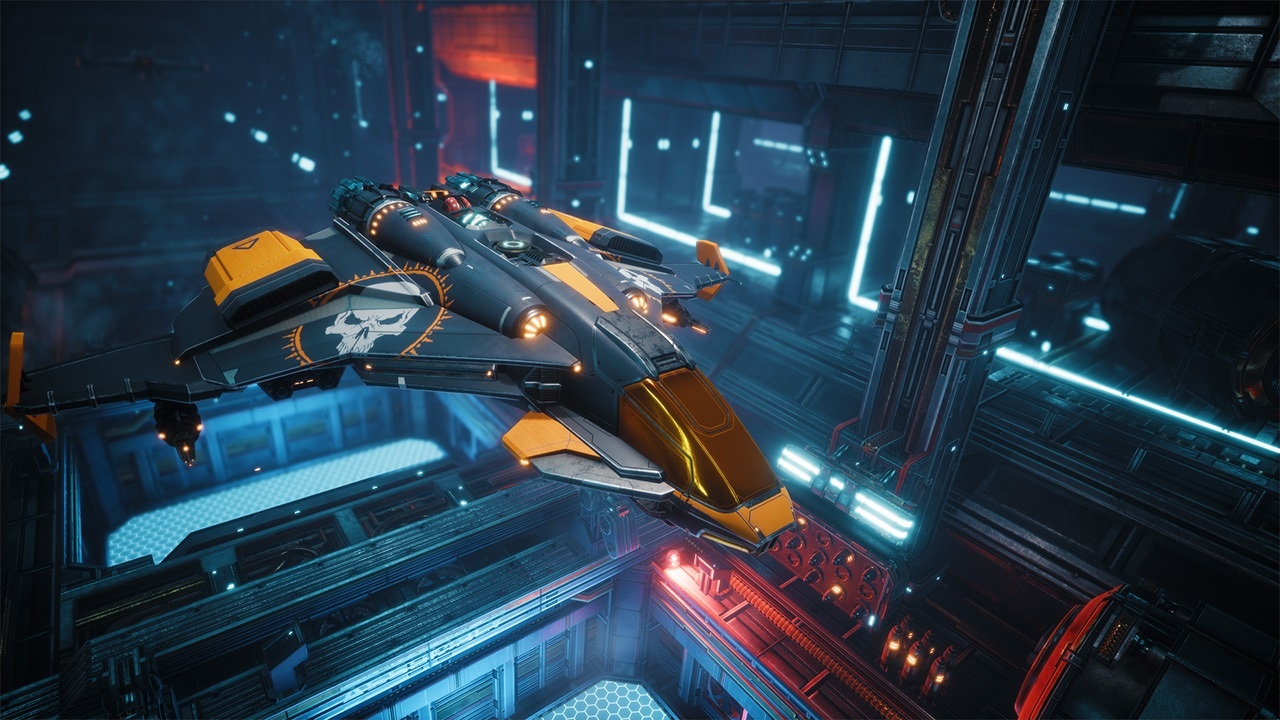 These days, it seems that the majority of roguelites seem to focus on platform games, dungeon crawlers or top-down shooters. However, Rockfish games have brought an interesting proposition to the genre, with their release of Everspace: Stellar Edition, a space exploration and combat game that’s set in an ever-changing universe as it launches a release upon the Nintendo Switch.

You play as a lone pilot within the vast expanses of space; the memories of your past life lost in a blur as you set about on an exploration of the universe around you and a journey of self-discovery. A series of jump-gates warp you to different sectors, each one hosting a variety of areas to explore and alien races that can either help you or hinder your cause. Because of its roguelite elements, each of these sectors are randomly generated with each play-through, creating a series of fresh environments that are either abandoned, friendly or hostile. Exploration of the environments is key here as you mine asteroids or fly through them along a network of caverns, take down pirates and mercenary ships or destroy facilities in order to gain valuable resources.

This soon becomes a vital element of the gameplay, as not only does each jump to each sector use up precious fuel reserves, but also serves as a way to acquire new weapons, shield boosts or damage multipliers, as well as provide monetary values in the upgrading of your space craft. However, there are also other elements in play with interactive characters and quest lines to produce a narrative that pushes a story of sorts along. It all adds to produce a series of environments that are equally dangerous and exciting to explore. Gathering resources, creating alliances or battling enemies are all sublimely executed here, producing an exhilarating experience in whatever task you may be undertaking. 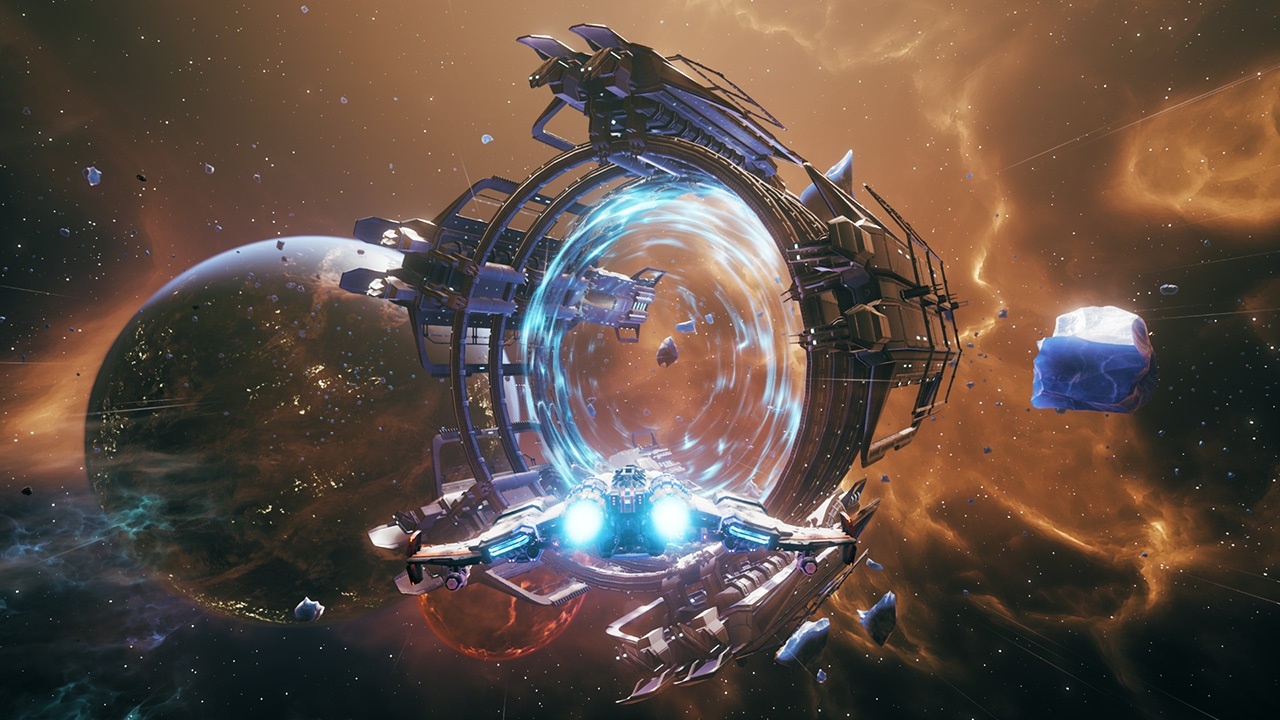 Part of the allure in this game, is the not knowing what each sector will hold. Your actions can change the face of the environment, creating enemies or alliances in the actions you undertake. It all adds to produce an enticing game as you never know what may happen next or what surprises you might find as you warp into each new zone. With each resource you find, you gain credits with which you can upgrade your craft. However, although some craft do contain trading posts, the majority of upgrading comes when your craft is destroyed. With the unknowing of what each sector holds, death can come thick and fast, although this can also be a saving grace at the same time.

Every time you fail in your quest, you get the chance to spend all of your accrued resources on upgrading various elements of your ship. The beauty of this game lies in its rewarding progression system, as all of your upgrades remain with you each time you play through the game. The more you play, the more powerful your craft and the further you can progress in the game. However, it’s important to spend as many of your credits as possible as once you leave the upgrade screen, the rest of your credits are lost until you accrue more in  your next journey. Each of the sectors that you fly through also contain a number of branching paths, keeping the gameplay fresh and each playthrough interesting.

Each of the environments are superbly created here, with some breathtaking scenery and highly detailed space models. Viewed from either a first-person, cockpit view or externally, space has never looked as good as it does here and for an indie title, this is a massive achievement within the genre of its style. Combat too, is varied and engaging, with each of the viewpoints offering distinct variations in how they feel and immerse the player into its worlds. If there’s one fault with the game, then the control scheme can be fiddly at times and takes some getting used too, with strafing and hovering being controlled with the left thumb-stick, whilst pitch and yaw are maintained with the right. The shoulder buttons adjust speed and weapon utilisations. However, everything is smoothly executed with fast-paced and thrilling combat mixed with smooth movement, but sometimes fiddly, control. 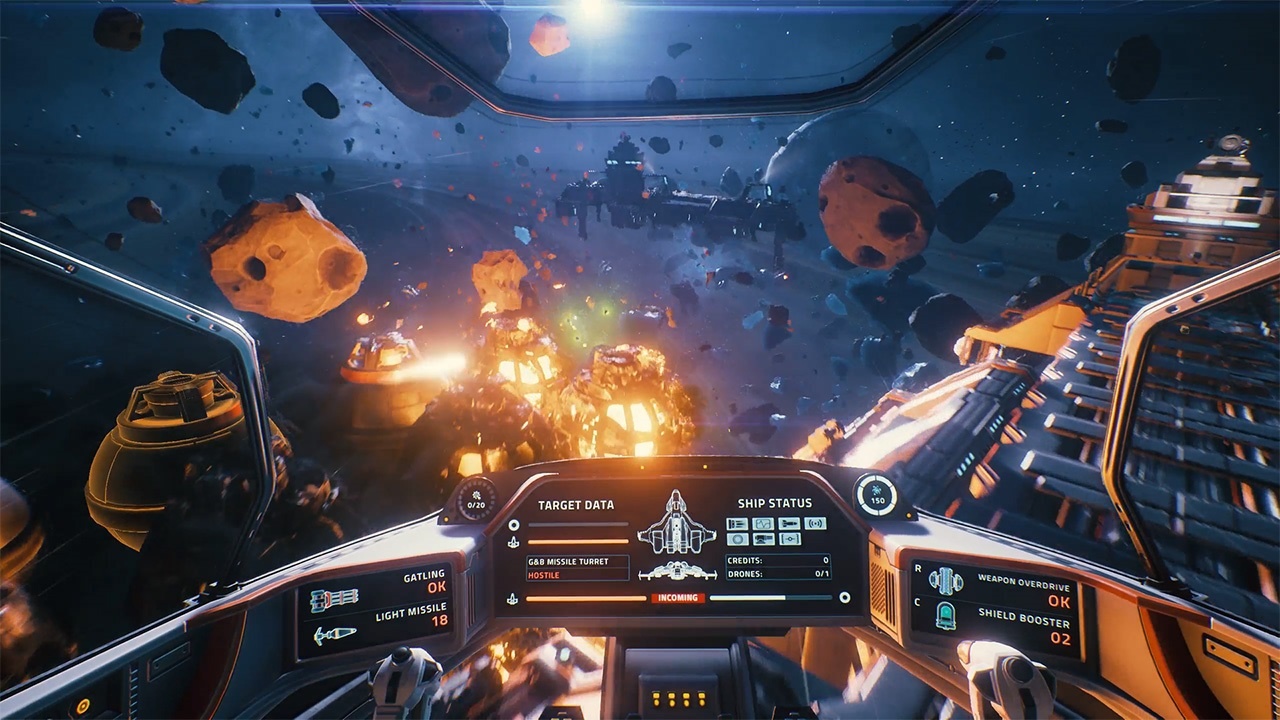 The constant exploration, gathering of resources and upgrading of systems offers a good deal of depth to the gameplay. There’s always plenty to do within each of the sectors and always full of surprises. Its roguelite elements are superbly implemented here, with progression to your craft remaining throughout, allowing you to progress further with each playthrough as your ship grows stronger and you learn more about the universe around you. In fact, when compared to other, similar games within its genre, Everspace: Stellar Edition has to be one of the most interesting and engaging space combat and exploration games of recent years and is in fact light-years ahead of many of the triple-A games that follow along a similar premise.

Although previous versions have seen releases on other systems, these were often hampered with frame-rate issues and game-crashing bugs. However, on the Switch these were factors that I never experienced within the time I have spent with the game. This ‘Stellar Edition’ also comes bundled with the ‘Encounters’ expansion; making it the most definitive version of the game to date with new stories, characters, ships and equipment. The sound is also worthy of a mention here, with a sixty-track playlist that suits the style of the game perfectly and a plethora of sci-fi sounds that feel solid and exciting in their execution.

Overall, Everspace:Stellar Edition is a sublime example of space exploration and combat. Its roguelite elements are superbly implemented, with randomly generated zones to explore, a progression system that remains and a rewarding upgrade system that makes you feel more powerful with each playthrough. There’s plenty of variety here, as well as each of the zones being genuinely interesting to explore and combat that is equally thrilling. It all adds to produce a game that feels unique and distinct, offering enough variation and excitement to keep it fresh over the long-term; you can even save your game at any time, allowing to play as and when you choose without being punished by its roguelite elements. In short, this is a blast of a game and light-years ahead of many of its competitors within its genre.

A roguelite, sci-fi, exploration and combat game that’s light years ahead of the competition.