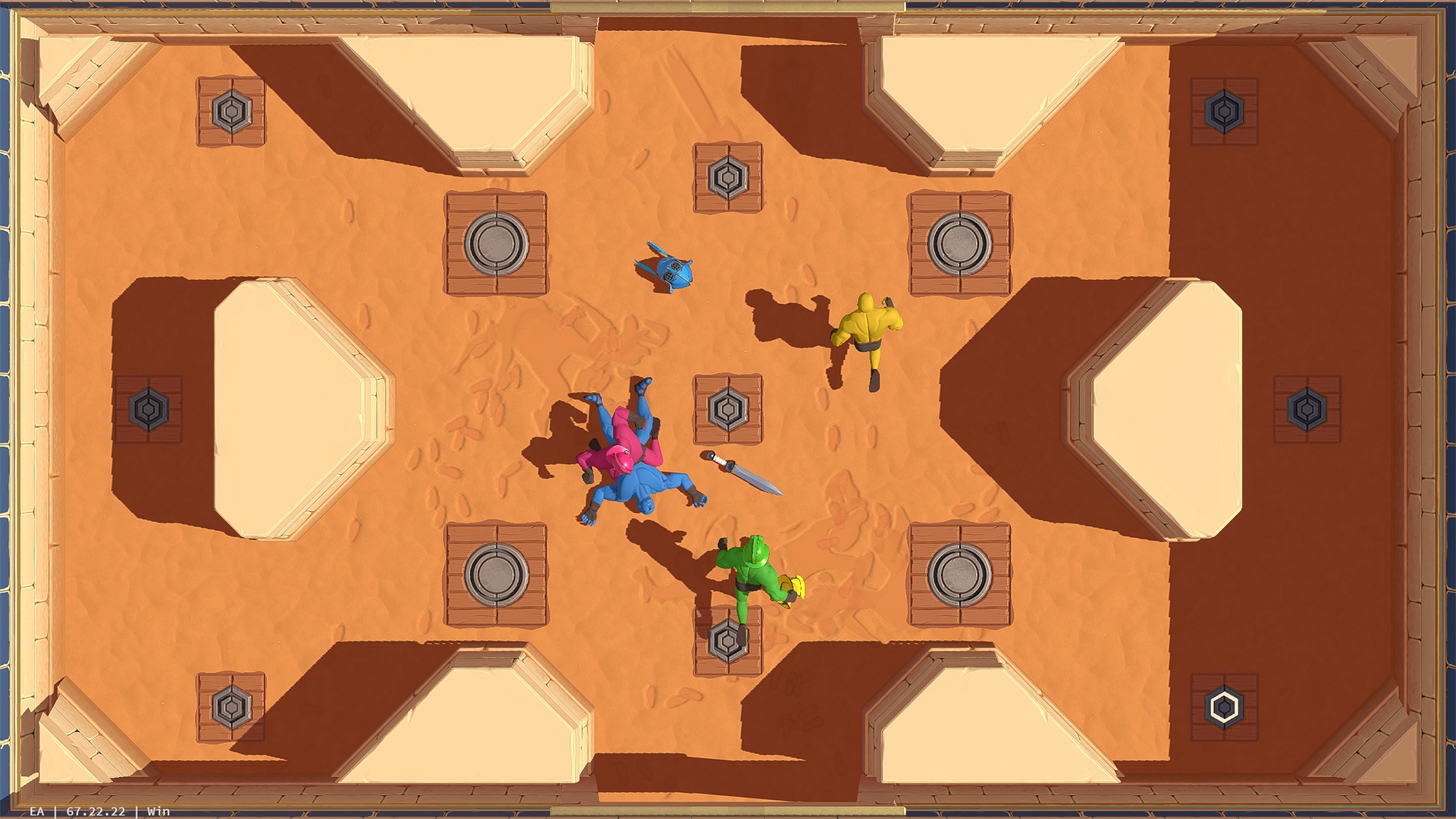 It’s always hard to describe a game in a short sentence. The best I could come up with for Arena Gods is; it’s basically Gang Beasts but for more mature people but even then, I feel like I’m underselling just how fun and action-packed this game really is. Whenever I play a game in early access, the core gameplay must be fun and enjoyable but also have visible potential to become greater with each update. Although Arena Gods lacks content and has a few bugs, at its heart lies some edge-of-your seat gameplay that only grows the addiction to keep playing this game.

Arena Gods is set in a time where armed combatants in the shape of gladiators were forced to fight for entertainment. It’s a top-down local multiplayer game that can be played by 2-4 players, either with friends or bots. There’s no backstory or campaign, emphasising that this is a true multiplayer title. The only way to play is through a standard fight-to-the-death mode aka, last man standing. Bots can be added, and they can put up a good fight, but they can be prone to glitching and running into the wall rather than at you. However, if you want to truly capture the enjoyment out of Arena Gods, then playing with friends is a must. The graphics are passable, featuring vibrant, colourful arenas and well-designed weapons. Unfortunately, the characters are rather bland and are the same model, with them only being separated in the bright colours of yellow, blue, green, and pink. 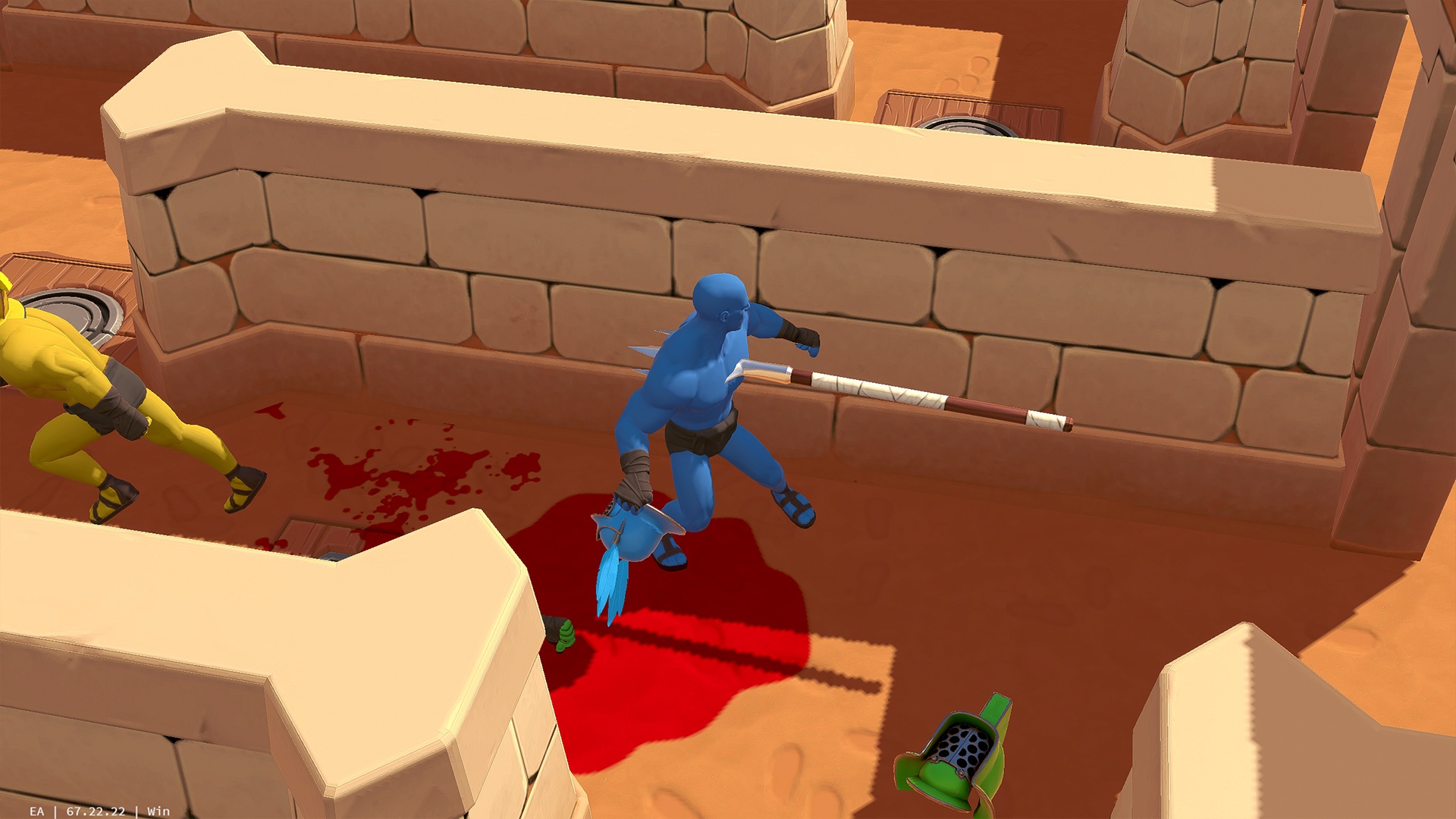 At a glance, the game looks like a Gang Beasts gladiator inspired title, but unlike the chaotic chaos that is Gang Beasts, Arena Gods offers some rewarding gameplay that sets a high marker for similar titles. When starting a match, players can only get into fist fights when battling another player. The controls, which are displayed before every round, are easy to grasp and master, allowing the player to punch with either hand, use evasive rolls, grab or catch objects, pounce onto a downed opponent to finish them off and put up a limited timed defence with the use of your arms. As the game progresses, chests appear across the arena containing either offensive or defensive weapons such as swords, spears and shields which can be used to fatally attack another player or stun them. Weapons can be thrown to either kill or takedown an enemy however players can execute a well-timed grab to catch any projectile being thrown at them. Every arena has various doorways that loop around to the other side of the map and weapons can be thrown through them. The setting for the arenas are either classic or Egypt, both containing multiple battlegrounds. Games are won by being the first to win three or five rounds depending on the option set.

For any local multiplayer title, the gameplay must be fun and engaging. Developer Supertype nails its combat mechanics in every department, offering some of the most hectic but satisfying combat system I’ve used in a while. Friends that wouldn’t describe themselves as gamers played this with me and, within a few rounds, had memorised every attack and defensive move, allowing each round in becoming highly competitive. The looped arenas make for some crazy fights, which resulted in unpredictable, unique deaths every time. Its very hard to dominate every round given the fast-paced action, and that’s what makes Arena Gods enjoyable to play amongst friends. Very rarely did anyone win two games in a row. Whilst a bit of skill is required to become a solid player, the element of luck needs to be on your side too. Players can also wield two weapons at the same time, allowing for some devastating duels when it comes down to the final two. You can stun a player, sit on him, and decapitate their head with a sword. I know it sounds barbaric, but the gruesome kills that players can execute really make for some laughable moments. Who doesn’t want to beat a friend to death with the decapitated arm of somebody else’s? 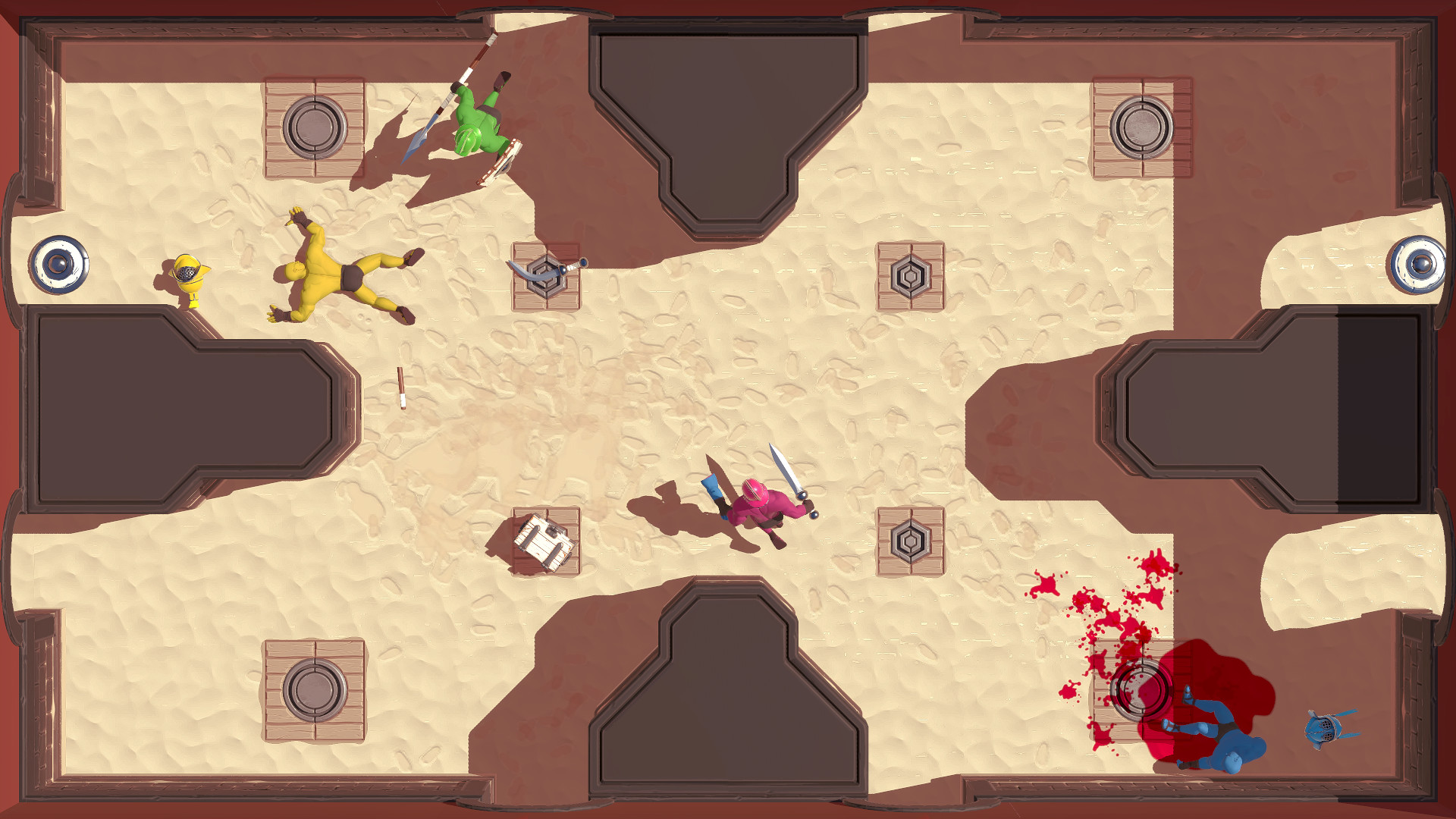 Like most early access games, Arena Gods does have a few bugs that damper its experience. Hitboxes aren’t completely up to scratch yet, so you may find yourself being stabbed in the back when the blade misses you by 15cm. There were times where walls were seemingly non-existent for weapons and so if thrown, flying spears and tridents continued to loop across the map until one unlucky soul takes the hit. Granted it was fun and could be a game mode, but it could get a little annoying after a while. That leads me to my next point in which the game really is lacking content to justify its current price. There isn’t a lot to tinker with in the settings nor is there any option to customise your fighter like games like this. Although I assume there will be plans to add such features in the future, I’m not a fan of games charging people for features that have become a norm to include in recent years. However, its worth noting that the developer remains passionate with users and well-entuned with their concerns and recommendations for future updates.

When I watched the trailer for Arena Gods, I expected it to be a hectic, fun and enjoyable multiplayer game, and Supertype delivers. With other friends, this game can easily provide hours of entertainment and unpredictable results and if this remains constant with future updates, Arena Gods can easily eclipse rivals like Gang Beasts as the go-to couch multiplayer fighting game. The gameplay is Arena Gods’ selling point and you’ll be surprised at how fluid and engaging it is. However, a lot needs to be added to make this feel like a complete title. New game modes, more arenas and being able to customise your fighter should be features that the game should introduce in the future. For now, Arena Gods is a solid multiplayer game that you’ll enjoy with a group of friends.