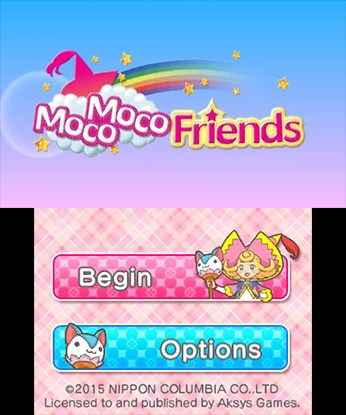 Moco Moco Friends takes place in a world inhabited by Plushkins. Plushkins are adorable little creatures, but they are also, the game’s opening warns us, very violent. The only people capable of safely befriending these Plushkins are Witches, who are beloved the world over for the good that they do with their powers. You play as Moco, a recent graduate of Plushkin Magic School who has dreams of being the greatest Plushkin Master of them all. So… sound familiar yet?

To call Moco Moco Friends a Pokémon rip-off would be unfair, although understandable. It certainly does borrow a lot of elements: cute monsters to befriend; battles to make these cute monsters engage in; monsters with different elements which are strong and weak against each other; etc. The enjoyment in Moco Moco Friends comes from trying to recruit the perfect monsters for a given situation. The idiosyncratic style of the monsters is a big draw, as all the designs are great, and that provides a big draw to keep playing. Unfortunately, the combat mechanic itself is a bit dull, lacking the depth that Pokémon has built up over its years of being a series. Battles are typically three on three, with three of your beloved Plushkins facing off against three enemies. Combat takes place in a series of dungeons, which unfortunately tend to be a bit repetitive, and fail to provide much of a challenge to the more experience RPG gamer. 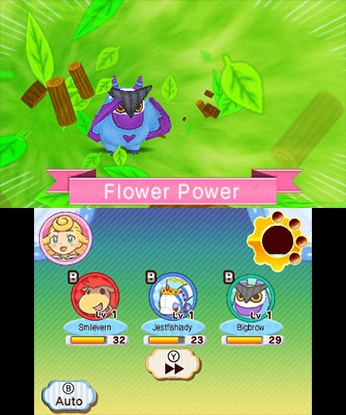 The game’s voice acting only in Japanese, which seems odd, as the game’s basicness means it is likely to primarily appeal to younger gamers – and kids aren’t as cool with their games being in a foreign language as teenage/adult Japanophiles are. But this is probably due to the game’s publisher not having enough money to record an English dub. Fortunately, the Japanese dub is good, and the game is not close to being fully voiced, so even those that aren’t fans won’t have to put up with much of it. Speaking of the Japanese voices, anime nerds and the like are likely to find something to enjoy her, what with the referencing of words like “tsundere”, and the whole setting of magical girls which will be familiar to any anime fan.

The first thing one will notice upon starting Moco Moco Friends is the hyperactive characters and excessively bright colours, with every creature cute and smiling. It is reminiscent of being in the Barbie aisle of one’s local toy store, but an effort does seem to have been made to appeal to older gamers, too. All the power-ups are different kinds of sweets, which is actually quite an amusing touch: a Waffle substitutes for the typical RPG’s potion, as it cures 20HP; a Wafer revives your Plushkins; different colours of Macarons cure the various status ailments, and so on.

The script of Moco Moco Friends can be quite witty, appealing to more than just its kiddie target audience. It does feature a lot of Japanese humour; Moco hears a word she doesn’t understand and assumes it’s food, and then starts thinking about how tasty it probably is. Other characters say, “Well, that’s typical Moco!”, and everyone laughs (apart from the person playing the game, assuming they’re more than 6 years old). But there are jokes cleverer than this, but one’s willingness to get to them depends on their tolerance for an equal amount of cringey jokes. The story of Moco Moco Friends is very basic (“collect this item to help you become a Plushkin Master and befriend all the Plushkins!”, etc), so don’t go into this expecting Final Fantasy VII or something. 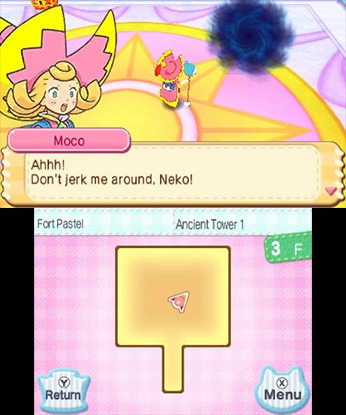 In terms of graphics, the game does look impressive with its aforementioned bright colours. A 3D effect is present, but sadly it is poorly implemented – I could see barely a difference with the effect on, which makes me wonder why they bothered including it at all.

Overall, Moco Moco Friends can be a fun diversion, but at this point in the Nintendo 3DS’ lifespan there are so many better RPGs one could be spending their time with, such as the various Shin Megami Tensei titles, Level 5 RPGs like Fantasy Life or Yokai Watch, or even weirder Japanese stuff like Conception II. But if you’ve exhausted all of those options, or if you just want an experience that’s a bit more light-hearted and sweet, then Moco Moco Friends is likely to serve you well, even if it won’t become your favourite game.