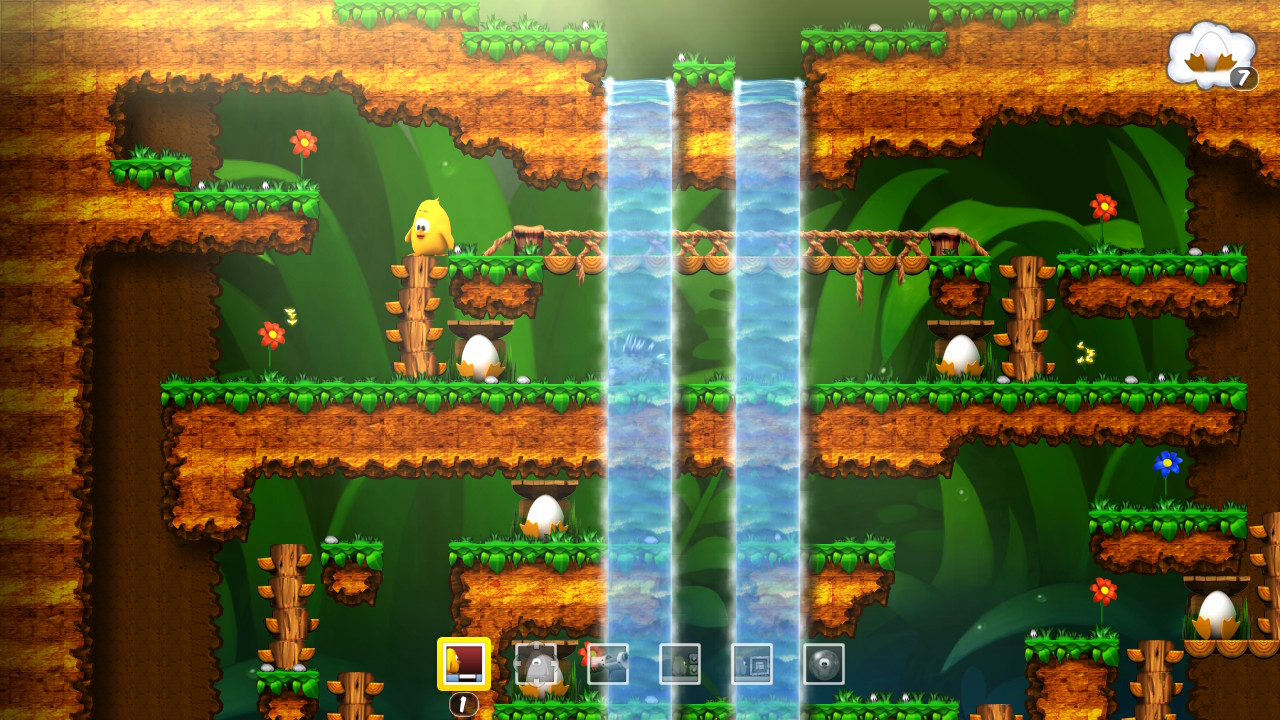 Toki Tori is one of those titles that feels like it’s been around forever, though I couldn’t put my finger on when it exactly started. A quick search reveals that 2001, on the Gameboy Color, was Toki’s first launch, and that seems borderline insane to me. Not only that it was so long ago, but that new Gameboy Color titles were made this millenia. In any case, Toki Tori has become this little staple that I’ve seen crop up again and again on a variety of platforms, from the original Wii to iPhones and, now, the Nintendo Switch. And with good reason: it’s still a fun and engaging puzzler.

Toki Tori is the tale of a flightless bird, living somewhere in the jungle, who’s younger siblings (portrayed as eggs with feet sticking out) have all become lost/kidnapped. A big, scary castle is at the eye of this mysterious egg-stealing storm. Toki has to brave a series of worlds, including some truly bizarre and innovative scenes towards the later half of the game Since this is a puzzle game at its core, the storyline isn’t totally important, but the concept is: rescue the eggs.

Since Toki can’t fly, he’s centrally only able to walk in lines and fall down without sustaining damage, but he also has access to a limited number of gadgets allocated to him at the start of each stage. These include items such as a freeze ray, a teleporter, a build your own bridge and a shower curtain, just to name a few. Though there is a little bit of free form at work here, the game ultimately expects you to use the gadgets in exactly the right places in order to achieve the best results, and it’s something that’s found through trial and error. There aren’t any stars or time bonuses, just “do it right,” which is almost refreshing. 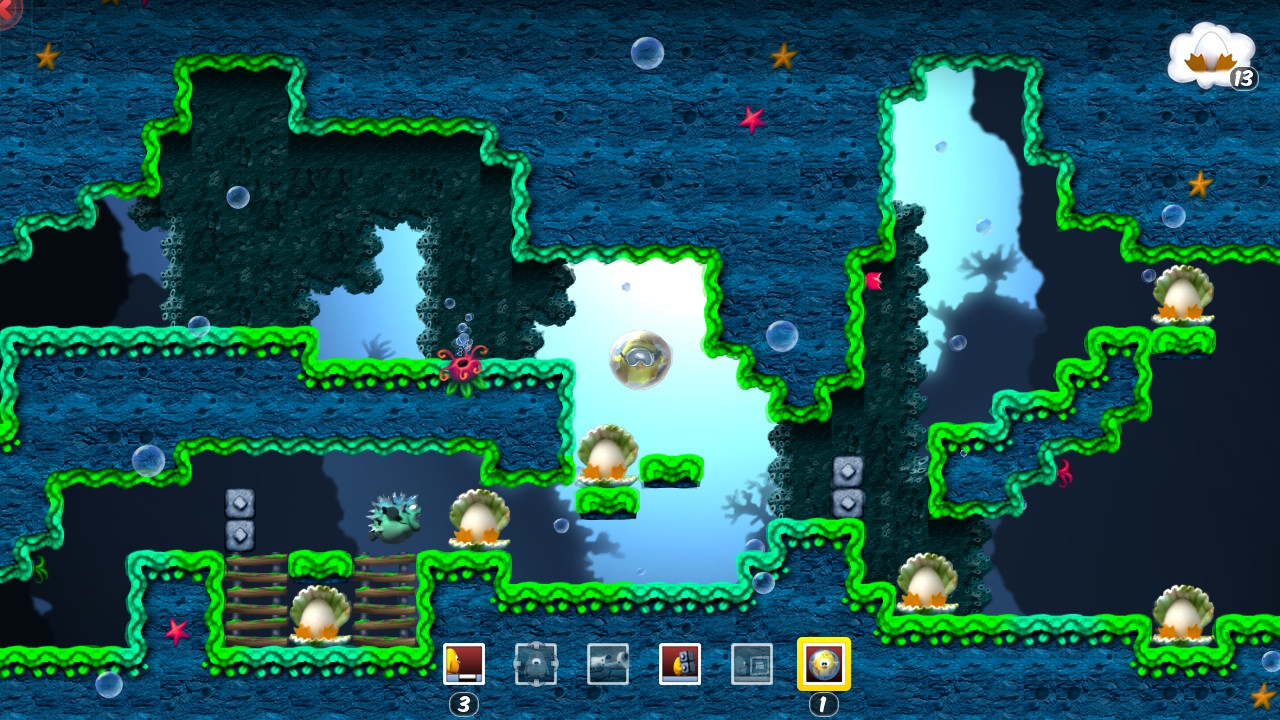 Toki Tori also has this cool time rewind mechanic (which means the title can’t be coincidence: “toki tori” would literally be clock bird in Japanese) which allows you to go back any number of steps in the process of the stage. Sure, if you’re close to the beginning or totally lost, you can just die and start over, but rewinding generally helps you out more. Besides employing a cool 1980s VHS effect, it allows you to kind of pick and choose what could and could not have been done better. Very often, the obvious path is the best one, and players should just take a moment at the start of the stage to plot out their path. Once that’s successful, the rewind is there for when you accidentally teleport right instead of up, or get yourself stuck in a hole prematurely.

The puzzles of Toki Tori waffle between “dirt simple” and “deep thinking,” but none of them should be too difficult that you need to give up entirely. In the case that you want or need to come back to one later, there’s this “wild card” that you can drop and skip over a stage with no penalties. However, it’s a single use: if you want to use the wild card again in the future, you need to go back and beat the stage you skipped. This is such a clever little implementation of advancement that it makes me grin every time. Toki Tori knows how to do puzzles and cute, and the idea of this yellow bird dropping a get out of jail free card and then coming back to grab it later is phenomenal. Not to mention it’s just the right amount of assistance. Two Tribes doesn’t want players to get fed up and quit, but just skipping multiple levels willy-nilly would be a waste of everyone’s time. 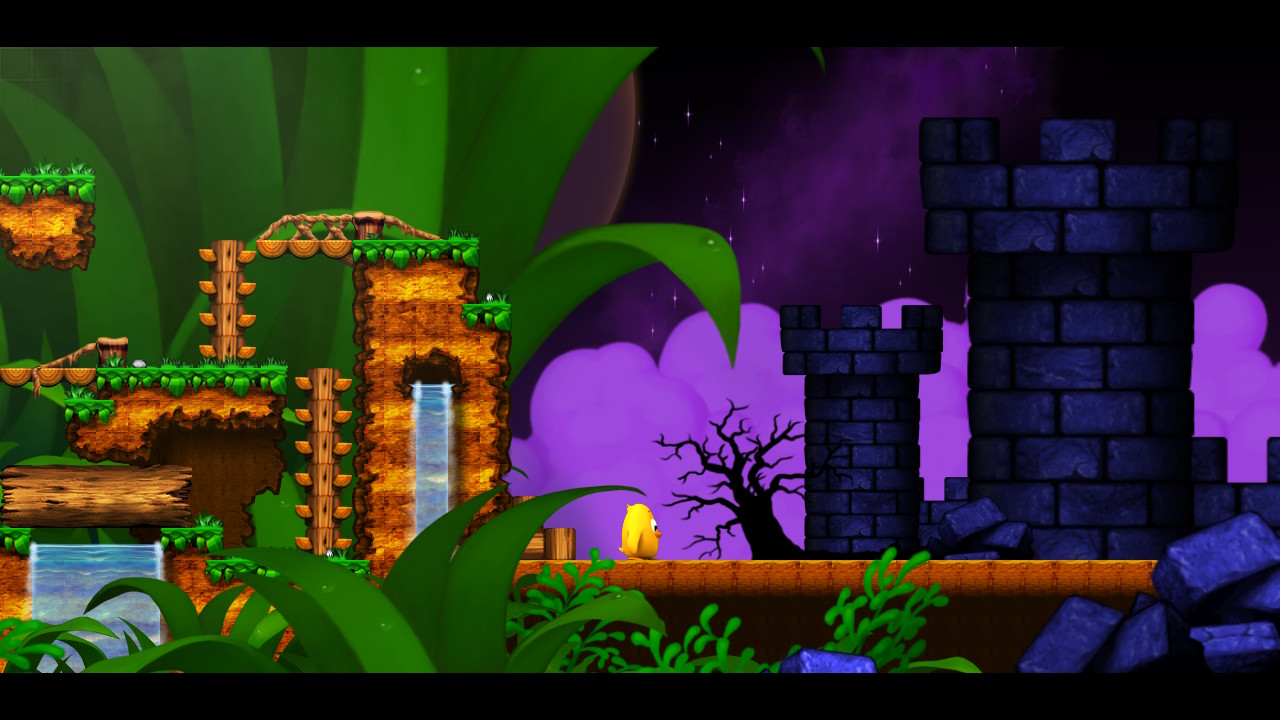 Now, as I mentioned up top, Toki Tori has been around for a while, and that may be a deciding factor for fans looking to get this installment on the Switch. On the one hand, it looks gorgeous, so this isn’t some Gameboy Color port: this is, at the very least, a variation of the updated, 2008 WiiWare success. But there’s so much more to it. The level editor exists, the full extent of stages (including the Labs) are available, and it runs at full 60fps. Moreover, there’s subtle and well done HD rumble included, which shows at least a bit of care and wonder on the side on Two Tribes. However, except for some borderline cosmetic touch ups, there isn’t a ton of new or interesting things happening. If you’ve played it before on any number of platforms, you get the gist of it, and that’s both good and bad. I mean, this doesn’t cost a fortune, and fans of the game in general will enjoy how well it runs and having it on the best portable console available. Still, if you were holding out for some of the “Nintendo Switch” edition style of extras (such as Toki Tori 2 boasts), you’re a tad out of luck.

Still, overall, Toki Tori is a fantastic puzzle game from beak to tail. It’s cute, it’s fluid, and it plays exceptionally well. I have hardly committed the puzzles to memory, so going back and dusting off some of my critical thinking really made for a delightful experience. Between the bonus stages, the hard mode and the extra pops, you’ll more than get your money’s worth, and there’s hours of puzzling to invest in, especially for the die-hard Toki Tori fan. Don’t let the age fool you: this bird can still sing.