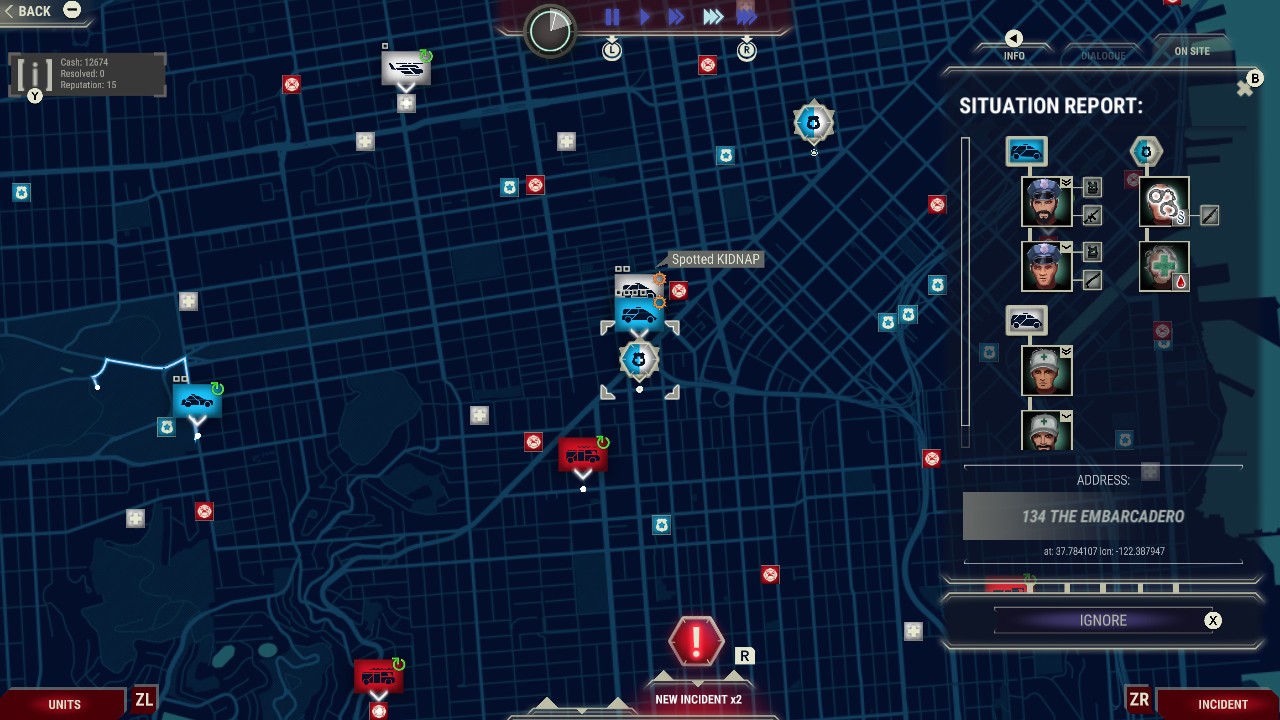 911 Operator was originally released in 2017 by Polish studio Jutsu Games. The game puts you in the role of a 911 emergency telephone services officer who must answer phone calls and dispatch police officers, paramedics, and firefighters to a wide range of emergencies. The newly released Deluxe Edition for Nintendo Switch gives players access to all of the game’s DLC packs, including the Every Life Matters DLC, Special Resources DLC, Search and Rescue DLC, and First Response DLC.

911 Operator has two main gameplay modes, Career and Free Game. In Career mode, you play through a series of 6 pre-set cities. You need to successfully complete a set number of shifts in each city before you can move onto the next. Your money earned or lost is carried over to tour next shift, and depending on your performance, this can either make the game easier or harder. If you perform well, then your staff will make it through most shifts unharmed, and will even get promoted sometimes. Promoted staff have better stats than their co-workers, and will make clearing later cities a bit easier. In Free mode, you simply select a city of your choice from a massive list of cities worldwide, and then start a shift there. You can play through as many shift as you like, with no real goal.

911 Operator’s gameplay revolves around unit management and quick responses. When starting a game, the first thing you’ll see is the squad setup screen. Here you can see each of your teams, each of which is one of three types. You have your police officer teams, your medic teams, and your firefighter teams. Each of these teams can be staffed by up to 4 people, and you can also assign up to two pieces of equipment to each person. There’s a shop available where you can buy reinforcements for your teams. Hiring more staff and acquiring new vehicles and equipment costs money, which you have a very limited pool of. You earn money during each game by quickly and correctly responding to each emergency. Performing badly will cause you to lose money, and also increases the change of your staff getting injured. Injured staff will have to rest during your next game before they can return to duty. It’s quite a handicap. 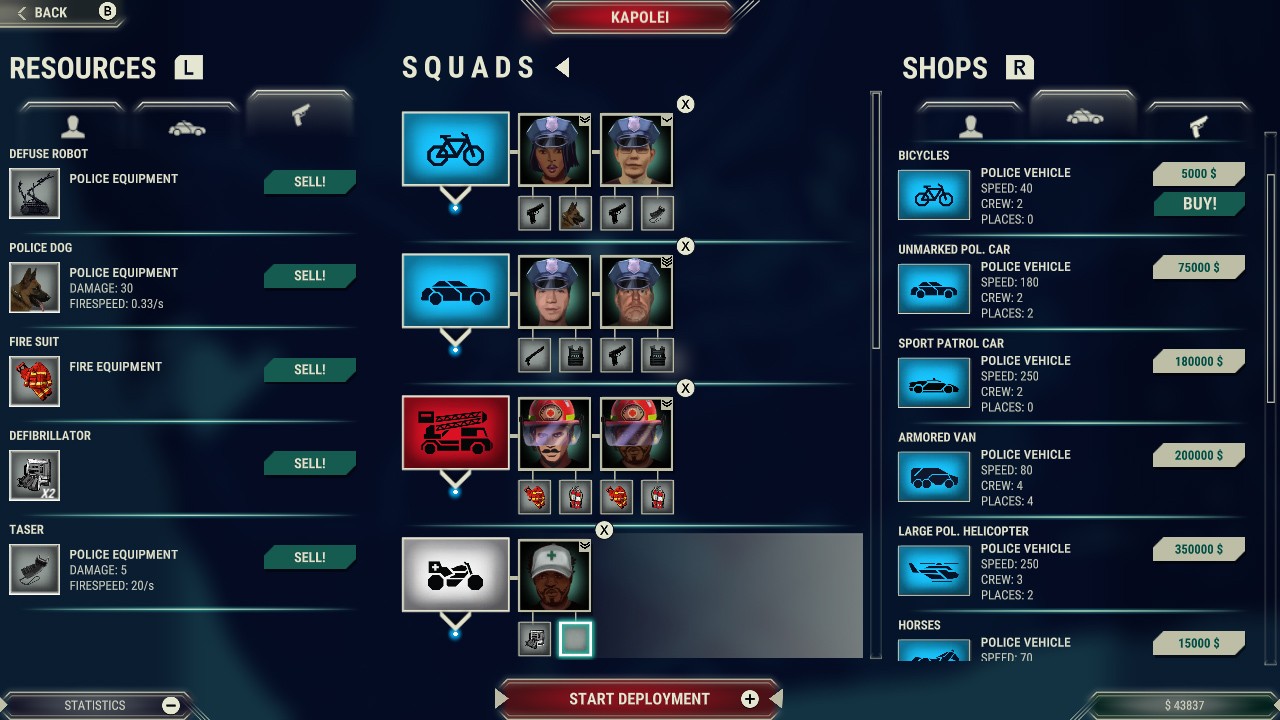 Once your teams are all set up, you’ll move on to the main part of 911 Operator’s gameplay, which is the map screen. This screen displays a detailed map of the city that you’ll be operating in this time, and there are a bunch of icons on top of it that represent your teams. Blue icons represent police, white icons represent medics, and red icons represent firefighters. The game encourages you to spread out your teams before starting the shift, to cover as many areas as possible. Once the shift starts, both calls and incidents come in as time passes. Incidents appear periodically as icons on the map, and these are colour coded just like your teams. Blue icons need you to send police to them, icons that are half blue and half white need you to send both a police team and a medic team, etc.

Meanwhile, calls in 911 Operator need to be actively answered by the player, and are more involved, requiring the player to listen carefully to what the person is saying. These audio clips featured a variety of different people, some calm and some panicking. Paying close attention and asking the right questions is important, and once the caller’s address is known, the player can send a team or teams like they would for an incident. The user inputs are very simple, all you need to do is select a team icon and then the incident icon and the team will head over to the incident. You then repeat this again and again until all incidents are either dealt with or failed and the shift is over. This is enjoyable enough for a few hours, but after that the gameplay starts to become repetitive. Clicking on icons repeatedly (which is the majority of the gameplay) gets old, so this is a game that is best played in short bursts. A notable problem is that the cursor used to select icons is too sticky, it will snap to the nearest icon when it gets within a certain distance of it. This can be a real problem when there are a lot of icons on screen at once and you’re trying to select a particular one. You’re likely to end up selecting a nearby icon instead of the one you want, and there’s no option to turn off the snap functionality or reduce its sensitivity. This happened to me many times while playing, and could be frustrating when I needed to send a team to an incident quickly and had to fight the controls to do so. 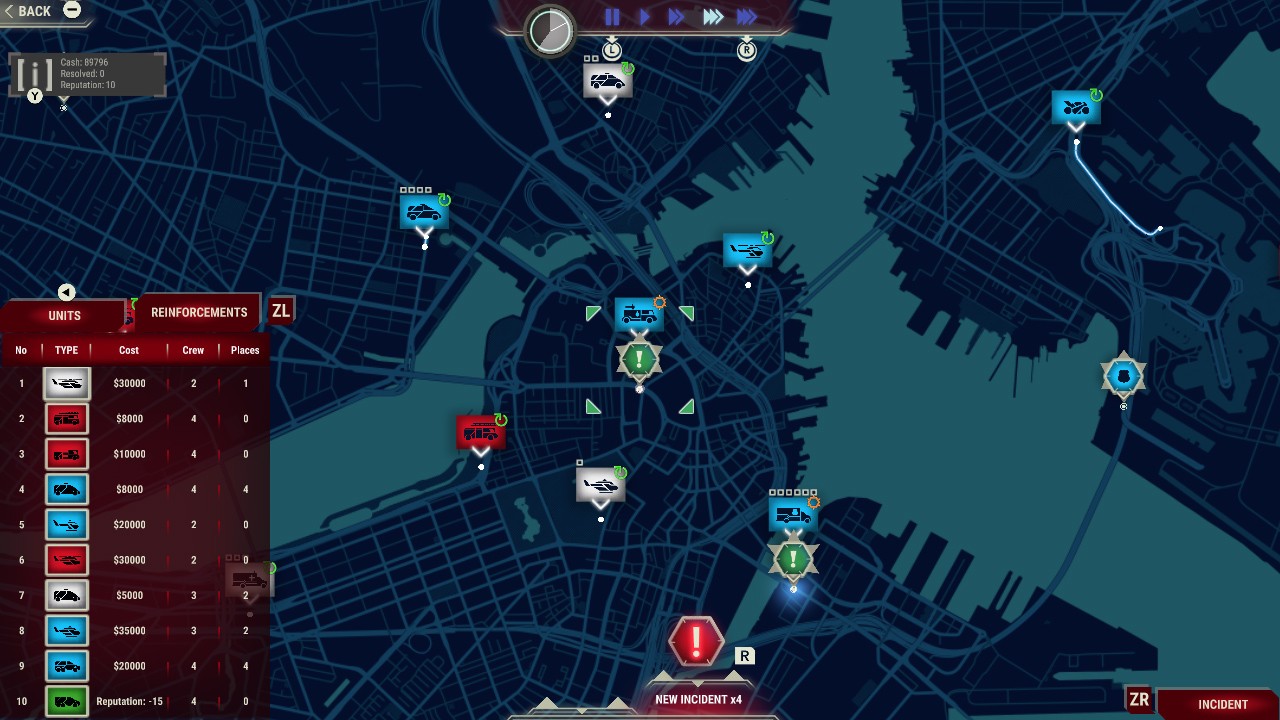 Visually, 911 Operator is a bit plain. The interface looks ok and gets the job done. The city maps aren’t that interesting to look at, and neither are the icons that appear on them. The icons all look pretty much the same as well, with only the colour changing, and there’s only a few different colours. It’s just not very visually interesting.

911 Operator’s audio is better, with the calls being the highlight. The calls are all audio clips featuring voice actors in the roles of the caller and operator, and there’s a good variety of emergencies to experience. The main downside is that outside of the career mode (where calls are limited), you can often have the same calls come in multiple times, and hearing the same audio clips repeatedly can get tiresome.

Overall, 911 Operator is a game that tries to be different. The idea of taking on the role of an emergency response operator is an interesting one, but unfortunately the gameplay lacks depth, and the visuals aren’t much to look at either. It can be enjoyable in short bursts, but even those will soon overstay their welcome. 911 Operator may be of some interest to people who are craving a break from the shooters, action and horror games that are currently dominating the market, but only as a budget title on sale.

Overall, 911 Operator is a game that tries to be different.