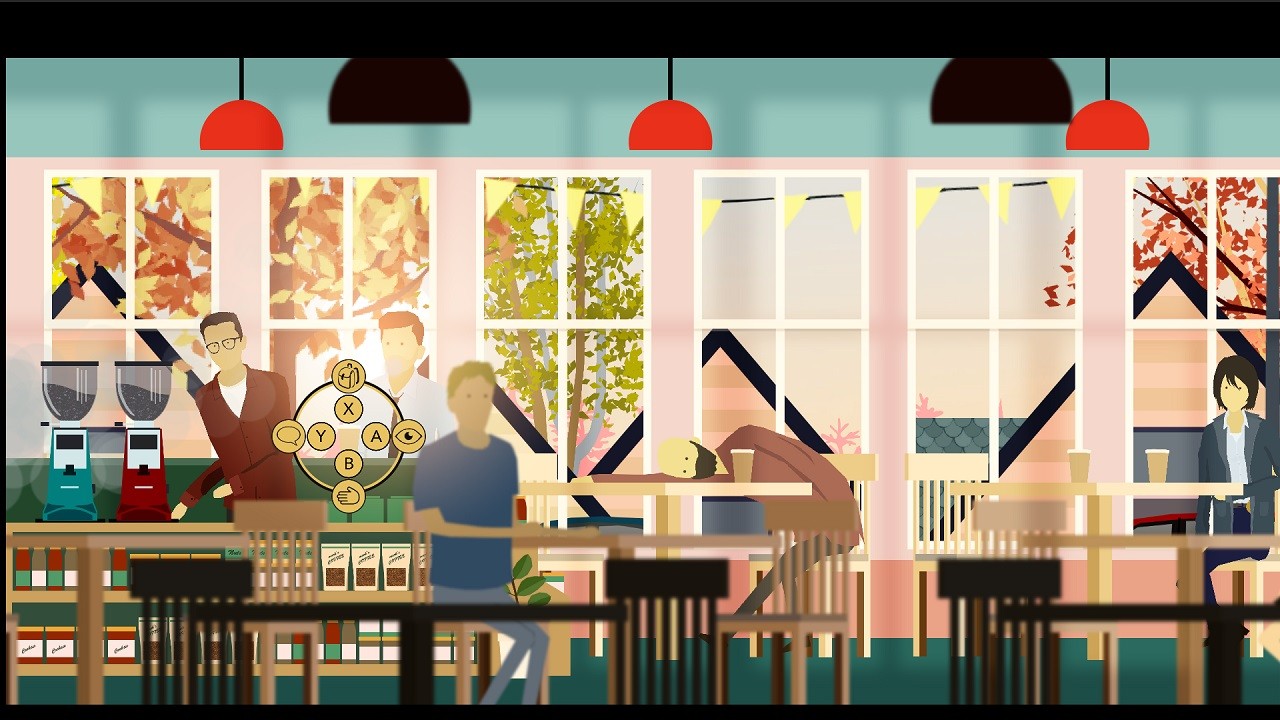 The world is a dark place. We all try our hardest to muddle through. You wish to push forward, yet your past holds you back. You try to put dark thoughts to the back of your mind, and concentrate on the positives, but you cannot see a way forward. People bury themselves in their work, or their hobbies to escape, but that only paper over the cracks. We must tackle our problems head on. That is the only way that we can truly be at peace with the demons from our past. This is the conundrum that you will experience in Frostwood Interactive’s Rainswept. A detective adventure title where you leave behind your job in the big city to help solve a murder in Pineview. Chris and Diane are a young couple who kept themselves to them themselves. The community did not welcome them, and their reclusive nature didn’t help. The discovery of their bodies starts the rumours rolling. Can you clear up this mystery and discover the true nature of this crime?

You control the troubled detective, Michael Stone. A man who lives for his job, he leaves no stone unturned, even when the crime in front of him looks to be a simple case to solve. Michael has a dark and troubled past that continues to haunt him throughout his journey. Can he control his emotions and solve the case? Or will this heavy fog better him and make him take drastic action? Given a strict timescale of 7 days to solve the murder, Michael must put friendships and the rules to one side. The local police see him as a joke, and a threat, and the townsfolk are inclined to lie to you. Everyone is a suspect in this tale of twists and shocks.

Frostwood Interactive has experimented with some tough and taboo subjects. Both the main protagonist and the victims have their issues. You must play the game as each of these characters, delving into their pasts, and seeing how it affects them. This is a short title, but it’s written in a caring and touching way. There are moments of shock, anger, humour, and despair. The developers have done a great job at building empathy towards each of the characters. I found myself flip flopping between who I liked and disliked. It wasn’t until the final scene that I could solve the case. This could be down to great writing, or my lack of detective skills. 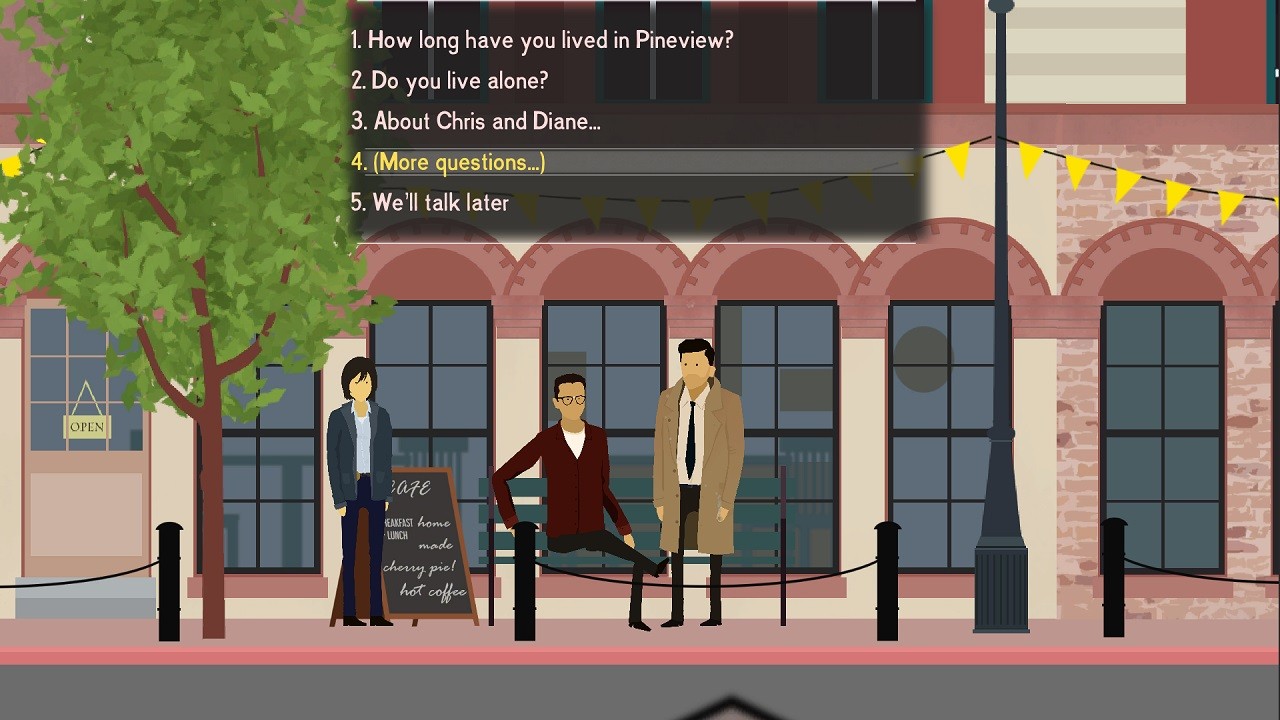 Labelled as a detective title, you’d expect Rainswept to make you search for clues to solve the case. This wasn’t what I experienced. I’d say that it was closer to an interactive novel than a detective adventure title. You have the freedom to explore the small town, and talk to most of the locals. Once you question them, you note that you have little choice in how this plays out. You cannot probe further on any points that interest you. The “suspects” provide you with answers to further your investigation, and you move on. Each day you must complete a set number of tasks. You extinguish this list, where you may be provided with further jobs, or you retire to your hotel. When detective Stone is alone, this is when the demons of his past surface. The end of each day was a dark and ominous point in the game. Only the most cold hearted amongst us will fail to find these moments poignant and emotional.

You may think “This sounds like a depressing game, why would I want to play it?” With many troubling themes, and a sense of despair, there are still rays of hope throughout. The locals have already made their minds up about our victims. They have tarnished their memories. Never welcomed within the community, their deaths have only compounded the issue. It’s your job to shed some light onto the situation and prove the townsfolk wrong. Michael has the opportunity to overcome his own problems along the way. Can he open up to the surrounding people, or will he keep his feelings bottled up? As the story unfolds, you see Michael warming to the people around him. He realises that he cannot change his past, but he can control his future. This is truly heartwarming and makes wading through all the pain worth it. You will finish your playthrough will a warm fuzzy feeling. Solving this case helps to put his life into perspective. The people of Pineview realise they should have been more welcoming. If they had, this unfortunate situation would not have occurred.

As the plot twists and turns to its conclusion, I thought there could be several outcomes. I hoped that I would have some input into who I arrested, and accused of the crime, but this wasn’t the case. There is only one outcome, no matter how you approach the last chapter. It would have been nice if the developers allowed you to solve the murder, even if you were wrong. It would have helped pull the game away from the novel feel, and back to the adventure roots. It could have also given alternative endings to how Michael deals with his own issues. This would have increased the replay value of the game.

As the game plays out, you’ll experience moments from Michael, Chris and Diane’s life. It will flit between the past and present, and it’s an emotional roller coaster. Each scene helps to explain the characters’ pasts. They show how they met, and the underlying issues that have formed their lives. The cinematic helps to piece together the story, and it’s well designed in both content and pace. None of them give too much information, and you are still left guessing how the crime happened right to the end. Using A minimalist approach throughout, it helps you to focus on the story, and the emotions. With a distinct hand-drawn art style, and an autumnal colour palette, it gives a warm and rich feeling. The surreal nature of Michael’s subconscious will make you feel uneasy. This is where most of the taboo subjects are explored. Delivered in a tasteful, yet graphic form, it will resonate with a lot of players. I love the presentation of this title, a perfect blend of romance, and dark disturbing images. It never went too far away from the theme and helped the story flow. 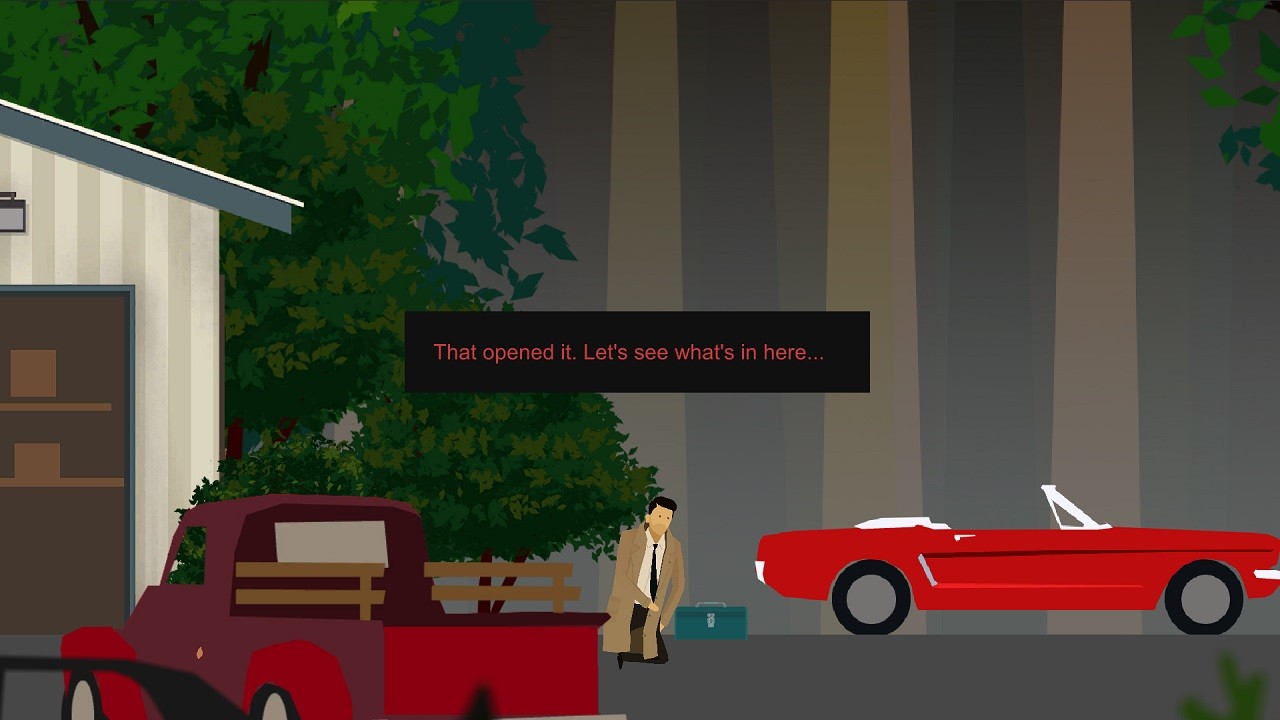 The audio is an atmospheric treat which I adored. An original soundtrack by Micamic (The Cat Lady). The music sets the scene perfectly throughout. A balanced and emotive score accompanied every scene. It never overpowered the imagery and pushed the story forward. The sound effects of the weather created a feeling of emptiness. This solidified Michael’s state of mind, and to a lesser extent both Chris and Diane’s story. All the narrative was delivered by text, this reinforced the visual novel feel. I would have liked to have heard some voice-over work for the characters’ thoughts. This would have added a new layer, which would have given each of the protagonists some more depth.

This 2D adventure asks you to move from point A to point B, with the occasional diversion. Items that need a closer look at are highlighted with a yellow magnifying glass. If several are in close proximity, the control system makes it easy to select the one you want. A radial menu highlights your options, and the button you must press. An almost nonexistent inventory means that any items collected are used immediately. This reduces the puzzle nature of the detective genre to almost nil. It was a shame, as I would have liked to have to search for clues by completing mini-games. As it is, you don’t work for the answers; they are delivered up on a plate for you.

I have already mentioned the replay value of this game, and how it could increase. In its current build, you will invest around 5 hours of your time solving this crime. You unlock all achievements through natural progression. Well, you would if they weren’t glitched. For my account, I could not get 2, one which the developers are aware of, and the other was a bug. The developers are working on a solution. Anyone wanting 100% can rest assured that 1000 Gamerscore is an easy task. With no alternative endings to work towards, there is little reason to return. Luckily, the story is so well told that you’d happily experience it again in a heartbeat.

Rainswept is a beautiful and dark tale. It will make you think about your life choices, and how you treat others. It’s described as a detective adventure, but for me this is a little misleading. For me, it’s an interactive adventure novel in the police genre. Other than gathering evidence, and smoking cigarette’s, you do very little police work. Detective Stone should put down the fags. He chain-smoked about 500 during my playthrough. If I put this to one side, as it is rather minor, so much about this game is brilliant. The story is touching and full of emotion. The presentation is unique and laced with despair and hints of melancholy. An audio that sucks you in and keeps you wanting to play. Other than its few shortcomings, this is a game that I would recommend. Can you solve the crime? Are you strong enough to overcome your demons with the support of others? Sure you are! Don’t allow your past to control your present and future.

Can you solve the crime? Are you strong enough to overcome your demons with the support of others? Sure you are! Don’t allow your past to control your present and future.