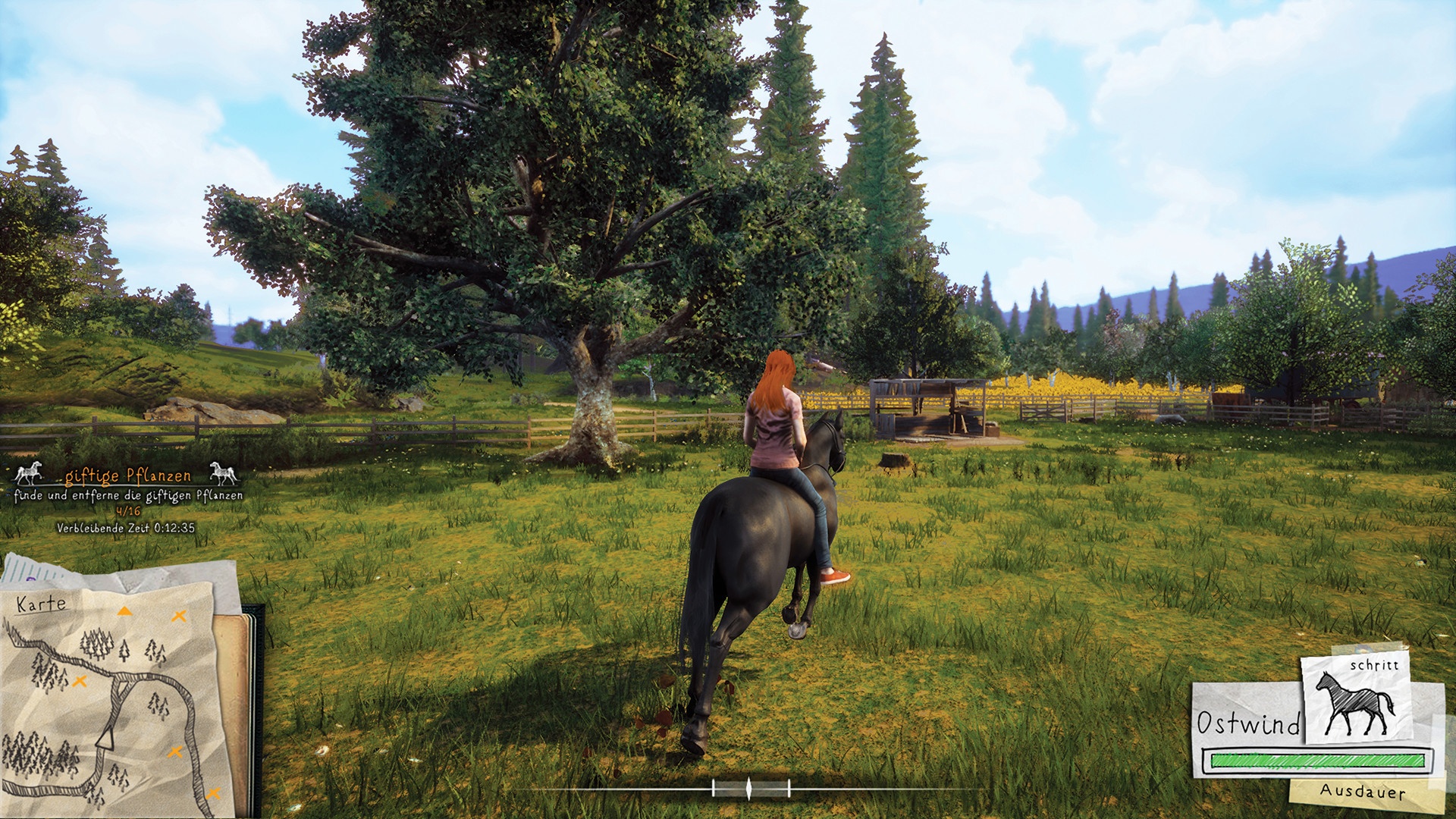 I have to admit that I’d never heard  of Ostwind-das Spiel or Windstorm before; not until at least the video game representation of its series had galloped a release onto the Nintendo Switch. In truth, the series follows the themes of a successful series of books and films that revolve around a black stallion, named Windstorm, and it’s owner Mika within the setting of the Kaltenbach estate. The series itself revolves around the developing friendship between the girl and her horse and her discovery that she is capable of horse whispering. In essence, it’s a feel-good dramatisation, much like this video game, as its main premise involves exploration and ensuring the well-being of your horse.

The game takes place around various locations of the estate in which Mika and the black stallion reside. Through a series of tasks, you set about discovering locales that are featured in the novels and film, taking photos and interacting with characters. As well as this, you must also look after your horse, keeping him in top condition in order to maintain the means to explore. The area in which get to explore is suitably large and holds all kinds of discoveries and secrets. In the past, many horse-based titles have come with a very cartoony-aesthetic. However, Windstorm has gone for a more realistic approach, with some truly beautiful sceneries, such as the rainbow that hangs over a waterfall and small copses that radiate the filters of the sun. This graphical style creates a more immersive experience for the player, especially with its elements of freedom to explore at your own pace.

Although the developers have gone for a realistic approach in the environmental settings of the game, thankfully the maintaining and riding of your horse has been simplified to a more playable level. Riding and controlling your horse can be done with relative ease, with a brief tutorial that gives a good oversight on how to look after and ride your horse. Running, jumping and cantering is extremely easy to utilise and control, adding further to the relaxing delights of exploring the estate of Kaltenbach. As in other horse-styled games, the maintenance of your horse comes in the form of a mini-game style, with objectives such as grooming, cleaning hooves and changing horse-shoes. 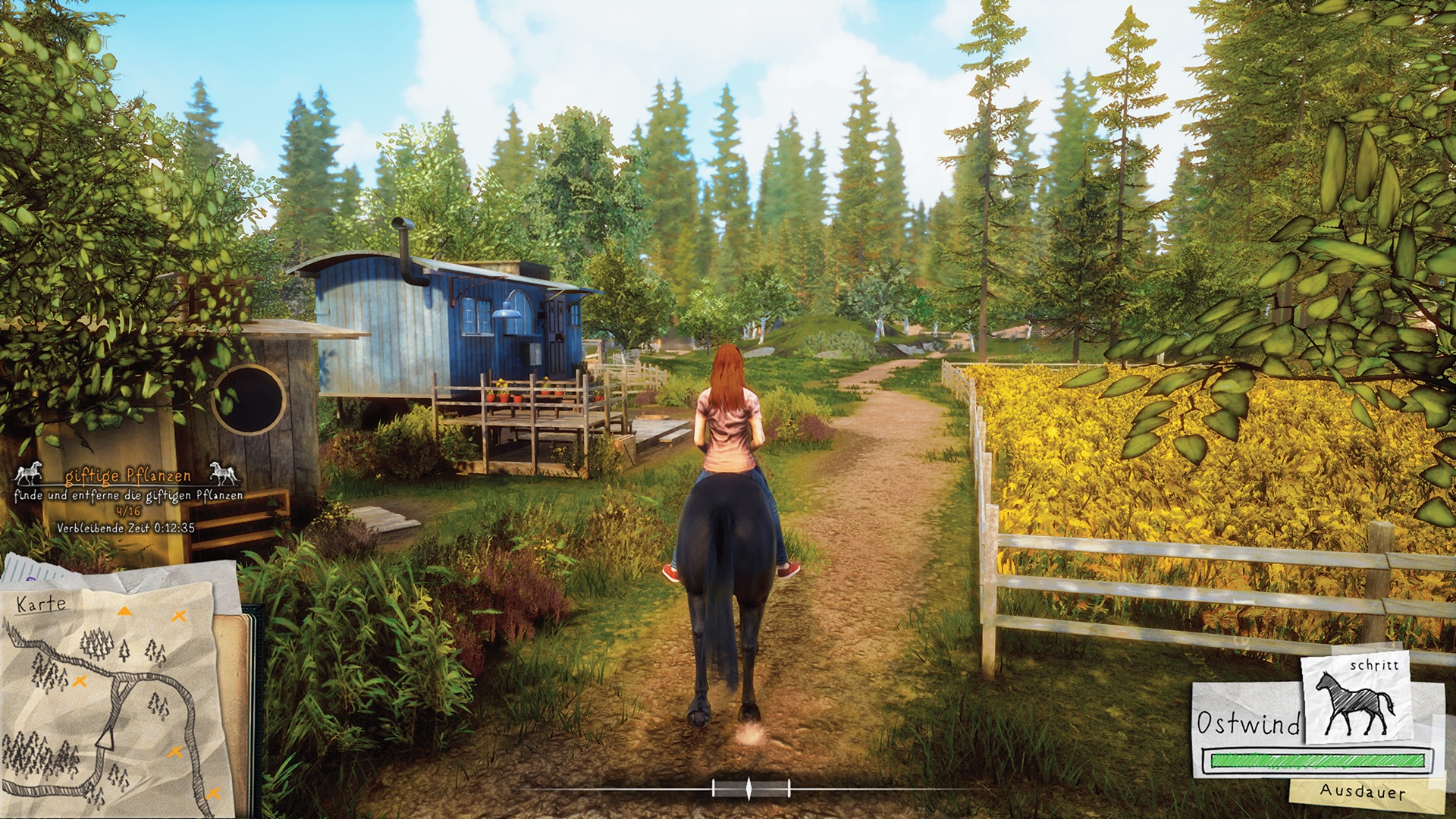 If there’s one thing that the game does really well, it’s to capture the essence of horse-riding and everything that comes along with it. There’s no urgency for anything here, just simply looking after your horse, riding it and exploring the landscape, making this an ideal title for any younger players who hold a fascination with horses or dream of one day owning such an elegant animal. The tasks that are presented to you are executed well and easy to follow and although they provide an element of gameplay, they do serve another purpose too. Progression through completing the tasks, also pushes along a story element within the game as you play alongside the known stories of the series, as well as discovering some new themes that revolve around Mika’s being within the estate.

Despite this being an easy flowing game with no urgency or danger, it contains enough variety or interest in its task to keep it entertaining; although the overall length of the game only runs into three to four hours; at least it did for me, but I’m an experienced gamer. For  younger players, there’s a lot more value here as I’m sure it would take a bit longer to play through for them. The design of the game and the way in which it has been modelled, makes it an ideal casual experience; especially with its relaxing style of gameplay and freedom in a lot of elements to play the game how you wish. 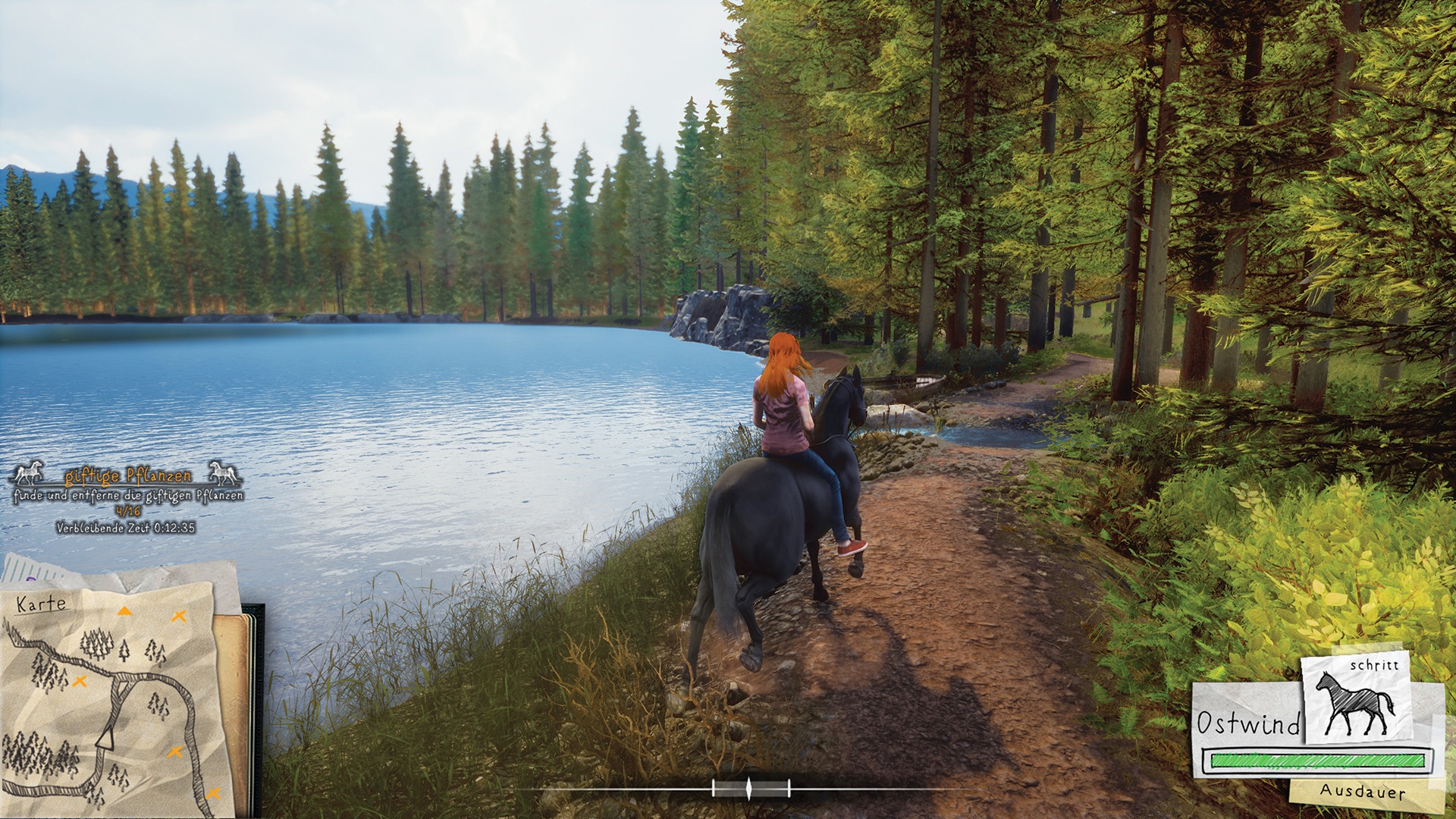 Despite this being a new release for the Switch, it has seen previous releases on other platforms. The good news is that you’re essentially getting the same experience here, as say as on the Playstation, but previous releases have been marred by technical performances and game-breaking bugs. Unfortunately, some of the technical issues still remain here on the Switch, mainly in the elements of some animations, texture pop-ups and the odd frame-rate issue. However, throughout my playthrough of this title, I didn’t encounter anything that was game-breaking or particularly buggy. Despite some technical difficulties, I can’t say that any of them really detracted me from my overall experience or really ruined the game for me; although at the same time, they can be a little distracting or annoying.

Despite this, the main premise of the game is quite enjoyable to play and, in my opinion, is the best horse-related title that I have played; I’m not going to include Red Dead Redemption in this though, as that’s a completely different kettle of fish and in a far superior league to this title. However, if you’re looking for a horse-game on the Switch, then this one is most definitely the best one you can but for your money. It offers a nice change of pace from your usual video-gaming affair. There’s no danger of death, or any urgency in completing any of its mechanics; it simply conveys what horse-riding is all about, relaxing in the countryside, taking in the scenery and enjoying the bond between you and your horse. In terms of those qualities, this is a title that recreates those elements in a good way.

Overall, Windstorm is quite an enjoyable little title. It holds a lot of appeal for fans of the series, or for young audiences who love horses. It’s realistic settings offer a nice environment to explore, as well as an immersive quality that keeps you playing. Everything here is simply executed, making it a pleasurable game to play and although the story isn’t really that interesting, it just about holds enough to keep you invested. There are some technical issues with this title, but they’re never game-breaking; at least, in my experience they weren’t, although I do admit that they were slightly distracting or annoying at times, but again, these may not necessarily be something that bothers a young player so much. If you can see past its faults, then what you’re left with is quite an enjoyable, quirky title that offers enough to make it a worthwhile purchase and in terms of owning a real horse, presents a much cheaper alternative to the real thing. All in all, it’s a relaxing and fun game, but only if its subject matters interest you.

At last! A game that actually contains everything there is to love about horse-riding.