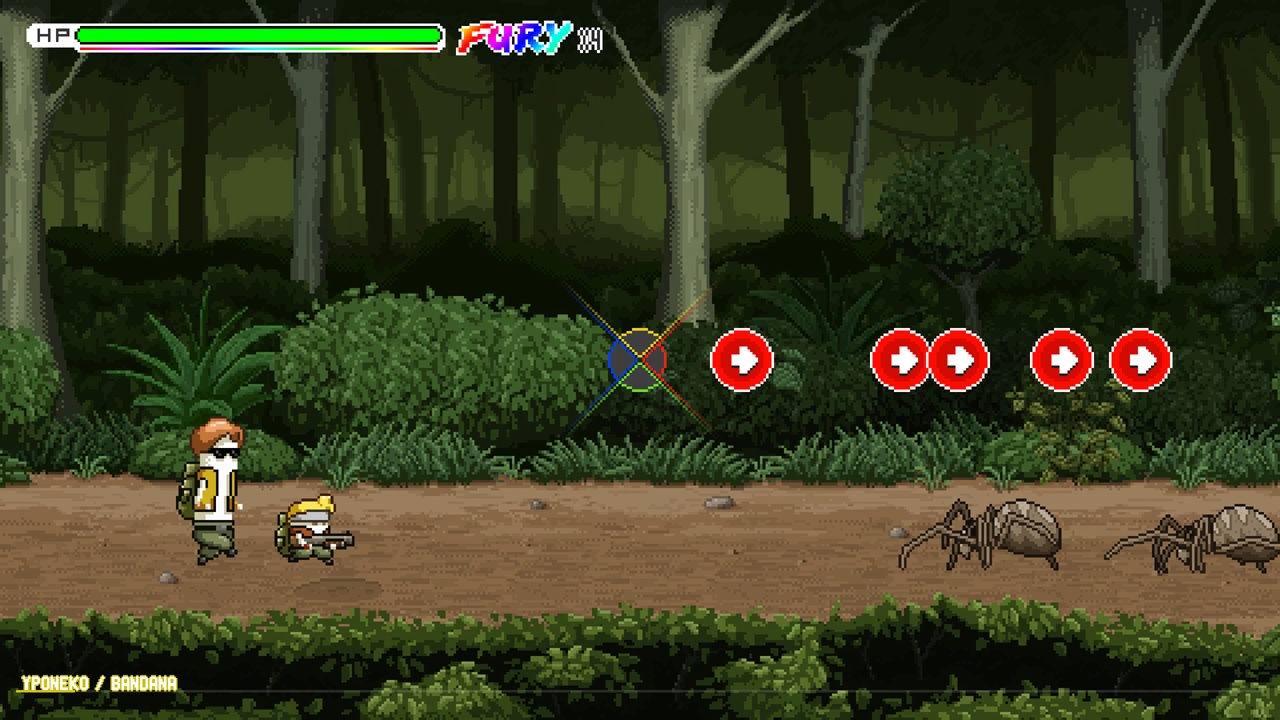 Chiptune is a type of music that never seems to get the recognition and respect that it deserves. Sure, it’s generated a decent fanbase nowadays, but the mentality that goes along with it seems to be almost entirely dismissive. Many simply catalog the music as “bleeps and boops,” as one Doctor Shyguy once said, and the assumption is that there’s no real variety or range to the sound. As video games have evolved and everything around them has changed, pixel art has often been given a certain gravitas, with people either taking it and turning it into high art (Iconoclasts, Owlboy) or at least throwback creations (Just Shapes and Beats, Retro City Rampage). The music of the era, though, is still brushed aside as just a nostalgic celebration, something that the 8-bit generation can laud and enjoy but doesn’t necessarily have the appeal that modern scores can attack. So I’m pleased and even surprised to say that Old School Musical does one thing incredibly efficiently and well: it reminds you that there was a TON of variety in those old tracks.

Old School Musical is the story of Tib and Rob, two brothers who were being raised by a masochistic and potentially psychotic being known only as Mother on a far distant island. Tib and Rob were always told that they would one day be the guardians and protectors of the world, but that’s hard to listen to and digest when you’re being beaten with spiked whips and forced to sleep in the woods for nights on end. One day, quite unexpectedly, Mother disappears, and with her departure comes the glitches. The entire island begins to glitch out, and Tib and Rob are forced to take Mother’s departing gifts (a strange remote control and an instructional letter) and flee to lands unknown. Now somewhere far above the world, they use a massive spaceship to seek out Mother, teleporting down to worlds across the universe that all bear a striking resemblance to places that we (the player) may have visited in years gone by. But it’s not the time to get all starry-eyed with recognition: Rob and Tib need to save the damn universe, and to do that, they need…rhythm.

Old School Musical is a chiptune based rhythm game with the primary inputs being either the control buttons and the ABXY setup, plus shoulder buttons at times. The game defaults to a “normal” difficulty for story mode, but easy and hard are both options after you get through the first few songs. In order to get the music right, you must push the appropriate directional button as it appears in the colorful crosshairs in the center of the screen, or, when the input changes, hitting the left or right shoulder button as a bar lines up with the silhouette. There are long hold notes, hits on the half and quarter beats, and plenty of times when it’ll seem like arrows are coming from all directions. Thankfully, you can mix it up as you play, as the ABXY and control buttons are mapped to the same inputs, you can alternate hitting things with either your left or right hand, thus making it significantly easier to get tangled up in a variety of different beats. In fact, if you have any history with some of the other rhythm games on the Switch (VOEZ, MUSYX or even DEAD SPIKE-SAN), you should be able to move the difficulty up to hard right away to get a real challenge out of everything. 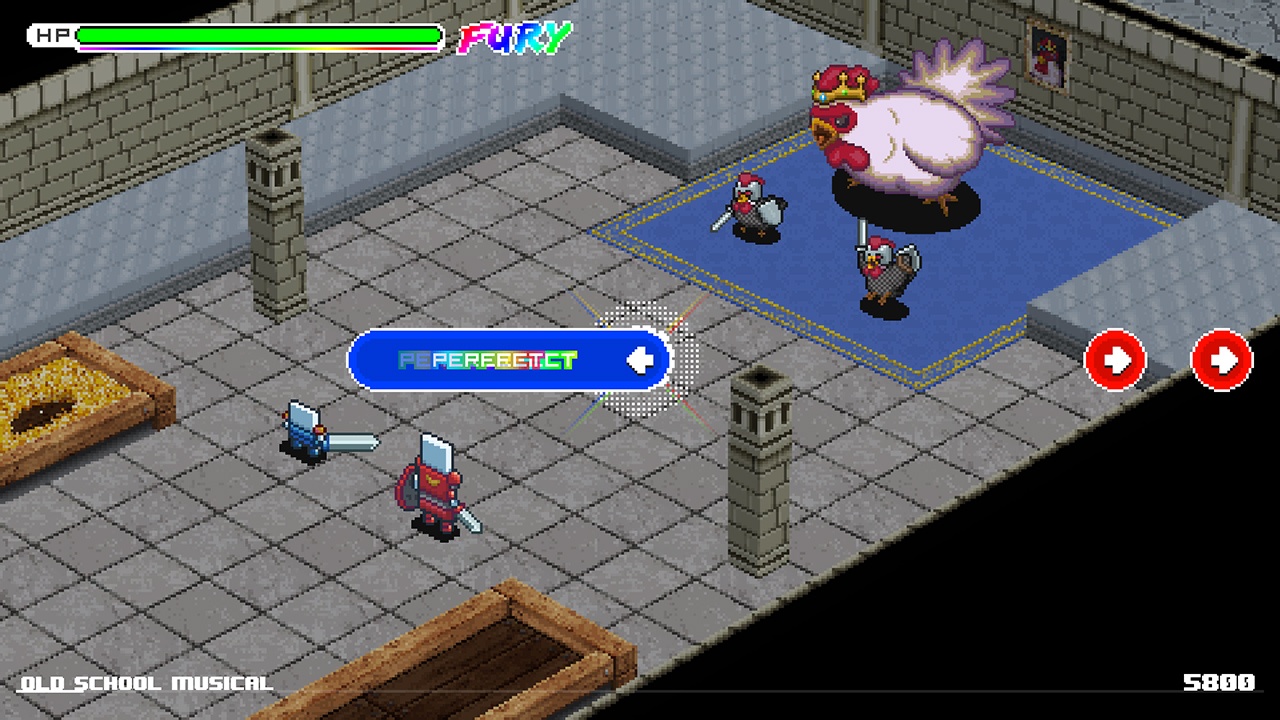 OSM does a decent job of helping get people attuned and set up for the game right from the beginning. I appreciate that the developers took the time to have a couple of minutes where people can basically figure out and have the game auto-adjust to input delay based on their reaction times and hearing. As someone who has finally started to go deaf after years of abusing my ears, it’s reassuring that I can essentially create a good slope of reaction so my score is based on my actual playing skill and not my age. For people who seriously have no rhythm and just want to enjoy the music and the story, you should be able to brute force your way through the first couple of songs to get aboard the spaceship, at which point you can opt for easy difficulty from here on in. The easy is…exceptionally easy. Like, “look down at your feet to confirm what arrow you’ll step on next” DDR levels of easy. Normal has just a little bit of spice to it, and hard will have your fingers flying to mash the notes in time (though the shoulder buttons never really felt like they achieved the same level of difficulty as the mainstay controllers). Your success in story mode will only net you an overall percentage of excellency: if you want a score-based appraisal, head to arcade mode.

The centerpiece of the game is, obviously, the soundtrack, and Old School Musical does not disappoint by running the gamut of many 8 and 16 bit references and pastiches throughout the entire play. Everything from Mega Man to Final Fantasy gets a nod here, with the latter being a bit more subtle (listen to the sound effects on top of the control tower). Some are very clear and easy to identify: after all, the Tetris theme song has been something that’s so ingrained in many player’s minds that it doesn’t matter that it pops up during an impromptu Gradius/Star Fox scene. Some are immediately going to tug at your brainstem to convince you to remember them, but there will be plenty of visual representation to help jog your memory. Granted, things like Outrun have become so referential in recent years that the music would have stood out even without the hilarious car chase, and I’m actually still doing my best to place a certain sound effect that crops up when the boys visit IsoCity near the beginning of the game.

It’s worth noting that some of the best music (in my opinion) doesn’t crop up until after the main story mode is finished. Without spoiling too much, the description of the game specifically mentions chickens, and there’s an entire second mode to unlock called Chicken Republic. This seems to be where the team decided to fit in all the music that had been created that didn’t quite work with the main storyline/areas that Tib and Rob visit during their initial quest. Not only are the better tracks located here, it’s also where the difficulty finally finds a good amount of pacing. Normal mode is okay all the way through, but it feels like it lacks a certain gradience (especially since the final song is pretty easy compared to the Breath of Fire nods that came before it). Chicken Republic not only has fantastic tunes, but it utilizes a good amount of mixing for notes (instead of lining everything up to a single color) as well as some unfair modifiers. When the notes start pulsing in size, spinning in place and occasionally developing lens flare to throw you off your game, that’s when you know you’ve made it. 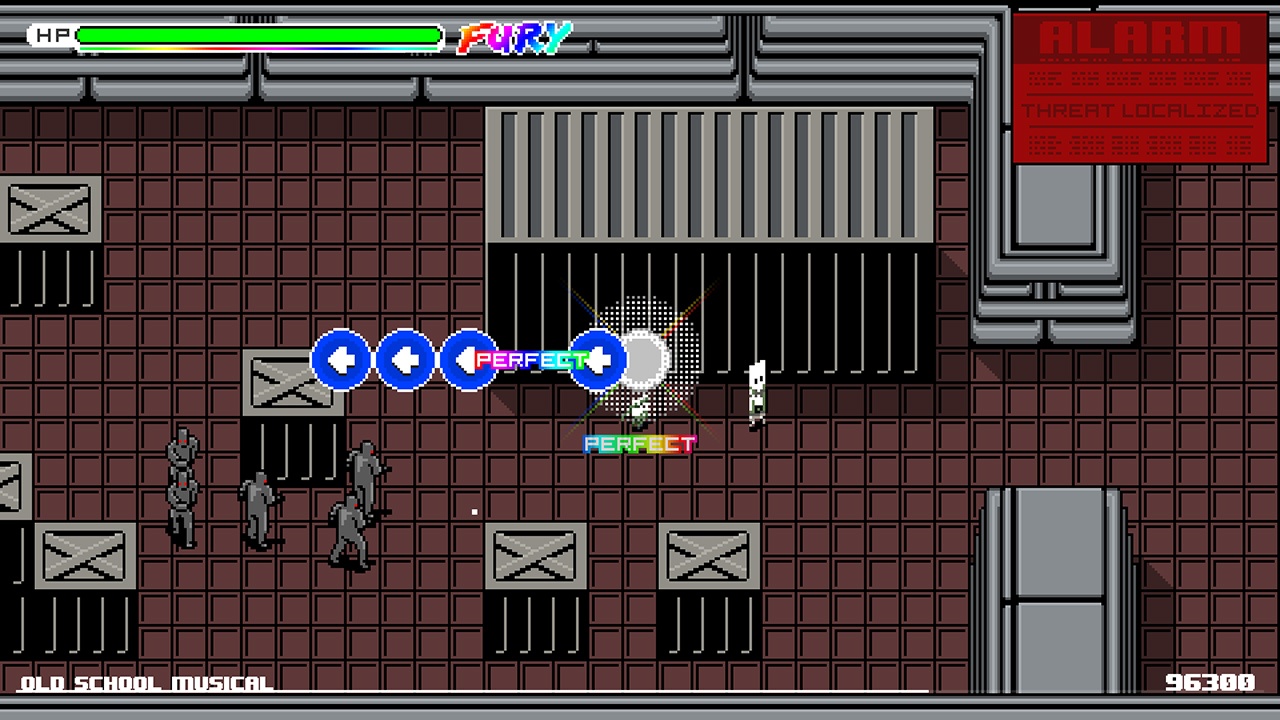 For me, Old School Musical’s tone and story are a little bit of a letdown. In the beginning, after a rather dramatic introduction that’s super reminiscent of a combination of Kingdom Hearts and Secret of Mana, the game suddenly gets quirky, funny in irreverent, making it feel like the opening was a bait-and-switch, which I loved. Then, after some hilarious scenes (including Rob dressed as Quiet from Metal Gear Solid), the game takes on this weird, serious tone again. We still have humor mixed in, and the entire Breath of Fire world works wonderfully, but the game never regains the same kind of silliness that we were promised from the beginning. Thankfully, there’s enough content in terms of the musical execution and the arcade mode to distract from the turn of events that keeps the game from achieving true hilarity. Though, I must admit, this game has probably my favorite Game Over screens of all time, and it’s worth failing just to see everything that went into it.

Multiplayer mode exists, and it’s good to have friends along to keep the beat going and to compete for a stronger score, but it’s definitely not the bread and butter of Old School Musical. It’s a nice addition to give the couch drivers who insist they could do better a chance to put their money where their mouths are and allow everyone a chance to play. Also, for my kids to mash along to some pretty dope music that they’re just now beginning to identity, including what sounded like a Pokemon inspired tune. Seriously, play through Chicken Republic to unlock all the extra music, the joy of the journey more than makes up for the surgically removed storyline.

And that’s the big takeaway with Old School Musical. The soundtrack is, for lack of a better word, amazing. It’s evocative and original in the same note, and really does a massive service for the game, the composers, and the games from where they drew inspiration. Even though I wish the story could have gone more along the Pop Team Epic route and less the Generic Saviors route, it’s still endearing enough, and I did love Tib and Rob as a dynamic duo. If you’ve got love in your soul for chiptune, this is the next natural addition to your Switch.

Even though I wish the story could have gone more along the Pop Team Epic route and less the Generic Saviors route, it’s still endearing enough, and I did love Tib and Rob as a dynamic duo.