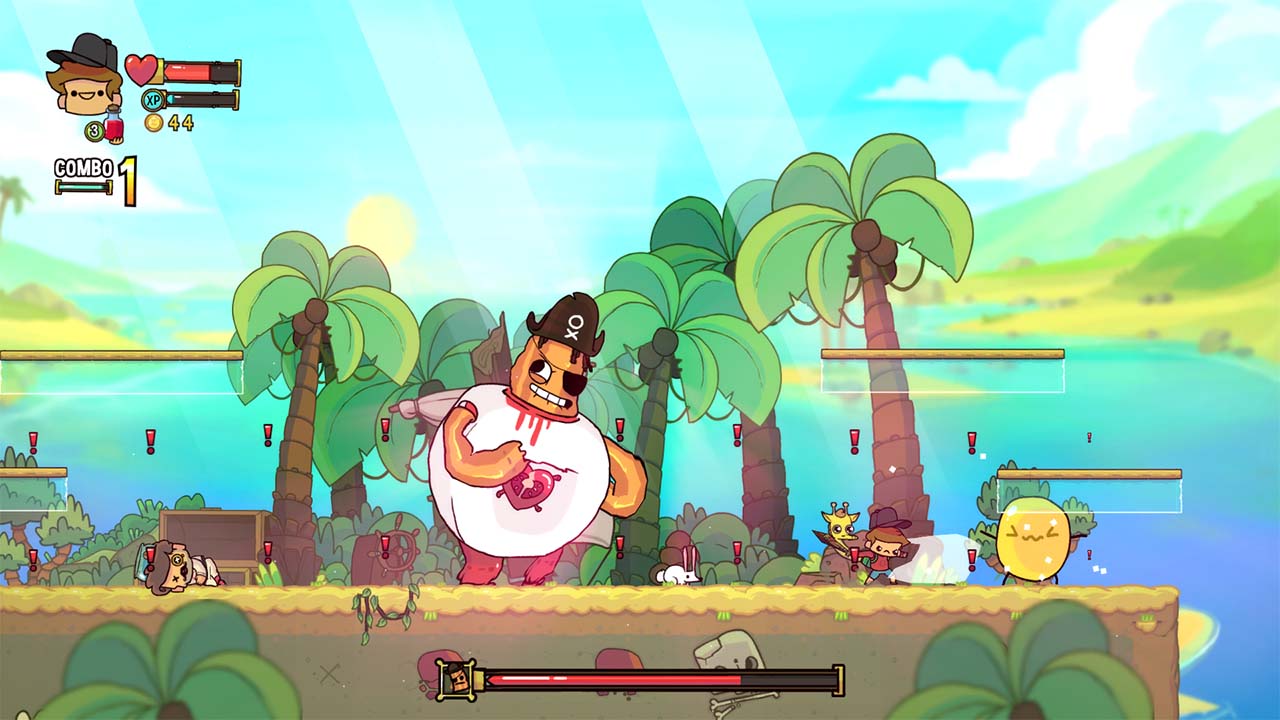 In the past few years, we’ve seen the kids entertainment industry, especially in animation, go from slightly whimsical and funny to outright oddball and almost surrealist. This isn’t a bad thing: it feels like the humor elements and jokes that get thrown out in a 15-30 minute spanse are more intelligent and relatable. It also encourages kids to think outside the box when it comes to certain approaches to problem solving and critical thinking, just because you are never quite sure what could and couldn’t work. But there’s no denying that the intentional shift away from traditional kid tropes and towards the “OMG random” phase of things results in some strange decisions and outcomes. For Massive Monster, the creators of The Adventure Pals, this could have been a disaster. Luckily, with some solid design concepts and executions, this little off-the-wall title is a genuine treat.

You, the Player, have just gotten your big birthday surprise: a brand new giraffe! Naming it Sparkles, you’re about to have the best birthday ever, when the mean Mr. B appears and kidnaps your Papa. Specifically with the intent to turn him into a Hot Dog, which isn’t as bad as it sounds when you realize there’s a magic spell that turns people into Hot Dogs. Anyways, you want your Papa back, so you set out to figure how exactly that will be accomplished. Pay the ransom? Offer an exchange? Just be a rootin-tootin adventurer and win him back? Aided with your sword, your hat, and your good friend, Mr. Rock, it’s time to set out on a real adventure!

The Adventure Pals is an overly cartoonish adventure platform game with a heavy, heavy focus on collecting and enjoying while doing so. Each area that you enter is chock full of places to jump, enemies to defeat, coins to collect and secrets to find. Most of the navigation is done by simply moving from place to place via jumps and wall jumps, occasionally using Sparkles’ helicopter tongue to help you navigate safely down long falls. If you miss, you can, early on, get the ability for Mr. Rock to protect you from spikes down below, though he won’t be of much use against the explosive jellies, Hot Dog people or random aggressive animals that could wait below. Thankfully, the fall may be worthwhile in finding anthropomorphic cupcakes to feed to the Cupcake Cat, who will then lay an egg that should contain a new hat inside. 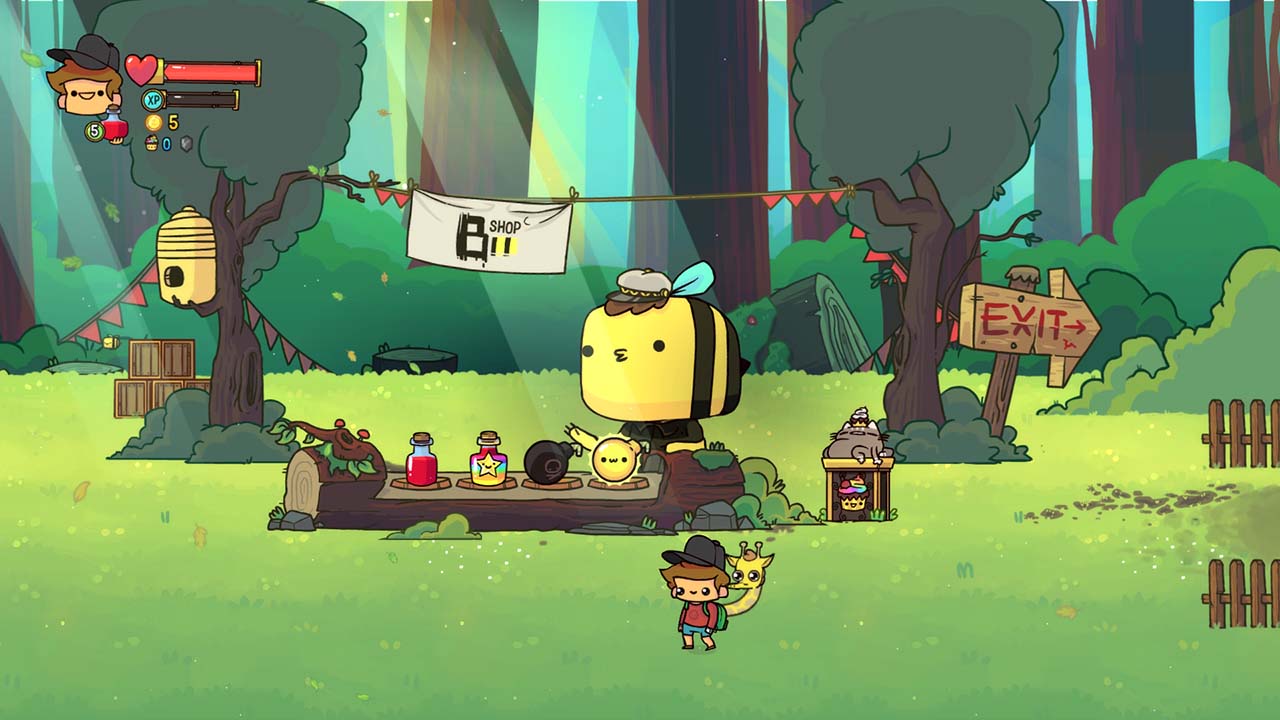 It seems appropriate to stop here and address the oddball nature of The Adventure Pals. There are moments, quite a few of them, when the game seems to be trying almost aggressively hard to be “unexpected,” and it has the potential to rub people the wrong way. An early quest that you find is someone whose wife has run away, and he weepingly follows you to try and get her back, riding on the back of a chicken the whole time. A couple of stages in, you find his wife, who is definitely a pig, certainly not a talking pig, and the two of them fly off into the skies together, the chicken apparently capable of flight and the pig just flying because why the hell not. Now, this style and approach to humor and quirkiness can quickly and easily rub people the wrong way, and I was almost in that boat. After all, a giraffe that you keep in your backpack instead of constantly riding around is not only strange, but also a waste of resources. If you find yourself easily put off by this kind of design, you have a choice: you can either not play it, which is more than fair, or you can try to look past it and dive into the game itself. I encourage the latter, because, after you deal with the overall tone of things, the game is really quite delightful.

The levels are quite well designed, incorporating a lot of nooks, crannies, timed access to places and overall strong structure in terms of making it a combination of exploratory and directional. I was actually unable to find one of the bigger secret spots, which are the stickers that are hidden throughout each major level, until I purposely went back and explored again a second time. The five cupcakes that you can discover start out very obvious, and they never reach a point of “fake wall behind a fake tree” sort of hidden, but you do need to put in the effort to head that way, often overshooting the goal in order to gain access. The coins you find ultimately move towards purchasing certain upgrades and items, like invisibility potions, incredibly cool bombs, and having extra potions for when you get beat up a bit. Early on, you won’t want to purchase them from the Bee Market, as the golden chests scattered throughout are affordable and always contain one, but, eventually, the price for the chests skyrockets and you’d do well to invest between levels.

Another aspect of the game that I didn’t think I’d like as much was the combat and XP system. Even though there’s technically a very simplistic approach to battle, The Adventure Pals carves out a cool niche by making interactions with foes something a bit strategic. For example, waiting and hitting enemies at the right time could cause a chain reaction of explosions that might do a lot of the heavy lifting for you. A well placed bomb might weaken enemies enough that you’ll be able to rush in and finish the job without worrying too much. And, if you take on enemies one-on-four, you can use some fast reflexes to dodge, stab, and flee, keeping your combo high and sustaining minimum damage yourself. The XP system, which comes from blue experience orbs that each enemy drops, eventually leads to new skills, including an early one that allows Sparkles to drag you into continued battle if your combo is higher than five. That means that, as long as you’re facing the right way, you can keep slamming away on enemies, and no amount of scattering will save them if they’re in sight. You don’t have to choose this skill: several levels give you a choice of what you’d like to add, which plays more into your gaming style. Defensive, offensive, ranged, etc…there’s a lot of possibilities inside this rather innocuous system. 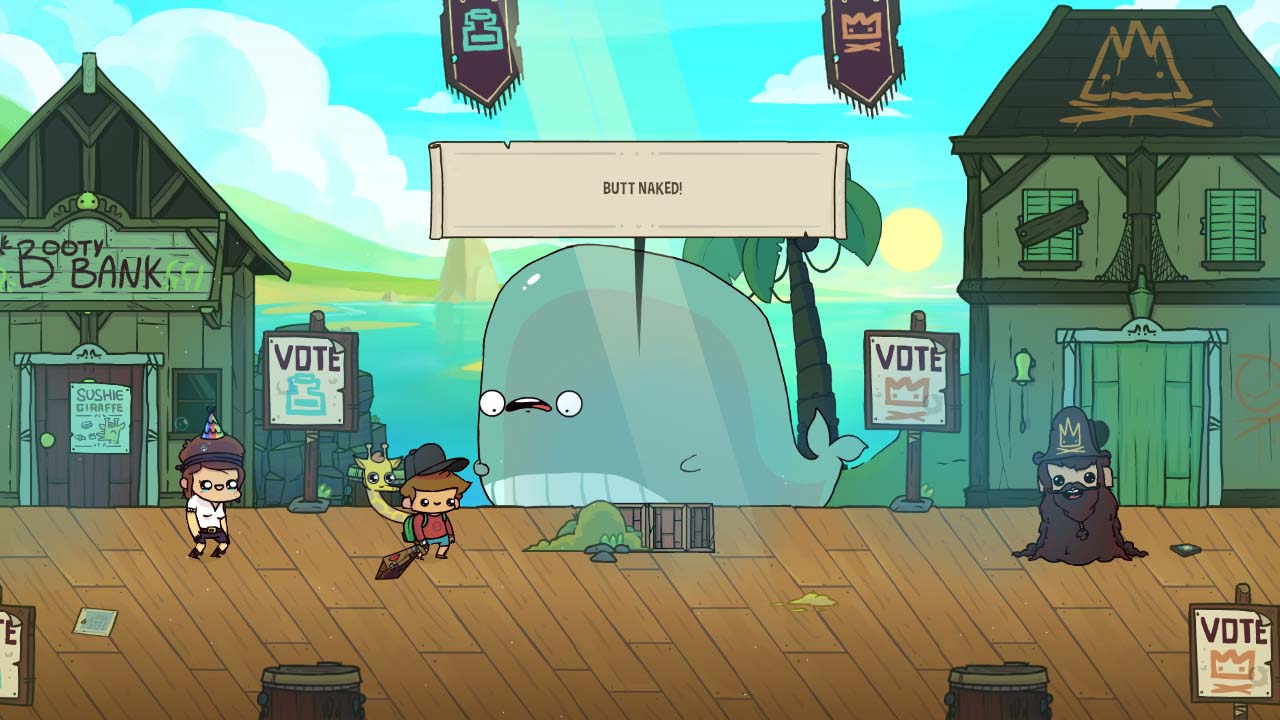 What makes The Adventure Pals work, overall, is Massive Monster’s graphical and audio presentation of the whole package. The music is this upbeat, jaunty and driving soundtrack that sounds lifted straight out of a Cartoon Network show that must not be named despite some similarities. You feel like you’ve gotten roped into a real adventure from the word drop, and, thanks to some clever writing and great one liners, you never lose sight of that ideal. Every time you get another side quest from the townsfolk, you broaden your scope, pulling in more of this whimsical world and seeing how far and wide the idea of The Adventure Pals stretches. There’s hints at the edge of every map and ocean that there might be something else just out there, something as weird and wonderful as what you’re seeing now, before your very eyes, and it’s done so without longing or the feeling of a missed opportunity. When the adventure is complete, it’s like you’ve wrapped up a really good, double length episode of your favorite cartoon, one that you’ve had more control over and more connection with than usual. I’ve never heard of these characters before, but I was on board, and I was better for it.

For adults, The Adventure Pals is a great departure from even the most benign platforming game, giving you a bit of fluff and silliness to compliment a whole bunch of wall jumping, demon smacking and using your giraffe as a crescent wrench. For kids, this is an easy game to get sucked into, and could absolutely be a cornerstone in building more interest in metrovania style games in the future, though none may be quite as odd as this one. In short, The Adventure Pals is a pretty great time, and a fantastic deal at its current price. Consider it for any Switch with a couple of kids at home, regardless of age.

Between this and the Teen Titans Go! movie, my kids had a seriously great weekend.