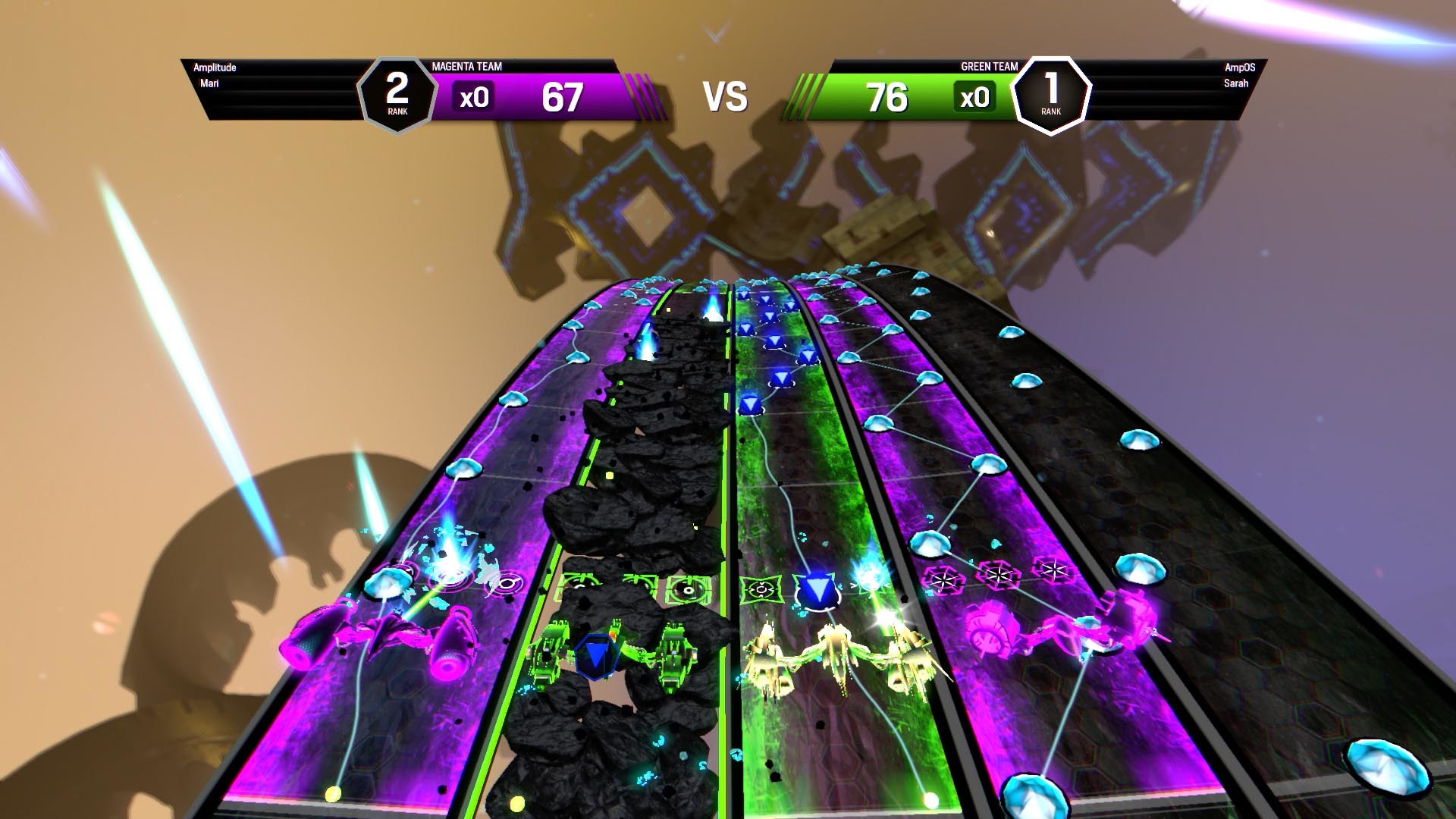 PaRappa the Rapper, Vib-Ribbon, Amplitude and its predecessor, Frequency; I am only now truly experiencing these genre defining classics from the PSone and PlayStation 2 era. It’s a genre that, beyond the latter peripheral-based likes of Guitar Hero and Rock Band, completely passed me by. I was aware of all of these games of course, but honestly, I hadn’t played a single one of them. That all changed back in 2014 at the Game Masters exhibition at the National Museum in Edinburgh. I went there primarily to get my hands on the impressive collection of 70s and 80s arcade cabinets that were the centrepiece of the exhibition, but shockingly, to me at least, was the fact that the game I ended up playing most was the PSone musical curio, Vib-Ribbon.

While that game has since been released on the PlayStation Network (pick it up if you haven’t already), playing it reminded me of all those other bizarre rhythm action games from the late 90s and early 2000s that I had missed first time around. Well, now I’m up to scratch, and of all the games I played, the one that I probably spent the most time with was Harmonix’s, Amplitude. Very similar in nature to the more recently released, Rock Band Blitz, Amplitude sees you jumping between vertical tracks representing different elements of a musical track ranging from vocals and bass to synth and guitar. Despite the bizarre inclusion of a space ship to actually run the music lines and to play beats by essentially bombing notes, Amplitude will feel immediately familiar to anyone who has spent time with any of the more recent, well-known action-rhythm hits. 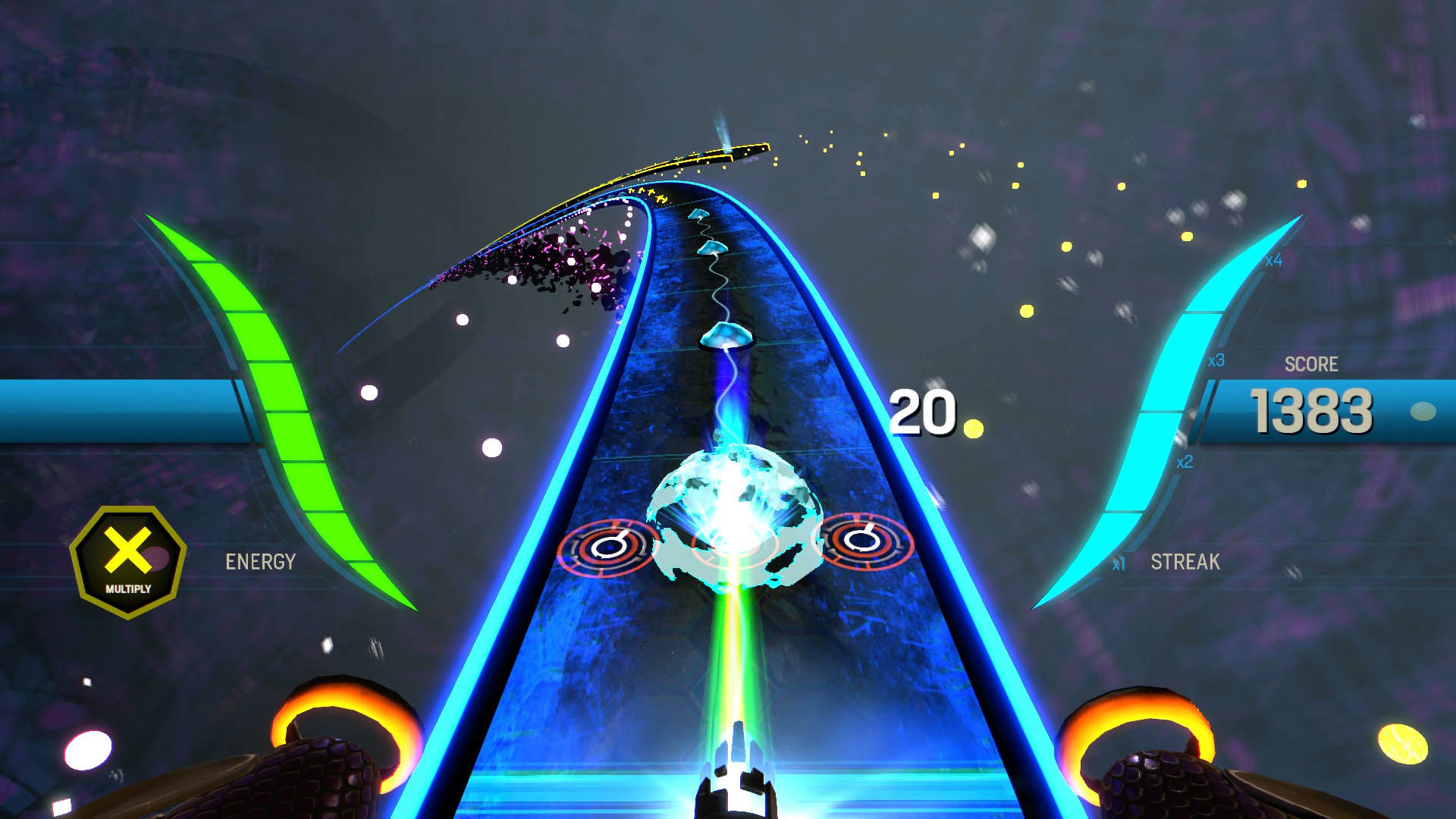 The same is true of Harmonix’s Kickstarter funded sequel/remake, the aptly named, Amplitude. It’s the same name as the original and, for the most part, it delivers almost the exact same experience. This is a game designed for the fans and Harmonix haven’t seen the need to mess with or over complicate what was, and still is, an undoubtedly winning formula. The only difference in fact is the music – and that’s the one major problem here. The original released on the PlayStation 2 back in 2003 had a fantastic soundtrack that included the likes of, Run-DMC, Weezer, David Bowie, Blink-182 and Pink. It was an eclectic soundtrack and was all the more memorable for it. It’s pseudo sequel though, yeah, that clearly hasn’t got the same budget and is instead reliant upon a 30 strong collection of unlicensed tracks (15 of which were actually created by Harmonix). It’s a very electro-heavy collection and obviously can’t compete with the impressive track list of the original, but despite the lack of household names, the collection put together here is actually very strong and certainly has its own share of memorable tracks.

More importantly, despite the soundtrack falling short of its predecessor, the gameplay is as strong as ever, and that subsequently puts Harmonix’s Amplitude (2016 edition) amongst the finest games in the genre. Some players will always prefer the peripheral driven experience of a Guitar Hero or a Rock Band, but for the more single player oriented gamers out there such as myself, there is no beating the simplicity of a gamepad and the more traditionally, ‘gamey’ vibe of an Amplitude. In fact, for those looking to go solo, Harmonix have added a single player campaign that somehow manages to add a semblance of story to what is one of the more conceptually abstract games around. Based around the Harmonix-created concept album, this Innerspace-like campaign, while relatively short, does add some much-needed structure and a solid sense of progression to the experience. I’m not convinced that locking the vast majority of songs behind progression in this mode was a wise choice, but I for one was happy with its inclusion and felt ready to tackle the higher difficulty settings once I had made my way through that initial run. 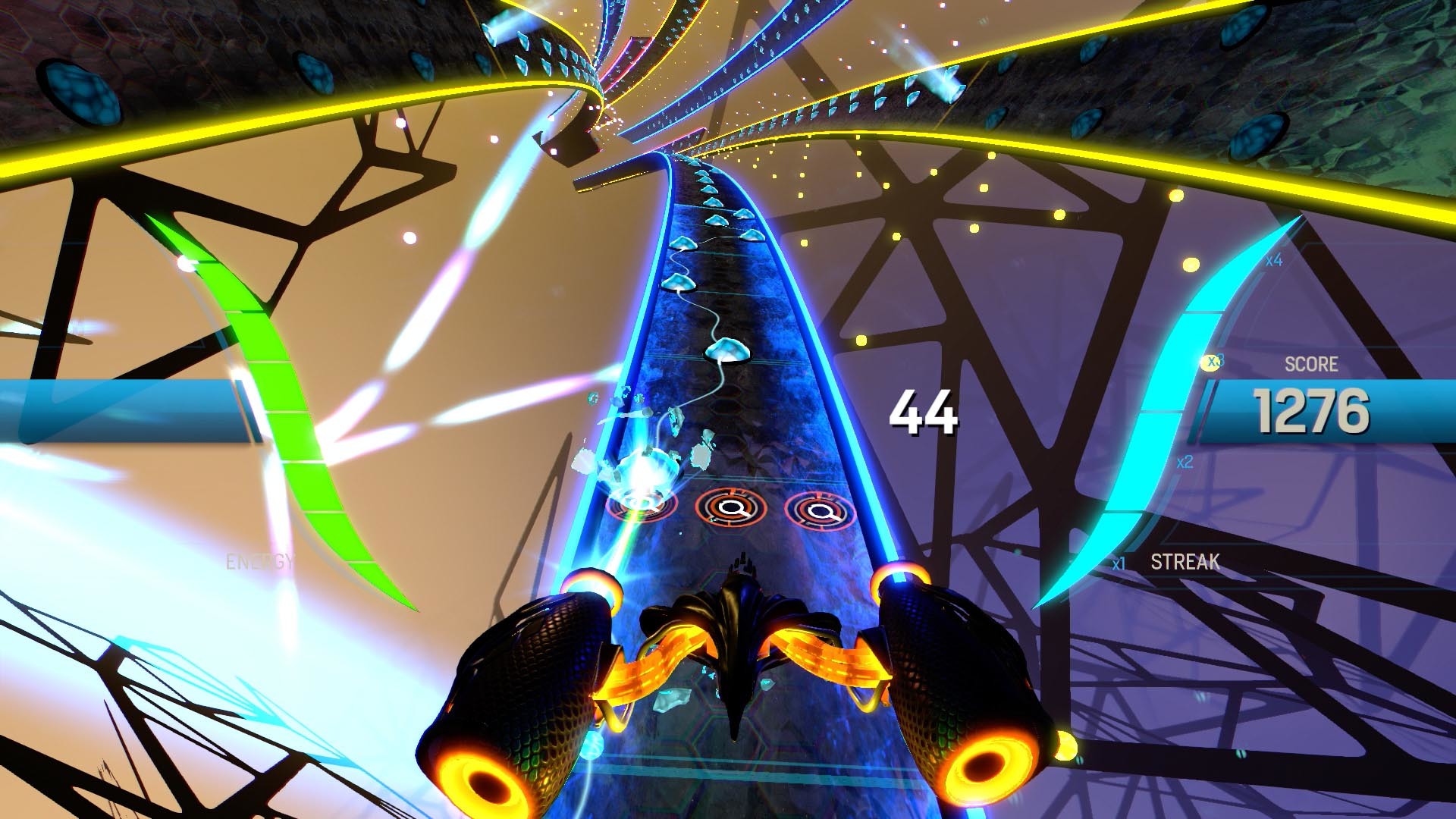 The single player campaign in undoubtedly a welcome addition but Amplitude is still at its best when played with friends for some local co-op and competitive play. The options here, while again relatively limited, deliver a huge amount of fun with the ability to play 3-on-1 battles brilliantly mitigating the issue of different individual skill levels while the ability to block your opponent’s tracks never gets boring. Like any of game of its ilk, it’s best experienced with the full quota of four players, but even with two, Amplitude provides an experience on par with the likes of Rock Band and Guitar Hero without the need for an array of sizeable and expensive peripherals.

It could arguably do with a bit more content and it could certainly do with a handful of licensed tracks, but the songs here are universally solid and the core gameplay remains as impressive and addictive as ever. It doesn’t add anything new of note (no pun intended) to the Amplitude experience, but it does prove that the underlying quality of the original is undiminished over a decade after its original release. The improved visuals are a major plus, the single player campaign adds some much-needed structure and multiplayer is better than ever – it’s still Amplitude as you remember it of course, but even Amplitude with a new coat of paint is better than the majority of music games on the market.