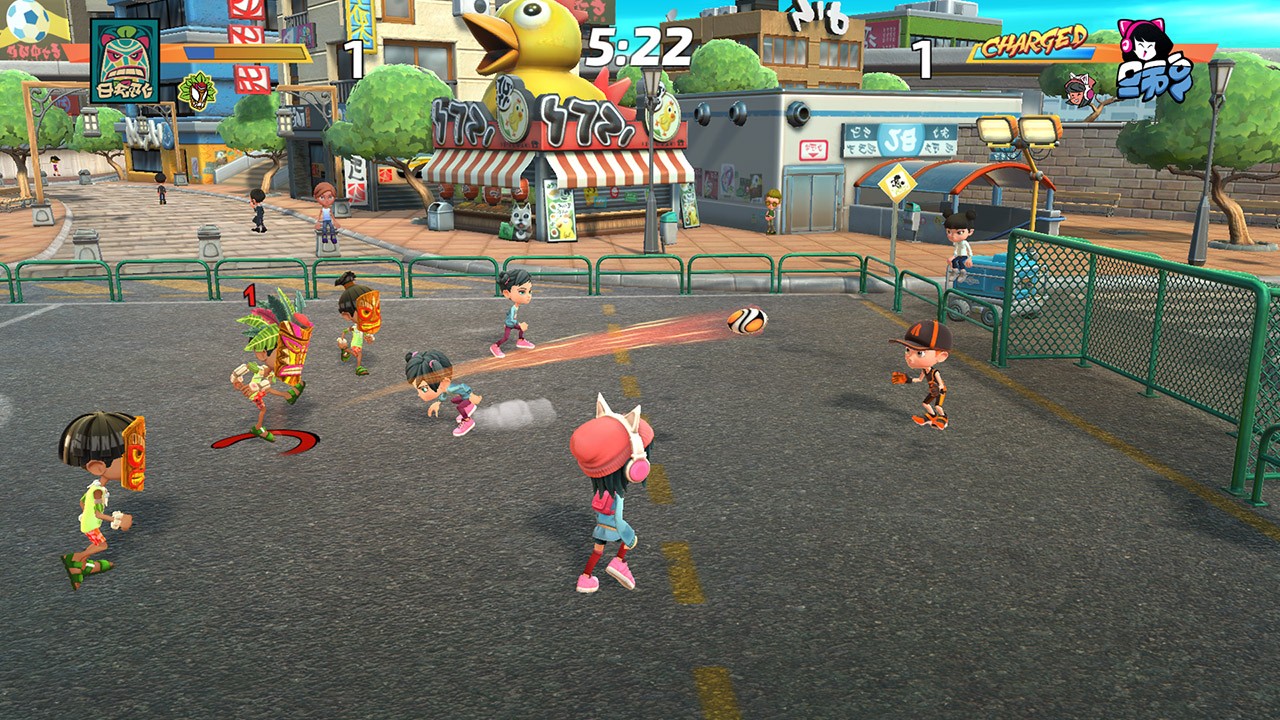 There is a small, but faithful corner of the internet dedicated to arcade football games that aren’t focused on real world licences. Whilst the majority of the football community wonder if their latest iteration will actually progress from a simple roster update, this group of players simply asks “will we ever get another “Mario Strikers: Charged?”

Along came XALOC studios, a Spanish developer, who boast a team well versed in movie/TV tie-ins, presenting their latest release on Nintendo Switch, “Super Kickers League.” Published by French company “Just for games”, Super Kickers sets out its stall from the beginning by making it clear there are no rules! (apart from the ones that are needed for football to work, such as how to win…)

The big question though is, can a studio from a continent famed for its football prowess, make a game that is a world cup winner? Or will it simply generate a lot of hype before crashing out in the quarter finals?

With it being a sport title of sorts, there is very little back story to go off, which is a shame really as even games like Street Fighter 2 still managed to make it clear there was some story. But you begin with a selection of Chibi-esque avatars who act as your team captain. Each having their own special move. You select the mode and competition you wish to play, be it single game, cup or league, kicker, team or retro and are thrust into a 3 on 3 game.

The pitches make up a variety of areas with “space age” force fields around the pitch to keep the ball in, while also allowing players to see the environments in which they are playing. If the ball is kicked too hard and tries to exit the game, it bounces back into the play, creating another element to players and one familiar to fans of indoor football games. 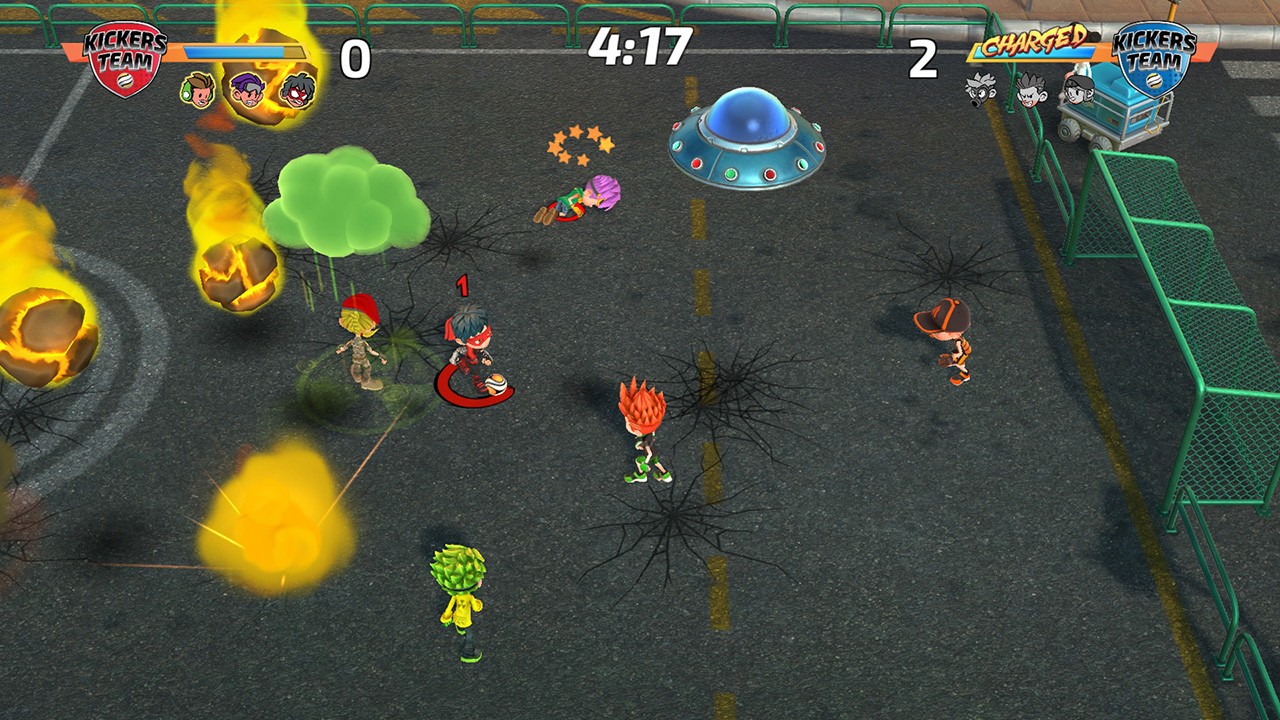 The gameplay is very similar to other games in the genre. Movement with the analogue stick, pass with one button, shoot with another. Holding the shoot button “charges” the power of your shot and there are ways to avoid being tackled, there is also the ability to run faster with the shoulder buttons and play a long pass. While defending an attack, you have the option to slide tackle or to charge into your opponent which briefly knocks them out. All of this plays into the basic rules of the game, score more goals than your opponent.

To help you in your efforts, your team captain bestows upon your team a special move. These have themes set around that teams captain and in theory don’t come across ass too annoying or game breaking as the majority of abilities affect one other player, such as them being picked up by a UFO only to be dropped back moments later. You’d be forgiven for thinking this a balanced system until you play as one of the characters whose ability causes the total immobilisation of the opposing team. The goalkeeper is auto controlled and has the ability to patrol outside the area, retrieving the ball whenever possible and often taking out an outfield player in the process.

The game supports couch co-op up to 6 players, each person playing one of the three forwards on each side, co-op follows the exact same game formula, with no special gaming options for multiplayer. Playing in a cup pits you against teams each captained by one of your fellow Kickers, each with a duo of generic, but themed, characters in support. Successfully defeating these puts you into a cup final against a team composing of the three captains of the teams you had previously defeated (why they get a second chance at glory is beyond me?) League mode is fairly self-explanatory, but is also an unlockable feature, once you have completed and won all the cups. Which brings us to our first issue. With only one true game mode, single game being considered just par for the course, this feels quite light on the ground. Having to complete each cup in turn gives players little options when it comes to game play. The number of captains is also limited at the start which means that the emphasis is on replay, which would be fine, if there was enough there to draw you into the game.

In terms of audio, it is clear which game XALOC have drawn inspiration from, as it is directly reminiscent of “charged”, there are also tracks for each themed area but these quickly become irritating during the game, and forgettable afterwards. Graphically, the chibi style feels quite cliché in the current market. The sidekicks are very generic and the captains themselves have little character besides those attached to their themes. The backgrounds and environments have had a lot of care taken to them and it’s clear the developers have worked hard in this area with some well thought out and designed areas. 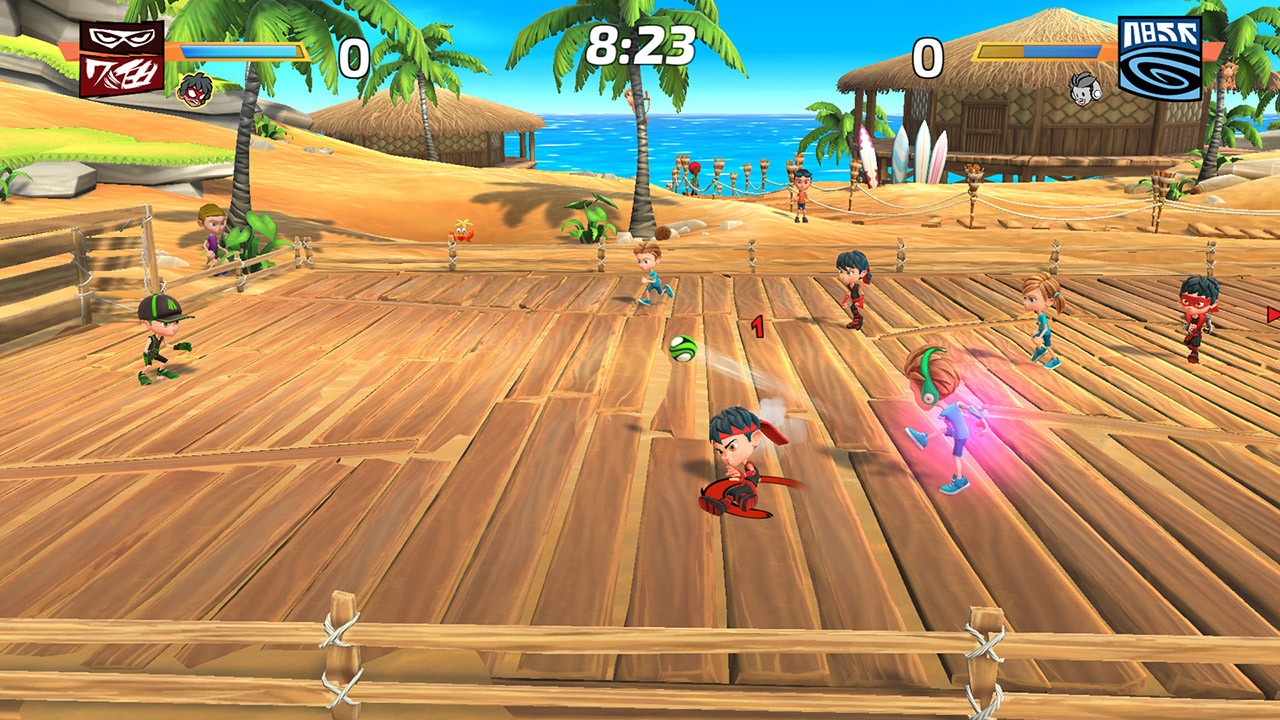 The main issues fall in that the game falls quite short of what it wants to be. The flow of the game is often sluggish, even when using the sprint function (in fact, I rarely took my finger off the shoulder button). The difficulty shifts from painfully easy to just plain painful, and not just when choosing a difficulty! I quickly found that mid match you can be a couple of goals ahead only to have the opponent score goals that would make David Beckham look like he was a fringe player for the Aigburth arms Sunday league team. Putting the game into easy mode will result in you thinking you have bought a rugby game with the scorelines you achieve, but playing on normal places you to accept that you may have to repeat cups because you lose in golden goal time.

Which brings me to my next point, the game uses an overtime feature when it feels like it (there is no mention of when or why, sometimes it happened and sometimes the game just ended). This feature can’t be “injury time” as there are no injuries to take into account, nor can it be extra time as often you find yourself a goal ahead, only to have the opponents equalise in overtime and then win the game in golden goal, the second added time feature that is implemented if you ARE drawing a cup game by the time the clock runs out, one goal wins all, which is a frustrating way of ending games.

The game did also suffer from a few glitches whilst I was playing, a couple of times the game had frozen mid match on the centre spot after scoring a goal (from either side). This is only resolved by starting the game again, losing your current progress as there is no save feature used within the cup matches, its an all or nothing slog through those cups.

Overall I was disappointed. I was a big fan of “charged” and when I saw this on the horizon I had hoped to regale some of that fun on the switch. But this just misses the goal. The sluggish game play is more noticeable here because of the lack of features to distract you, the characters don’t have the nostalgia factor or backgrounds to make you forget their generic role and their moves are cookie cuttered into every team, so there’s a lot less variety than before. The game also has no great leveller, a way to pull ahead and win a game with ease, nor a quick way to level a losing streak and feel like you can come back from the jaws of death. Whilst I played to unlock the content, I certainly felt that it might as well have all been unlocked from the start as I didn’t feel I was gaining anything other than cosmetics from it. The lack of online multiplayer also means that there is less reason to want to return to this once you’ve put the hours in to unlock everything. Researching a little around the game has also shown that some wave 1 DLC is on the way, but this appears to just be more of the same chibi characters themed around generic stereotypes (Goths and Vampires) and a similarly stereotypical environment (Haunted house).

Overall, unless you really really can’t scratch your Mario Strikers itch by playing the original games, then maybe consider parting with your cash, though definitely wait until the price has dropped. If you are wanting a couch co-op game to play with friends, you have much better and more enjoyable options, even in the same price bracket.

Super Kickers League is an arcade football game that tries to clone games that have come before it. Using similar mechanics and styles particularly from the Mario Strikers franchise to try and capitalise on the nostalgia and love of that particular game, and other mascot sports games like it. However, it scores an own goal in not making up for it’s short comings, with a roster of generic stereotypical themes and sluggish controls combined with changing levels of difficulty, it creates an experience players would rather forget, rather than one they will return to often.