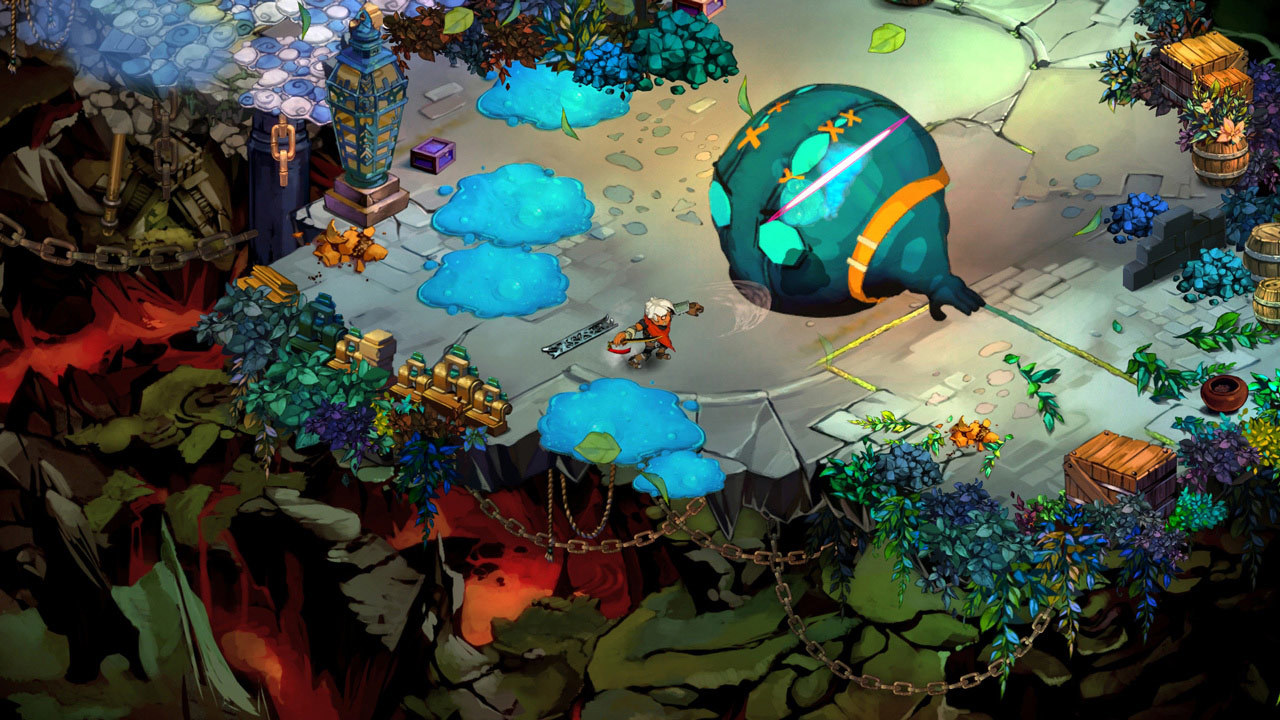 Usually in a role-playing game you either get to pick your character’s name or they’ll have a cool name like Cloud Strife or something. In Bastion you don’t get the choice, you are simply referred to as ‘The Kid’. Whether you’re going to warm to that, that’s up to you but you’ll definitely warm to what Bastion has on offer. So get your best RPG skills out and be prepared to grind to a better life!

You have the task of constructing a safe haven in the wake of Calamity, a cataclysmic event that broke up the world into a series of shattered islands. The Kid travels through what remains of the world, as you travel the world builds up around you. You get to Bastion and meet a survivor by the name of Rucks (who also happens to be narrating your adventure). Rucks give you the task of rebuilding the world, to do this you must traverse to the broken bits of the continent and uncover cores that will allow you to rebuild Bastion and bring it back to its former glories.

When you reach one of the shattered islands (when an island is completed more islands are unlocked) you will need to battle past various enemies which are reasonable detailed and quite varied in their look. You have two slots to hold weapons which are fully customisable as you progress through Bastion. There’s also a special move you can use when required which can range from calling on allies to help you in your travels to a spinning attack. 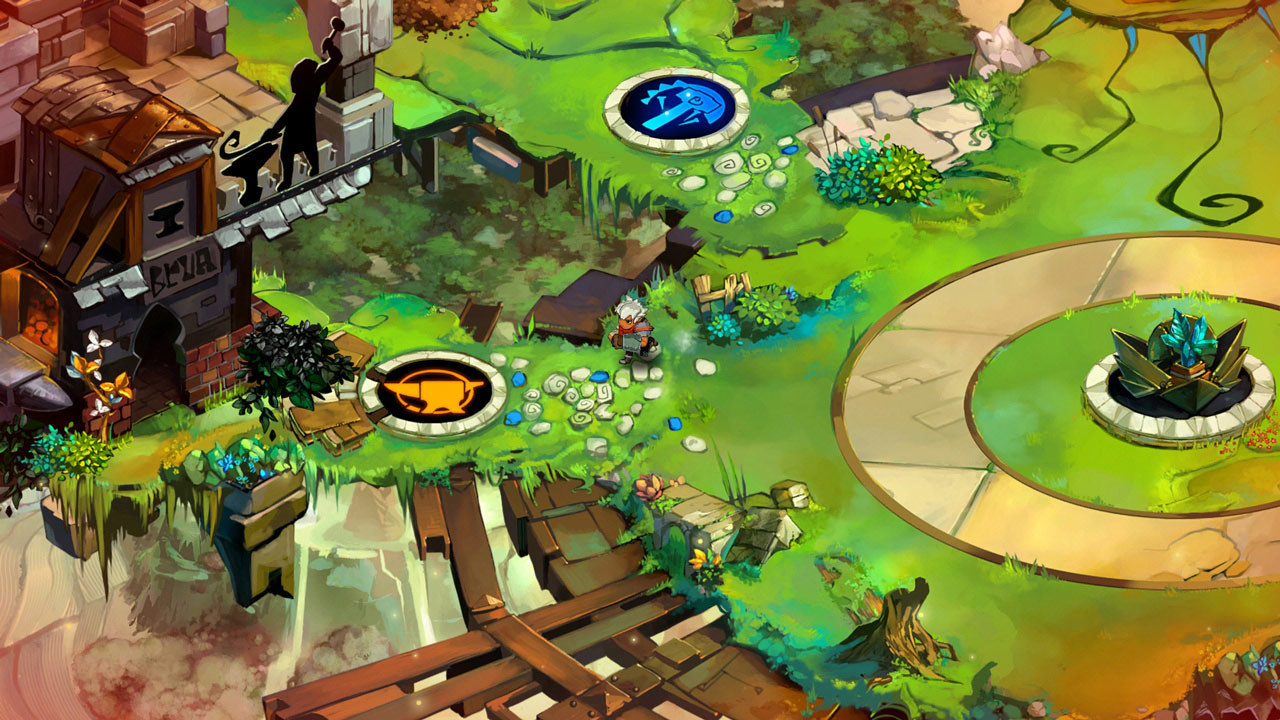 At the beginning of Bastion it’s quite entertaining discovering the new weapons that you can use but they do become more limiting as you choose a favourite and stick with until the end. The combat itself is essentially button bashing depending on the weapon that you choose, you can defend yourself with a shield but you won’t be doing too much of that. The fighting and navigating around the Bastion world is intuitive and works well, rarely will you become stuck in a situation and it’s quite fun seeing your allies battling the enemy as you run around and help out. There’s a lot of scenery that can be destroyed, though be careful you don’t want to knock down the walls around the space your running through because you will fall off if there are no walls to stop you. The only issue with one of the special moves is the one where you call on some allies to help you, they don’t follow you, they tend to stay in the area they were summoned which is quite annoying if a huge enemy presence is up ahead, you can try to draw the enemy towards you but you shouldn’t need to.

As you progress through each island you’ll be able to build a forge, distillery and artillery on your safe haven. These buildings allow you to upgrade various weapons and add bonuses that include allowing you to carry more health potions or increase the chance of a critical hit. These RPG elements help add a few extra elements to Bastion plus you can also gain experience and level up. Bastion does feel more like a dungeon crawler as you travel to various lands, gain experience by defeating the enemy and ‘completing’ the task at hand.

The landscapes are beautifully drawn and are quite bold and bright. As mentioned earlier the enemies are quite varied and fit within the world of Bastion. Each final blow delivered to the enemy feels satisfying and encourages you to fight all the enemies on-screen. Bastion possesses some of the finest narration you would have come across, the delivery of the story and general plot is excellent throughout, it really sets the scene and you feel part of the story. The soundtrack is quite endearing helping you to fully engage with Bastion, each song is upbeat but also tinged with a bit of sadness/despair which suits the broken up world you are trying to bring back together. 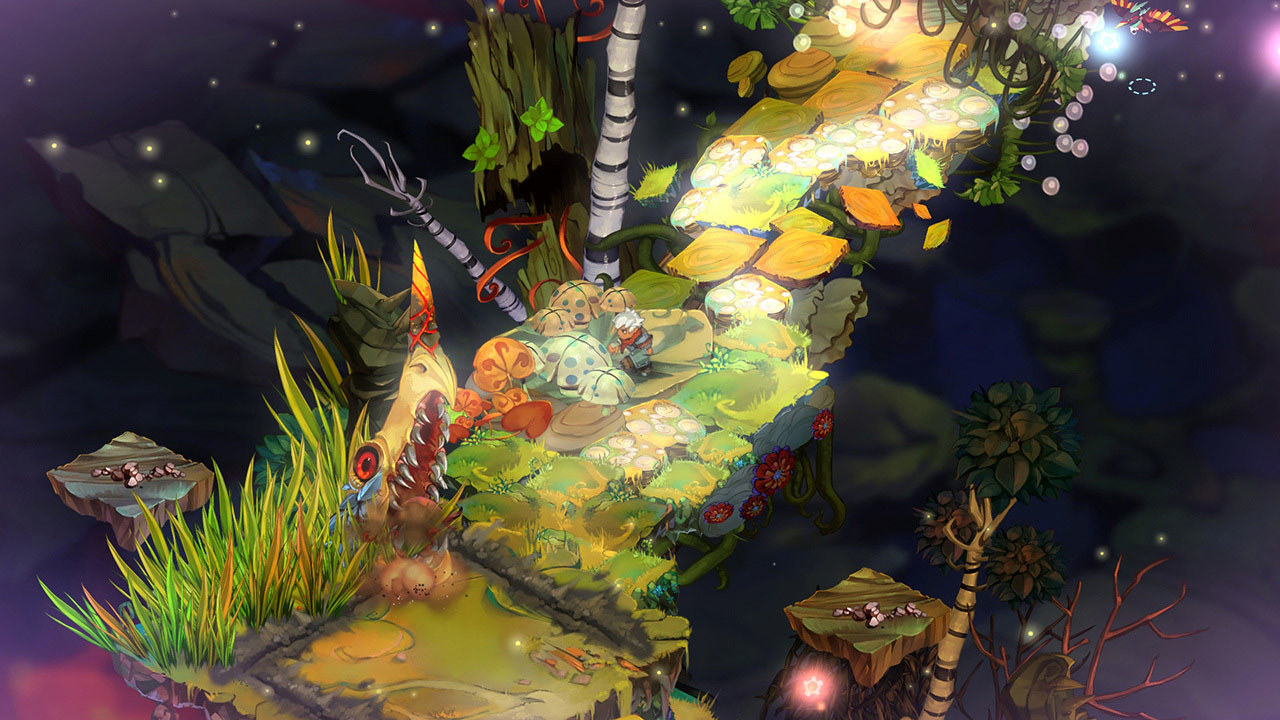 Bastion is very good role-playing game that has enough going for it to justify being re-released in 2015. If you haven’t played Bastion before it’s certainly worth a few hours of your time even if you are not a fan of the genre because it’s a very enjoyable romp within a world that is definitely worth progressing through.

Bastion is very good role-playing game that has enough going for it to justify being re-released. If you haven’t played Bastion before it’s certainly worth a few hours of your time.