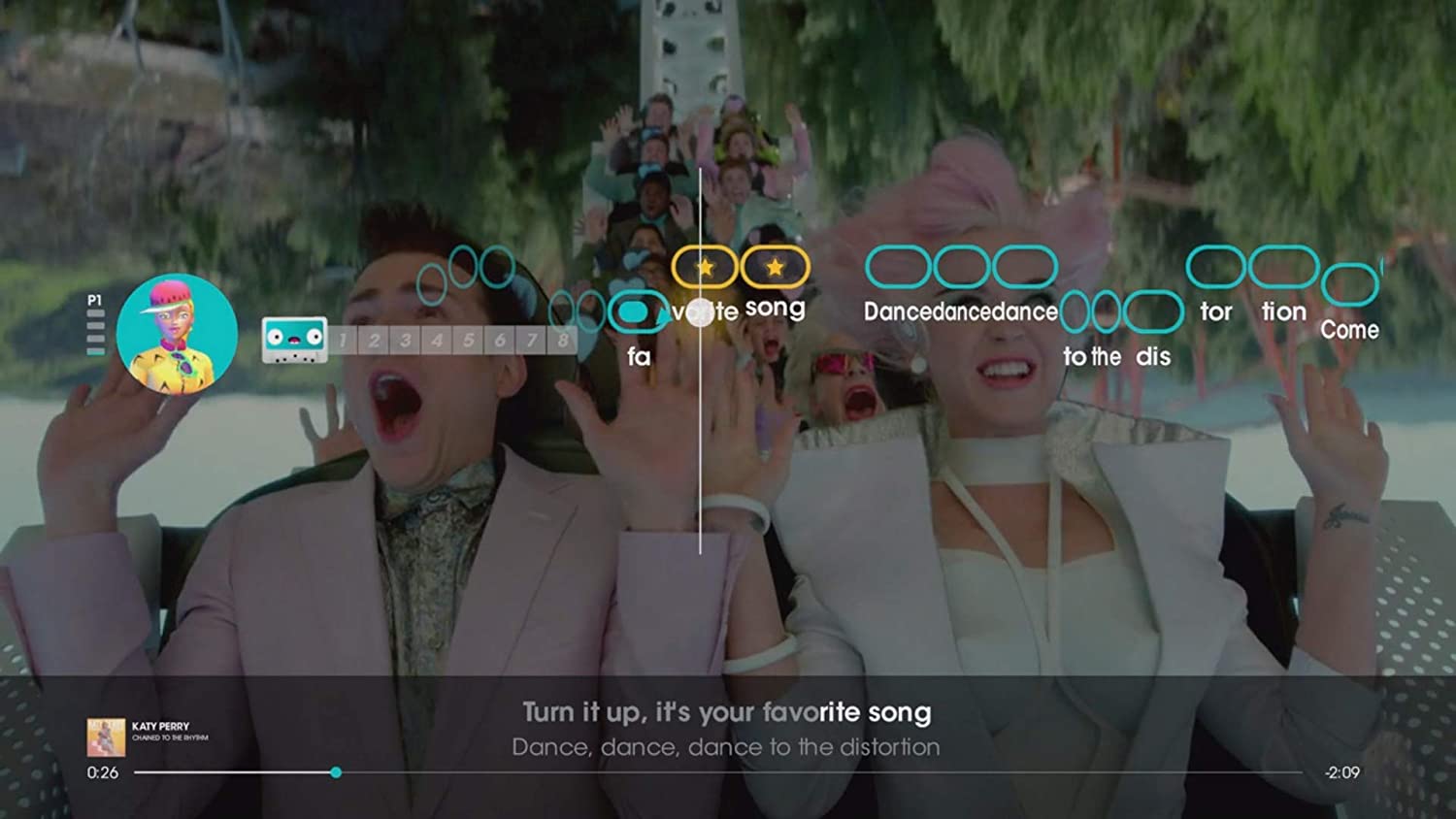 People love to poke fun at franchise games, particularly when it comes to the sports variations. There was just a famously harsh review of FIFA 2021 due to the blatant copy/paste of the previous year’s title, and I think the review, though justified, brought some harsh, blanket criticism to annual/semi-annual games. After all, they exist in regular rotation because they are popular, and they do sell. For some, there’s simply not a lot to add year after year in order to make a “new” game (though there needs to at least be an attempt). With musical games, though, you can’t just bring out the same songs from the previous year (though one sort of wishes there was a better way to do just that). Voxel Court has been making a slow but strong play for the regular instalment approach to their singing game, Let’s Sing, and, I’m pleasantly surprised to announce, this one might be the best yet.

Not in terms of musical catalogue. Let’s be clear, there are some bangers for Let’s Sing 2021, but it’s not my favourite lineup of all time, though that’s due to my musical tastes. Having said that, Let’s Sing 2021 makes a real play to get someone from every walk of life on board, and I have to applaud that. You’ve got some newish tracks from Lizzo, Justin Bieber and Sam Smith, but not the newest from anyone (players looking to break hearts with Lonely need to wait a bit longer). You have some good, relatively recent tracks, though I think me suggesting that the Lumineers’ Ho Hey shows how old I am. Still, High Hopes from Panic at the Disco and Thank U, Next from Ariana Grande aren’t the shiniest singles but still a blast to sing. Then we dip into the more old and frankly eclectic section which really got my attention. Linkin Park from the Meteora days (Somewhere I Belong). Seal from the Batman Forever days (Kiss from a Rose). Genesis from still being Genesis days (I Can’t Dance). Even I Just Can’t Wait to be King from The Lion King was a massive singalong surprise. However, the good tracks are balanced out by very middling, sometimes invisible tracks that I had never heard before and, after consulting with others, they had never heard before (Lean On is a specific culprit). Still, that’s what DLC is for, and that’s the great part with musical games: a wider selection doesn’t mean wasted space, it just means more choices. 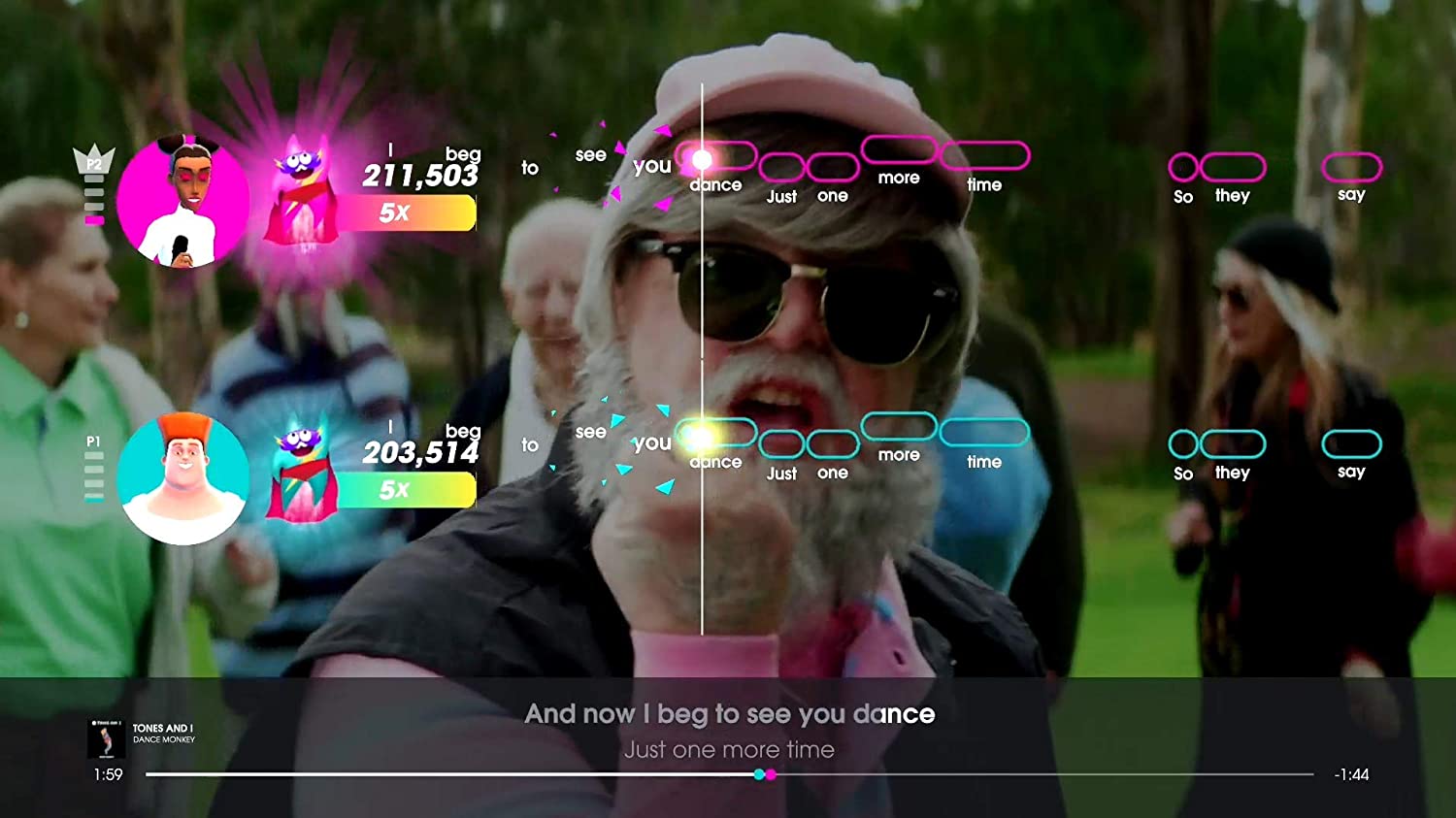 The standard game modes are back, for those who enjoy the Let’s Sing overall experience. You’ve got classic mode, where you grind up songs to unlock them for Jukebox mode and also gain experience for different avatar outfits and such. The Jukebox lets you watch the music videos and sing along without any challenge to be had because it’s just for fun. Duet mode lets you rope in a friend or loved one to join you on doing Jonas Brothers tracks together, because why the hell not. Party Mode is the team-based games that we’ve all come to know and love where you apparently need to throw down with guests to see who’s best at singing, and they’ve added one new game: Pop Chicken. Pop Chicken is a decent approach to a sort of reverse tug-of-war where you can move the egg towards the opponent by singing correctly, and activating powerup notes that obscure the pitch, cause words to go up in value or, to your favour, make your notes more powerful. It’s a fun little addition that adds a bit of razzmatazz to the game, but I think it’s one of the few that really, really encourages you to push your opponent mid-song. I’m serious, all it takes is a light shove to throw them off and you to win, and this is why I shouldn’t play with other people.

The standard game modes now have better song and accuracy detection, which I really appreciate out of Let’s Sing 2021. One of my biggest complaints is that so many people are able to “cheese” their way through songs by just making sounds that are sort of like words to hit the appropriate note range, and that bothers me more than it should. Now, through the power of science or better guessing, Let’s Sing 2021 is keenly aware when the guttural humming noises that you try to pass off as lyrics are occurring and they will dock you accordingly. My six year old didn’t know the words to So Am I by Ava Max (frankly, neither did I) but was able to guess the general way the song sounded. She got a lot of points but not a lot of stars, with the game specifically calling her out on knowing the words for next time. Wow, Let’s Sing 2021, way to bring the Simon Cowell heat to my kindergartener. In all seriousness, this is a massive leap forward in the assessment of the songs, and it might make the online mode more worthwhile in competition, though I’m still fairly certain players will just keep cheating and holding their mics up to the different music videos and CDs they own in order to hold onto their global achievements. I’m not calling anyone out by name, but I’ve seen it happen and it makes me hesitant to even engage on the online circuit.

The new Legends mode is interesting, and was clearly created to help create replay value for solo singers. With Legends mode, you’re basically singing against a sort of Let’s Sing Boss to unlock a whole mess of special stuff. The leadup levels to the boss battles are odd, because you have to sing so many “star” notes in order to win and move forward. As soon as you hit the max number of notes, though, the song is over, full stop: it means you start somewhere in the middle of the song often and then are quickly cut off when the game deems you done. The boss makes you sing the full song in duet mode, and your stars are awarded based on the divide in your points, with you being further in the lead guaranteeing that coveted three-star get. Nothing’s wrong with any of this, but there are some strange choices that happen. For example, you can only Jukebox unlock the boss songs: the level songs, since they’re snippets, don’t count as full songs. Also, there are a whopping 192 stars to get, with about twelve per boss level. You can do the math if you want, but it adds up to a TON of singing, so players need to really consider if they’re gonna go all the way with this nonsense, because it is a LOT. 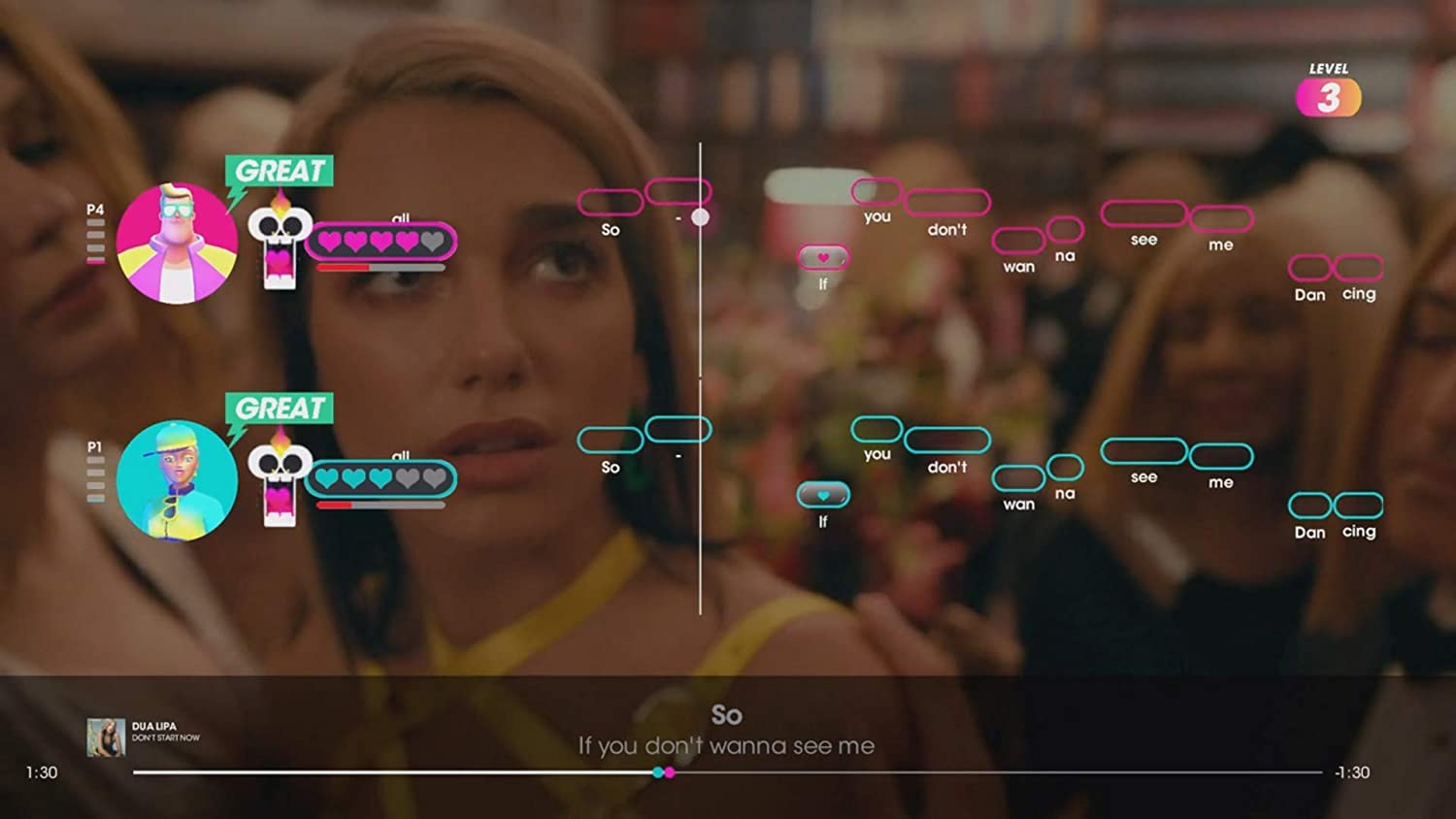 This is the spot where I normally rail against the smartphone app for Let’s Sing because it’s been a dumpster fire for the last two or three games. It hasn’t connected, it hasn’t worked a bit, and I’ve been sad. For whatever reason – and I’m definitely not complaining – I finally got it to work on Let’s Sing 2021, Switch edition, with my iPhone. If people need to hear this, my iPhone is currently on 14.2, nothing is jailbroken, and I also am not using a 12: I got an old XR, and yet here we are. It is SUCH a relief to use the smartphone for singing, particularly with a Switch Lite, because the dongle is an enormous pain in the ass. Also, I just feel better using the full wireless setup and not needing to drag out extra peripherals for gameplay. It made sense with Jackbox, I hope it’ll make sense with Let’s Dance 2021 (fingers crossed that the smartphone app works there) and more companies need to have the option for smartphones to be the extra controller when needed. Profit off DLC, not off unwieldy accessories that only have one specific use.

Let’s Sing 2021 is a great installment in the franchise and a seriously great step forward in performance and potential. The song list isn’t the best ever, but it’s got some good ones that I would want to come back to time and again. The algorithm is smartening up and making players sing for their supper instead of humming for their success. It runs fantastically, the smartphone app finally working is a positive choice, and the amount of replay value is significantly higher than any game since. We can’t go to karaoke places, and the Joysound subscription service isn’t available outside of Japan (well, not easily). This is a great compromise that will get you several nights of joy and delight, particularly if you or your children are in your teens and early 20s to capitalize on familiar and fun songs. Queen was great to help appeal to the current nostalgic trends, but 2021 shows the future of the franchise and that it could, sincerely, be heading towards a great, constant staple in the gaming atmosphere.

Easily the best Let’s Sing so far, a few more familiar songs would have catapulted this title from great to fantastic.