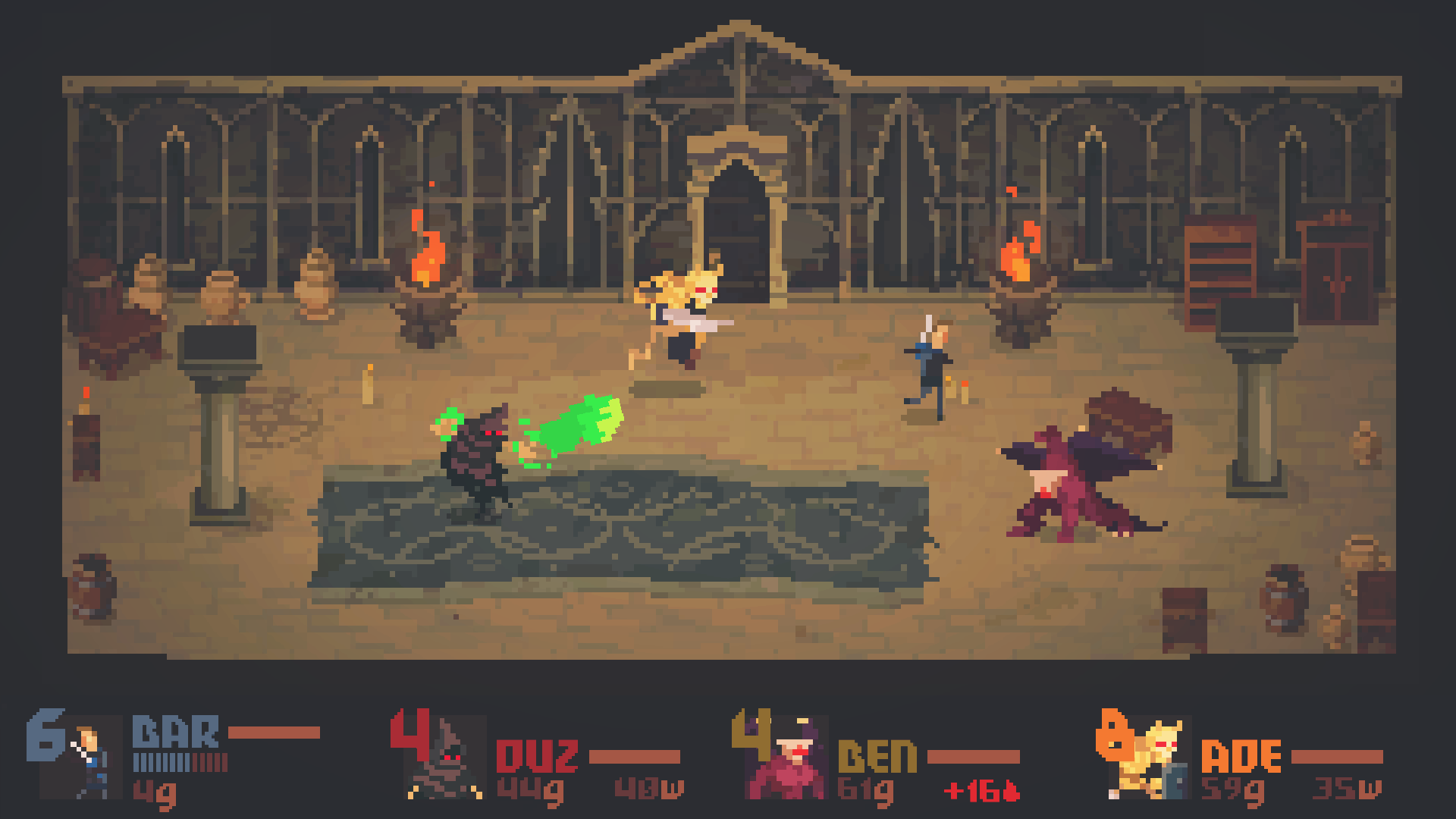 Crawl is a Local Co-Op, Pixelated “Dungeon Crawler,” as the name might suggest, from the talented minds at Powerhoof. It is a fast-paced, often chaotic experience, in which players battle each other as much as the monsters that lurk in the dungeon levels. It combines themes from bygone eras of earlier gaming franchises and ushers them into the modern PS4 platform with polish and style. With Action and RPG elements, Crawl is a refreshing break from other dungeon crawler-style adventures. But is it a worthy addition to a couch Co-Op library?

When I first loaded up Crawl with a couple of friends to check it out and see what all the fuss was about, I was surprised that the Local Co-Op elements blend cooperative and competitive themes together! In a nutshell, up to four players or a combination of one player and at least one A.I. opponent duke it out to be the last-man-standing. One player takes the role of the Hero, our pixelated protagonist on a quest to delve deeper and deeper into the bowels of this dungeon lair. Meanwhile, the other 2-4 players spawn in as ghosts, who use things like barrels and chairs to try to injure the Hero player to help him die. Yep, you fling objects at your friend, knocking him around and ticking away at the Hero’s health bar piece by piece. The other players spawn into monsters that can attack, from weird leeches to Minotaur-type demons, and team-up to kill whoever is currently the Last Man Standing. Then, the player that dealt the killing blow becomes the Hero, and the chaos repeats all over again as s/he attempts to defeat A.I. monsters, opening doors and descending further, even battling epic Boss creatures as his or her friends try to kill, maim, and hinder such progress. 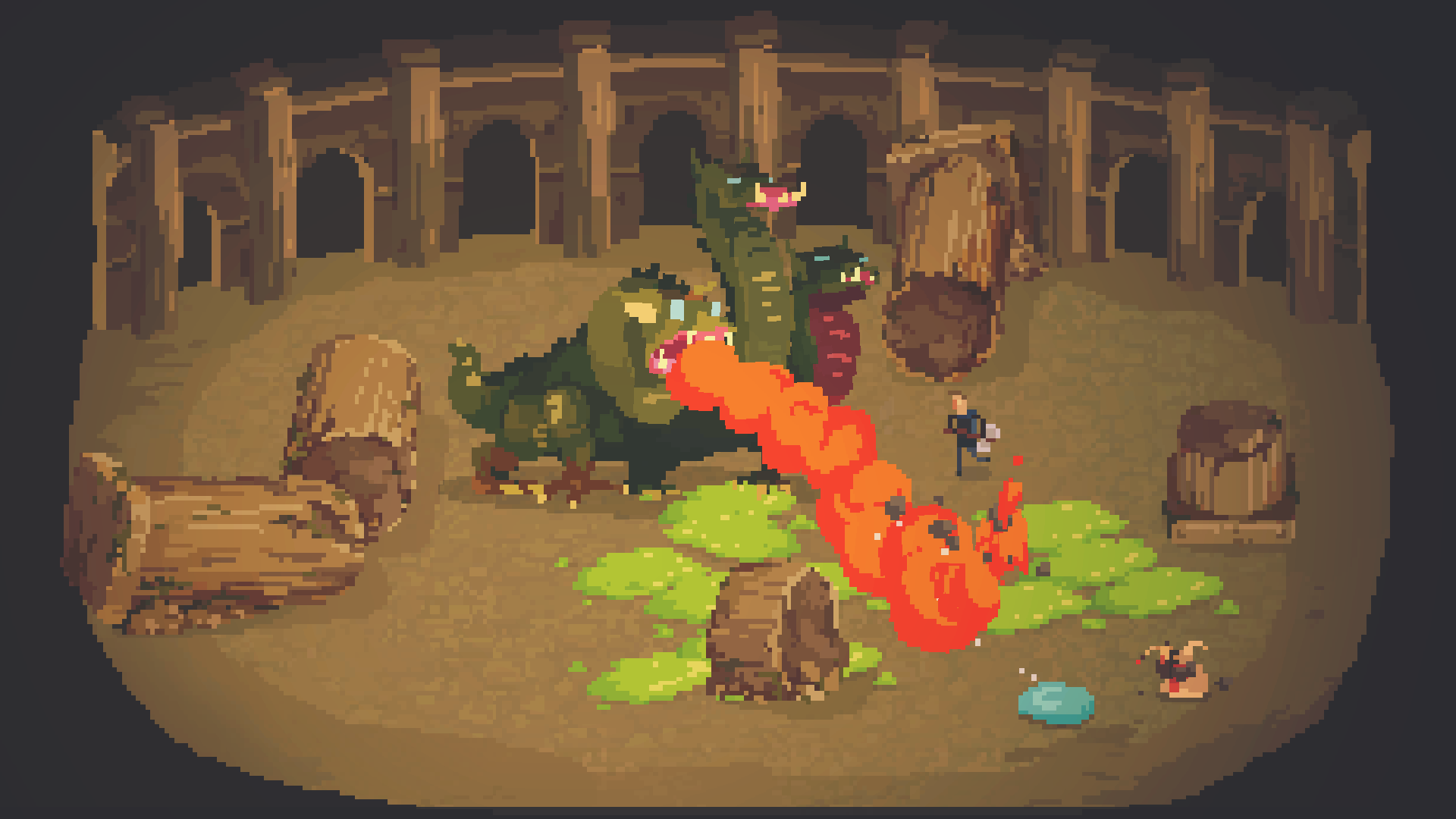 Its simplicity of mechanical design lends perfectly with the natural frenzy that comes from sitting in the same room as your friends, using the same PS4, together. The combination of cooperation and competitiveness is refreshing – the novelty doesn’t wear off fast. And although I tend to avoid games that encourage me to kill or backstab my friends, just for the sake of a pleasant evening, Crawl manages to facilitate this in a way that’s too much fun to lend to the relationship-ending degrees of Monopoly.

The player in the Hero role has occasional opportunities to visit a shop and upgrade his or her weapons, and over time, everyone generates XP from kills. At the end of each level, everyone has a chance to upgrade their creatures – yep, you get to do a small skill tree, choosing what forms you want each of your non-Hero-time to manifest as. Crawl boasts over 60 different monsters, not to mention a huge volume of spells, weapons, and items in the shop, so there’s something for everyone. Each game run takes about 30 minutes, but it’s exceedingly fast-paced, especially when you’re laughing with friends in the same space, fighting over kills, launching pixel barrels at each other on the screen. 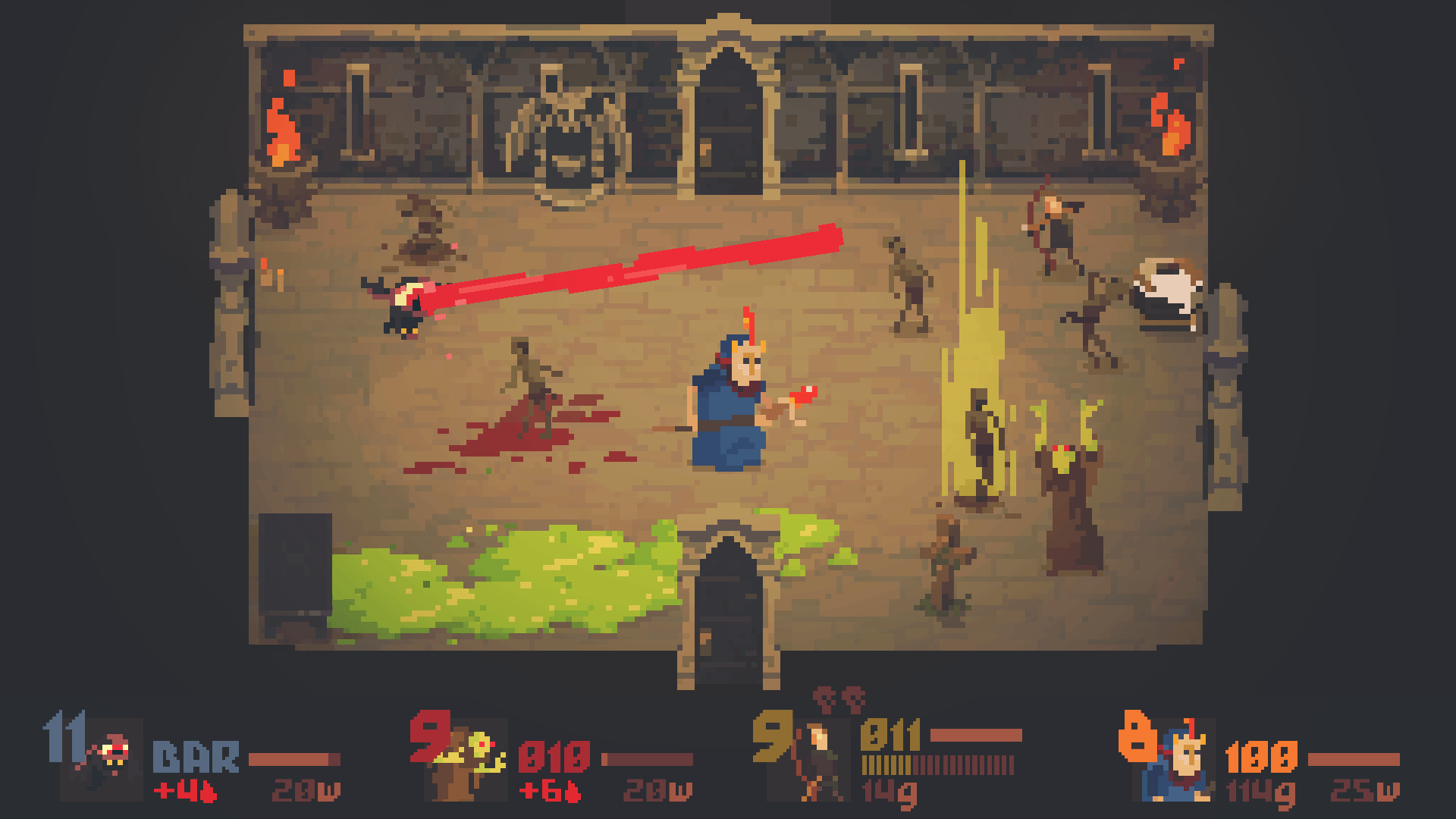 Crawl is simply a fantastic game, and it excels as a Local Co-Op option for players who like to team up with – and against – friends in real life. I was even able to access the Local Co-Op feature using the PS4’s Share Play feature, which allowed me to meet up with friends far away to give them a tour of this crazy dungeon brawler. The single player gameplay isn’t bad, either – I love that you can choose to have 1, 2, or 3 A.I. opponents. But it loses some of the magic when it doesn’t involve the senseless, brutal murder of the people you love, and I’ve rarely encountered titles that facilitate that better than Crawl does.

The soundtrack is dated and entirely appropriate for the pixel graphics that create the Crawl levels and characters, and I love how it’s designed to look intentionally dated and unstable. Once in a while the screen would look a little funky, or the audio track would garble, all in ways that are cleverly reminiscent of yesteryear gaming.

As much as I’d love to say that Local-only Co-Op isn’t a bit of a hindrance, I do wish that titles like Crawl would consider expanding into an online multiplayer option as well. Not everyone is fortunate enough to have friends that will come over for party games and virtual dungeon crawling, so I was very lucky to have a group willing to come over and check out this title with me. But I know that a lack of multiplayer options, especially in a title that is so incredibly fun as a Co-Op (and competitive) experience, can hold games such as this back concerning full reach and influence. Still, if that feature isn’t a must-have, I highly recommend it for anyone that loves Retro-licious action, mayhem, friend-murdering, and pixelated glory.