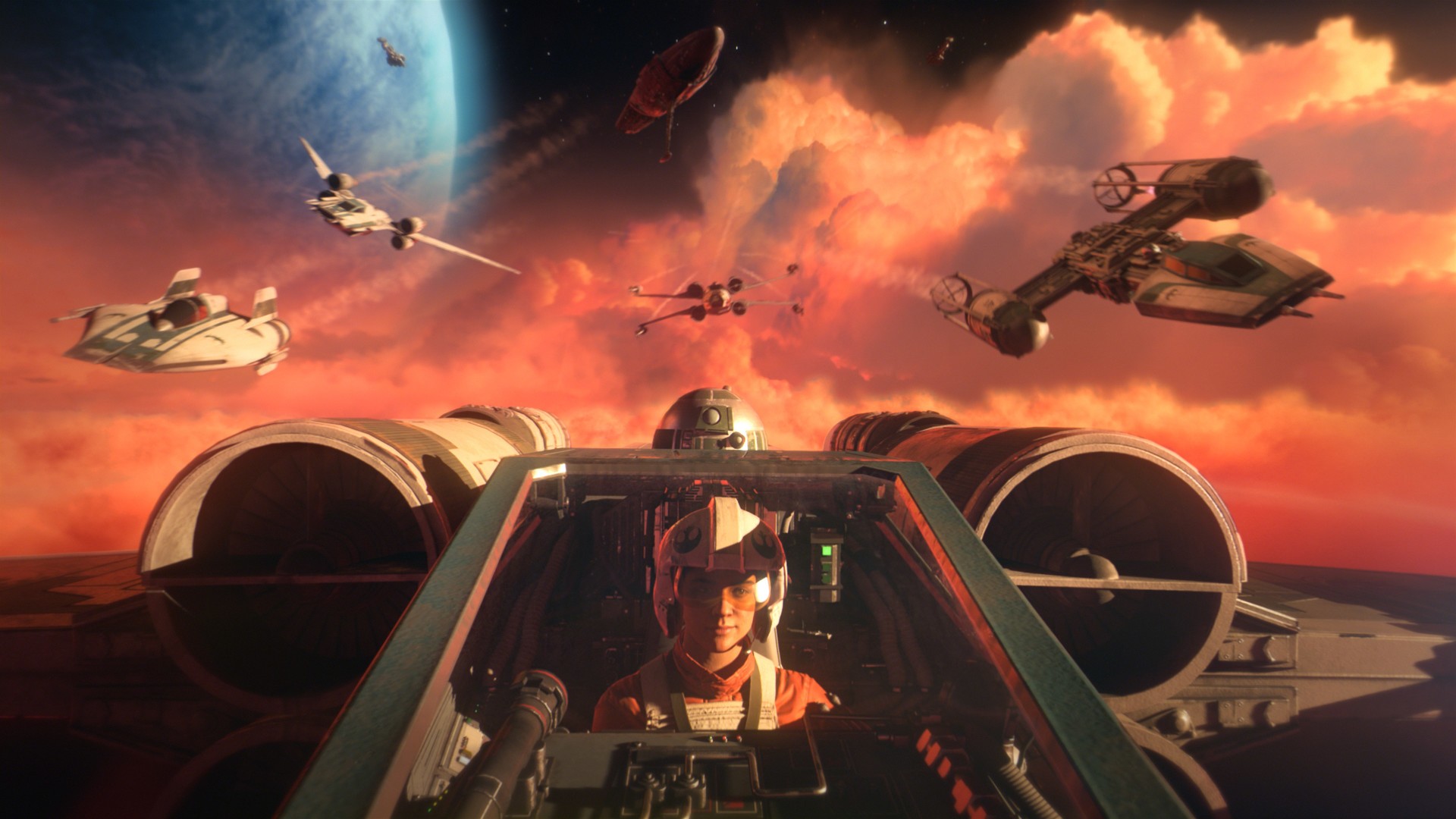 EA and the words Star Wars go together like a Board member and a homeless person they’ve just paid to beat up in the early hours of the morning. By now you should know who represents whom. Star Wars just keeps taking cash from EA while laying on the ground in submission. The infamous name of EA as a bloodsucking corporate entity will never fully leave our minds. What amazing times we live in where the public mindset of a company consists of “ahaha  gambling for children” and “did I just pay up to £40 to maybe get a sparkly gun?”

What makes Star Wars Squadrons different is that it’s not trying to employ kids into asking mummy or daddy to give up their debit card to buy the latest football pack or epic dancing emote. Before I get into the nitty-gritty, it must be noted that a game should not be praised for NOT including pay-to-win systems, addictive loot boxes, and in-game currencies that come in bundles costing £50. These are all practices of a new sort of gaming landscape and it should not be taken as the norm. Free to play games, have the benefit of the doubt when it comes to these practices, but no consumer should be expected to pay the equivalent of a full-price game on top of a game they’ve already bought in order to look good, play good, or simply feel good.

I titled this word document as Pew Pew Pew because that’s how I feel about all Star Wars products;  laser warfare with flashing lights and hypnotic noises flying all around you as try to save the galaxy from terrorists dressed in grey suits and capes. It’s safe to say Star Wars Squadrons recreate that feeling. You’re dropped into the campaign playing as the Empire shooting your way through a trading port laying fire to smugglers and rebels alike all in a blaze of reds, oranges, and greens. You get a sense of the grandeur and scale of the game as looming planets and cosmic dust dominate the background in glamorous colours. And that’s something that EA has managed to get right for a while now. Their Star Wars games look stunning. There isn’t a single map that doesn’t look like a screensaver that some streamer with LED lights across their room and a multi 4K monitor setup would have. 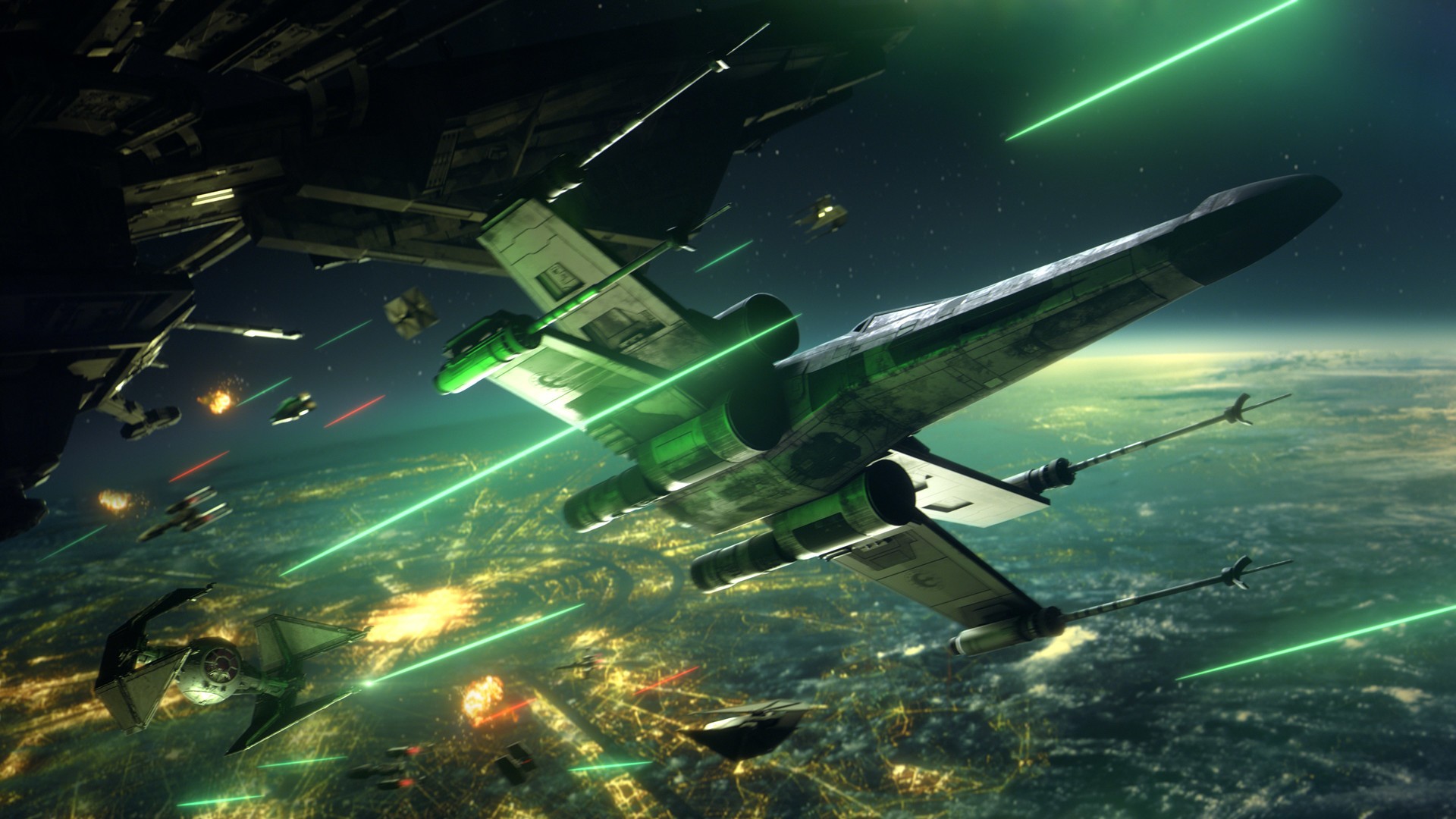 And did I mention it’s designed for VR? I currently don’t own any such kit, but if I did then I’d jump straight into star wars squadrons first. The game is oriented around the perspective of your cockpit and the idea of looking over to your left shoulder, below or above as you dart in and out of players trying to shake them off your tail gives me such a hypothetical rush. Combined with rich environments that scream graphics, graphics, graphics, you’re either going to be feeling adrenaline-filled or vomiting on your carpet after 10 minutes of playing.

It’d make a bloody good painting if It wasn’t a video game. But it is a game, and games come with gameplay. Star Wars Squadrons is a mixture of highs and lows. As mentioned earlier you’re piloting Starfighters on either side of the space war from the perspective of your cockpit. Its first-person dogfighting action. This would be more fun if your TIE Fighter maybe had bigger windows installed? The frames holding your windows, blast glass, whatever they call it, can take up a lot of screen so that visibility is less than desirable. They negate this with the use of a hybrid mini-map that you can use to line up with enemies or teammates, but I found myself rarely looking at this because there is SO much more keeping my eyes occupied.

You’re given three different gauges as the Rebels, speed, weapons, and shield and as the Imperials you’re given just the two, speed and weapons. To play the game you have to learn how to divert power from each gauge and do so depending on your situation. If you’re wanting to outrun your opponent? Send all power to Speed and focus on tight turns. About to lay into an enemy? Divert to weapons to shoot for longer. On top of this, both Imperials and Rebels have their own unique secondary power systems that either focus on defence as the rebels or offence as the Imperials. All of it can be incredibly overwhelming and difficult to manage when dogfighting especially when the secondary power systems take up controls that are needed to steer which in tight situations can leave you for dead. While it can be picked up after playing a few sessions, to truly master these mechanics require a highly tuned player.

This is most felt in the multiplayer. It can either feel like taking candy from a baby or being robbed blind in your own home while the robbers scream “GG get good lol” as they steal the family possessions. Star Wars Squadrons has an incredibly steep difficulty curve that appears to have no end so far. One game you may dominate a whole team with ease and marvel and as enemies set themselves up for death every bombing run they attempt. Others you’ll find yourself getting killed seemingly at all angles at once, every run, every phase, every second of the game. While I love the multiplayer game modes where you take turns attacking and defending capital ships and their smaller counterparts, it can sometimes be incredibly frustrating knowing you’re about to be smothered by the enemy team. 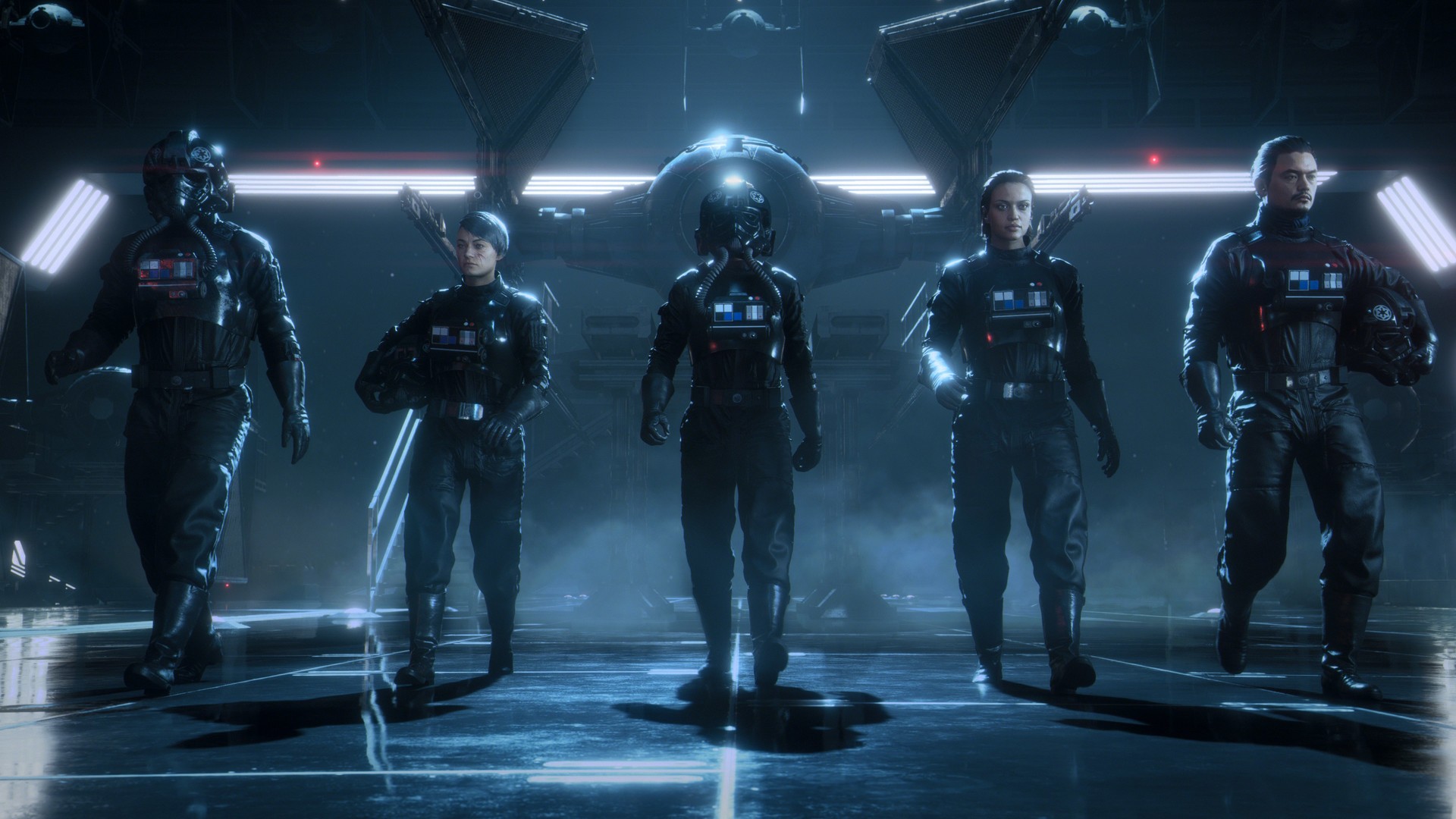 To be good at this game you need to have a squad of decent pilots who understand how to use the power systems, those pilots must communicate, and you must all understand and know dogfight strategies, so I’m fucked? I can see the pros of dogfighting games loving this Star Wars experience, but for novices to the genre, you may only get a weeks worth of fun before you’re left in the dust.

The game is also lacking in content. It’s a bit of a downgrade when all previous Star Wars Battlefront games bring more to their Starfighter assault modes when compared to Star Wars Squadrons. I’m sure more content will be drip-fed over the course of the year, but I believe that a full game should be released as a full game and not sold with the promise that the rest of it will appear later.

So for the die-hard Top Gun fans and Ace Combat players who dream of eating, living, and dying in the cockpit, this game is definitely for you. With skilled gameplay mechanics and a story that delivers action-packed missions, but coined with content that will get old quick until the next seasonal update it brings this bad boy to a 9/10.

So for the nervous wrecks who start to sweat on their Jet2 flight to Spain and have only played Battlefield’s aeroplane mode once or twice? This game is simply a maybe. With complex mechanics leaving room for skilled players to excel, and emphasis on ranked and high effort matches, it may leave casual players frustrated and stuck on where to go after a week of playing. As it is maybe a 5/10, if you put on a VR headset its a 6/10.

A flying game that offers veteran gamers the opportunity to excel. For the standard gamer, you may find it frustrating with little progress.