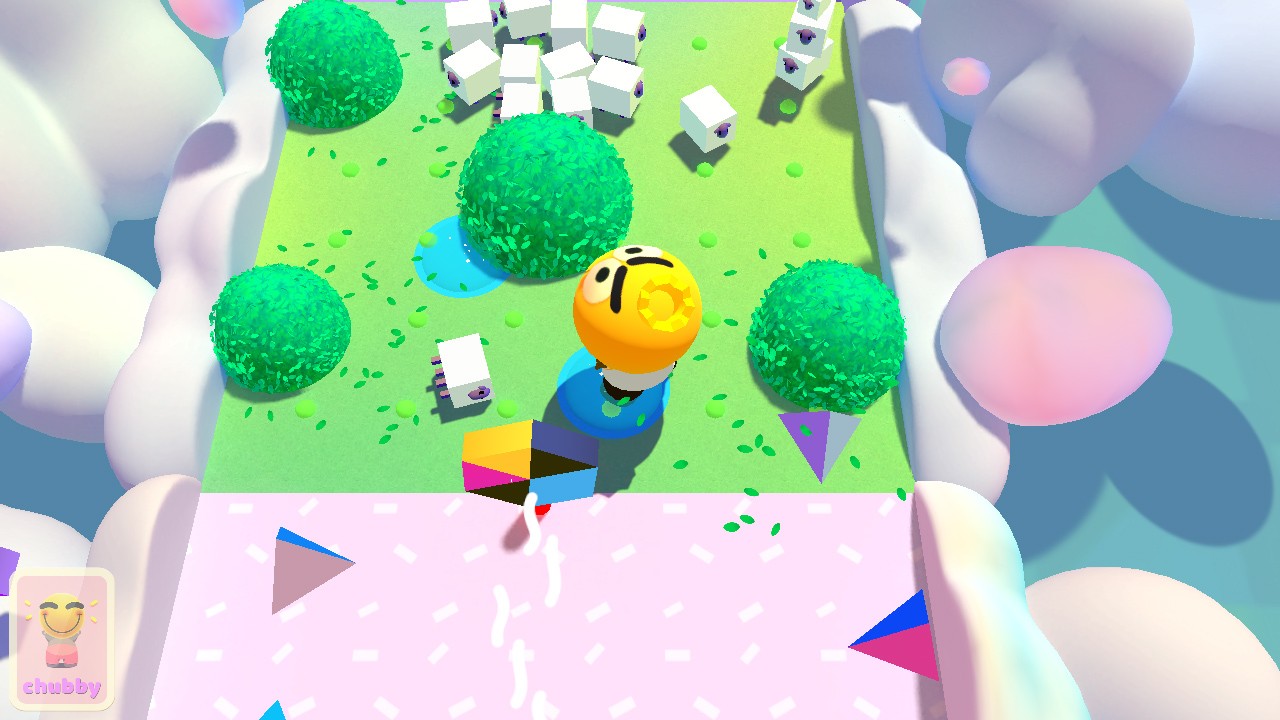 Traditionally, couch co-op games like to focus on ease of movement to appeal to younger players. Clumsy Rush ignores this and uses it’s purposefully frustrating movement mechanics to create a unique gameplay experience that is unfortunately dampened by inconsistent controls and repetitive levels.

The aim of Clumsy Rush is to get the crown and reach the goal before your opponent can steal it off you. Sounds simple, right? Well, the caveat is you are controlling a bipedal hippopotamus seemingly taking its first steps, and so traversing the obstacle-filled field makes for a difficult task.

There are a variety of different hippos to choose from, all with unique and detailed costumes. Clumsy Rush doesn’t take the rather lazy route of marketing alternate colours as ‘skins’, but instead creates humorous costumes each with their own personalities, including a ‘Donald’ hippo with a striking resemblance to a certain world leader. 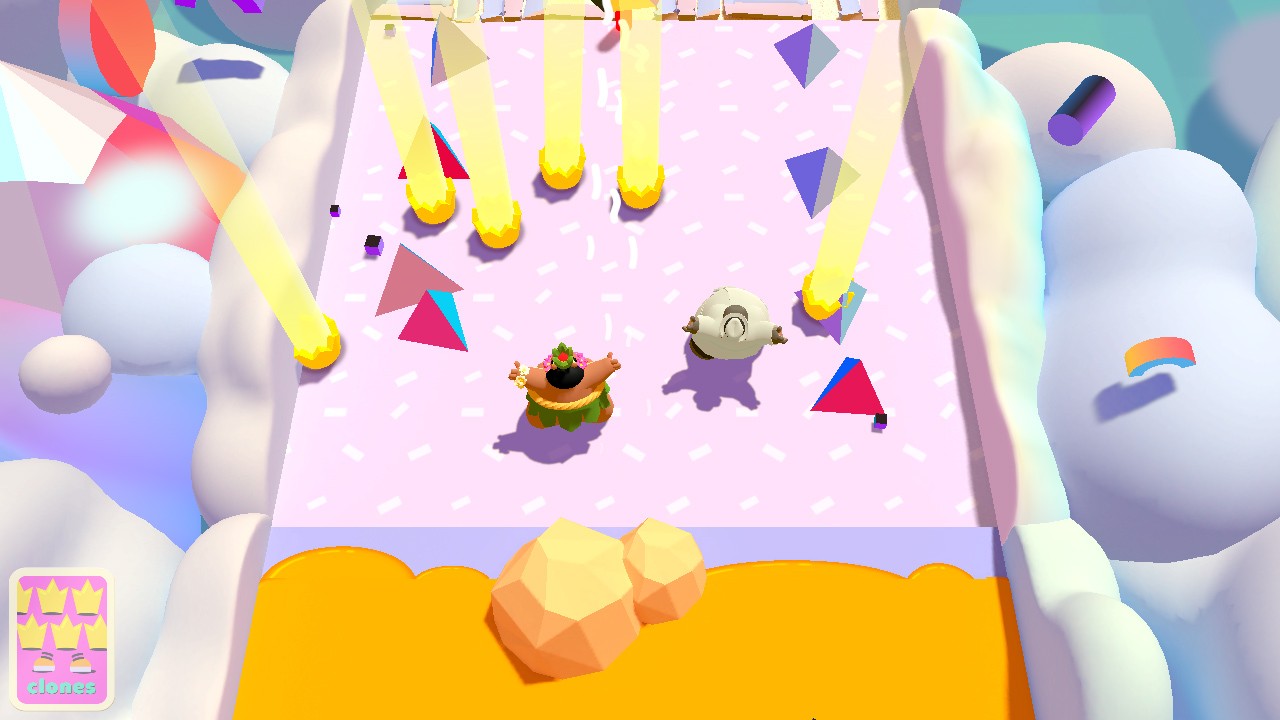 To control your crown-hungry hippo, the L and R bumpers will move the left and right leg respectively and, depending on how long it is held for, can turn the leg anywhere on a 180-degree arc. This style of movement is reminiscent of Bennett Foddy’s QWOP, albeit rightfully toned down to make it playable for all ages. The A button is the only other button utilised in Clumsy Rush, and it is used to attack your opposing hippo, but can also be used as a method of travelling quickly to catch up with your opponent.

Unfortunately for Clumsy Rush, its gimmick gets old fast. When there are only 3 buttons to use, you’d expect them to work flawlessly, but the controls don’t always respond to the inputs exactly how you’d like. I would often veer off to one side of the course at random intervals, adding to the frustration the control scheme already causes. Changing the controls to using the joystick to walk rather than L and R makes walking easier, but with this comes a lack of any real challenge and turns the game into a lacklustre obstacle course that most children would get bored with quickly.

Much like the hippos, the levels have excellent graphical design, especially for a small indie title. Each obstacle differs vastly from the last, with great care going into how they function. I enjoyed seeing my hippo slip and slide over a patch of ice, or spin and flail around on a rotating disc. Whilst the number of obstacles is limited, level modifier cards will shake gameplay up. These cards task players to navigate a level trapped in an ice block, or on a level full of oil, adding some much-needed replayability. I would have liked to have seen Clumsy Rush alter the layout of their levels more as, after a while, each level seemed to follow a similar layout to the last. This was bound to happen as each level takes place on a straight line and attempting to turn corners with my tubby friend would have made for lots of fun. 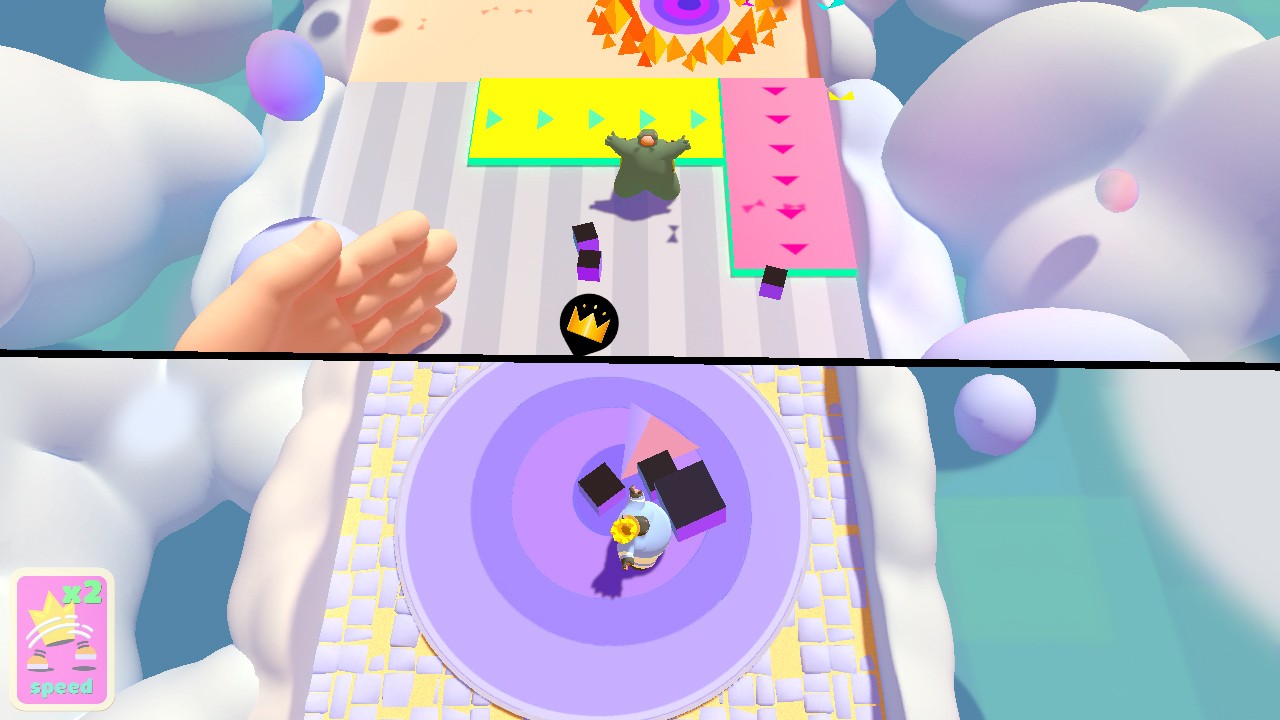 Clumsy Rush is marketed as a multiplayer/co-op game, but the options for playing with friends are fairly limited, as only two players are on the course at once. It may be hard to find four people interested in playing this game for a substantial amount of time, but duelling it out with only one other hippo never leads to any of those traditional co-op hilarities you can find with four-player games.

There is the option to play Clumsy Rush with just one player, but its existence is pointless. In single-player mode, there is no option to compete against a CPU, and so the only challenge is to walk to the end of the level. A simple timer challenge would make playing this solo game have some more meaning, and I hope this is something the developers look at if they are planning to update the game.

Clumsy Rush is a fun experience that seems like it should be a mini-game in a larger title. Its bright and cheery graphics make the game a joy to play, but this only lasts a few minutes, as there just isn’t enough content to make you want to keep playing. I doubt many will come back to Clumsy Rush after their first-time playing.

Sticking true to its name, this is a clumsily made title that feels like it should be in a collection of mini-games.