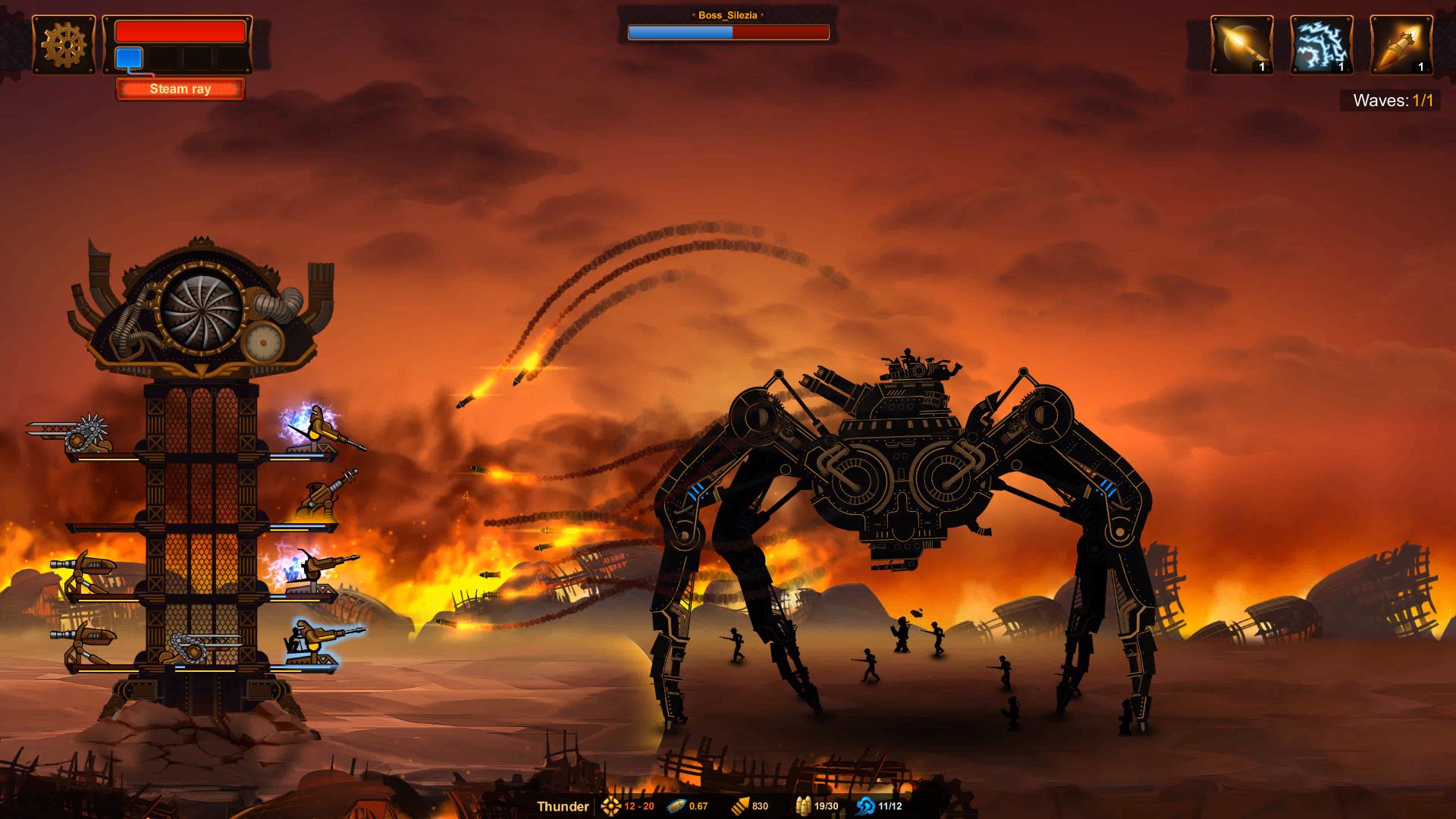 Tower Defence games have been rife on mobile devices for the past decade. People play them to burn up the hours as they travel to school, or commute to work. I’ve been guilty of filling my time with these short, sharp action strategy games. But, what I have found, is that the lack of detail, and variety of gameplay means I bore quickly, and want to move on to another title. I’ve been desperate to find a game that scratches this itch, but also offers me a fuller experience, so when I was offered the chance to try a game that has previously only been available on PC, I jumped at the chance. Steampunk Tower 2 is a base building, tower defence game that has you controlling a central tower, defending your position, and annihilating wave after wave of enemy assaults. The game has been developed by Dreamgate and is published by Drageus Games, and should come with a warning for how addictive it is.

Steampunk Tower 2 forms the second instalment of the franchise and picks up where the last one left off. If like me, you haven’t played that, then don’t worry, as there is no requirement to know what happened, to enjoy this addition. The gameplay revolves around a unique steampunk world that exists in Europe; you are the commander of a resistance group that is run by Lord Bingham. He enlists you to take charge of the day to day running of his army, you must move from country to country battling an evil group known as The Cult. The Cult wants nothing more than to destroy all enemies in their path, in order to take power for themselves. As you fight back your old enemies will become your new allies, and with them you will create new technology that will help you overcome the threats that will change the face of the world as you now know it.

The game follows a very simple premise, you must take on one of three mission types; Main story, cult attack, or survival. Each is represented with a different coloured pin. As you complete each one you earn money and resources that will help you to research and upgrade your technology. The cult attack missions fall into set positions and arrive at preordained times. You are free to ignore them, or you can auto complete them if you have completed the mission just one time. The survival mode allows you to earn money depending on how many waves you survive, the longer you last, the more money that you earn. The story mode is exactly as it sounds. When you take on this mode, you will be asked to hit some mission prerequisites, such as; certain guns, or upgraded levels, and once you have this sorted, you are free to attempt that level.

So, you pick which mission you wish to undertake, then what? Here is where the tactical element of the game takes place. Depending on how far into the game you have progressed, you will have a choice of 2 to 5 floors at your disposal. Each can hold a turret on either side. You choose which type of weapon you wish to equip from; machine guns, mortars, shotguns, tesla weapons, and so forth. Each of these can be upgraded and have their own strengths against specific troops. Machine guns are your all round weapon, mortars make mincemeat of tanks. Shotguns are great at short range, and tesla weapons, stun the robot walkers. The other weapons you are given have specific pros and cons, so experimentation is needed to get the best combined attack set up. 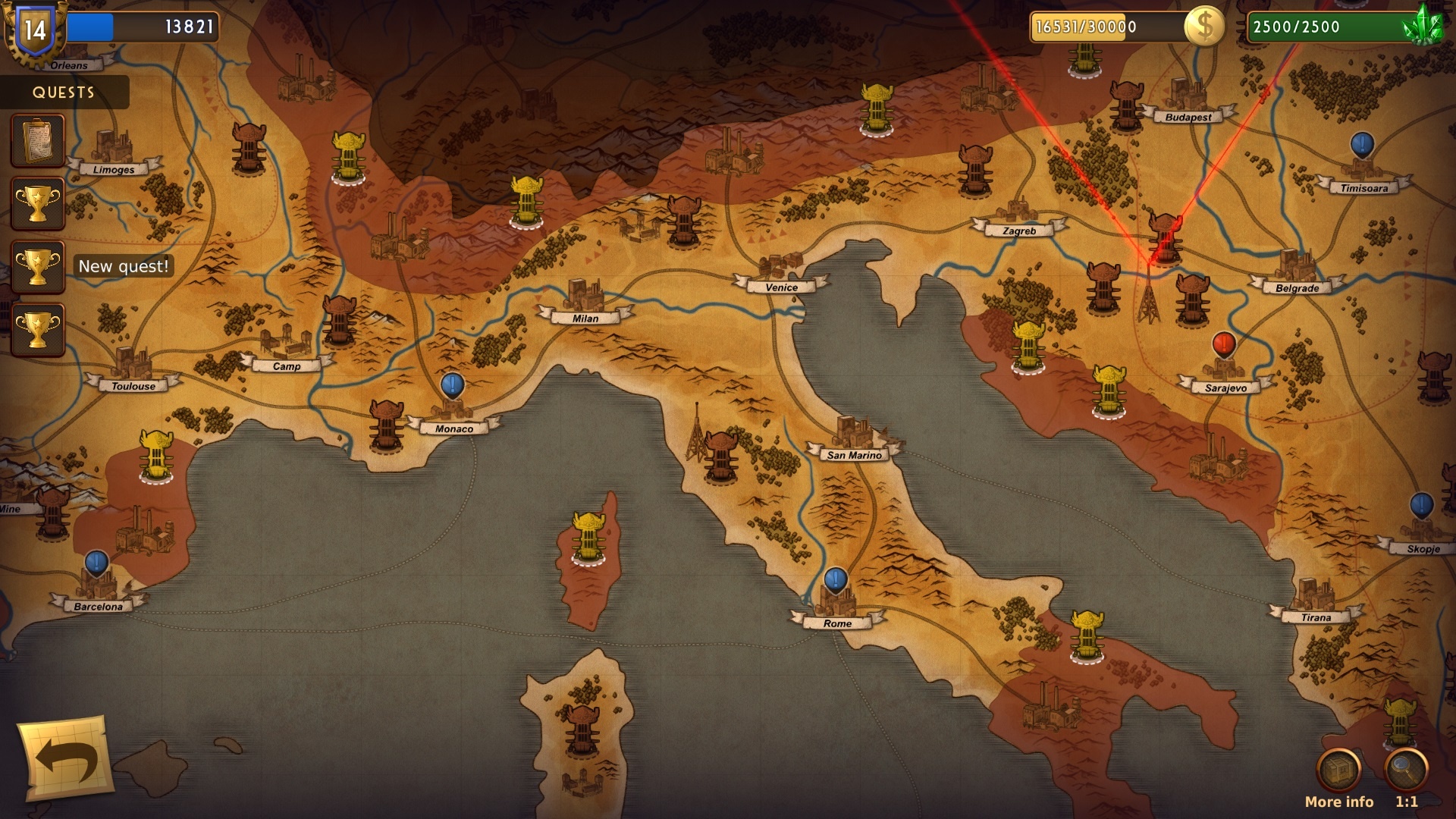 This is where it becomes a literal tower defence game, your rather phallic tower falls from the sky, and sticks into the ground, your turrets are deployed, and the battle begins. You are advised how many waves you will need to defeat. As the game progresses, you unlock special attacks and bonuses that can be used in each attack. Unleash a giant missile, artillery, or a lightning bolt. These can turn the tide of the war in your favour, but use them wisely, as they cost money to replenish, and wasting them can be the difference between victory and defeat.

Everything about this game is devilishly simple, but requires lots of forward planning. Just as you think you’ve gotten on top of things, The Cult makes you think otherwise, assaults on your factories, and lands pulls you back from the front line. It’s a constant to and fro, and though it’s repetitive in nature, it’s unbelievably addictive. Time will slip away from you as you try just one more mission. You want to upgrade a weapon, only one more mission to do that. Next, you want to move to a different country, and suddenly you should have gone to bed hours ago, but the feeling of tiredness is a sacrifice that was worthwhile.

Though we are in the dawn of a new age of consoles, Steampunk Tower 2 has not taken advantage of the power available to it. A 2D tower defence game that uses simple images to help tell its story. The character models are reminiscent of early Xbox One games, but have well-defined lines, and are pleasant to look at. The world map has a nice level of detail to it, without being overly complicated. The same goes for your home base. Everything is easy to navigate without blowing your mind with realistic imagery. I enjoyed the variety of landscapes that helped dress the battle scenes; it kept it interesting to look at, though it added nothing to the gameplay. It would have been nice if fire, water, or any of the other environmental effects impacted the movement of the enemy forces. If this was implemented, it would have added another layer to the action, making you rethink your plan of attack.

The audio is an odd mix of soft 50s jazz, and upbeat synthesized music. The latter is used alongside each of the battles; it is accompanied by the; bang, crash, wallop of artillery shells, and machine gun fire. It is loud, in your face, and suits the theme perfectly. The calmer jazz influence plays alongside the world map and base menu. This mellow tune allows you to calm down, giving you the time to think about what you want to do, and where you want to attack next. The combination is bizarre, yet it somehow works. 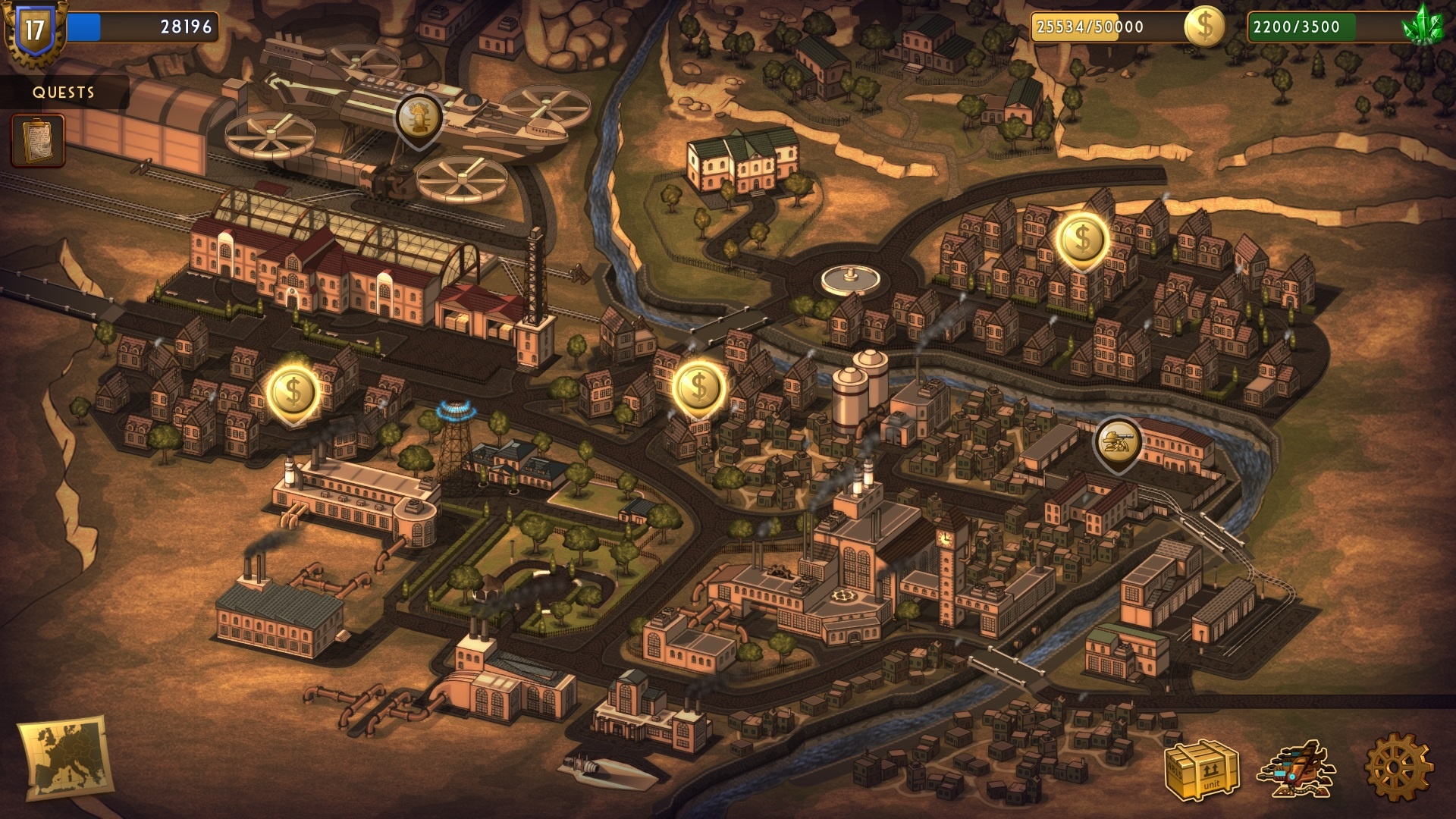 This is a button pushing, analogue stick wiggling affair. You must move each of your turrets from its position, to the middle of the tower to reload it quickly. This must be done in between attacks, and so precision, and quick thinking is a must. Fortunately, the controls hold up well. It’s simple to pick up, and all major moves are highlighted on the screen, so very few mistakes will be made.

Does Steampunk Tower 2 draw you back in, and demand that you sit for hours repeating the same task? Absolutely, it gets under your skin, and you’ll want to keep playing. The replay value is off the chart for this game, and though you may not progress quickly, you will still want to keep repeating missions. You’ll kill everything in sight, so that you can grab all the precious resources to upgrade your weapons and base. The achievement list contains approximately 30 different challenges, and with a little focus, and practise you will unlock the 100% status.

When a genre of game comes to console, that is effectively a mobile casual experience, I worry that it won’t hold up on a main console, or PC. But I was wrong. It doesn’t use all the power available to it, but what it does do, it excels in. It’s a fast-paced tactical tower defence game that will challenge you to think ahead, and then hope that your plan is successful. Do I recommend that you buy this? I do, but be prepared to lose your life to it, it’s that darn addictive. You are in charge of the army that will stop The Cult, will you succeed, or will The Cult take over the world?

A fantastic tower defence game, where you must battle The Cult and stop them no matter the cost.