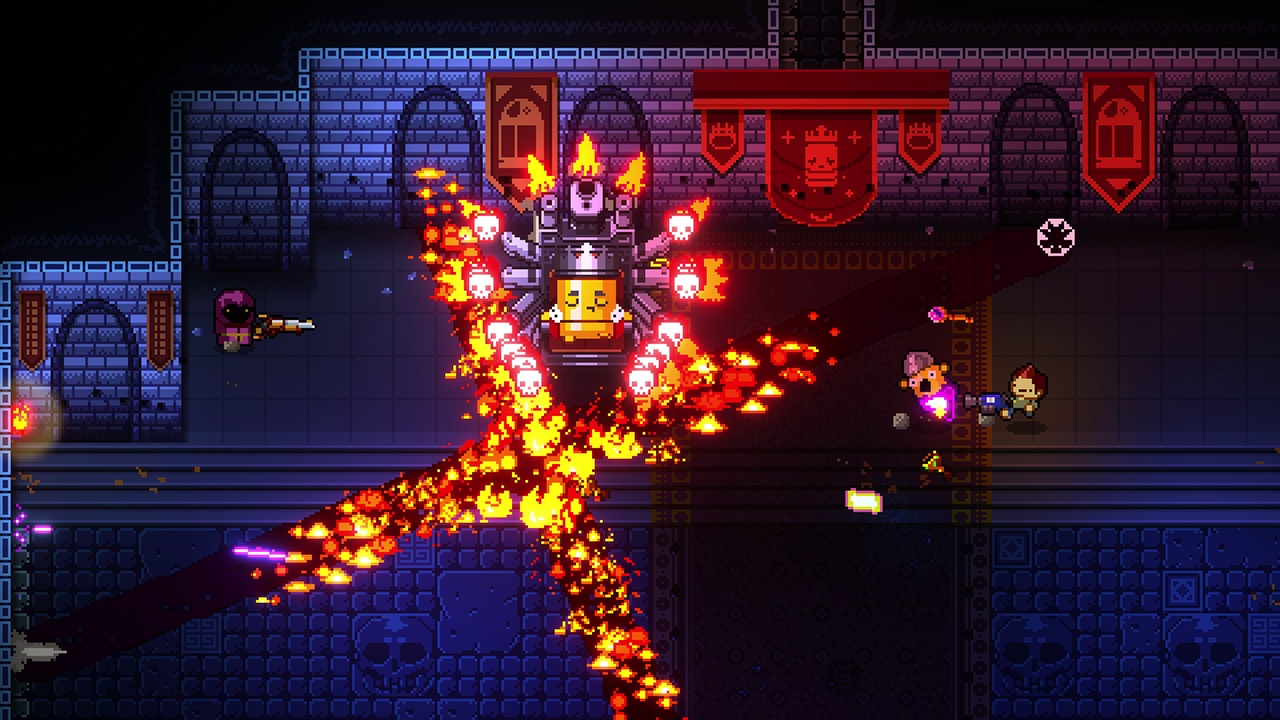 While roguelike games have been on the rise within the indie scene over the past few years, it is hard to find a game within the genre that can equal the level of polish and craftsmanship that Dodge Roll Games has put into 2016’s Enter the Gungeon. This fusion of bullet hell action and ever-changing roguelike exploration is a perfect reminder that sometimes the best games come from smaller studios.

The premise is simple; there are 5 floors to defeat within the Gungeon and each one becomes progressively more difficult. There are several rooms on each floor to clear that contain randomly generated layouts, enemy types, and rewards. And the best part? Well, let’s just say it’s called the Gungeon for a reason. There are over 200 different firearms in the game, ranging from; standard pistols to balloon animals, to Megaman’s mega buster. These are obtainable from chests, or by finding the shop located on each floor and spending your accumulated gold. Each floor is capped off with a boss fight, some of which are significantly more difficult than others.

Enter the Gungeon effectively encapsulates the addictive nature of roguelike adventure. While at first there may seem to be just a repetitive loop of venturing into the Gungeon, dying (very quickly when you’re new!), and then beginning your next run, it soon becomes apparent that this game has a lot of depth to offer. Players begin to save currency, which is collected by defeating bosses and can use it to expand the sizable catalogue of weaponry for their next playthrough. In addition, there are several quirky characters encountered within the Gungeon that become helpful merchants, side quest distributors, and more. By the time you sink an hour or two into the game, the Gungeon begins to brim with much more life than you would expect to find in a game about bullets. 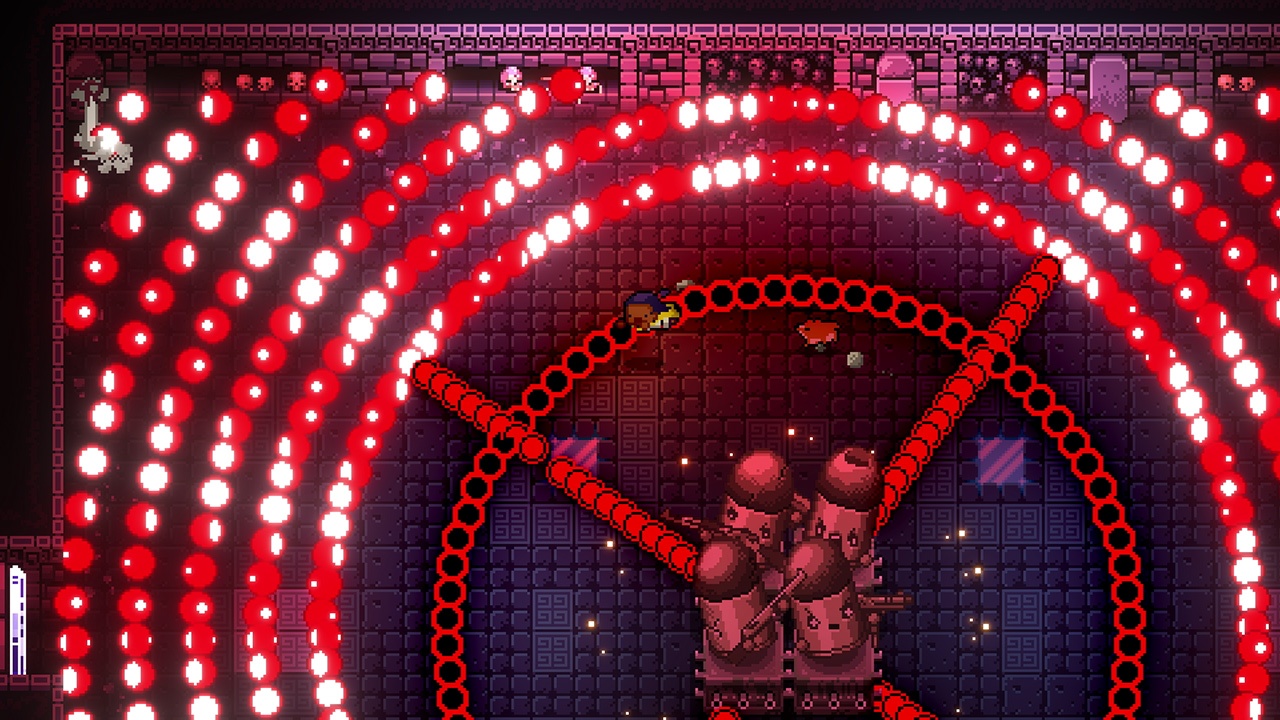 Unfortunately, there is not much of a story to write home about here. Enter the Gungeon is a bullet-hell twin-stick shooter, so while a thrilling plot line is not what will draw most players into the genre, a little more dialogue may have been welcome. This is especially true considering how funny the writing that is in the game can be. The naming conventions of the weapons and enemies, and the small lines of dialogue offered by NPC’s are a treat.

There is also an overarching evil villain within the game who will steal pickups and items left on the floor if you leave the current room. In their place, he leaves a note that taunts you not to be so careless. I would have assumed before playing the game that these constant gun puns would end up becoming tiresomely jumbled together. Honestly though, this is not really the case and whenever I come back to this game for some good old couch co-op I am impressed by how fresh the game seems.

Technically, Gungeon is also very strong. The controls are responsive and simple in the way that you would expect from a well made twin-stick shooter. Aiming is easy, and the dodge button feels like it has just the right amount of weight to get your character out of harm’s way. Whenever you get hit by incoming fire, there’s never a sense that you were let down by the controls, or that you were unequipped to deal with the situation. 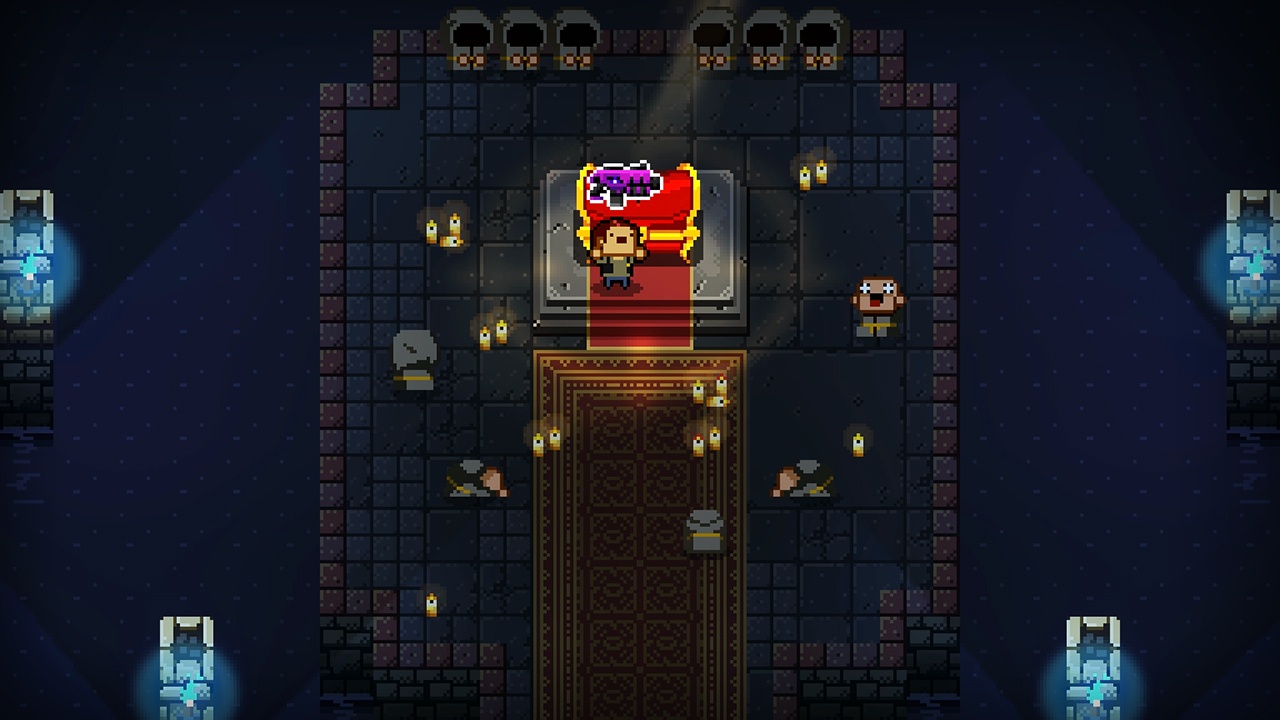 The sound design is also strong here when it comes to the sound of each weapon, and although the music is nothing to write home about, it does get the job done. Every time you reach a new floor the music seems to intensify even more, keeping tension present as you progress. Each enemy makes a specific noise upon death (which, trust me, is always satisfying to hear) to let you know that they’re down. This is especially helpful when enemies die off-screen or are killed by a co-op partner.

What makes Gungeon stand out the most for me is the theming of the world. Everything in the game is a pun about guns, bullets, holsters, shooting, and the like. Each weapon you find has some quirky quality, whether it’s the name or a unique ability. This makes it exciting to open chests and find new guns, while also keeping the game feeling fresh each time you sit down to play.

Enter the Gungeon displays a level of polish that puts it in the upper echelon within both the roguelike and the bullet hell genres. It has a quirky, humorous setting and addictive gameplay that kept my friends and I coming back for more. There are seemingly infinite guns to unlock, and with the game becoming so challenging on the later levels, we will definitely be entering the Gungeon many more times in the future.

Enter the Gungeon is a top tier bullet hell experience. Its snappy controls, wonderful theming, and enticing gameplay loop, will keep you coming back.