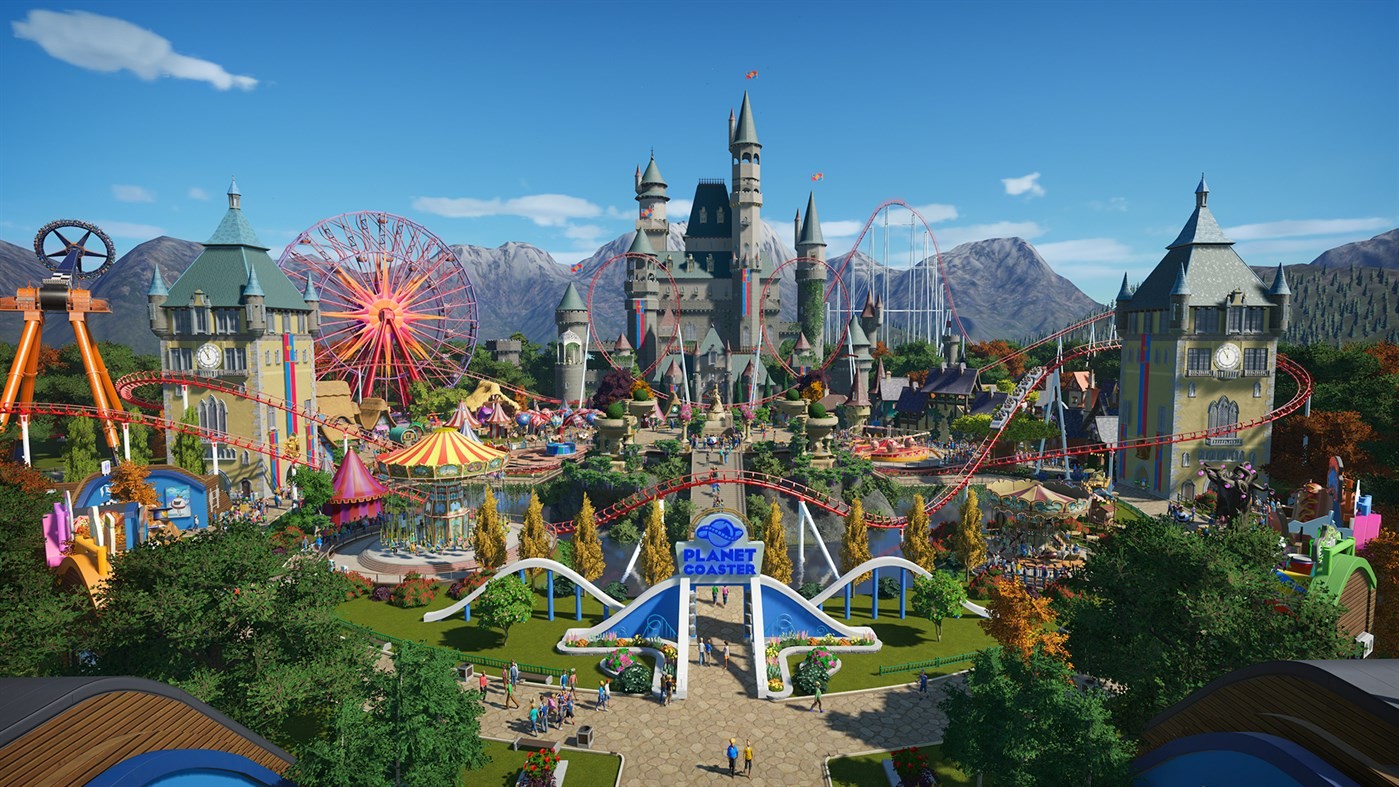 If you’ve been a gamer for three decades or more like me then you will have possibly experienced classics such as Theme Park and the Rollercoaster Tycoon series. If you remember playing those titles all those years ago you can probably relate to the fact they were such fun, unique experiences which would suck you in for hours and hours. Before you knew it, you were twelve hours deep into deploying janitors to mop up sick off the floor or building a rollercoaster too tall and fast so that fatalities would happen. I have fond memories of these games so naturally I was ecstatic when I heard that popular PC title Planet Coaster was being ported to consoles.

I met with the developers of Planet Coaster way back in 2016 when they carried out a developer session at EGX Eurogamer in Birmingham, UK. The game was briefly revealed at E3 2015 before this event, but I was honoured to attend a behind the curtains event. What excited me was the fact that Frontier Developments had previously worked on Rollercoaster Tycoon 3, Thrillville series and Zoo Tycoon. They are also responsible for the recent title Jurassic World Evolution. At the time Planet Coaster was announced, Rollercoaster Tycoon 3 was over a decade old and I never thought we would see another theme park construction and management simulation game ever again.

It is important to note that Planet Coaster is a spiritual successor to Rollercoaster Tycoon 3 and not related to that series of games in any way, shape or form. 4 years on from the release of Planet Coaster on PC it has had an opportunity to progress and build from alpha phases all the way through to a full tycoon experience and it scored glorious reviews on PC when it first launched.

Fast forward to E3 2020 which became a digital event due to COVID-19 and I never expected the stand out game to grab my attention would be Planet Coaster. That said, I never ever expected a game of its calibre to come to console as it is a demanding game on PC and is insanely in depth. Think of the old Rollercoaster Tycoon titles and elements and the variety of building and assets on those games and multiply it by a million and you’re there! There is so much to Planet Coaster it is the best rollercoaster ride you’ll embark on! But how does the game perform and function on consoles, keep reading and you’ll find out.

I’ll go right ahead and state that I have been playing Planet Coaster on Xbox Series X which offers smart delivery. This essentially means that though you can play Planet Coaster on Xbox One and Xbox One S or X, if you upgrade to an Xbox Series X or S then the game will be upgraded to the next generation version for no extra charge. What is even better that at the time of writing on 12th November 2020, the game is available to download as part of the Xbox Game Pass subscription! Apologies Playstation gamers, you’ll have to purchase if you want to play, but I absolutely promise it is worth every penny.

The moment you load Planet Coaster Console Edition you can’t help but feel happy and jolly with the excellent theme song which is unchanged from the PC edition, it really does give you a big beaming smile when you load it up for the first time. Now I have to admit to you now that I am very apprehensive when it comes to titles that have been ported from PC to console, specifically RTS games and point and click simulation games such as Planet Coaster. The reason I say this is because I am terrified that they will be watered down versions of the full PC version because a game as spectacular as Planet Coaster absolutely deserves anyone to play the full monty. I can now tell you that after pouring in plenty of hours on the Xbox Series X version of Planet Coaster that I honestly couldn’t tell a difference from playing on my expensive gaming PC that cost me four times the amount than I paid for the Xbox Series X. 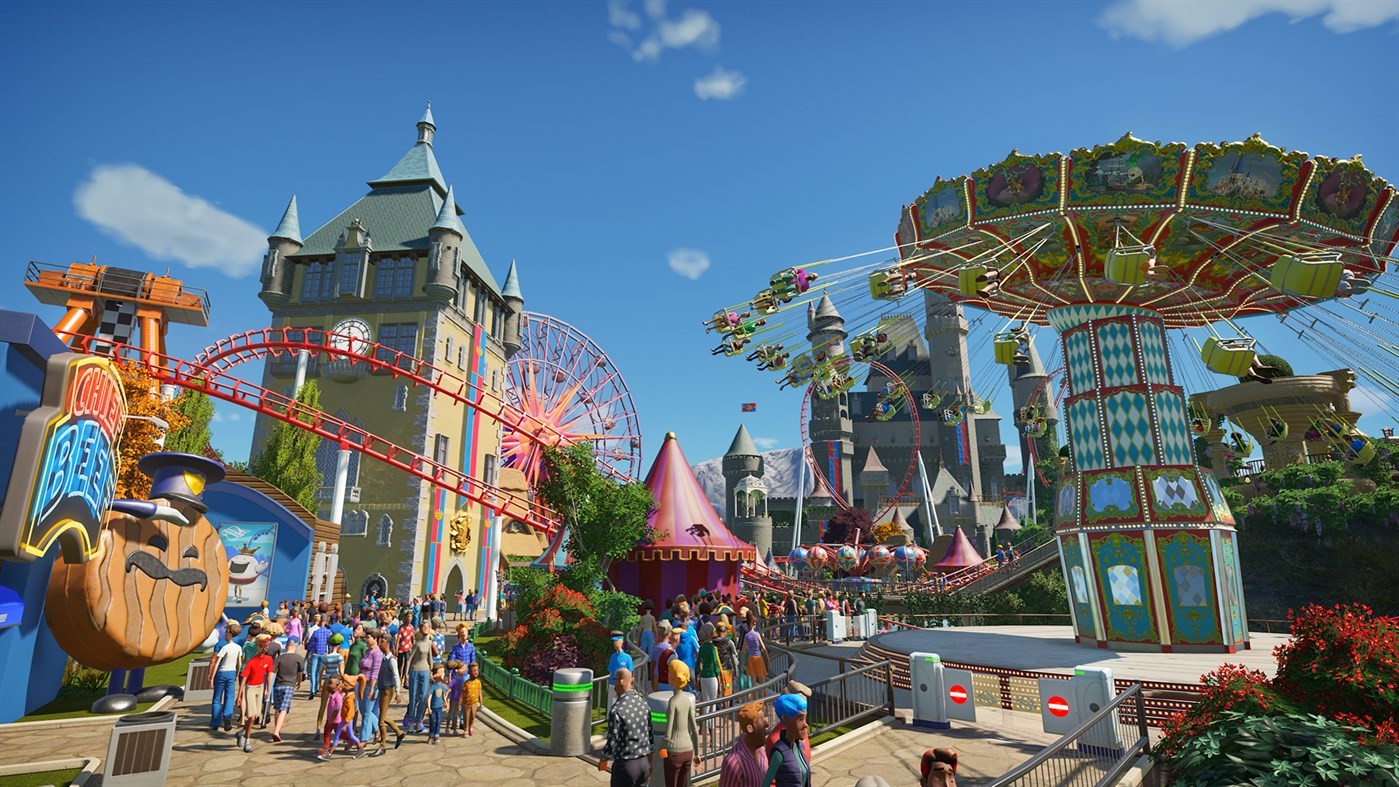 There has been no watering down here from Frontier Developments and I’m so happy about that. But the real challenge for the developer was transforming a hugely successful park management and construction sim which is built for mouse and keyboard into a game that utilises a console controller. I mean I know nothing about game design, but to me this sounds like a logistical nightmare and not something that happens overnight. But we will come onto the control functions in just a bit.

The main screen will greet you with several options to get going with. Career, Sandbox and Challenge are your main features. What is really impressive though is that the Frontier Workshop is available on consoles as well. This allows you to upload your own custom created rides, parks and assets along with the ability to download other players’ creations and play them for yourself. You also have the functionality to subscribe to your favourite creators. This seriously gives Planet Coaster legs of longevity on console, something I didn’t expect with the Console Edition. Quite often even when a PC port isn’t watered down it misses out features such as this, so this is a massive green tick for the game going forwards.

Starting with the Career mode will push you through a tutorial level if you like. You’ll be learning the ropes with Oswald B. Thompson, who narrates and holds your hand through the first moments. Oswald is a Scottish joyful soul who urges you to think about customer happiness, cleanliness and keep park clutter to a minimum. This early stage also introduces you to Cynthia, who is the accountant where money, figures and data are all she thinks about and she will be nudging you to bump up your prices every now and again. Then there is the young influencer Lucy, who has 900 followers and likes to be the centre of attention. The dialogue and voice acting through this really is done in a cheery casual manner and really helps you learn the controller basics. Here you’ll pick up quick and easy how to navigate, zoom in and out, browse the menus, build and knock things down, all the basics to get going. There are 9 levels to start off with on Planet Coaster and whilst I haven’t played all of them, there seems to be three scenarios for each of them which increase in difficulty with each stage. Each scenario has bronze, silver and gold stars which are earned for reaching objectives during the stage such as a certain number of visitors to your park or getting a certain sum of money in the bank, there are so many to list but every scenario is different enough to keep the fun factor and keep you engaged. There is a vast array of content here that will easily keep you going for hundreds of hours if not longer if you went at your own pace.

Outside of the basics you’ll be responsible for staff management on a deeper level than previous Theme Park titles, you can go as deep as arranging their staff room environments, their roster pattern and their level of training and learning and development. I could pick apart every aspect of this game but let me tell you this, the customisation is unreal as you can tailor your Theme Park exactly how you want it. Sure, some of the scenarios may engineer your way of play to achieve certain targets, but Sandbox mode is where you can let your imagination run wild.

Sandbox mode doesn’t need as much explanation other than the fact you start your park with a completely blank canvas, unlimited money and resources and you can build and customise your park to your heart’s content. You can create theming for your entire park or each section, pirates, wild west, fairy tales and the way you can execute all of this is stunning. The ability to theme the queue lines, the surroundings and even the shop buildings. If you played the Rollercoaster Tycoon games and love them to bits you will be blown away with Planet Coaster. 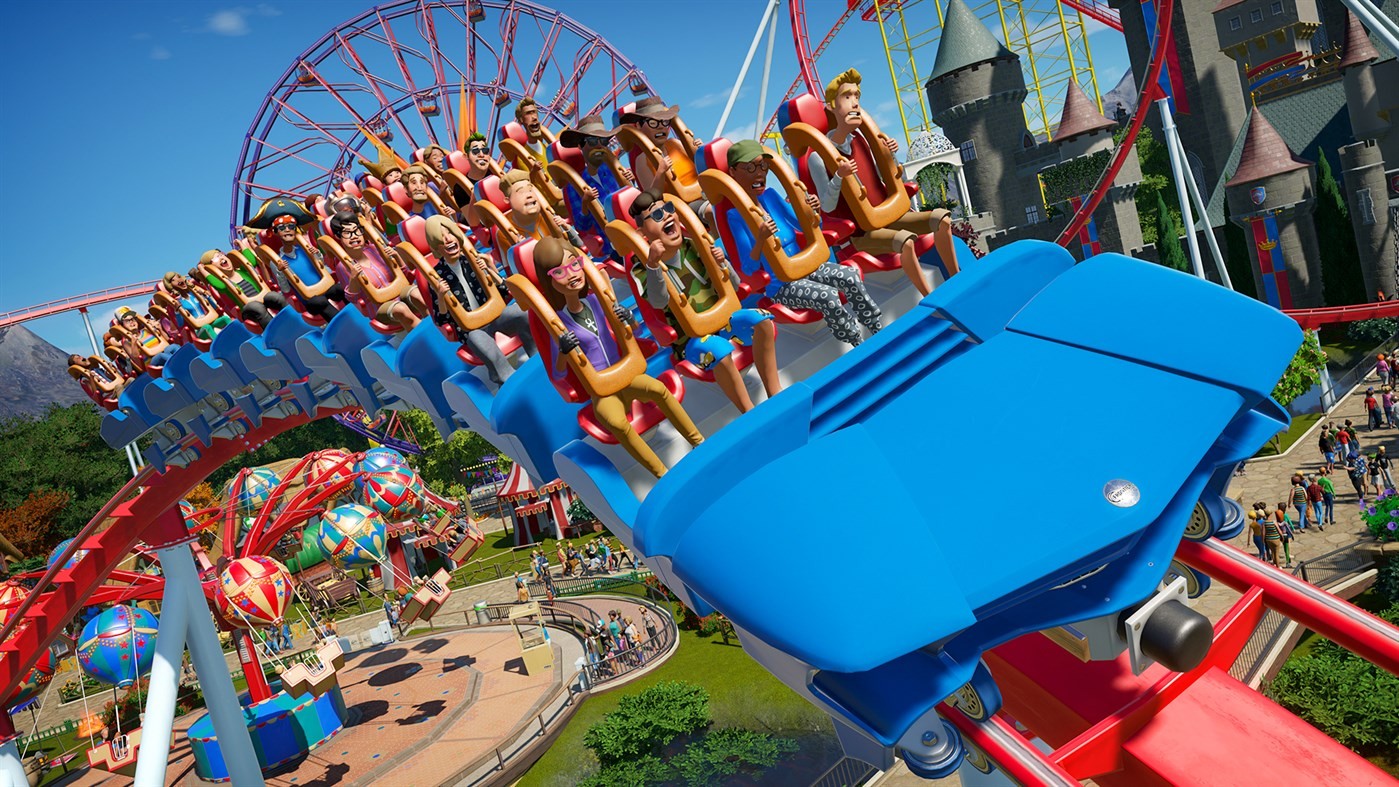 If you want to create an asset of your own, then absolutely it is possible to create endless items of your own and even share them with the world or import others creations into your own park. The opportunities are endless with Planet Coaster. It is clear that at the present time the creations on Frontier Workshop for consoles are nowhere near at the level as the PC edition but that will likely change over time.

The most impressive feat here is how they have essentially transformed the PC version of the game to console but adapted it to use the controller. Using a controller with this game is simple and easy with simple left and right shoulder button clicks to cycle the menus to using the analogue sticks to control the camera and zoom in and out. It can be a bit fiddly when coming to serious editing like placing portions of coaster track going through terrain in a tunnel but it doesn’t get too tedious. Within half an hour it becomes almost natural to use a controller and you forget that it is best with a mouse and keyboard.

Graphically I’d say at least on Xbox Series X the game is on par with the PC version at high or ultra high settings, it ran very smoothly with no issues, slowdown or framerate issues even when my park was packed to the rafters. I could imagine the demands on the previous generation of the Xbox family or PS4 could notice a bit of a downgrade at least in return of the visuals.

Planet Coaster Console Edition is an absolute win and a delight to play. It is a game I’d gladly pay full price for again even though I already own the PC version. Frontier Developments need a huge pat on the back for all their efforts with bringing the pretty much full version of the title to console with fantastically adapted controller functionality. I would go as far to say that Planet Coaster Console Edition is up in my top few games of the year simply because of its huge amount of content, replayability and longevity and being near identical to the PC version. I’d urge any fan of past Rollercoaster Tycoon games to stop what they are doing and buy this because it is incredible and will keep you playing forever. Here is to hoping Planet Zoo is the next title from Frontier Developments to come to consoles. Planet Coaster Console Edition is an absolute must buy! I don’t give many titles full marks, but this one truly has my blessing.

REVIEW CODE: A complimentary Microsoft Xbox One Series X/S code was provided to Bonus Stage for this review. Please send all review code enquiries to press@4gn.co.uk.

Planet Coaster Console Edition is a PC port which isn’t at all watered down and is identical to the PC version which runs sublime on Xbox Series X with the full range of content which will keep you busy forever. The addition of Frontier Workshop increases its longevity hugely.