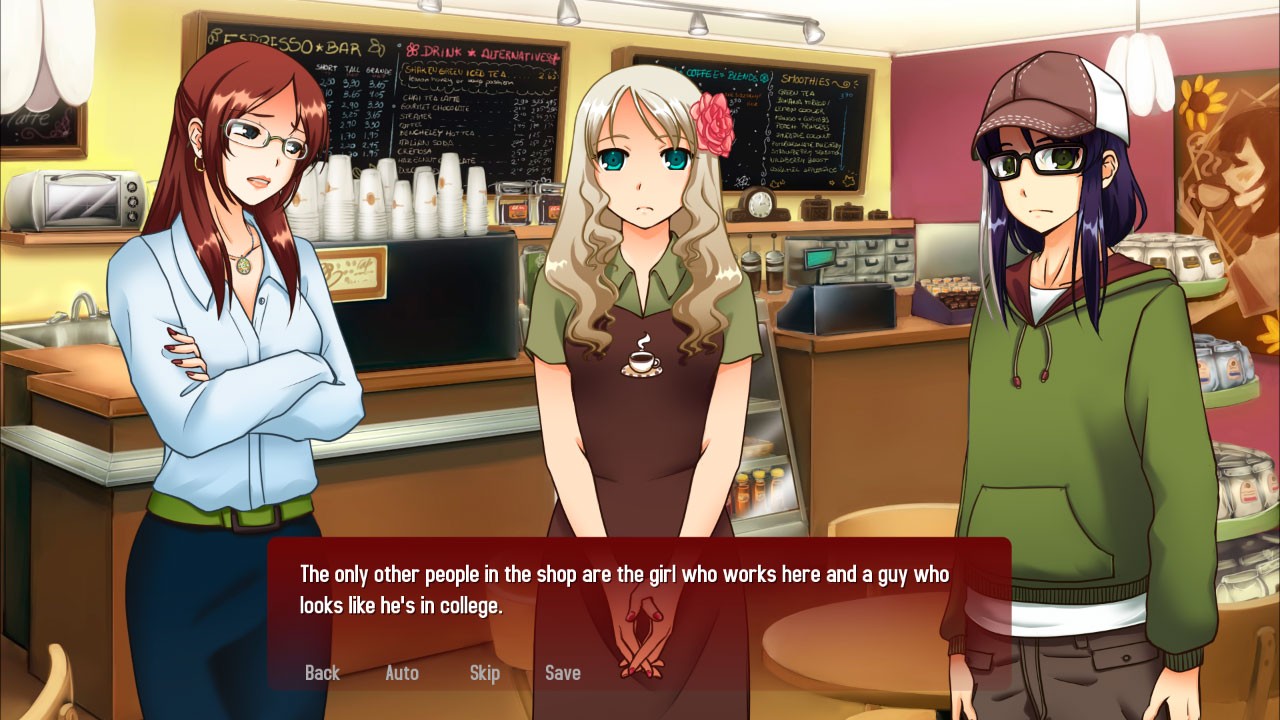 I’m sure that we’ve all watched detective dramas and films, and thought, this is easy, I know who’s done it. You now become a detective and prove your own innocence in Jisei: The First Case HD. Developed by Sakevisual and published by Ratalaika Games. This supernatural classic cult novel asks you to solve a crime while proving that you are not guilty.

The story is set in a cafe in an ordinary town, on a normal day. Our unnamed protagonist has entered to grab a caffeine injection. He soon discovers that even a triple shot mocha isn’t enough to keep him awake. As you stir, you order more refreshments. Upon ordering you fall ill, “Chance” the waitress points you toward the restroom. You know this isn’t you feeling sick. This is your unearthly power showing that someone has died! Here is where the story begins.

A female dead on the bathroom floor, knife in her chest, and you stood over her body. Can you blame people for thinking you did it? Absolutely not, but that wouldn’t be the truth. And this murder can’t go unsolved. The plot revolves around 3 witnesses, 1 detective, and yourself. The action spans 4 separate rooms; The cafe, 2 bathrooms, and the hallway. Each form a key part of the investigation and searching them for clues is a must. Detective Gurski asks for your help. He gives you free rein to question the witnesses/suspects. All he asks in return is the information that you have collected.

The 3 witnesses are; Chance, Kizaki a college student, and Miss Bergstrom who’s HR for a speciality firm. As the questions intensify, you discover that the characters’ lives are intertwined. Confusion and twists and turns await you as you attempt to unravel the truth from the lies. Our lead character has supernatural powers. One touch of a body and he sees their last living moments. Shooting pains where the knife or bullet strikes, or the feeling of hands around your throat. He feels it all! If this wasn’t odd enough, he also starts hearing a voice in his head. This person warns him not to trust anyone and helps you to solve the mystery. It’s all strange, but I went with the flow, and waited to see how it would play out. 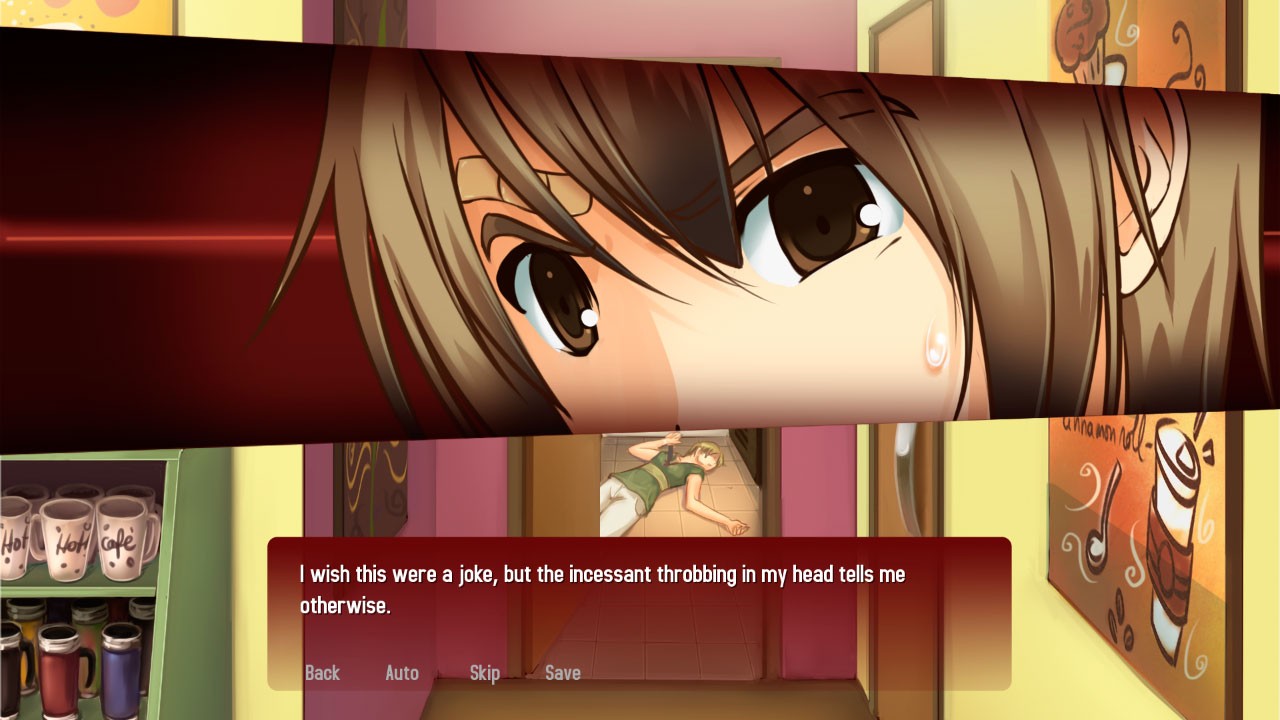 Jisei is a hearty mix of murder mystery and visual novel (VN). If you’ve never played a VN, they are relaxing, but very word orientated. Your choices help to decide how the story finishes, and there are many endings to experience. This game has a lot of these redeeming features, but is much more interactive. You are free to select the location, who you wish to question, and the line of enquiry you wish to take. Unlike a VN which feels very passive, in this title you have more responsibility. This gives you a sense of ownership. You control the investigation, and you piece together the clues. When you are ready, it is you, and you alone who may say who is guilty, even if you are wrong.

I will be honest at this point and say that when I first switched this on I said, “What have I let myself in for!” Now, I love VN’s, I really enjoy reading, and most of the art styles and audio bring the theme’s to life. But when I have finished work at 01:00 am, I didn’t fancy sitting and ready a novel. Oh, how wrong I was. I was hooked within 5 minutes, every element working together to sell this story to me. I couldn’t put the controller down. My wife was a little confused at 02:30 am when she discovered me in a darkened room solving a murder mystery. She knows me well enough to not question my madness. And my detective journey continued. I had to see how it ended, and my only regret was when I woke at 06:00 am feeling exhausted, but man was it worth it.

As the tale concludes, you must piece together the clues, and point the finger. I chuckled to myself, ran through the dialogue choices and smiled confidently. I had got the right person, had I heck! The detective called me a fool for getting it wrong! 2 options were now available; replay the game to reset the clues, or take a second chance and point the finger again. Even though I got it wrong, it was fantastic. I have yet to solve the crime, but I’m sure I will tonight, or perhaps tomorrow, who knows!

Jisei’s presentation is influenced by Asian culture, with distinct Manga elements. The character models are bold, and their expressions are over the top. Without reading the text, you knew the atmosphere that the developer was creating. Like with most VN’s, there is little in the way of movement, and the only animation applies to the character’s face. For me, I never tired of how it looked, as the imagery supported the story so well. I did however find that the backdrops were limited because of the story being set in only 4 rooms. I usually crave more variety, but in this game, it worked with the theme, and it added an air of suspense. 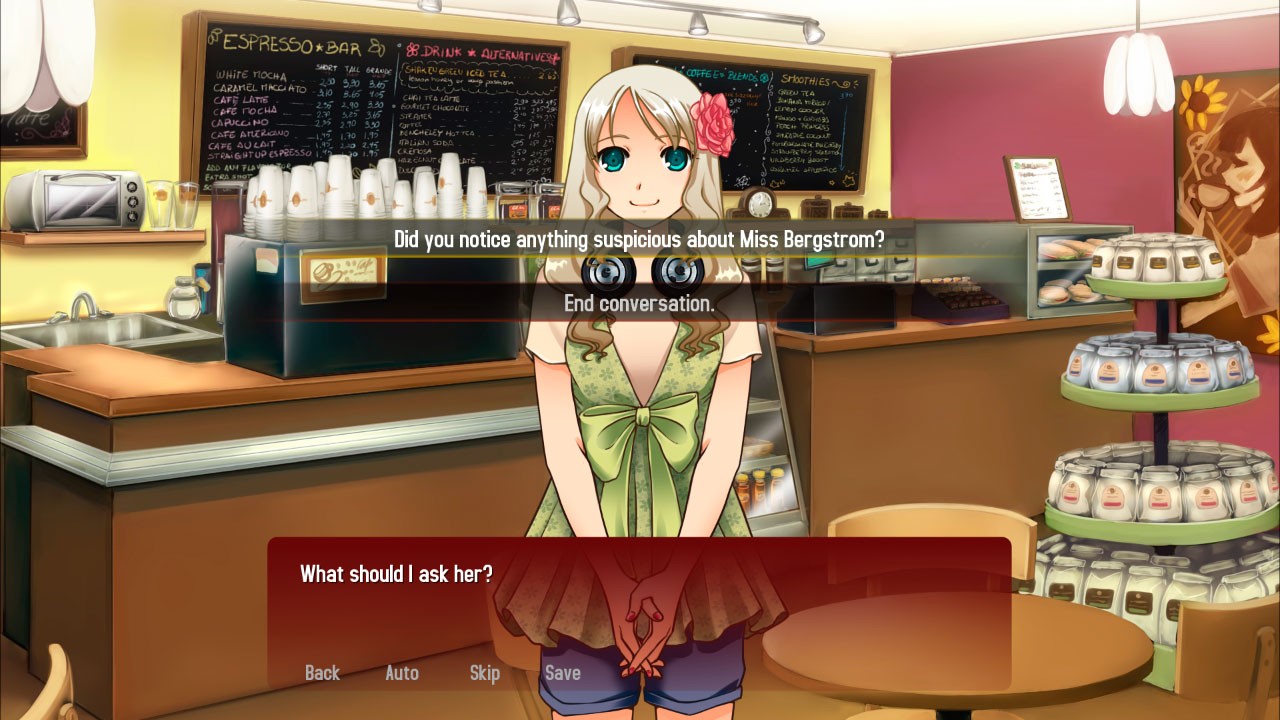 With a murder mystery, it’s all about the atmosphere and the characters. If either is poorly executed, it kills the game off before it’s begun. Fortunately, Sakevisual has delivered on this front as well. A moody soundtrack plays out, adding drama and tension. The ambient noise of the coffee shop breaks up the ominous feeling. Even when a murder occurs, people need their coffee. The acting on the voice-over work was spectacular. It was: funny, aggressive, and sad. It added an extra layer of doubt and muddied the water to where I didn’t know who was innocent. What was odd, was, everyone else had a voice except for the unnamed protagonist. I understand that the developers want you to be the voice, as you are solving the mystery. Yet, it felt weird as I don’t have supernatural powers to see how dead people are killed. It would have worked better with the lines being delivered by an actor.

Visual novels are a simple affair when it comes to the use of a controller. Use the analogue stick to move through the dialogue choices. RB to speed the text up, and the X button to skip. If you are so inclined, you can skip all the information to reach the finale. But that would be pointless! It would be like starting a book, and reading only the final chapter.

The story takes around 1 hour and 30 minutes to get through. You then become; Judge, jury, and executioner. If you are some super spoof, that will be mystery solved, pyjamas on, and home for bed. But for the rest of us mere mortals, you will need a second run through to re-read the clues. Achievements are rewarded depending on how you interact with people. There is no way to get them all in one sitting, so several runs will be needed. This is where the aforementioned text skipping comes in handy. You want that 100% record, but don’t want to make the effort, then skip away. If you are a pro detective, 2 hours will be the timescale, if not, around 5 to 8 hours will get you across the finish line.

Jisei is a visual novel with a twist. It’s a lot less wordy, and more focused on allowing you to explore and develop the plot. With several red herrings chucked in for good measure, you will have to keep on your toes to solve this crime. Would I recommend it? Yes, without a doubt. It is one of the most enthralling and captivating gaming experiences that I’ve had in a long time. It’s stunning to look at, beautiful to listen to, and a mystery from start to finish. You have nothing to lose by picking up a copy and unleashing your inner Columbo.

When all you want is a coffee, how can someone be selfish enough to get murdered in the bathroom? Your quiet day is ruined, and everyone is a suspect in this classic murder mystery.