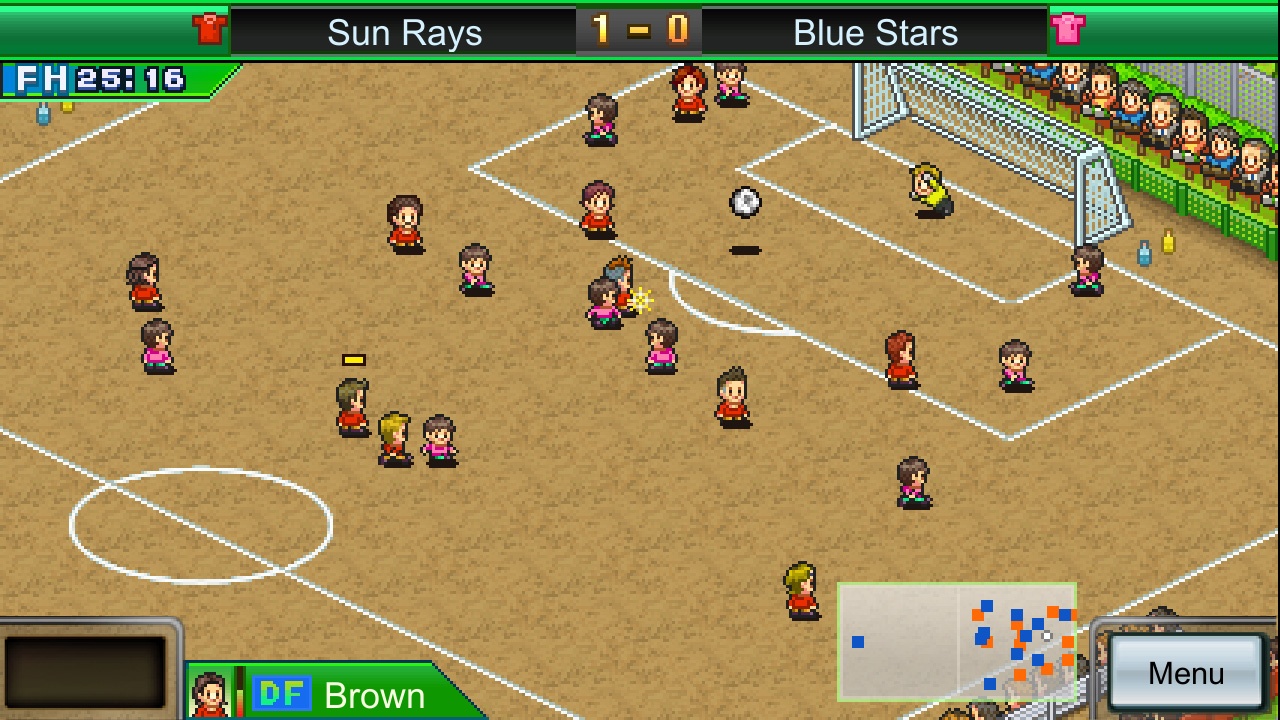 When it comes to the genre of football management within video gaming, it can often lead to a game of two halves. There’s an unprecedented feeling of euphoria when you build your very own dream team and lead your club to glory; whether it be from a particularly scrupulous signing or from your own corporate decision making. However, they can also contain a plethora of menus and tactical decisions that can bog the genre down a bit; often leading to an over-complicated mechanic that eventually leads to a disinterest in playing the beautiful game into extra time. The latest of such games comes in the form of Kairosoft’s Pocket League Story as it kicks a release onto the Nintendo Switch, but is this a game that will get promoted to the higher divisions of gameplay, or will it simply be another management game that gets relegated to the lower tiers of gaming?

If you’ve ever played one of Kairosoft’s titles, whether it be on the Switch or other mobile platforms, you’ll instantly recognise all of its presentations. You can’t deny that the titles in Kairosoft’s repertoire contains a certain charm with their graphical presentations and easily accessible styles of play. If you’re a fan, then I’m pleased to inform you that Pocket League Story is no different. However, if their appeal has never caught you, then I’d urge you to at least try this game, because as far as I’m concerned, this is Kairosoft’s most playable title to date, containing not only all of its charms and playability through association, but also presents one of the most playable football management sims that I have ever had the pleasure of playing.

As with most games that deal with a similar premise, you are tasked with taking over the management of a lowly football, or soccer, club and through clever management, both on and off the pitch, develop them into a world beating team. Your first task is to name your team, choose their strip and designate a coach that suits your training regime, preferred playing style and formation. Once these formalities are out of the way, then the game opens up to give you control of everything that surrounds the club. These range from bringing new players in and developing them, expanding on your club’s facilities and creating a family-friendly environment in order to attract a solid fan-base. As you begin playing matches, producing results and expanding upon your footballing empire, you also begin to attract the attention of sponsors with whom to delegate; giving you overall control over the complete running of your club. 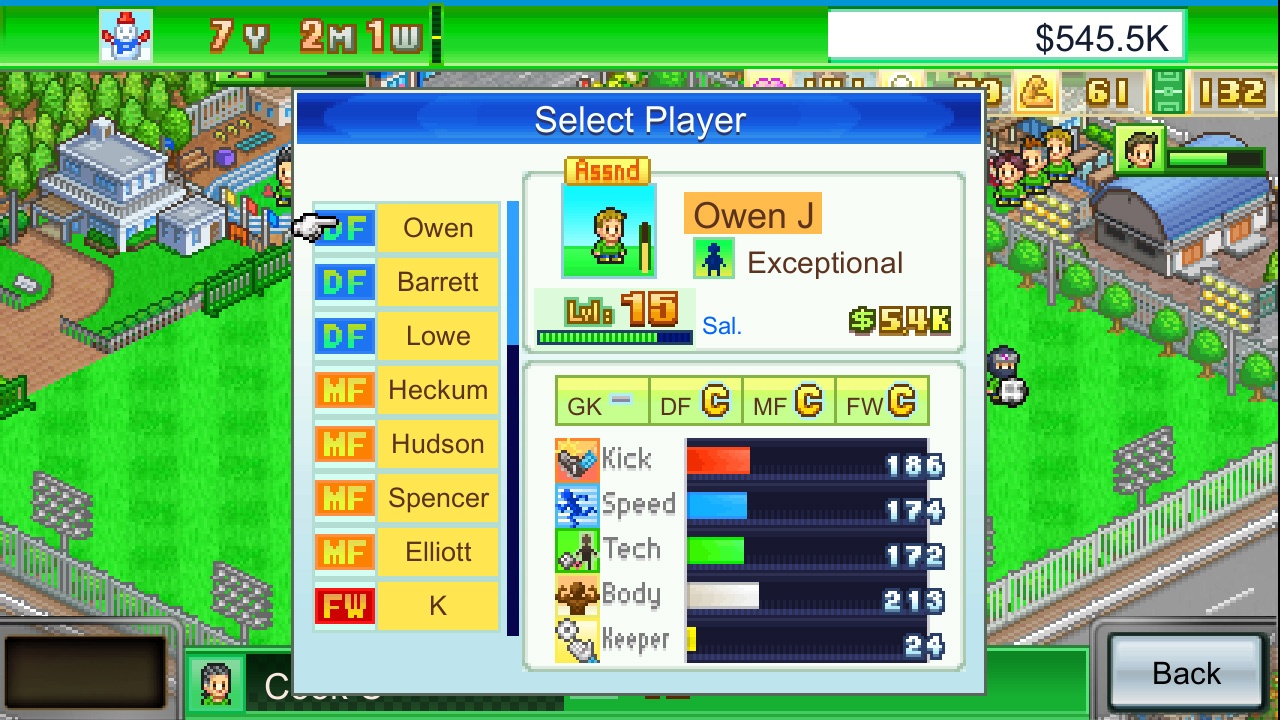 The game does a good job of easing you in gently, recommending certain players and options with which to tinker with. However, once you get a grasp on the mechanics of how it plays, you’re pretty much left on your own; leaving you to weave your magic as you begin to watch your club grow and develop in an instantly accessible and addictive way; one that simply lures you back onto the pitch time and time again. As you develop certain areas of your club, you begin to unlock a plethora of extra options, such as new facilities to build, tougher training regimes and more promotional events in order to attract more fans and league attention. These also combine to develop a number of other factors, such as financial gain and training points, with which to buy further players to strengthen your squad and enhance their capabilities. You also begin accruing other elements which allows you to negotiate with more lucrative sponsors and promote yourself through fan-based activities, such as autograph signings and club tours.

There’s always something going on within the game, whether it be the players developing on the training ground or a new facility being built. However, despite the amount of options available and the number of assets that need to be kept an eye on, the game never feels overwhelming, instead producing a mechanic that is easily accessible and controllable. You are never penalised for anything, everything you do simply goes towards building a bigger and better club. Much like your squad and the ground’s facilities, the more you develop, the more you open up, including the amount of cup and league matches available for you to participate. Before long you begin to see the fruits of your labour develop, with a larger stadium to play in, turfed training grounds and a series of facilities from swimming pool and gym to a local fast food restaurant and recreational park.

During match days, you can sit back and watch the game unfold before you. You don’t have a direct bearing on the match, apart from adjusting line-ups and formations, choosing a play-style and, at times, utilising a special ‘aura’ technique that produces the best out of specific players. Represented by a glow of flames around the player in question, this ability literally sets them alight, producing a performance that sees them burning through the competition and setting the game alight with some impressive techniques. It can often be the difference in tight matches. Although quite basic in its representation, each of these matches do contain enough for you to read how certain players are performing and how your team plays overall. 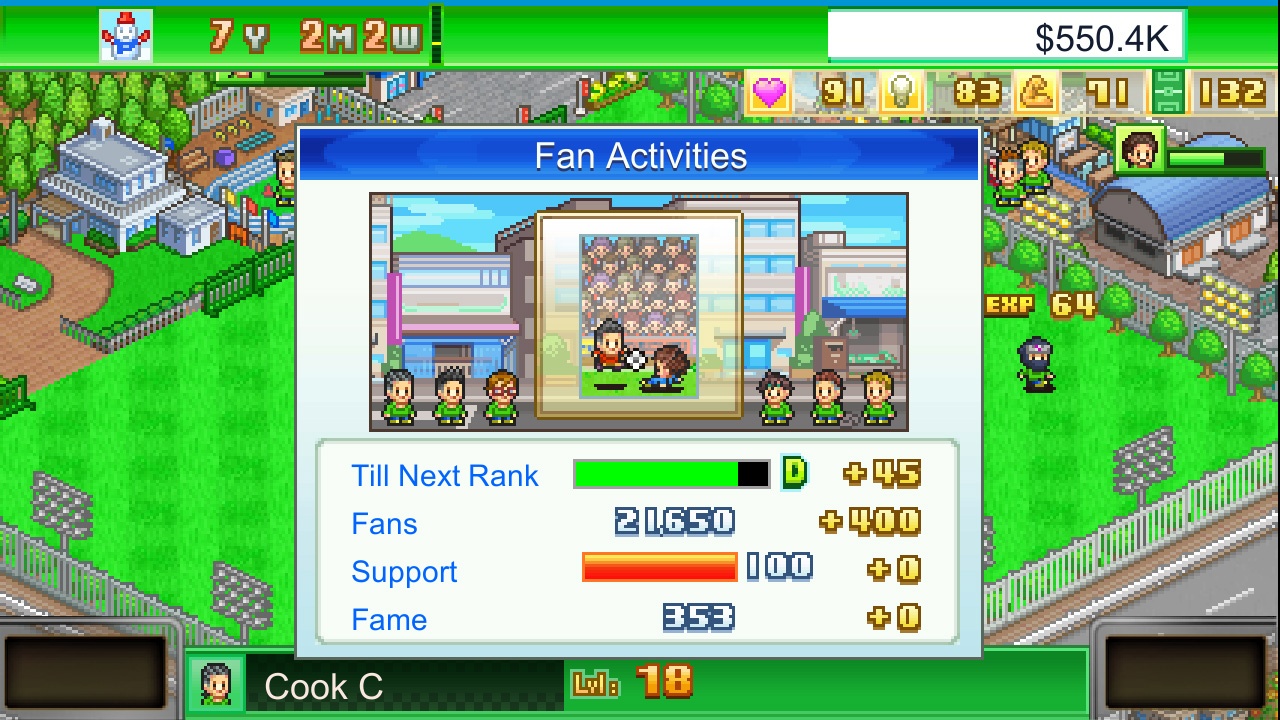 There’s a nice balance here between managing the resources of your club and producing a team that can get results on the pitch. Watching your team develop and grow is easily recognisable, allowing you to see what players need more training or what positions need bolstering. This can be achieved through unlocking higher training regimes or bringing in certain styles of players that can develop into stars of the future. From a roster of players that are available to buy, there are certain abilities that come with them, from your average player to world class and superstars; each of them affecting how quickly they can develop and change the fortunes of your club.

The overall objective of the game is to build a club that can win all the of the cups and leagues within a limited number of seasons. Should you fall short during the first time-scale, then you start the game again. However, all of the player developments that you may have made retain their statuses and levels of skill, making it easy to recruit these players back into your squad and developing them further in order to attain success at the higher echelons of the leagues. Unfortunately, though, it is also here where the game can falter slightly, as having to go through the earlier leagues can become a bit tiresome as your team easily outmatches any opponent; although when you do reach the higher leagues, the matches do become tense affairs but despite this shortcoming, it still retains the same levels of euphoria as you watch your team grow again. The audio qualities of the game can also be questionable, with an annoying and repetitive soundtrack and sound effects that are more basic than basic, but for the majority of my time playing the game, I simply turned the volume off without losing any of the appeal that the game holds.

Overall, Pocket League Story is easily one of the most accessible and enjoyable football management sims I have ever played. Its balance of challenge and ease of accessibility is simply sublime; making this an ideal entry point into the genre or a perfect game for younger players who have a healthy interest in football. However, I myself, am a big kid and still found myself drawn by the allure of its addictive premise; even punching the air with delight when my team scored that vital goal needed for victory. Its arcade style of presentation is extremely pleasing, especially on the Switch’s screen and in terms of playability, is the perfect match with Nintendo’s console. It’s an extremely addictive game and immensely satisfying to play. You really begin to develop an attachment to your club and its players as you watch them grow and develop, thanks to your managerial decisions on and off the pitch. This is easily one of the most rewarding games I have played on the Switch and comes highly recommended as another must-own title within its ever-growing library.

Pocket League Story is easily one of the most accessible and enjoyable football management sims I have ever played. Its balance of challenge and ease of accessibility is simply sublime.