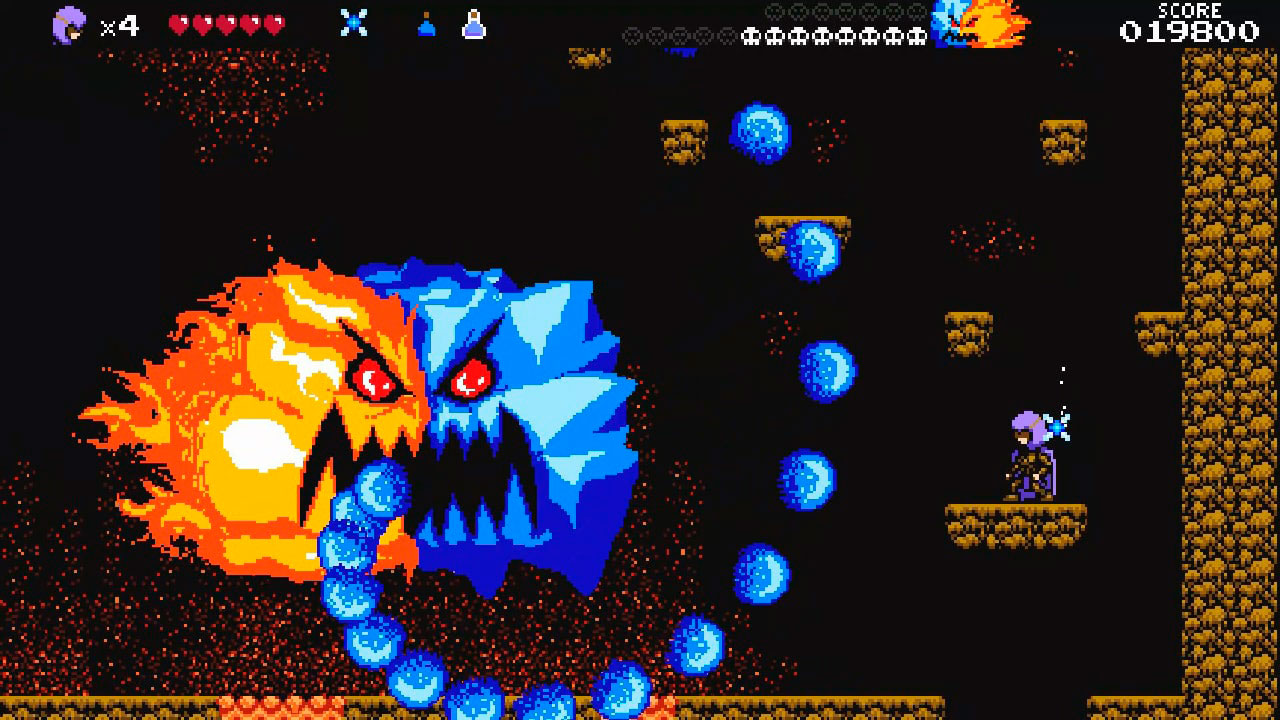 Sometimes, there is a seed that will grow out of the landfill, and it will create a beautiful flower. Other times, the seed will be crushed by the ever growing waves of garbage that make up the world around it, and no one will ever see what could have been. Without being a total dick, that occasionally feels like what the indie gaming landscape appears like nowadays. Sure, we are at a highpoint of people being able to create and publish their works without needing a huge resource of cash and connections: in theory, this should be a utopia for those who are inspired but not necessarily funded. However, there’s so much now that are blatant asset flips, knock off ideas and just shameless advertisement strawmen that it can be hard to take a genuine game from an unknown entity seriously. Things like Kickstarter should make it easier for good stuff to get pushed to the top, since they generate sales and hype, but these ideas can still land in the middle of nothing (anyone else still waiting for Project Phoenix?). So when a title is born out of a weekend-long game jam, heads to Kickstarter, gets funded by the skin of its teeth and survives long enough to make it to the Switch, I’m interested, but still cautious. And, as it turns out, I need to relax, because it’s pretty damn good.

A Hole New World is the story of a land where the Goddess who watches over all grew kind of pissed off that evil existed, because, hey, evil isn’t good. So, in a genius stroke that in no way would turn into a thing later on, the Goddess carved a second world out on the inside of the planet, inverted gravity so ceilings were floors and sealed all the bad guys away there. Since you notice there’s a game in front of you and not “nothing,” you can imagine the bad guys found a way out, and they did so by punching several holes through the world and being able to jump out and into the “good” world, resulting in, well, bad stuff happening. You, the Potion Master, are going to kick some butt and send bad guys back down to where they belong, even if that means you need to go into their world and kick their butts there. Which you do. Like, right from the very beginning, so it’s not a surprise or anything. Very soon, you’re joined by a fairy who gives you advice but also likes being thrown at bad guys as a fireball that does decent damage. Do you have the Potions needed to send the bad guys back down to the Upside Down? Answer: probably.

A Hole New World takes massive pride in the fact that it’s heavily inspired by the 8bit run and gun style of action games from the NES era, and it’s clear to see that they’ve taken care and consideration in implementation of these ideas. As the potions master, you pick up the two main ideas – run and throw potions – pretty quickly, and, truth be told, you would be fine being able to just utilize these ideas all the way to the end. However, as you move on, you’ll notice there are a lot of technical additions that are apparent in the game that make it even something greater than just a good nostalgia homage. For one, you have a lot of directional control with the potions you throw, not just forward and backwards. The degrees of hurling are more fine tuned than you might realize, giving way to some great, bold strategies in terms of jumping over an enemy and raining chemical damage down as you pass. Additionally, the fairy isn’t the only power up you receive in the course of the game. By defeating certain bosses, the Potion Master is able to start throwing completely different types of weaponry, from the original blue range potion to short distance lightning potions and even “gotta be standing on top of them” fireball potions. These are quick and easy to cycle through with the Z shoulder buttons, making the Potion Master a formidable opponent. 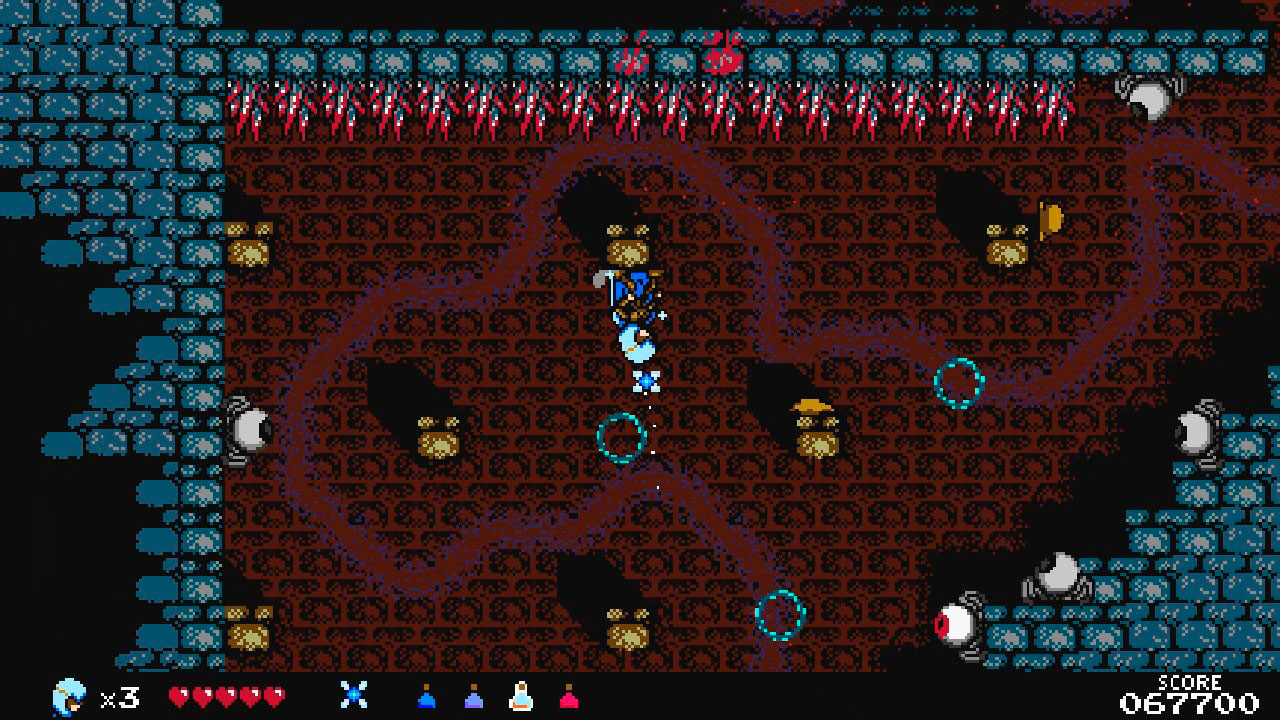 The number of enemies is certainly nothing to smirk at, as there are a wide variety of monsters, ghosts and otherwise awful things that you encounter from the very first level and only get worse as you go on. Sure, spiders can’t jump, but they can run at you with surprising speed, and the freaking yeti from the ice world are the biggest pain in the ass ever. At first, when you see the sheer amount of food that’s peppered around the landscape, you start to think the developers of A Hole New World didn’t have faith in players to be able to make it from start to finish without accidentally killing themselves, but the truth is that you need all that precious life-healing meat. The enemies don’t only live down in the Upside Down world, they’re free to pop in and out of the holes to cross between worlds same as you. Ever seen a snake just come rocketing out of a crater like it ain’t no thing? That happens a LOT. Since your weapon is primarily potions, you are really at the mercy of having good ranged skill or just being full of dumb luck in terms of jumping and striking things. This is to say nothing of the bosses, which fluctuate wildly between “Hey, I totally got this” and “Well, that”s a continue.”

Even though the concept and use of jumping into the upside down world is pretty cool, actually adjusting yourself for proper combat and orientation is less than my favorite experience. The running and jumping, sure, no problem, just gotta go with the flow of things. The actual aiming of potions, however, inverts itself with your character, and that is a damn pain in the ass. So, since you’re standing upside down, you have to aim down in order to throw a potion up at an enemy, which is bollocks. It’s something that makes sense, but it doesn’t mean I have to like it. Thankfully, you don’t have to spend a ton of time in the Netherworld as long as you’re fast, agile and can get through the game in a decent amount of time.

And the cool part is, you totally can get through the game fast if you want to. A Hole New World, constructed with modern-day gaming mechanics on top of some pretty solid pixel art, has options right off the bat to load up timers and scorekeepers for if you want to do a speedrun of the game and clock yourself. On the one hand, this is pretty cocky and presumptuous that a player will want to dedicate that level of time and effort into playing the game in such a way. On the other, this is totally the kind of game that I’d want to, and I would love to see people play this and going for world record runs by using fast tactics, cheap tricks and general finesse and memorization of the game. It’s got that level of good design and cool use of routes that it draws crowds and audiences, and I definitely would love to watch people who are far better than me play this game far better. 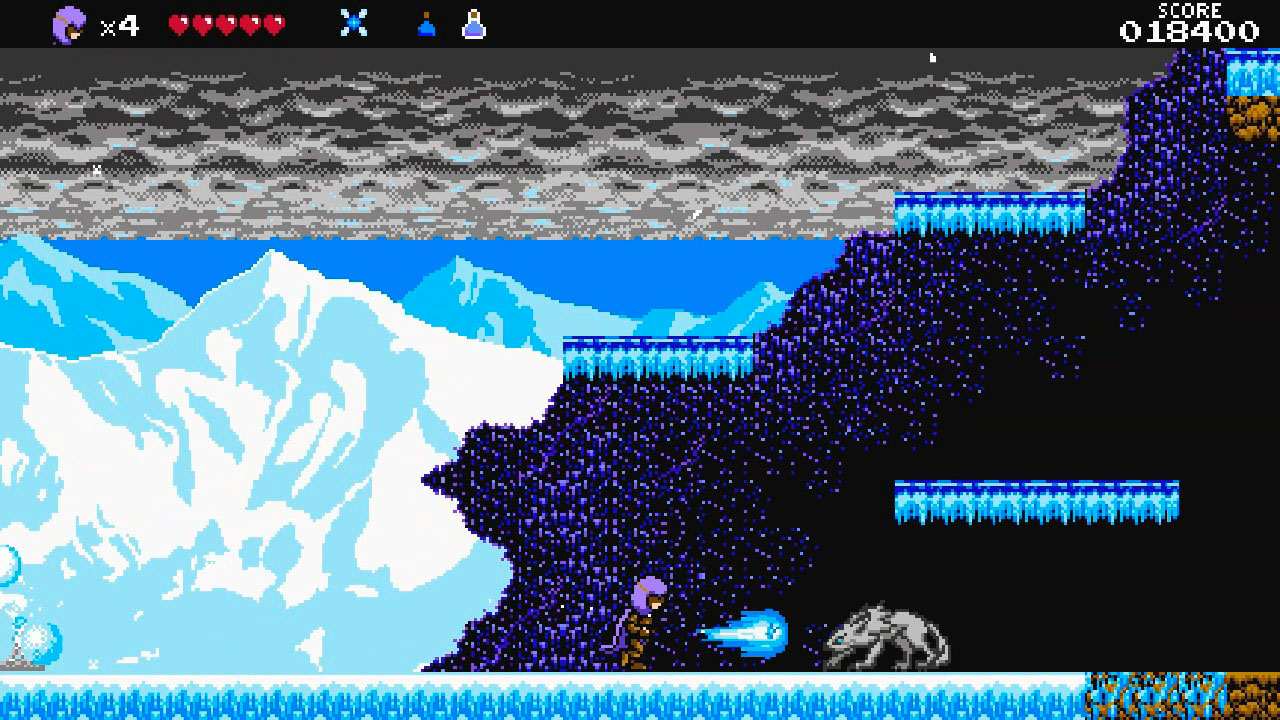 My only sadness comes from the game’s soundtracks, which are fantastic. There are two versions, the original (8-bit) and the Super Nintendo, 16-bit variation. The first is totally fitting for the game from start to finish, while the second is evocative, sweeping and actually a pretty awesome jam to listen to without the game. But I’m sad because the game missed their Zack Parrish stretch goal to get an orchestral soundtrack, and Zack’s treatment of the Valis Story is one of the best damn indie soundtracks that I’ve heard in years, easily going toe-to-toe with many JRPG scores. As a result, this is a dream deferred that I hope we can get someday in the future, because this music is beautiful and I would love to hear Zack’s interpretation of it.

Overall, A Hole New World is a great utilization of what gaming used to be combined with what gaming can be today with newer technology, algorithms and identities. It’s easy to imagine Mad Gear having successfully made this back in the heyday of the 8-bit, but I’m really glad that it was created today, because some of the more technical aspects (the wider range of aiming, the more responsive jump commands) wouldn’t have been nearly as polished and would have resulted in frustration. Instead, we have a treat that gives respect and nods to where we came from and looks ahead to where we’re going. If you’ve been a longtime Nintendo fan, you’ll find A Hole New World is the best game from your childhood that you can’t quite remember, and that’s a damn fine position to be in on the Nintendo Switch.