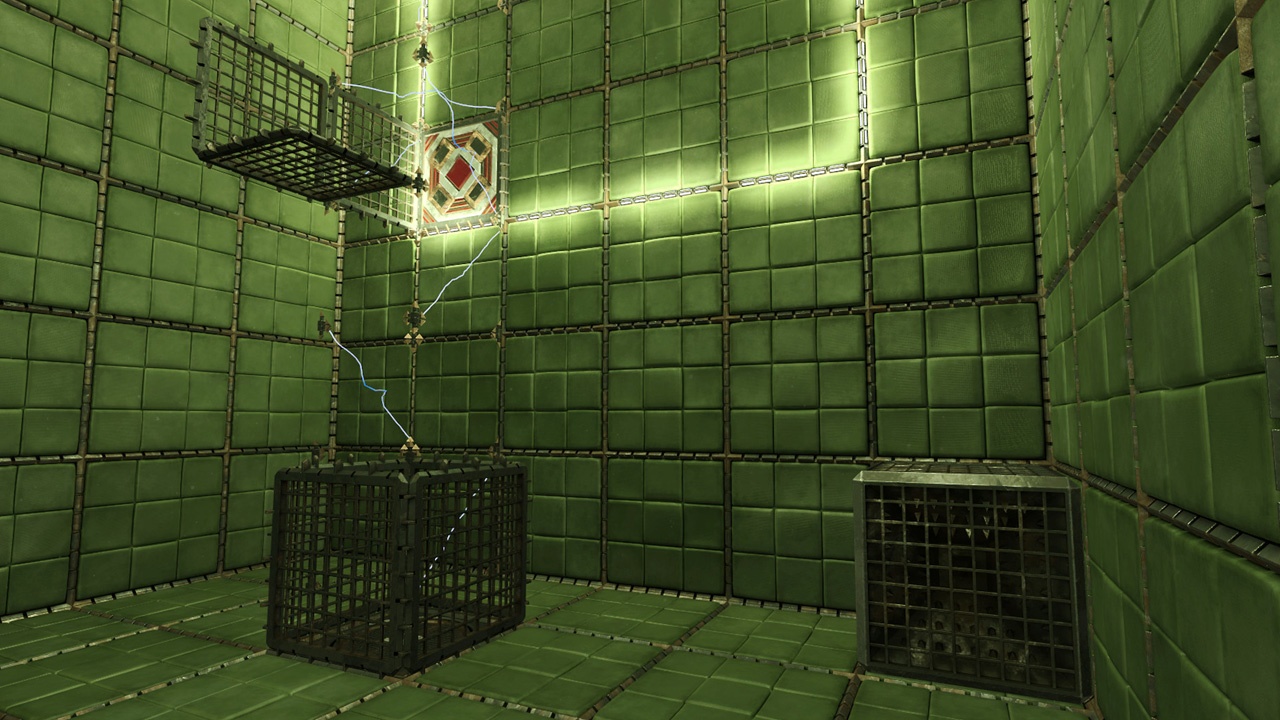 Not everything translates in explanation the way that you would like it to. Languages, for better or worse, are complex and beautiful things, and there’s no great 1:1 when it comes to certain words, ideas, phrases or even experiences. Translation and ideas also get lost when trying to bring an idea from one medium to another, and movies to games have such a sordid past. The great majority of games based on movies have been terrible, with a few standouts that surprisingly set new standards for various players. But what about when a game is clearly just inspired by a movie or other idea? Can we hold it to the same standards as something that’s officially licensed or requested? That’s a pretty strong question to levy at the indie puzzle thriller Neverout, but I think it’s a valid one given the very, very clear source of inspiration.

You wake up in a metal room with no real idea of who you are, where you are or how you got there. There are no windows, no decorations, just panels upon panels of steel and iron. You quickly find out that you can manipulate the room: walking up to a wall causes the entire room to rotate, bringing gravity into question and perspective becomes a lie. Eventually, you realize one panel is slightly different: it has a number on it, and it looks like a hatch. When you finally orient yourself to be standing beside it, unobstructed, the hatch opens and you can drop into a holding chamber, waiting only briefly before going straight into the next room. You’re trapped. But, maybe, if you can find your way through all the rooms, you just may get out. That is, as long as you can survive.

Neverout is a sixty level escape room puzzle game, in which each and every room has some kind of gimmick or mechanic to it that’s key to getting to the next level. Besides the hatch itself, various items and obstacles will show up to both help and hamper your breakout attempts. Sometimes they’ll be blocks that will be movable and absolutely essential to getting your positioning and lift correct to adjust where to go next. Others are more obvious spikes and zappy electricity that clearly state “don’t touch.” Still others are mesh metal walls that crop up at a seconds notice and can both block and act as an additional platform. In all cases, the mission statement is the same: survive and get out. If you want to think of it in a more literal sense, consider being inside a giant, industrial Rubik cube that’s also dealing with some serious homicidal urges. 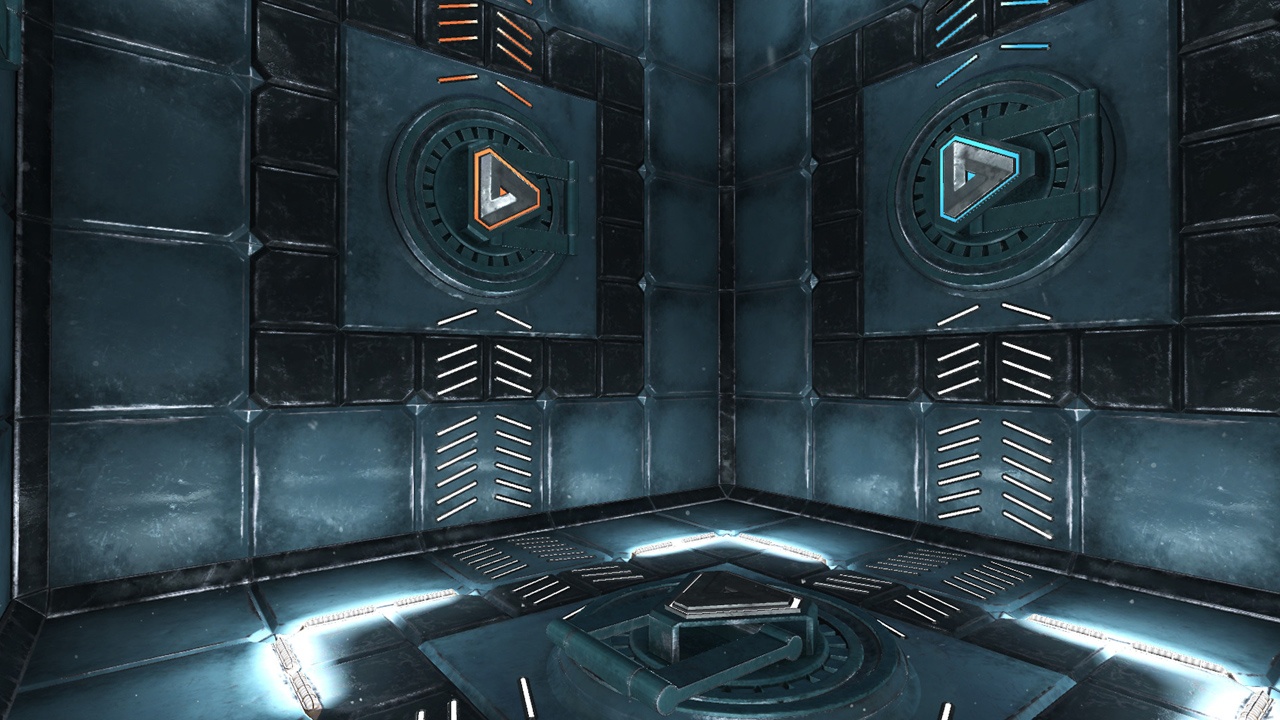 Now, Neverout really has a lot of flavor to it that comes from the classic Canadian horror film The Cube, but this isn’t a clean-cut homage. For one, you never see your character, other characters, or really have that sense of “why” that the movie creates. Sure, you’re inside a murderous puzzle house, but each room is linearly connected to the next: you have no control or chance to move to a room that is an automatic failure. Additionally, there’s just something in the atmosphere that’s missing. I can’t put my finger on it, but The Cube was always amazing at creating tension and suspense, even as the gore factor sometimes overwhelmed the thrill (and as the movies went further off the rails in the sequels). Neverout’s biggest moments of awe come from looking at the title and starting the game. After that, you kind of level out and realize that, as abhorrently difficult though it may be, the game does actually want you to escape. Each room has an exit, and it’s entirely possible to get to said exit.

Having said that, the puzzles are really a give and take for everyone involved. On the one hand, the concept is interesting: I did like the interactions with the room and the way you had to think outside of yourself in order to make successful moves. Walking in a straight line immediately stops becoming a solution, so you need to contemplate how your actions will affect your next move and what happens afterwards. You need to think about where things will be once the room shifts, if something is going to come down on your head, how close are you going to be to the deadly arcs, and so forth. And, best of all, the game doesn’t ramp up in difficulty right away: the first few rooms are underhand tosses to get you familiarized with what COULD happen, and not always what will. I really appreciated that, since there’s certainly no tutorial and the button explanations are a bit shoddy at best.

On the other hand, the almost gentle hand of menace in NeverOut turns the puzzles from heart-stopping moments of stress and timing into a bit of a droll, long-form chore. Sure, things could backfire for you, but it’s simple enough to try again, and most of the time you just have to rely on trial and error. Instead of worrying a lot about beating the clock, you’re more concerned about the real world timer going off where you need to cook dinner or get to class and you’re not totally sure if you’ll remember what you were doing when you finally get back from your aforementioned commitment. Thankfully (or not?) none of the rooms felt terribly complex, and even the last couple of rooms almost seem to nudge you towards your solution with a motherly air, trying to get you to finish in time for watching Gilligan’s Island (I need a more modern reference). Once the idea of what you need to do clicks, you’ll find yourself rocketing through the rooms, easily finishing the game in well under three hours. Maybe less if you don’t suffer from crippling FP nausea. 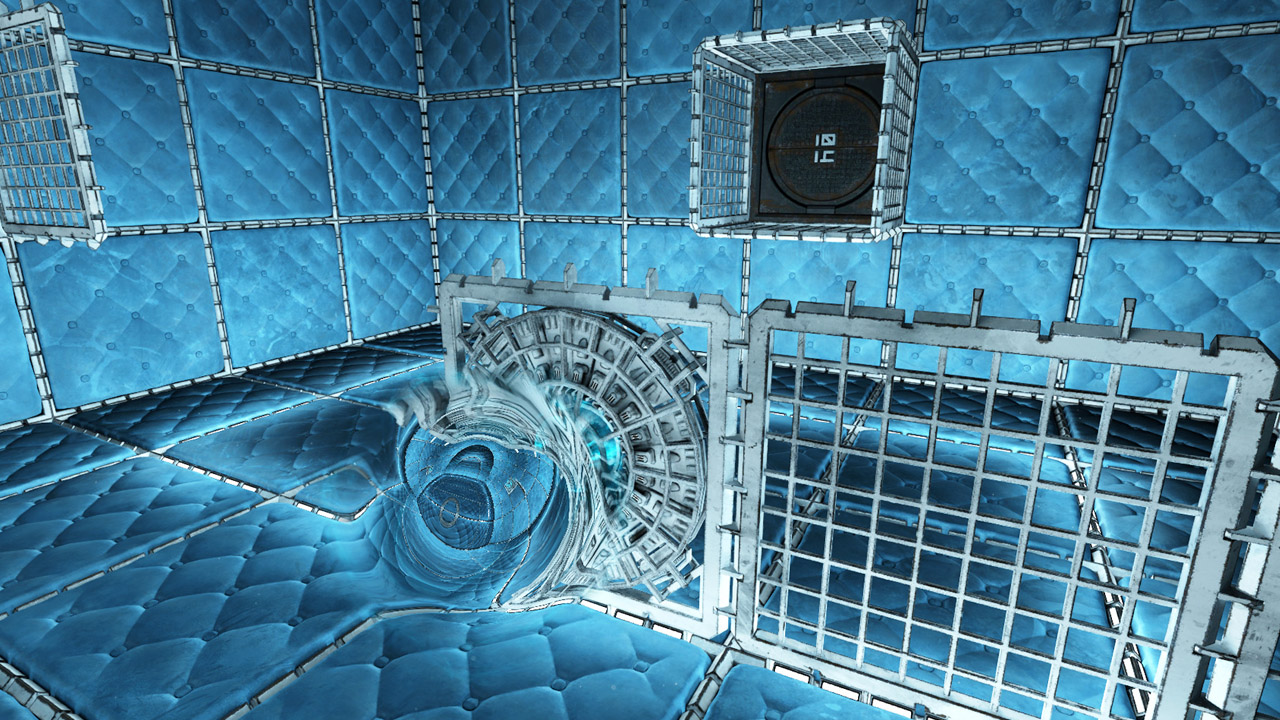 Ah yea, the first person aesthetic and port of Neverout to the Switch. Part of me gets it: games that do well on the Occulus might do well on Nintendo’s indie machine because players are more apt to try new things. But there are a lot of problems with this mentality. Firstly, nothing about it feels remotely unique to the Switch, and you can easily picture doing this game in a VR helmet, on a normal monitor, or even watching someone else do it on their smart phone. Additionally, the movements can be a bit choppy: due to design, there’s no middling ground for where you can move. Your orientation has to be blocky and aligned with the floor just as if you yourself were part of the grid. And the whole thing just smacks of depth perception issues and monstrous camera changes that left me grabbing for the Dramamine at 9:30 in the morning.

All in all, there’s some cleverness to Neverout, and it’s a nice breakup of puzzle games that feel more traditional. The concept is interesting, and I hope the developers decide to do some kind of Director’s Cut with commentary or a back story, because I feel that’d be fascinating. On the other hand, only people absolutely smitten with the framing or with puzzles in general will want to revisit this title, and I personally don’t think there’s enough Seabands in the world to keep me coming back for more. By all means, give this dark little puzzler a go, but don’t expect to have the same kind of thrill that you get from the inspirational movies.