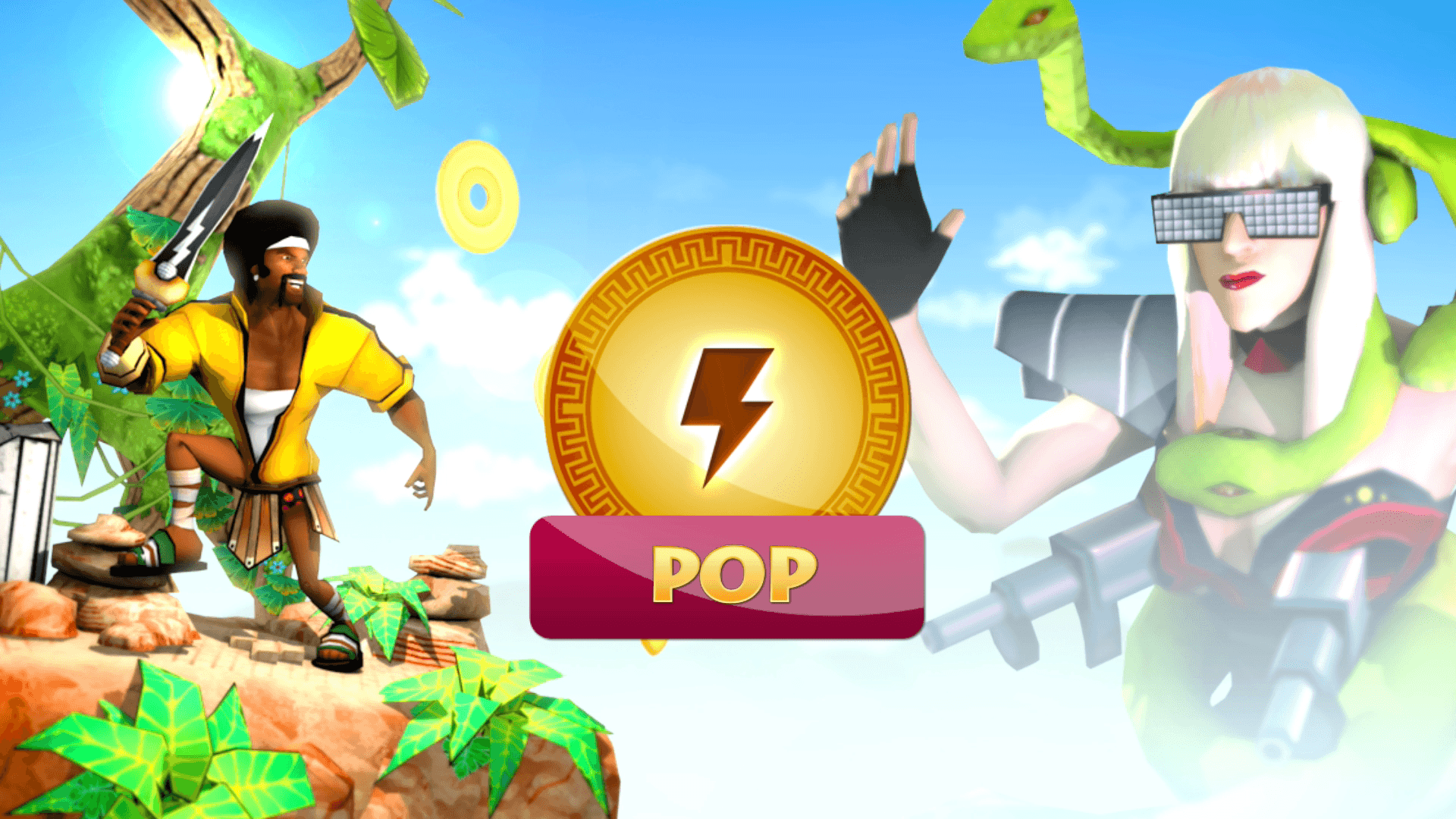 Funk of Titans is a free running game set in a rather warped version of ancient Greece, available now for the WiiU, Xbox One and mobile platforms. This game parodies the legendary myths of ancient Greece by giving the story a 70s funk theme. Zeus (who resembles Samuel L. Jackson in the remake of Shaft) is having problems with titans wreaking havoc in Greece. To combat these titans he has created a warrior son named Perseus (think of a young James Brown / Bootsy Collins style figure) to free run across the land and do battle with the titans. The game is split into three worlds titled ‘Pop’, ‘Rap’ and ‘Rock’, each containing a titan to defeat. Although you may back track to earlier stages have to beat the three worlds in order.

When I first started the game I was initially disappointed. From its trailer I assumed that this was a relatively straight forward platform game, however Perseus will run forward constantly at a consistent speed. You have no control over his direction which renders the D pad and analogue sticks as useless. Instead you play the majority of this game using only two inputs. The A button to jump / wall jump and all the other face buttons perform the same melee attack. It was obvious at this point that this was a game designed for mobiles and not consoles.

There are about 40 free running stages and they are all very similar in structure. You run through a stage tackling a small variety of enemy soldiers as well as obstacles such as flames, cannons, swings, switches, springs etc. Stages usually have multiple paths so you have to keep an eye up ahead for situations where the road may split. For example there are some enemies you can jump on in order to bounce a bit higher than a regular jump. If you see such an enemy up ahead your first reaction may be to hit it with your sword, however doing so will prevent you from taking the higher path.

Each stage has 100 gold records to collect plus 3 bonus records. In order to score 100% and get all of the achievements you have to take the correct path on each level and grab all of these records. Some stages have doors that can only be broken with specific weapons so if you are aiming to beat this game completely you will need to purchase some alternative weapons from the store using the in-game currency (the records you collect along the way). Most weapons are not available straight away so you need to keep an eye on the tasks that Zeus will set you in order to level up and unlock more items. These tasks are relatively straight forward and are usually unlocked by simply playing the game normally or just grinding away at the stages.

In addition to the free running stages each world contains a mini boss known as a grunt who you battle in a wrestling ring and a final boss which will be one of the titans that you dance off with in a nightclub. These battles take place by responding to quick time events. Button prompts appear on-screen and you have to respond accordingly. These stages are incredibly easy and require no skill whatsoever. The dance off battles reminded me a bit of ‘Parappa The Rapper’ only with no rhythm required. You simply have to press the correct buttons as they appear and you’ll score well every time. 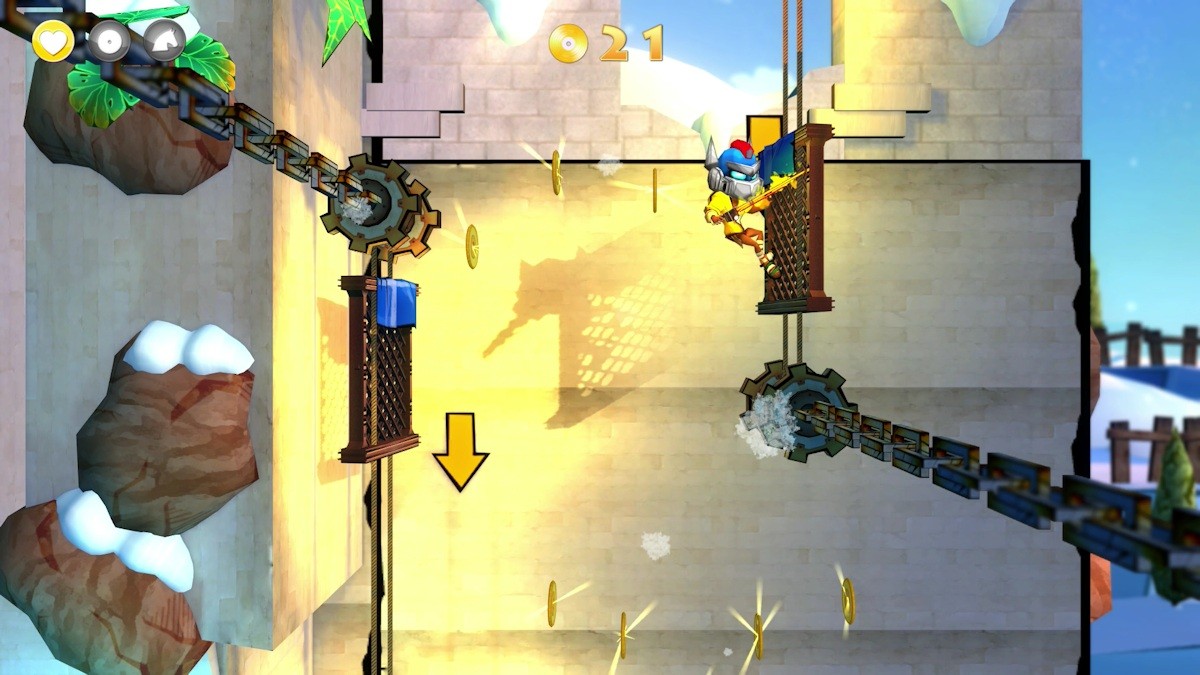 The titans are a mix between a mythical creature and a modern-day music icon. Medusa (the ‘Pop’ titan) resembles Lady Gaga with a machine gun bra which is reminiscent of something Madonna or Katy Perry would wear. The Rock titan is a centaur that looks similar to Axl Rose and the Rap titan… well I can’t work out who the hell he was supposed to be.

The game is very user-friendly in its simplicity. There is only one save file, the map is easy to navigate and the simple controls should make it easy for gamers of all ages and abilities to just pick up and play. Note that on the WiiU this game is only compatible with the WiiU Game Pad and not any of the other controller types. When playing on the TV the game pad screen remains black which is probably to save on battery.

As far as presentation goes the graphics here are OK for an indie studio. I certainly would expect better if this was from a major game company as these graphics look around the PS2 / GameCube standard which is about what I expect from an indie. The game is nice, bright and colourful although some stages do look a little cluttered at times. The game plays from a sidescrolling 2D perspective but uses 3D models that look a little jagged. A few of the stages actually attempt a minimalist style and look a bit like the sunset stages from ‘Donkey Kong Country Returns’. These stages looked particularly nice, with many of the foreground objects blacked out in darkness with minimal detail, offset by a bright and vibrant sunset background. It’s a stunning effect.

Unfortunately for a game that uses musical genres as a theme there is very little to say about the music. A lot of the tracks are constantly reused, they all sound a bit stock, there was little variety in the styles and overall I found the sound in this game to be very underwhelming. I wouldn’t blame anyone for sticking a podcast or a radio show on while playing as you wouldn’t miss anything. 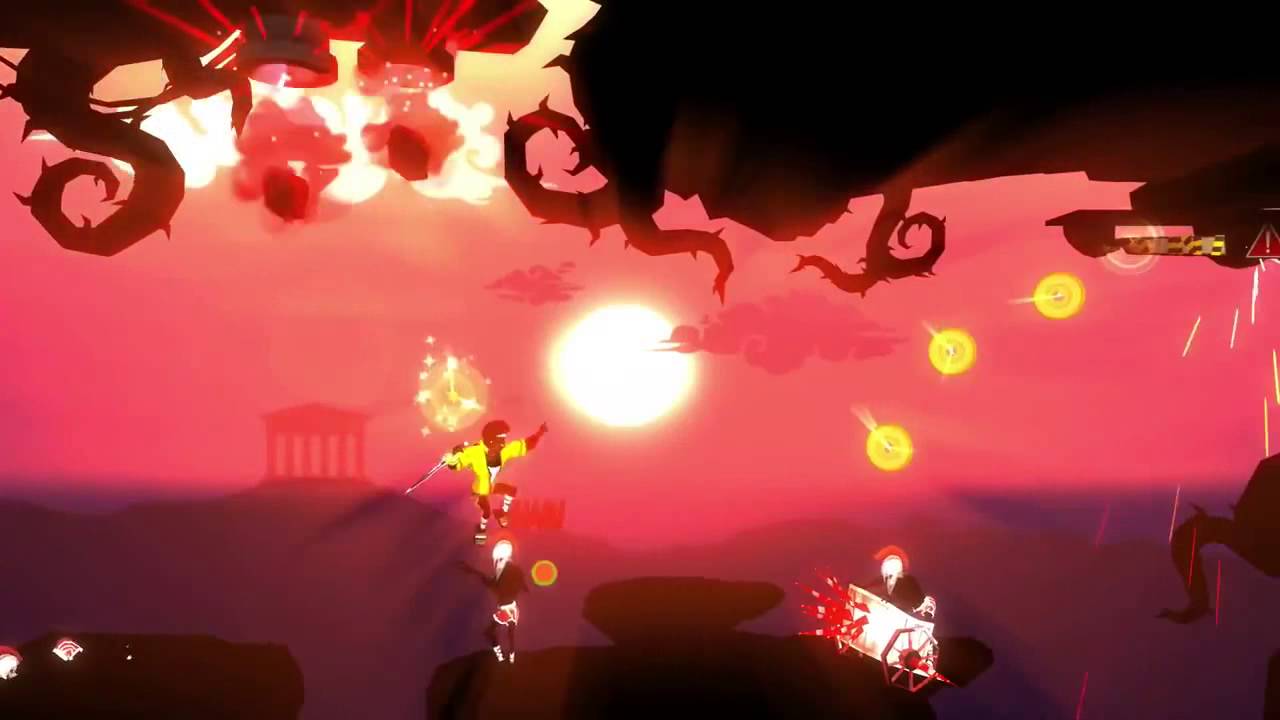 From a technical standpoint the game has few flaws and is stable as far as I can tell. The game is short but in all the time I played it I didn’t encounter and crashes, bugs or glitches. There was one point where I died and the camera panned down to reveal that the water running underneath the stage stopped dead at a certain point, so clearly I was viewing part of the map that I wasn’t supposed to but that’s a bit of a nit pick overall. One thing I did notice when I began playing was that the way the game scrolled appeared to be a bit jerky, leading me to believe that this game may run slightly under 30fps. After playing for a while I didn’t notice so either my eyes adapted or the game started running smoother. Even the end credits didn’t seem very smooth as they scrolled up the screen.

In conclusion I found ‘Funk of Titans’ to be very underwhelming. I was entertained at first by the premise, style and attitude, but as soon as I learned that this was essentially a mobile game ported to console my interest plummeted. If it wasn’t for the fact that I was reviewing it I’d have switched it off after two levels. The game is very easy and I really didn’t find it to be very engaging

Overall I’d say this game is around 2 hours long, possibly double if you’re aiming for 100% completion. If I was playing this on a mobile I’d say it scored around average (maybe a little less than average). However considering I was playing on a WiiU which has a huge catalogue of fully fledged platform games (including classic Nintendo titles like ‘Super Mario World’ and ‘Super Metroid’, in addition to modern indies such as ‘Shovel Knight’ and ‘Shantae’), I’m afraid ‘Funk of Titans’ can’t even begin to complete in this market. It currently retails at $8.99 in America and Europe / £8.09 in the UK, which in my opinion really isn’t worth paying for this.