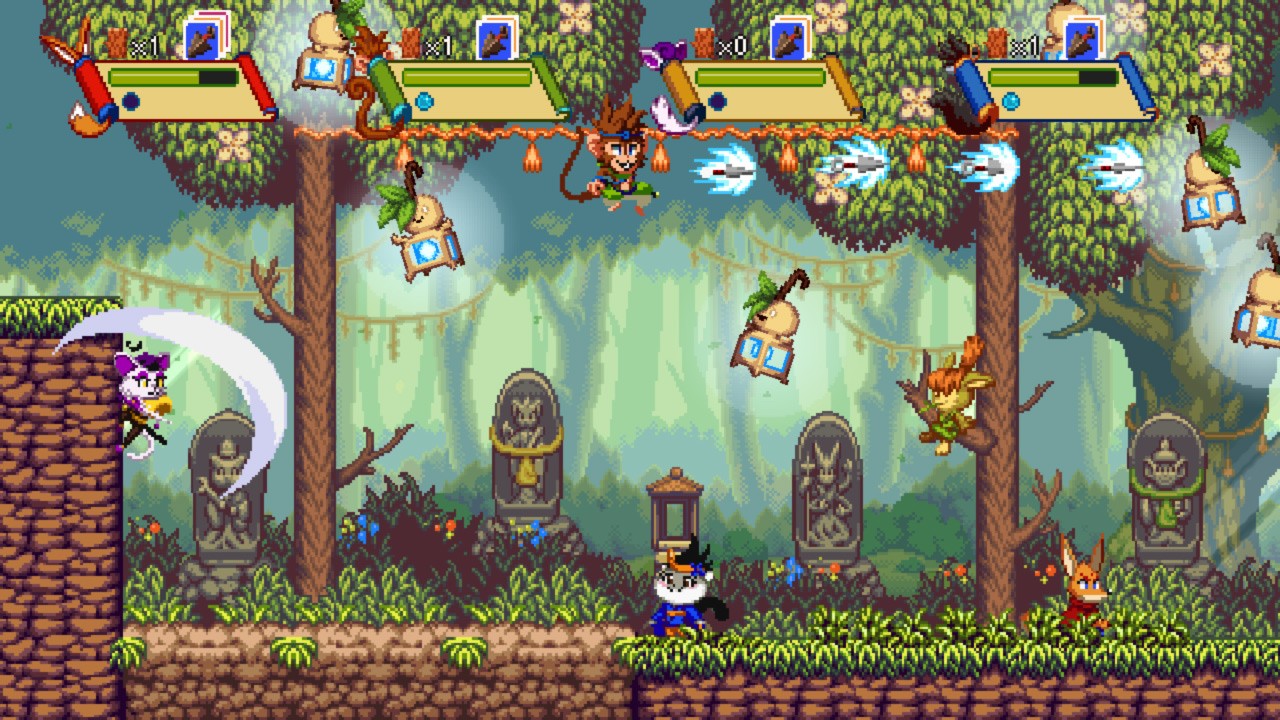 There isn’t a better kind of folktale out there than a Japanese folktale, and I stand by those words very strongly. From the familiar, historically accurate Tales of Genji to the bizarre and fanciful world that is yokai, these are concepts awash in magical beasts, ancient wizards and a pantheon of Gods that could rival Greek mythology. So it makes sense to set video games across this colorful backdrop, right? It’s been happening for years as it is: even before modern consoles, the SNES had greats like Pocky and Rocky, and the NES had Youkai Yashiki (and, to a lesser extent, Kabuki Fighter, but that’s less mythic). NIS America saw a great opening on the Switch and decided to patch it by introducing a title that was equal parts cooperative brawler, directional platformer and visually engaging adventure. The result, Kemono Heroes, is a great bit of fun packed into a colorful, exciting and replayable package.

The backdrop of the game is simple, if potent. With Kemono Heroes, the Moon God is being a pain, which tracks with a lot of other stories in the mythology. Perched atop Mount Fuji, he’s decided to turn everyone to stone and also try and murder you, the hero. Naturally, you’re not okay with this (really, any of it), so you and the group of friends you might bring with you are off to kick butt. You are, thankfully, well equipped to approach the task, so you grab your trusty sword, your throwing kunai, and head off to stomp across multiple levels, terrains and mini bosses to set things right and make life better for everyone. I mean, except the Moon God. He’s in for a world of pain. 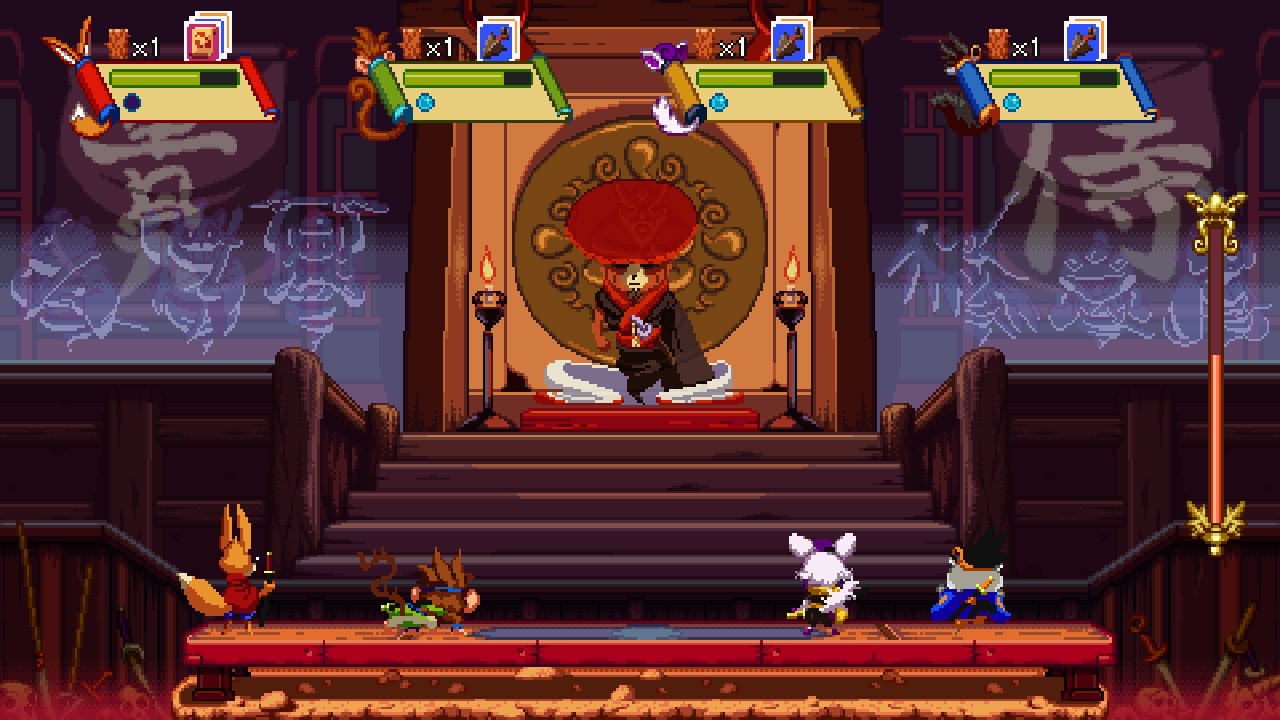 As mentioned above, Kemono Heroes is a brawler and asks you to jump, walk and dash across many, many levels, full of enemies, traps and different sorts of platforms. You have three initial attacks to think about: melee, range and single-use screen cleaner. As you progress through the game, you unlock additional elements and attacks, such as a grappling hook to reach other platforms or bombs to both attack and blast through interfering platforms. You will be beset by enemies from every single angle, air and underground, and you gotta wack the hell out of them to prevent them from murdering you. As you beat them up, they’ll drop a ton of coins that you’ll need to power up and recharge at the conclusion of most of the stages (a little shop appears and you can buy things). Also, you’ll hit one mini boss per area, culminating in fighting against the big moon boss himself at the very end, and I think you can pretty much understand what to do here. Move forward, beat up a bunch of bad guys, get coins, enjoy.

This is a fun game, pure and simple. Kemono Heroes isn’t reinventing the wheel with anything they’re doing, so it’s important to know there’s a lot of polish in what goes into it. The music and graphics are fantastically atmospheric, with plenty of older enka-style tunes to put you into the mindset of setting off on a grand, mythic adventure. The enemy designs give you a lot of different monsters, from things like the Nue and the classic ghost-animated umbrellas to tons of bigger baddies, including ghost tanukis and Tengus that really want to murder your face off. Each of the heroes you can play as have the same basic skills, so you can play as a monkey or a cat and have the same effect: just pick who you want and be happy. You get to traipse across temples, forests, mountains and several other locales on your way, and the entire journey is really a lot of fun to drink in visually and enjoy.

The heroes of Kemono Heroes have been fine tuned with their actions and reactions, making sure the buttons and controls are tight with everything you do. Players can gradually expand their understanding, with the different abilities getting unlocked over the course of the game so that it’s not too easy (with everything available at the start) or too hard (some of the levels would be impossible without the new abilities). The game works exceptionally well with multiple players, letting you jump around and deal with the multiple-monsters without clipping into each other or stepping on each other’s toes. The number of coins dropped, even in single player, is completely insane and is important due to the cost of most upgrades being in the thousands (and the highest coin being worth 100). You want to grind up the coins each and every level, as the upgrades to your weapons are incremental and you want to grab them each time they’re available. Nothing quite like getting insanely powerful before reaching the next boss and then ganging up on them with your friends. 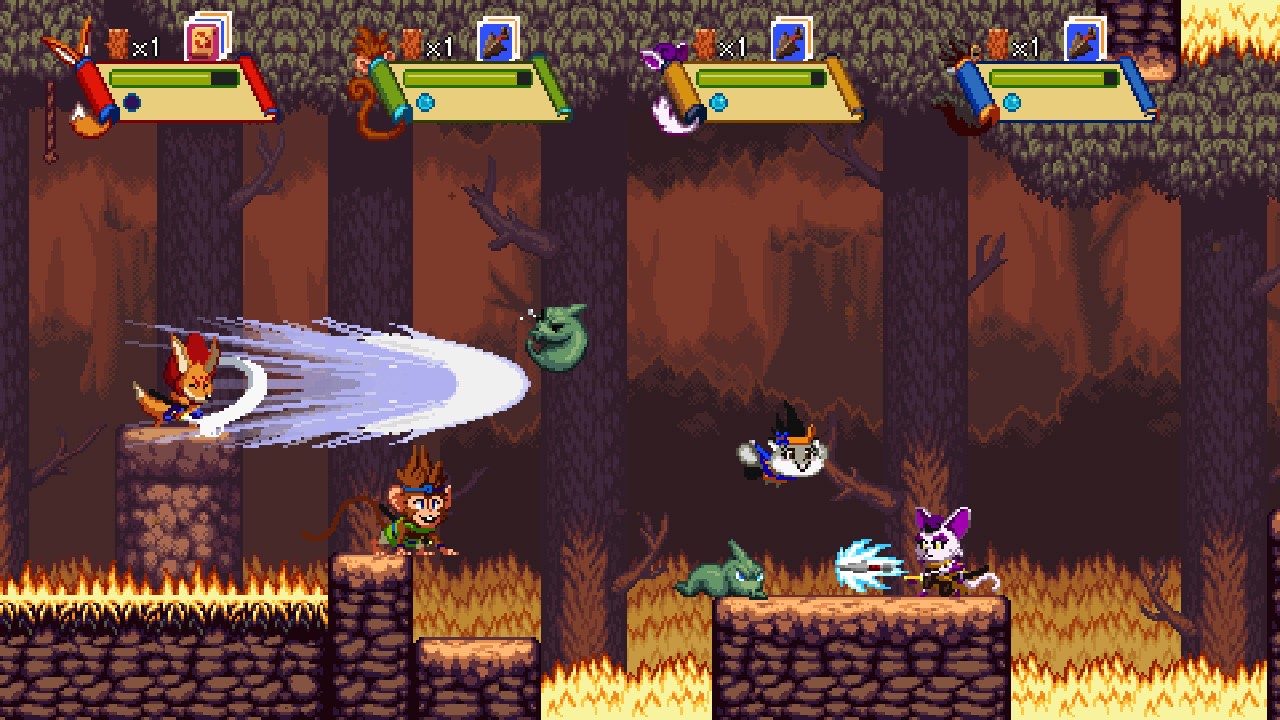 However, there is one gripe about Kemono Heroes that should be addressed: the difficulty level. If you want the game to present absolutely any challenge, you need to start with normal solo and hard in co-op, because the easy level is just a goddamn embarrassment. The first level is a little challenging, and everything after that is positively a sleepwalk. Once your weapons are at level 2, you defeat everything with a couple hits. The throwing weapon turns into a spray cannon that changes the game from a brawler into a twinstick shooter, the whole game losing meaning and drive as you blast through wave after wave of enemies before even seeing them, The screen clearing limited strike can be recharged by buying new refills between stages or, honestly, watching them get dropped endlessly from every fifth enemy or so. You can use this limited attack to defeat the bosses without even actually engaging with them. It’s kind of fun, at least in the “be the God amongst the Gods” sort of way, but it can get old.

Yet that same idea is deeply fun with other players. Heck, get into easy mode with other Kemono Heroes and see how fast you can brutalize the Moon God. Get into the higher echelons and prove to yourself and your friends how much you can conquer and defeat these endless, unique and cleanly created monsters. There is a bit of slowdown, I have to warn everyone. When there’s too much going on the screen, especially with the throwing weapons, you’re going to watch the whole package slow to a crawl (which is sadly a recurring theme in some NIS America games). But, 9 times outta ten, you can bust through the cluster and make the game get back to buttery smoothness in a limited amount of wait. Plus, it’s like watching an anime unfold on screen before you as up to four heroes congregate and banish monsters in droves, and you get to be a part of it.

That’s the wonder of it all. Kemono Heroes has the heart and the talent, and delivers in the tone throughout and how the game plays for people, how it can be enjoyed and picked up by almost anyone. It’s not a kids game where dad carries two other players all the way through (as we found out), but it’s a good challenge for those familiar with platforming mechanics (don’t miss the clouds, falling blocks, etc.) and not a bad intro for those ready to try something for the first time. It’s genuinely fun, and I can’t always say that about all games. C’mon, don’t you want to be a monkey hero? Goodness knows I do.

If you’re ready to beat the hell out of tusked demons and hide from a malevolent moon, then come join the ranks of Kemono Heroes!