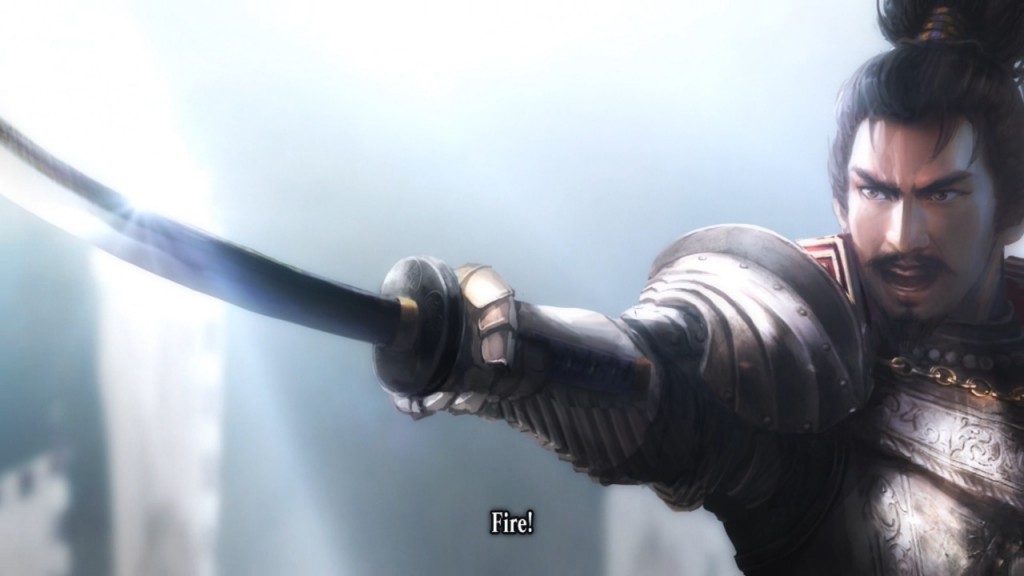 Despite being around since way back in 1983 and showing up on the majority of major consoles at one time or another in the past 30 something years, I had never actually heard of Koei Tecmo’s turn-based strategy series until Nobunaga’s Ambition: Sphere of Influence was announced for PlayStation 4. An exhaustive strategy game by console standards, Koei’s return to the Sengoku period of feudal Japan might be initially overwhelming to console owners used to more easily accessible fare, but for those willing to stick with the complex tutorials and slightly compromised control scheme (this is a strategy game on a home console after all), one of the deepest, most rewarding strategy games to ever grace a console awaits.

Those new to strategy games will need to be patient (I certainly had to be), but if you’ve ever had any interest in taking on a fully featured strategy game but have never had the PC to pull it off, this might well be the game for you. This isn’t the admittedly successful middle ground of a made for console, Halo Wars, no, this is the real deal with enough depth to sink a battleship. And while no battleships are likely to be sunk in your conquest of Japan and ultimate aim of glorious unification, there will certainly be plenty of blood spilt in your ongoing campaign for geographical supremacy.

Split essentially into two parts, the ‘council phase’ and the ‘active phase’, the closest thing I can think of by comparison is, bizarrely enough, Football Manager. You essentially set-up your forces in the council phase by putting your core strategy in place before the active phase in which you actually go into battle. It’s not as hands off as an actual match of Football Manager, but there is certainly an element of doing the hard work beforehand and then seeing how it plays out once you put your men out on the field. Of course, you can issue new orders on the go, and again, like Football Manager, speed up time if you feel that you’ve done all that you can, but either way, whether you like to step away from the action once the battle commences or prefer to get involved in a much more hands on way and provide detailed instructions as the battle rages around you, Nobunaga’s Ambition: Sphere of Influence always gives you the power and the ability to approach just about every aspect of the game in way that you see fit. 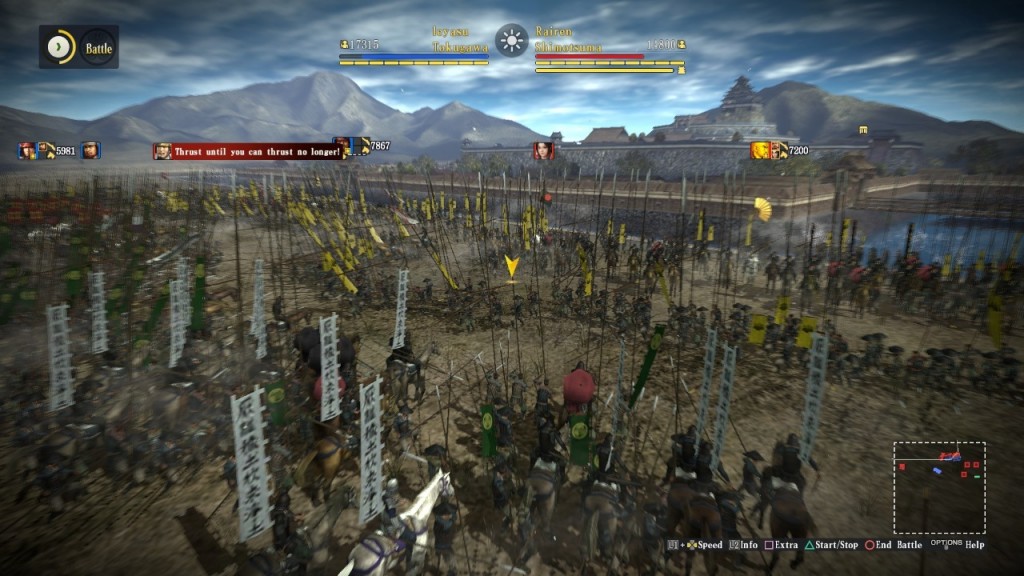 And that truly is the games’ greatest strength – the sheer wealth of options and the almost bewildering level of freedom both before and during battle is absolutely mind-boggling, and while that does inevitably add to the games’ unsurprisingly steep learning curve, it also ensures that those who commit to learning its array of systems are handsomely rewarded with a fantastic strategy game that encourages intellectual thinking and both long-term and short-term approaches to warfare. Whether it be the in-depth control of individual troops or consorting with other clans and building larger-scale alliances behind the scenes, the latest entry on the long running, Nobunaga series allows for tactical control on just about every level.

Control on the field can be a little cumbersome due to the use of a PS4 controller, but for the most part, controlling active battles is a relatively stress free affair….from a technical perspective anyway. Of course, attempting to control an army and take control of an entire country has its fair share of stressful moments, but at least you don’t spend the majority of your time wrestling with the controls and interface. Selecting individual units is simple enough with the ability to input specific unit or officer commands also proving relatively straightforward. Planning an attack is one thing, but it’s always rewarding to take control of a specific proportion of the battlefield and make tactical changes on the fly – seeing your men successfully take out an enemy unit via a well-timed and well placed flanking command is an often incredibly rewarding experience.

Honestly though, as good as the game might be during battle (and it is very good indeed), it was during the council phase that I often had the most fun. Planning my strategy for battle, ensuring that my agricultural sectors were in good order, building up my gold reserves and nurturing relationships with rival clans, it’s all great stuff and is basically a game unto itself. Sphere of Influence is as much about building diplomatic relationships and it is destroying opposing armies with underhanded tactics and carefully crafted alliances proving just as important as your tactical decisions out on the battlefield. Still, if micro-management and diplomatic affairs aren’t your thing, you’ll be glad to hear that you can palm off all that talky business to the an AI council, leaving you to deal with the more immediate war-based tomfoolery out on the battlefield. Koei have seemingly bent over backwards to ensure that you can approach the game in any way you see fit – from top to bottom, Sphere of Influence allows you to manage your experience at every turn and thus create the exact strategy experience that you are comfortable with.

With 12 scenarios, the majority based upon historical events with a few fictional campaigns thrown in for good measure, Nobunaga’s Ambition: Sphere of Influence certainly isn’t short of content. Whichever way you approach the game, you’re looking at a potentially epic time sink with new players requiring additional time to get to grips with its vast array of systems and options. The tutorial is very useful, but be warned, it’s pretty dense stuff right from the off, delivering a mountain of information before essentially dropping you into battle and letting you get on with things. Pop up information continues to help you along the way, but the learning curve is steep, so be prepared for plenty of reading straight from the off. 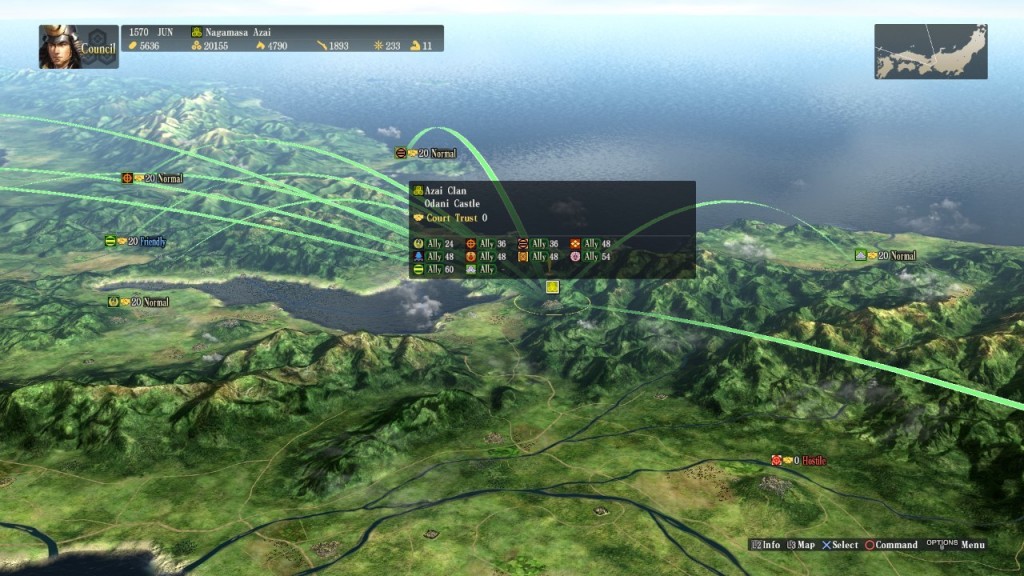 Speaking of reading, you’ll be doing quite a bit in this game (especially if you go hands on with the diplomatic stuff). There is some voice work, but for the most part, this is a relatively simplistic experience from an audio/visual perspective. The majority of communication comes via static screens while the battlefield, although functional, isn’t going to push your PS4 in any meaningful way. It all does the trick, but again, for those used to a little more in the way of visual fireworks, Sphere of Influence’s functional visual style might come as an initial disappointment.

Still, despite the slightly underwhelming visuals and the rather brutal initial learning curve, Nobunaga’s Ambition: Sphere of Influence is an otherwise unmitigated success and fine example of how the strategy genre has the potential to strive on home consoles. It isn’t as user-friendly as something like, Halo Wars, but for those willing to learn the ropes, it’s a game that offers an immense level of control over both your individual actions and the level of ultimate involvement that you are comfortable with. Whether you be a diplomatic genius, a tactical mastermind or both, Sphere of Influence encourages you to play to your strengths while giving you the option to take on just about every conceivable aspect of warfare. The setting is fantastic, the stories compelling and the quest for unification incredibly addictive. Strategy games will never be a perfect fit for home consoles, but if nothing else, Nobunaga’s Ambition: Sphere of Influence proves that even the deepest of strategy games can work on the PlayStation 4.