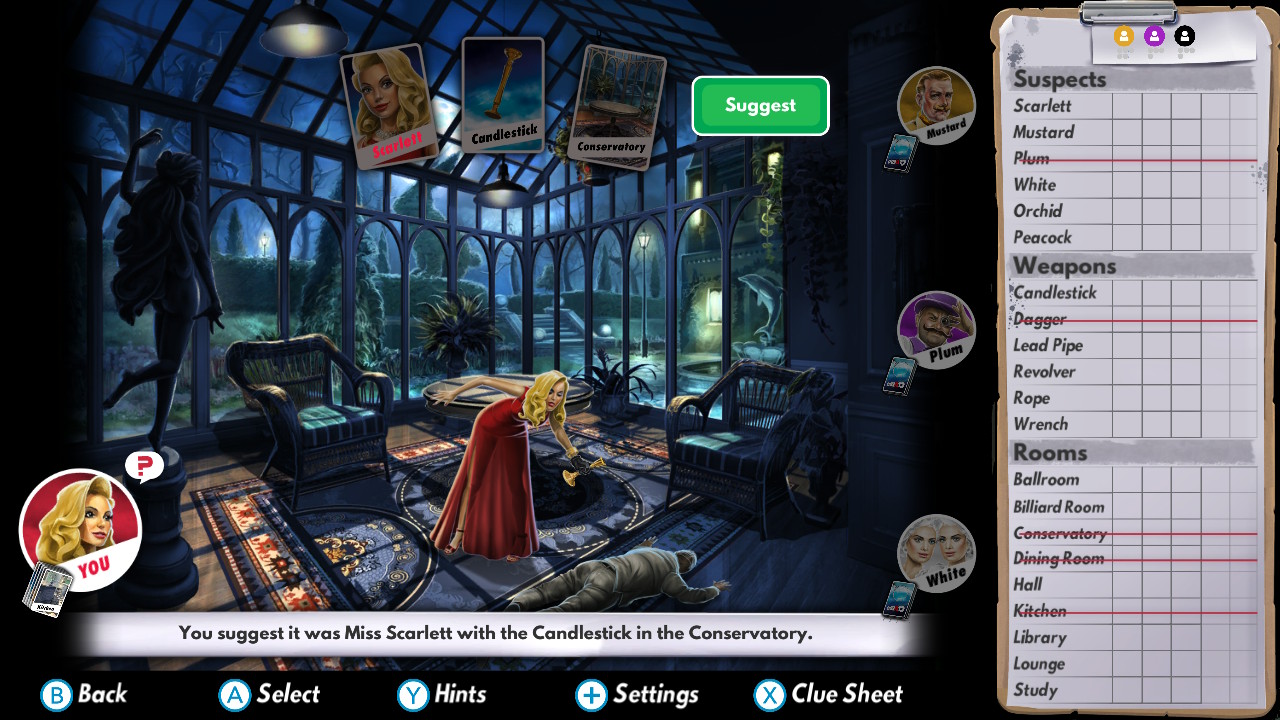 It has to be said that the main allure for playing board games has to be the fact that you can play around a table, or on the floor, with friends and family as you all play and interact together. The same can also be said for video games too with its capabilities of local and online play, as well as chat lobbies. However, where you can play video games as a solo player, the same can’t be said for the more physical versions of a game. After all, playing chess or monopoly is simply a boring affair when playing alone. The transition from physical to digital, in regards to board games, is largely a successful formula thanks to modern gaming’s multiplayer capacities and the latest of such iterations to get a release on the Nintendo Switch comes in the form Hasbro’s classic game which has been developed by Marmalade Game Studios, Cluedo.

If there was ever a board game that would transition perfectly to a digital format, then it simply has to be Cluedo. Its sleuthing premise of deduction and working out the killer is a perfect match for video gaming. In this regard, Cluedo on the switch is a perfect recreation of the board game, even surpassing its physical brethren in many ways. However, in other aspects, this digital version of the game falls by the wayside; mainly in its lack of any local multiplayer support, which is a murderous omission from a game that works best when played with others. Saying that though, you can obviously play against AI controlled characters and you can also play online with friends and randoms, making the missing local multiplayer all the more puzzling. 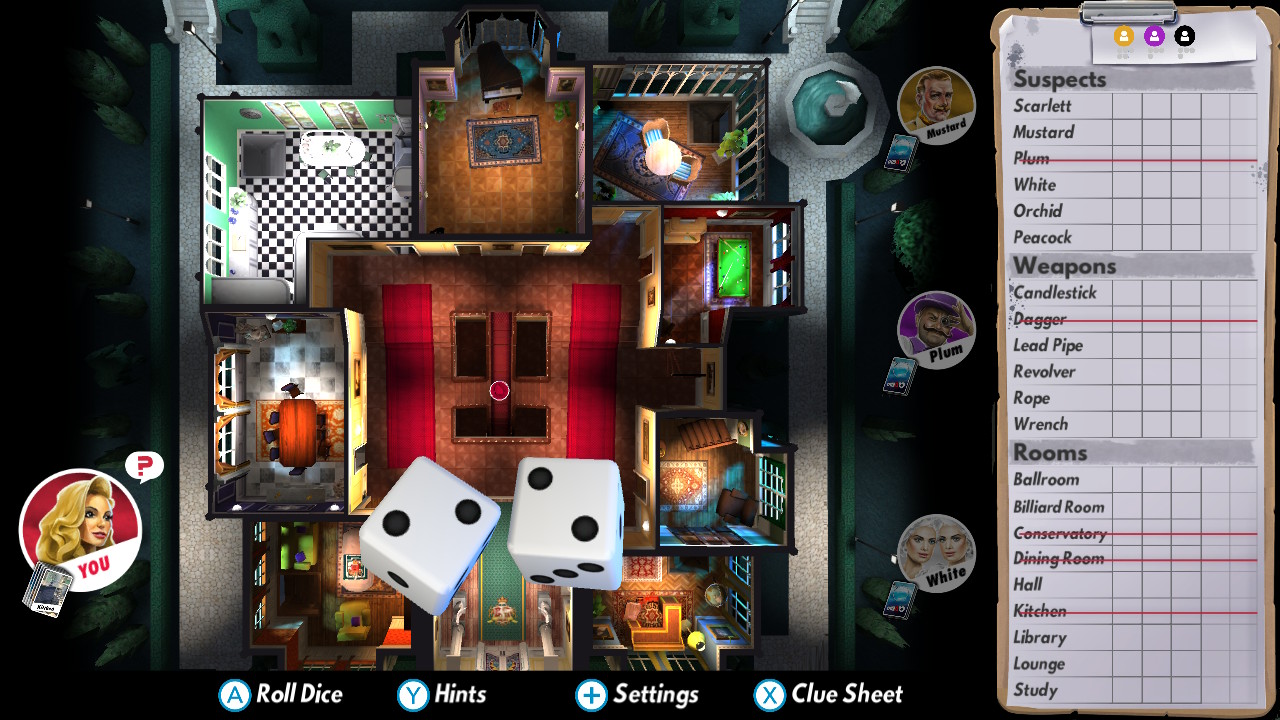 Whether you play alone or over the net, each of the modes are sublimely presented and executed. For a digital recreation of the board game, Cluedo plays a perfect game. It even contains a variety of locales and settings, as well as a variation on characters, bringing an eclectic mix that helps to bring a freshness to the game. The general premise of the game remains the same as the original version. Playing against five other opponents, you seek out a series of clues that point to the perpetrator of a recent murder. By rolling the dice, you move around the environment searching the clues and using an element of logic to work out the murderer before everyone else. This is done through a series of cards that contain character and weapon profiles, as well as a handy check list that can be interacted with at any time to work out a conclusion.

Despite its lack of local play, the solo element of the game does actually perform very well and is quite fun to play; it just simply doesn’t match being able to play with everyone else who may be in the room with you at the time. Its variants on locales and characters add an interesting twist on the original, with more DLC coming in future to further expand on the variety on offer here. However, playing these types of games are simply better when played with other people. To cater for this, there is an online component which also boasts cross-play compatibility; always ensuring that a full lobby can be found easily and I have to admit that finding an online game was never a problem. Although playing online offered a better experience than solo play, it simply still didn’t match up to being able to play against family and friends in a local setting.

Obviously playing with friends is a better overall experience, but very rarely do you get a bunch of friends who all own the same game; apart from the big-hitters such as Call of Duty, Battlefield or even Fortnite. If you’re fortunate to have a group of friends who all own the game, then what you get here is a sublime version of the classic board game that is extremely fun to play. However, the game does contain a weekly leaderboard, which adds some competition on a personal level, but it is still quite limited in presenting a form of longevity for the title. The options in general are quite limited within the scope of how you play, although you do have the ability to create custom rooms with some variance on rules and settings. 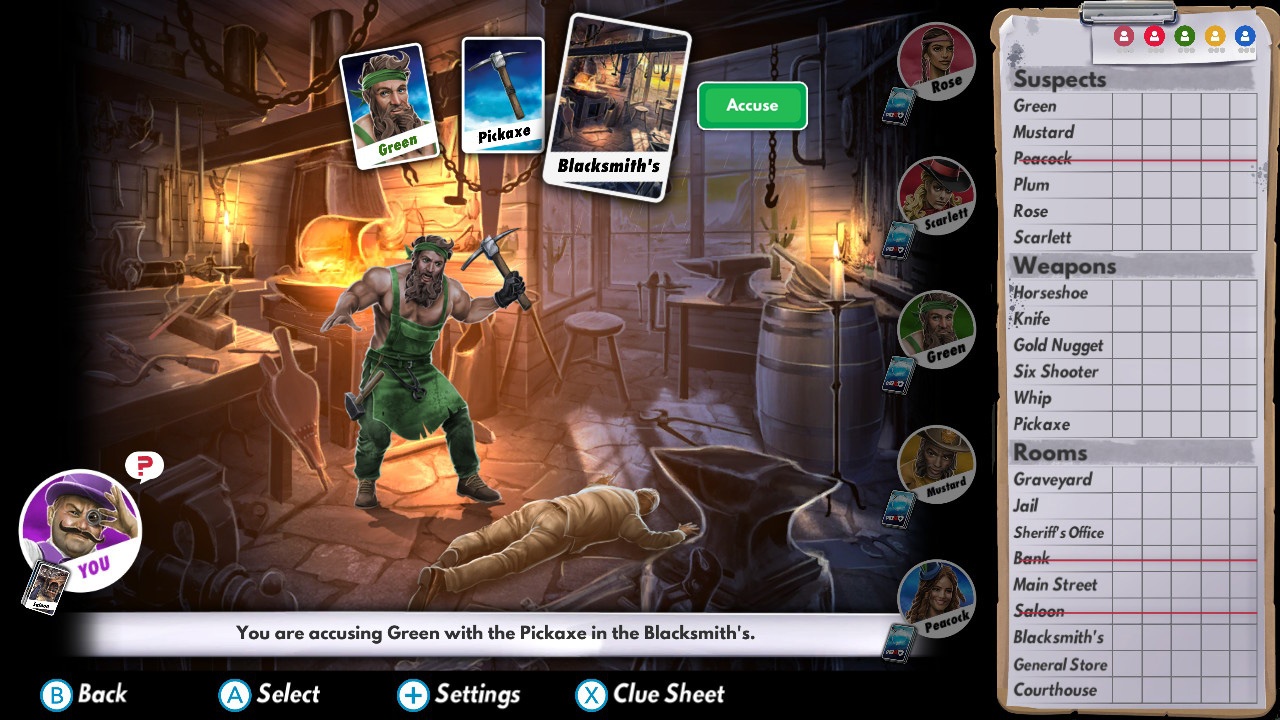 What I will say is though, that despite some elements of the game not fulfilling a true potential, this is a very playable and enjoyable title on the switch. Although no match for real players, the AI perform well and do offer a good challenge. Playing against randoms also steps the game up a gear too and in terms of this, you can say that this is the game’s biggest appeal over the long-term. Its presentation is superbly done, with some really nice graphical features that oozes quality and good models of characters and locales. This is essentially the complete version of the game, as well as a few bells and whistles added on to give its a bit of polish, which really do shine through.

Overall, Cluedo is the definitive version of the classic board game in a digital format. Its whole presentational values are sky high and expertly done, as are its ability to play a highly enjoyable game of the classic. Its variety of locales and characters, as well upcoming DLC, adds a nice touch to help bring a form of freshness, but although it plays a good game for solo players, it is still a premise that can grow old quite quickly and soon become a stale experience. Its online capability does help, along with its weekly leaderboards, but in all honesty, it’s simply not really enough to invest players over the long-term. The lack of local multiplayer is a missed opportunity here, something that would have added to its lifespan, as well as give the player more choice on how they play; although its cross-play function is a very welcome addition. Despite a few shortcomings, this is perfect recreation of the original board game, even surpassing it on some levels, but its omissions are so puzzling, that it’s simply murderous.

A perfect digital recreation of the classic board game, although the omission of local play is simply murderous.