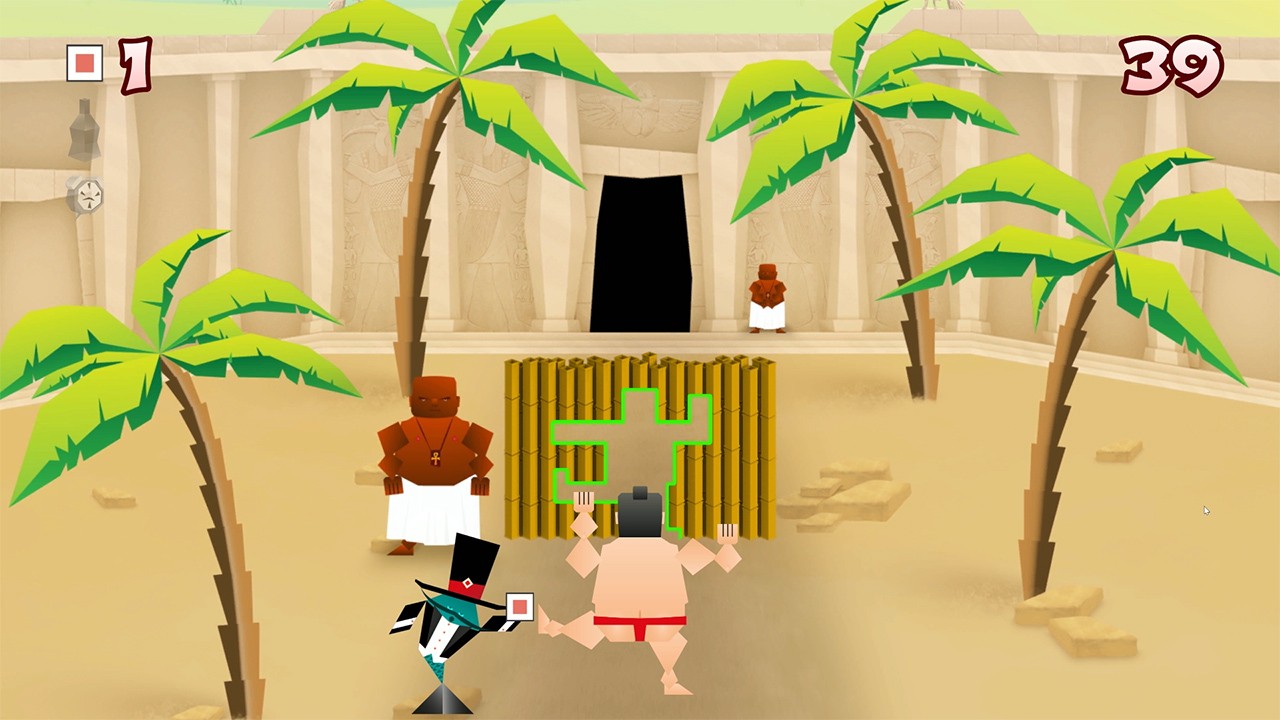 When I bought the Nintendo Switch in the week or so of its launch, it was for a few reasons. I won’t list them all, but two of the primary purposes were to have family-friendly games the household could play together, and the other would be for entertaining guests – so party-type games then. Ignoring the obvious in the title, Tetsumo Party is more or less a party-type game that is a bit of fun for all, but short-lived.

Seeing the trailer for the first time, it looked like it would be a laugh. In the game, you play Tetris using people. That means you pose a character as per the shape of an incoming wall panel. These are cut away shapes that you have to match one of the other to score points. If you don’t pull off the correct shape in time, you get hit by the panel, and it’s game over. And that’s all there is to it. There aren’t any additional modes. There isn’t any real variety other than the different backgrounds per level and the addition of new characters that you unlock with sushi that you obtain in a game. 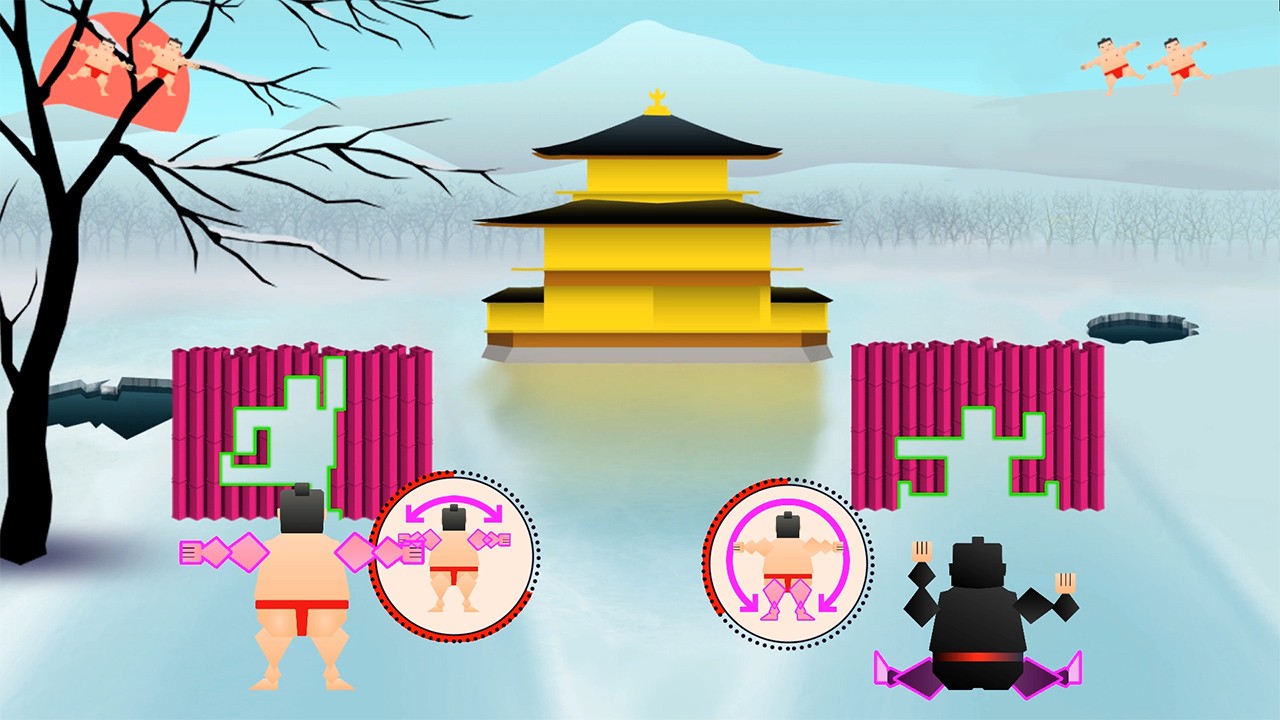 To perform a stance, you take control of your character’s limbs using the shoulder buttons – left side buttons for the left side of your body and right for right. The top buttons are for arms, the bottom for legs. These poses are mostly with arms stretched above, to the side, down or at right angles. With the legs, they stand in a yoga type pose or end up doing the splits when on the floor. The actual character models are pretty basic, and some of the unlockable characters appear to be better to use just through their appearance (they’re rendered better). Other than that, new characters don’t have anything new to offer other than their own challenges. Each time you complete a challenge, you unlock the points needed to get a new character, and so on.

During the game you can collect a few items from your stationary position. A waiter brings you sushi that you can collect with a pose, grab a clock to slow down time and a bottle, which I will assume is saké as nothing is explained. With the bottle, it makes you invincible for a short time so you can afford to have the walls crash into you without having to start a new level. Each time you successfully perform the correct pose, a counter in the top right of the screen is updated. With some of the characters, you will need to get a certain amount to complete their challenge. As expected, should you make a mistake, the counter resets to zero, and you start again at a new location.

The game is based on a Japanese game show and obviously has references to things such as sumo and samurai. Anything beginning with ‘s’ then. Some locations are the pyramids in Egypt, and you even unlock a version of Cleopatra or a mummy. No one is looking for realism in this game, but it just didn’t make sense. I wasn’t losing any sleep over it. 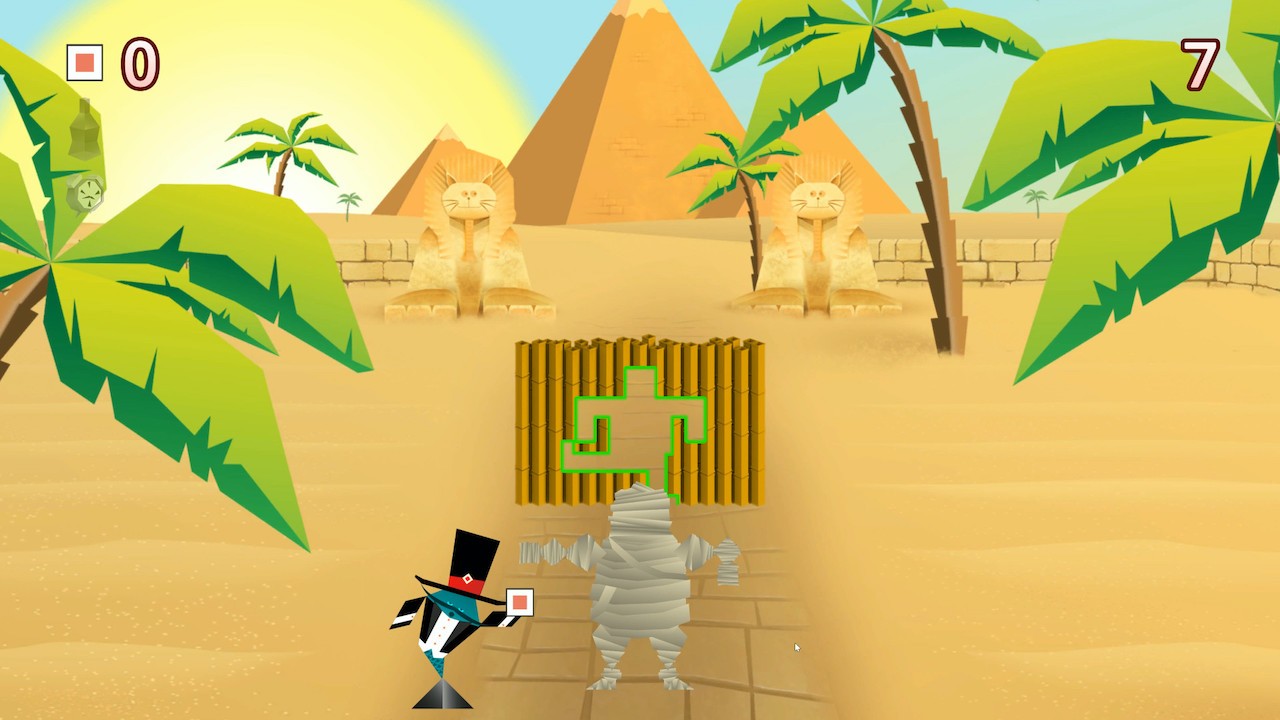 Controlling your character should be easy then as it’s only four buttons. You don’t need to hold onto them, just press each time you wish to rotate a limb but bear in mind that if you move the limb one position past where you want it, you have to scroll through again. When you have all four limbs to control and an impending wall panel, it’s so easy to mess it up and frantically press the buttons to assume the position. And it is for that reason that Tetsumo Party is quite challenging. You can speed up the panels if you get into the position with plenty of time, but generally speaking, there’s not much time to do that.

It’s not the difficulty that is likely to put people off though – more the lack of features. It’s a fun concept and not really been seen that often that I recall. Still, aside from the characters and challenges, you’ll see everything almost immediately. Each time you start a new level, a new background appears. There are only three items to collect in-game, and they are all from the waiter. In two-player mode, you play at the same time in a vertical split-screen of sorts, but as your characters are stationary, there’s no need for the line down the middle. The fun can be had more in the two-player and switching controllers if you’re in a bigger group. When I first played this, it was for about an hour or so then each time after, less and less. When I had guests, it didn’t exceed an hour, but fun enough to play on separate occasions. You’ll more likely have repeat plays in multiplayer, as completing the challenges for new characters isn’t tempting enough when alone.

I would have scored this ever so slightly higher, but on reflection, I note that I don’t come back to it, other than as a party game. Tetsumo Party is a bit of a gimmick and aside from the new characters, not much reason to play other than entertaining a guest.