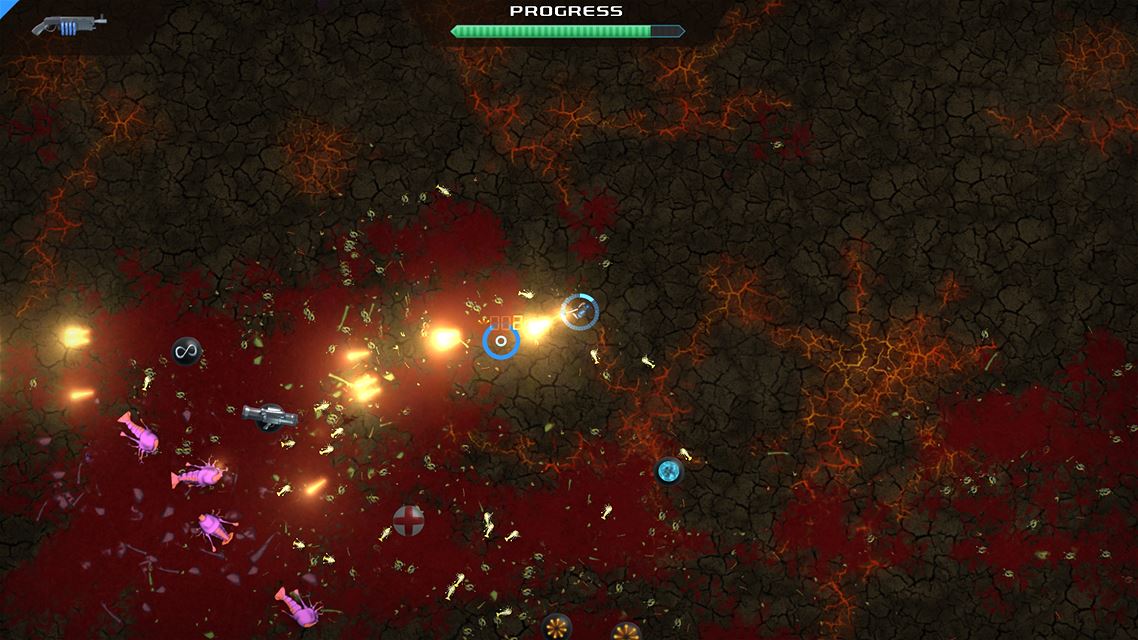 Deception is key to some games. By faking out the player and the AI, a game is able to sneak up on your and deliver a much better experience because you’re caught off guard. Sometimes it’s a traumatic reveal, like certain decisions that need to be made in Heavy Rain. Other times, it’s a brand new gaming world that unfolds, like the world renown Soda Drinker Pro (Switch release when?). Either way, by giving the players one idea and rapidly switching it with another over time, you create a brand new concept that totally blows you away.

Crimsonland, the newest port by 10tons (but one of their oldest and most famous games), is a simple and straightforward idea: twin sticks, tons of enemies, fire at will. The game even tells you as such how simple it is in the control setting; the only buttons are shoot, move and aim. You have the ability to bring up to four players on board (highly recommended) and all of you can work together to take care of the hordes and waves of monsters/aliens that are coming for your flesh. Sometimes surviving is all the story you need, and, guess what, the world’s gone to Hell and you’d like to stay alive.

Quest mode is the primary vehicle for everything in Crimsonland. Starting with just a traditional pistol, you quickly can pick up additional weapons by taking out the first monsters you see and then powering up. Traditionally, you’ll get an AK-47, but the game starts to randomize in other weapons as they come, with things like a shotgun, rocket launcher and plasma rifle becoming some of your best friends. Quest mode is also the best way to see what Crimsonland has in store for you in the future. Starting out with just simple, shambling beasts, you quickly realize that the massive spiders, radioactive corpses and larger “ultra” zombies are coming down the pipeline, and you may not have the skills necessary to deal with them in large quantities. Quest mode partitions everything out in nice, doable servings that get progressively larger as you get better. And you are gonna need time to get better. 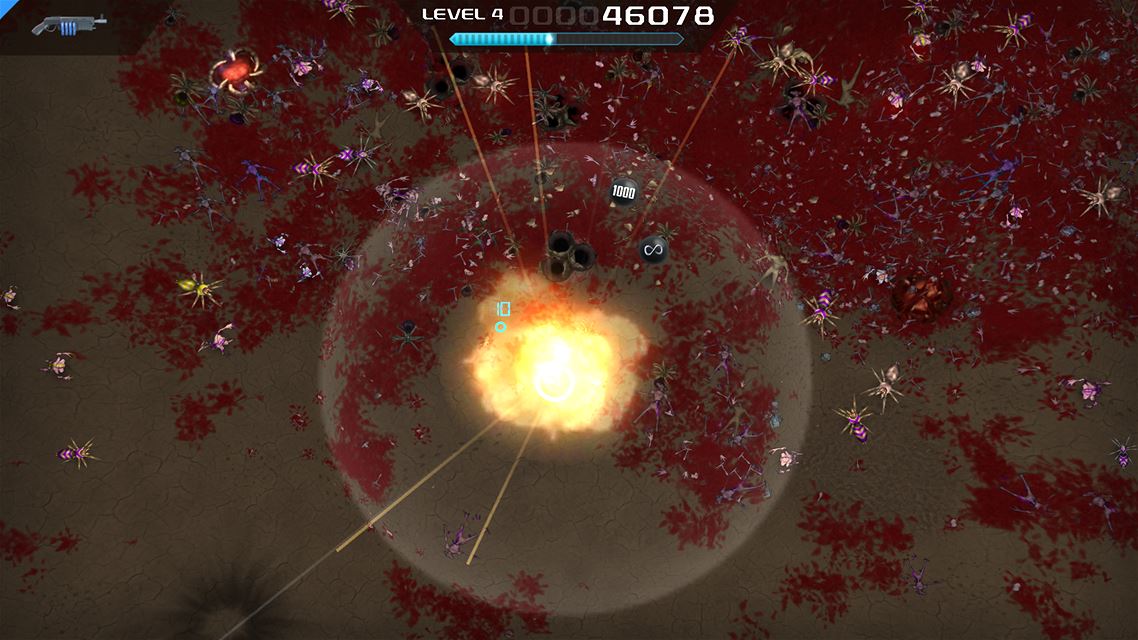 Besides the weapons, you also have a chance to “level up” every so often and unlock a new perk, or latent ability that stacks onto your dude. Sometimes it’s something as simple as a new laser sight that makes aiming a whole lot easier. Sometimes you can gain telekinesis and drawn dropped items closer to you (this is the best damn perk). And sometimes you just get a little bonus of a random weapon of your choice because, hey, this AK isn’t really cutting it, I need serious explosive firepower. The perks also work hand-in-hand with randomly dropped affect weapons, like a time freeze, an explosive halo of bullets or a sudden burst to your character’s speed. Anything can show up at any time, but I can’t stress enough that, should the laser sight appear, take it and take it every time.

This is because Crimsonland is a really tough game in terms of aiming. I appreciate that the difficulty of this is tempered slightly by the unlimited amount of ammunition (and the density of the shotgun is actually pretty grand) but the map is large, you are small and the enemies are also small. There’s nothing quite like sweeping a hail of gattling gun fire over a crowd of eight baddies and only hitting about 3 because of hit boxes, tiny bullets and me apparently being a Stormtrooper. Crimsonland rewards both speed and accuracy with creating environments that keep you alive as long as you can stay on target. You don’t feel overwhelmed until you miss too many times and you hit a precious “reload” moment, where you stop shooting for about one second and everyone moves in. The name of the game doesn’t come from the sun or the soil: it’s from the stain you create with all the bodies you mow down in your simple, vital quest for survival.

Speaking of which, survival mode is one of the first things that you can do outside of Quest Mode, and this is where enthusiasts are gonna spend a lot of their time. Survival mode is as simple as it sounds, with endless enemies and endless weapons coming at you. There’s no greater purpose or goal other than to see how long you can outlast against the baddies, and I absolutely love it. Having played a fair number of twin stick shooters, the simplicity of mowing down bad guys as fast as I can while growing bigger and stronger is almost cathartic. Survival mode is a bit of a misnomer: you only really need to “survive” for about ten minutes while you max out your character with perks and weapons. After that, it’s everyone else who needs to survive you as you’ve become an insanely efficient killing machine. I think this is another case where the game keeps throwing things at you until you physically get too tired to respond or otherwise just drop the controller and let them overtake you. Don’t go quiet into that good night, kill everything till your fingers cramp. 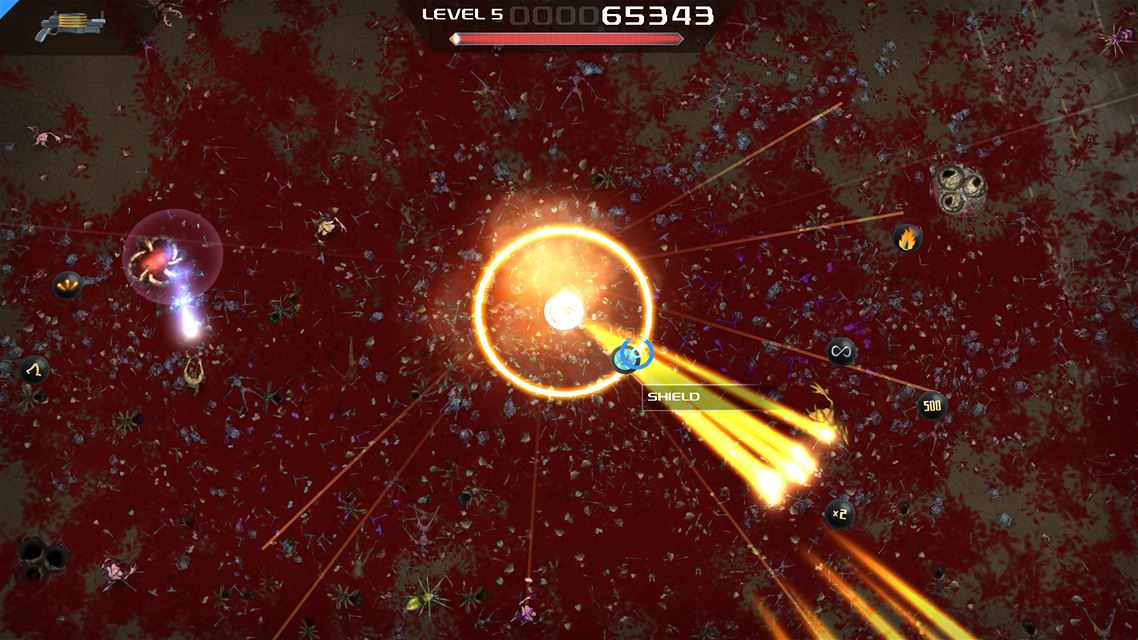 After you’ve had your fun with Quest Mode, and you get the hang of survival mode, Crimsonland has so many variants of Survival that you’ll have plenty of choice on how to enjoy the game. Think the unlimited bullets are too easy? Weapon Picker mode solves that. Hate shooting and just like being nimble? Nukefism, grab whatever you can to set off reactions and survive. Think Survival mode is “too tame?” Geez, fine, here’s Blitz mode, good luck with all that madness. 10tons takes a simple core idea, polishes it to a sheen, and then builds on how to make that same simple idea deliver in a variety of ways. That takes some creativity, and it’s great because the ideas all manifest themselves right there, on the battlefield.

The deception in all this comes from the fact that Crimsonland is several years old now, but still plays like a great release that could come out today. You see a very basic menu and game design, but it explodes into a huge array of achievements, game modes and exciting prospects. Combined with it being just as fun solo as it is with multiple people, Crimsonland now feels like it’s finally found a gristly hill to make camp upon, here, on the Nintendo Switch. If you’ve genuinely never tried this before and like twin stick shooters, you really can’t find a more frantic and fun situation than Crimsonland.