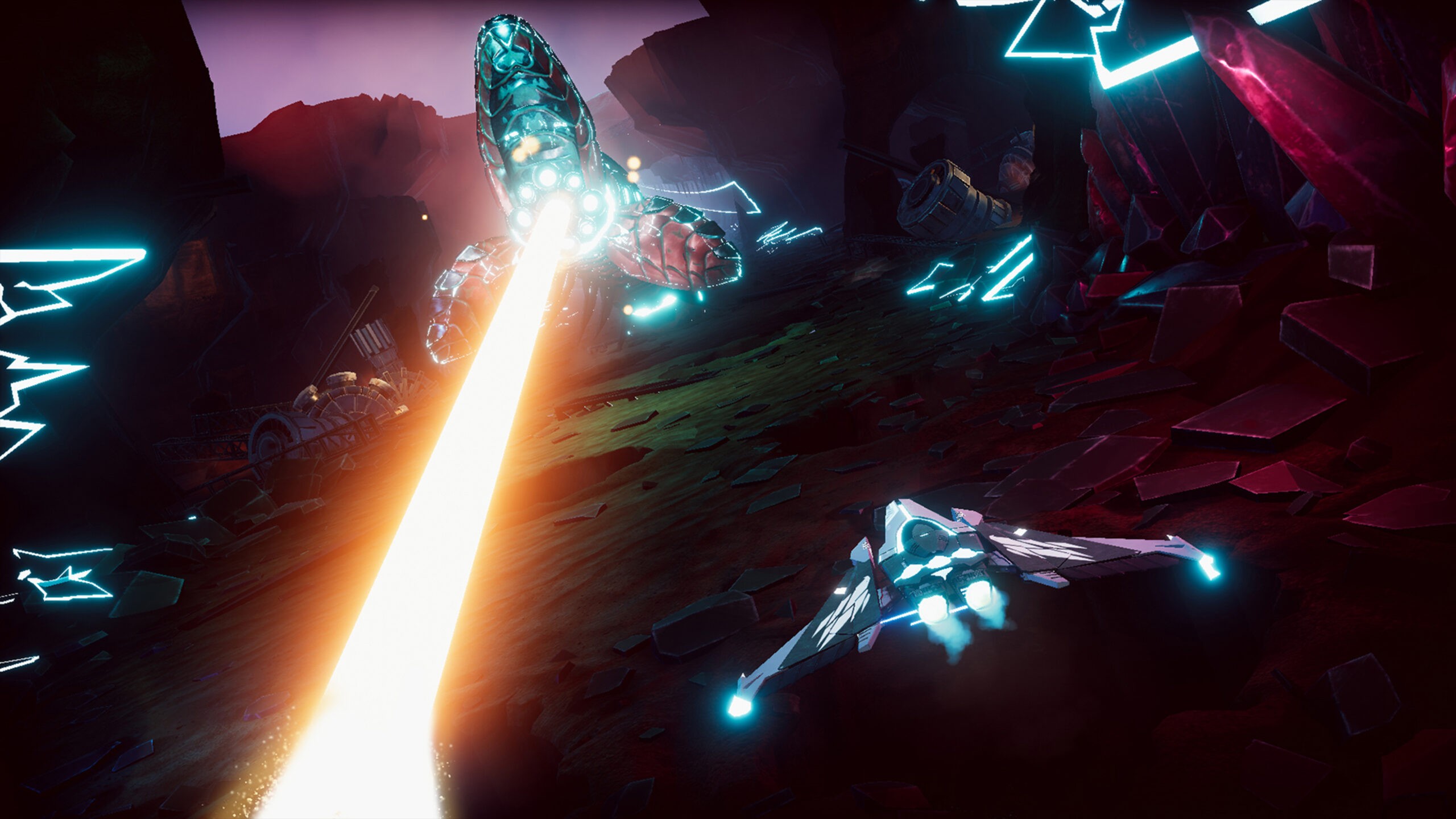 How important are menus? How about progression? Lost Wing, BoxFrog Games’ largely fantastic racing/shooter hybrid had me asking those questions on a surprisingly regular basis. This score-based racer has a near pitch-perfect arcade-style gameplay; it’s a beautifully balanced, mechanically sublime, utterly addictive gameplay experience, but one wrapped in one of the most oddly obtuse menus and annoyingly slow progression models I have come across in quite some time.

Of course, gameplay is king, but it needs to be mentioned as, important or not, the menu is the first thing you see when you boot the game up and, well, this is a rough one. It looks fine, but my god, is it ever needlessly convoluted. It was a surprisingly horrid start for what quickly tuned in to one of my favourite gaming experiences of the year. It’s hard to explain why the menu is so bad, but needless to say, it just is. Saying that, you will get used to it, and in the grand scheme of things, it’s hardly at the top of my gaming priority list.

What is at the top is gameplay, and in that regard, BoxFrog Games have knocked it out of the park. Initially resembling rhythm games such as Amplitude and Thumper, but sans the fixed tracks, Lost Wing is actually closer to the likes of Spy Hunter – something of a survival racer (if I could be so bold as to make up a new genre). You’re still racing down a narrow course to largely catchy music, but here, you have full freedom of movement, along with jump abilities and blasters for your ship. The aim here is to simply survive on your way down the track as you avoid/blast obstacles, pick up orbs and multipliers and finally defeat a boss. Once that is done, well, the challenge just keeps going and going. 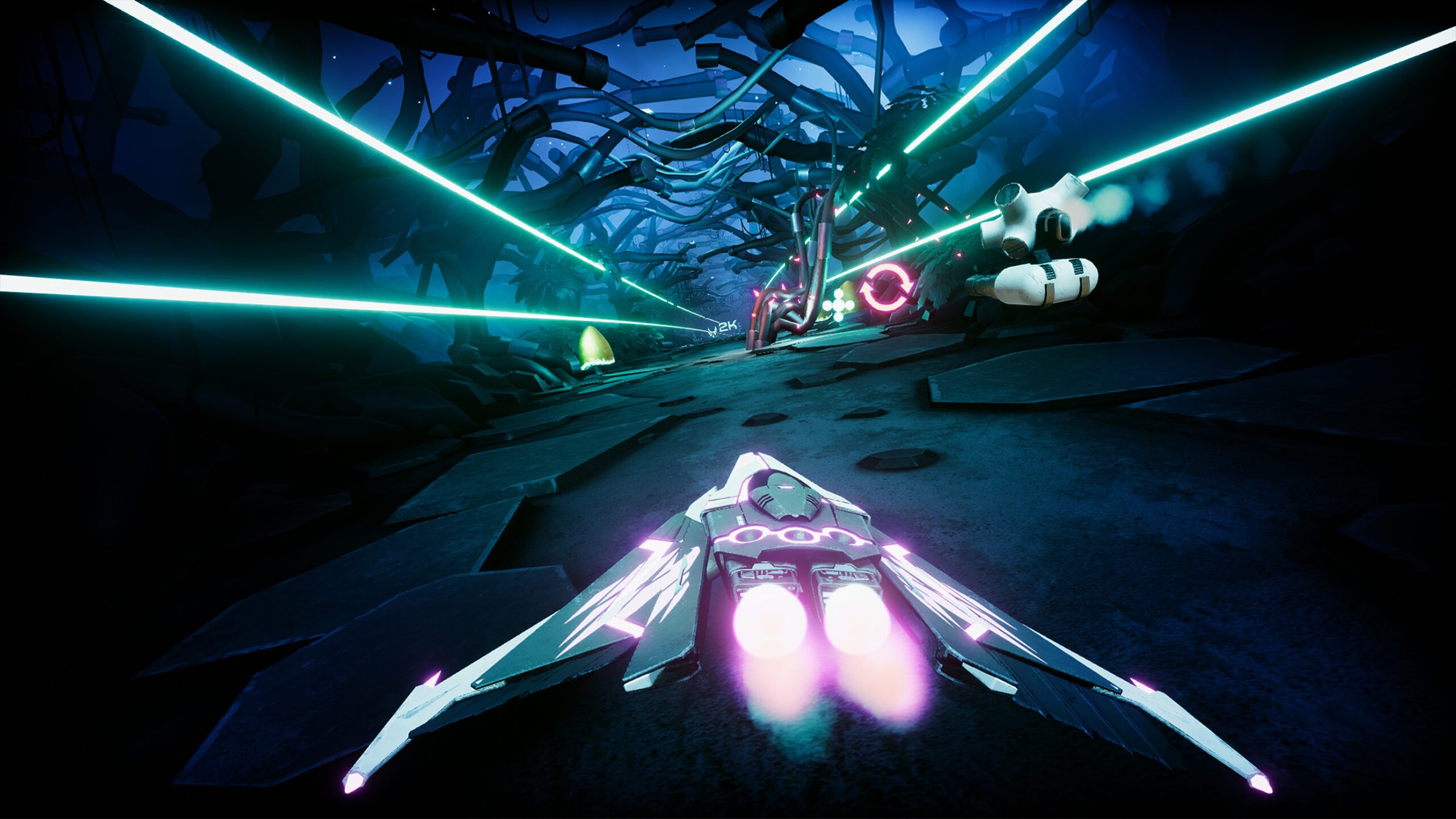 Every track might have a boss to signify the end of the traditional challenge, but what you’re really competing against is the bar at the bottom of the screen which shows your progress against your best score, and perhaps rather cruelly, your current score vs the global record for that track. Once the boss is defeated, the track simply keeps going…and going…and going until you finally crash – which you invariably will. Of course, you can speed up your point accumulation by picking up multipliers, but with each stage essentially an endless course, it’s really about how long you can survive / retain higher levels of attention required to succeed. It’s brutal stuff, but believe me, this has to be one of the more addictive games I have played this generation.

Sure, the gameplay loop never really changes, and each stage represents little more than a re-skin of the last, but that never takes away from the purity of challenge on offer here. This is a purely gameplay experience, one that will have you embedded deep in the zone as you chase higher and higher scores across the games’ increasingly unforgiving difficulty settings.

It’s hardly a cakewalk on easy, but as you progress (somewhat slowly) through the games’ additional stages and difficulties, you will have to manage Lost Wing’s perfectly balanced risk vs reward speed mechanic. Blasting objects allow you to pick up multipliers and make you run far more manageable, but with your blasters linked to your charge (something that is powered by going fast and picking up orbs), you’ll have to balance the need to keep the boosters on vs the obviously increased difficulty of tearing through the stages at the highest speed possible. It’s a relatively simplistic system, but one that works brilliantly, adding additional depth and challenge to the experience without ever over complicating those sublimely simplistic mechanics. 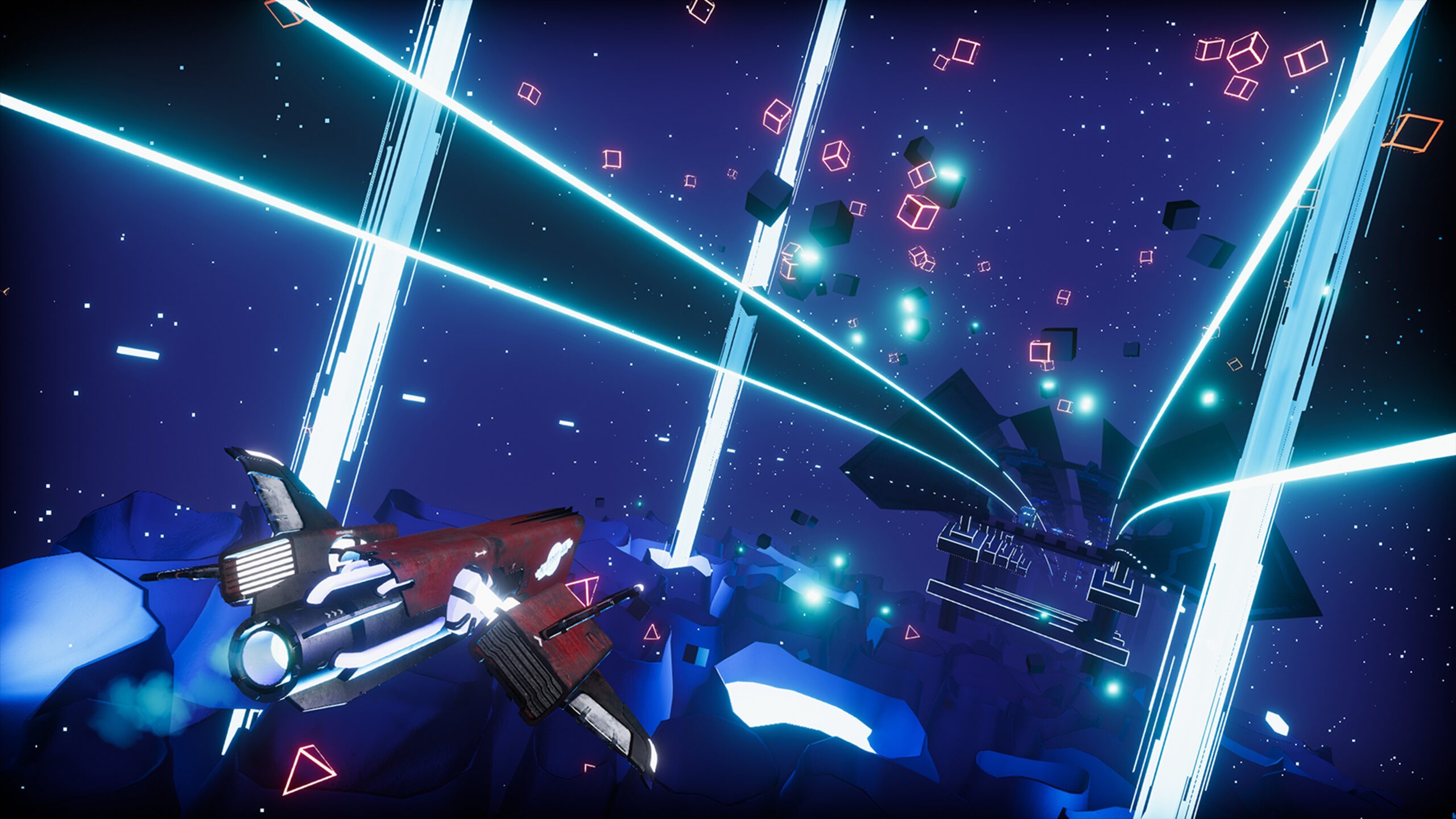 It’s a shame that, while improving your own skills feels effortlessly smooth, the game itself seems intent on holding back your more literal sense of progression through the game itself. Whether it be unlocking additional tracks or, perhaps more importantly, unlocking the increased difficulty settings, Lost Wing drip feeds its somewhat limited content at an absolute snail’s pace. Perhaps it’s because of its somewhat limited content, but honestly, this isn’t the kind of game that needs a million tracks or ships – I just want to be able to try out what is there as I naturally improve my own core skills.

Again, like the menu system, it’s hardly a game breaker, and for the most part, I was more than happy to replay courses to improve my score, it’s just that, well, it feels like another easily avoidable roadblock, one that I hope will be patched down the line.

Minor issues with structure and progression aside, though, Lost Wing really is a fantastically playable video game. Its emphasis on pure gameplay harkens back to the arcade-centric style of 80s video game design while delivering an utterly modern audio/visual experience. The music can be a tad forgettable and the visuals, while solid enough, are unlikely to live too long in the memory, but that core gameplay loop, that perfect balance of risk vs. reward, that most certainly will. Those looking for depth or variety should look elsewhere, but if you’re looking for an utterly addictive challenge, something to be mastered via incremental improvement, then you really need look no further than the sublime Lost Wing.

Minor issues with structure and progression aside though, Lost Wing really is a fantastically playable video game.