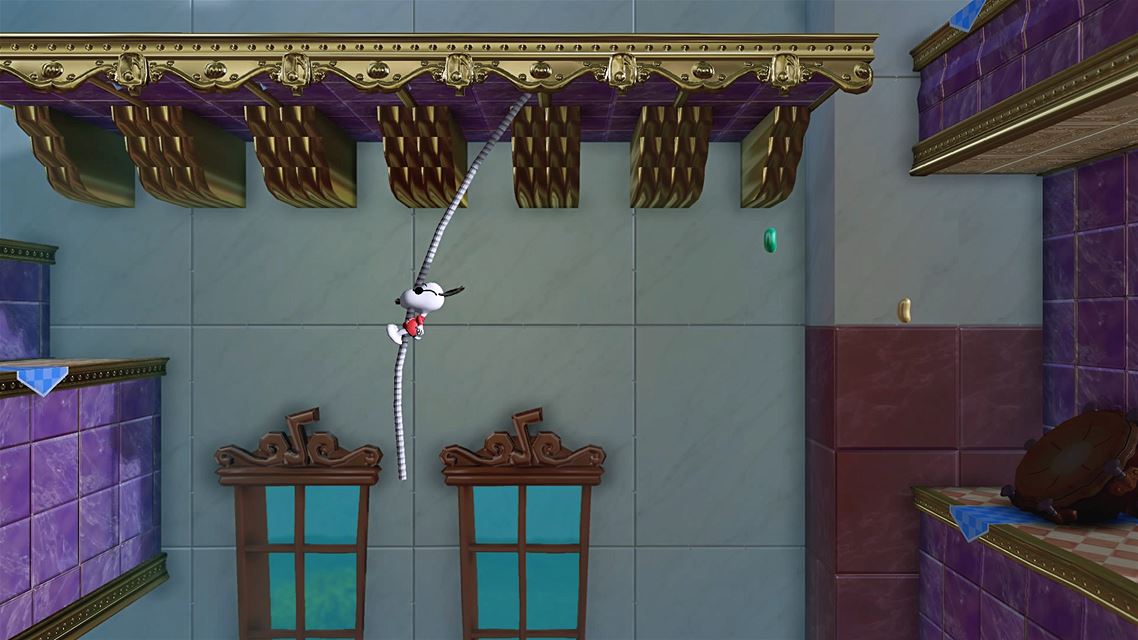 At the grand old age of sixty-five, Peanuts shows no signs of slowing down. An institution of Americana and innocence, the comic strip originated from the creative mind of Charles M. Schultz back in 1950 and has since spawned a countless number of spin-offs and merchandise, including a much-beloved animated series and even a theatrical production. Of course, that also means a number of video game incarnations have cropped up over the years, ranging from the early days of gaming on the Commodore 64, right up to record-breaking handheld, the Nintendo DS. Just in time for the upcoming new animated film, the greatest dog in comic book history returns in a sparkly brand new adventure for both last and current-gen consoles.

Developed by Behaviour Interactive and published by Activision, Snoopy’s Grand Adventure is a relatively simple, child-friendly caper. The plot sees Charlie Brown and his friends partake in a game of hide-and-seek, where Snoopy is unfortunately tagged as “it” and must locate each member of the Peanuts gang. Venturing into a world of imagination, the faithful beagle must follow a trail of jelly beans and adopt a number of different personas if he’s to track down his friends and save them from the terrors of the neighbourhood.

The game follows the time old tradition of the 2D platformer, albeit one that has been given a glossy makeover. The game may be targeted towards a younger generation, but players of all ages will enjoy this throwback to golden age of platforming games, with Snoopy’s Grand Adventure taking many of its cues from Sega’s classic Sonic the Hedgehog formula. It’s true that Snoopy doesn’t possess the whirlwind speed of the lesser-spotted blue-skinned mammal, but with multi-story level designs and drop-in-drop-out co-op multiplayer to say the least, there are a number of parallels between the two. 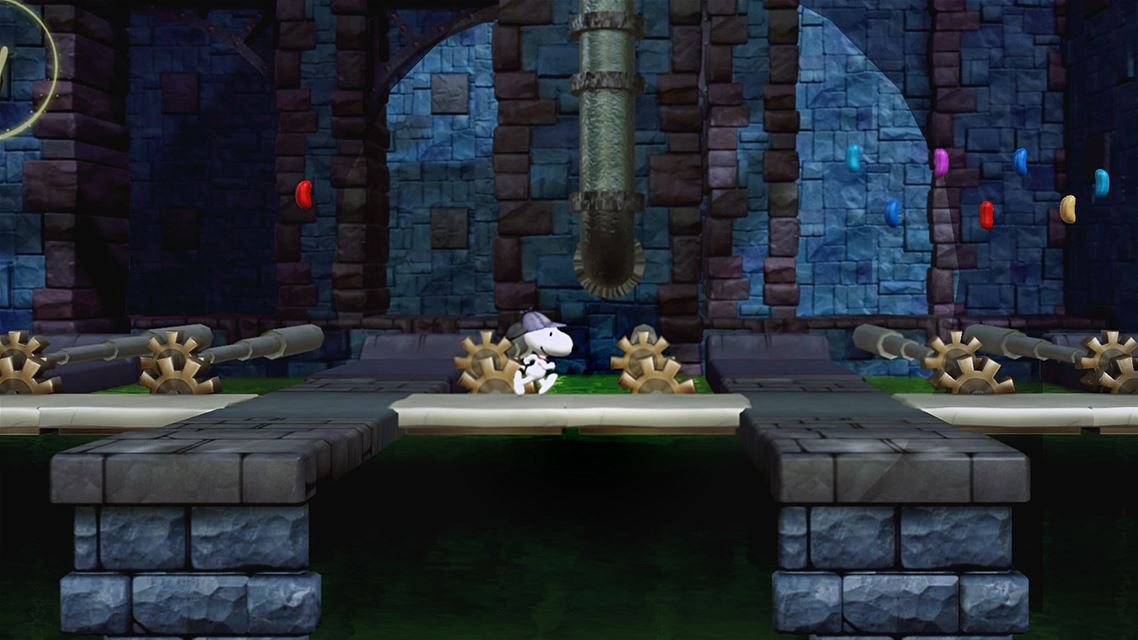 For starters, Snoopy can twirl his ears around like a helicopter, a move that has been lifted straight from Sonic’s companion Tails. It’s the first of many skills you’ll need to learn if you’re to not only navigate from platform to platform in each level, but also if you’re to collect the three hundred jelly beans that lie scattered around at varying heights and depths. At the end of each level is a doghouse that marks your goal, and while every jelly bean is not required to progress, for completionists, it will mean an awful lot of backtracking and even returning to levels at a later stage.

Quickly, you’ll learn that certain paths will be blocked or unreachable without some assistance. Some of these obstacles can be overcome with a little help from your old friend Woodstock, fulfilling the role of player two in this adventure. The camera focuses on Snoopy so at times, his faithful birdy sidekick gets left behind and soon you’ll realise that Woodstock’s role can be coordinated by simply turning on a second controller and keeping it on stand-by for when those environmental puzzles come around. Even a younger audience will be quick to point out the redundancy of Woodstock’s role in the grand scheme of things.

For those going it alone however, there are still plenty of ways to obtain not only the hundreds of jelly beans in each level, but also to find the missing members of the Beagle scout patrol that are hidden underwater, behind secret walls and atop sky-high perches. The controls to begin with are relatively simple, utilising simple jumping and movement. However, Snoopy’s brought his wardrobe with him and each one of his costumes provides him with a special skill that can be used to navigate certain environmental road blocks throughout. The Scout ranger hat will allow him to climb up reeds and wire fences, while the Parisian underground mask gives him the ability to smash through cardboard boxes and enemies alike. Not all of these costumes are available at the beginning of the game, so you’ll find that backtracking through some levels is common place, while journeying back to already conquered worlds is a necessity if you’re to achieve 100% completion. 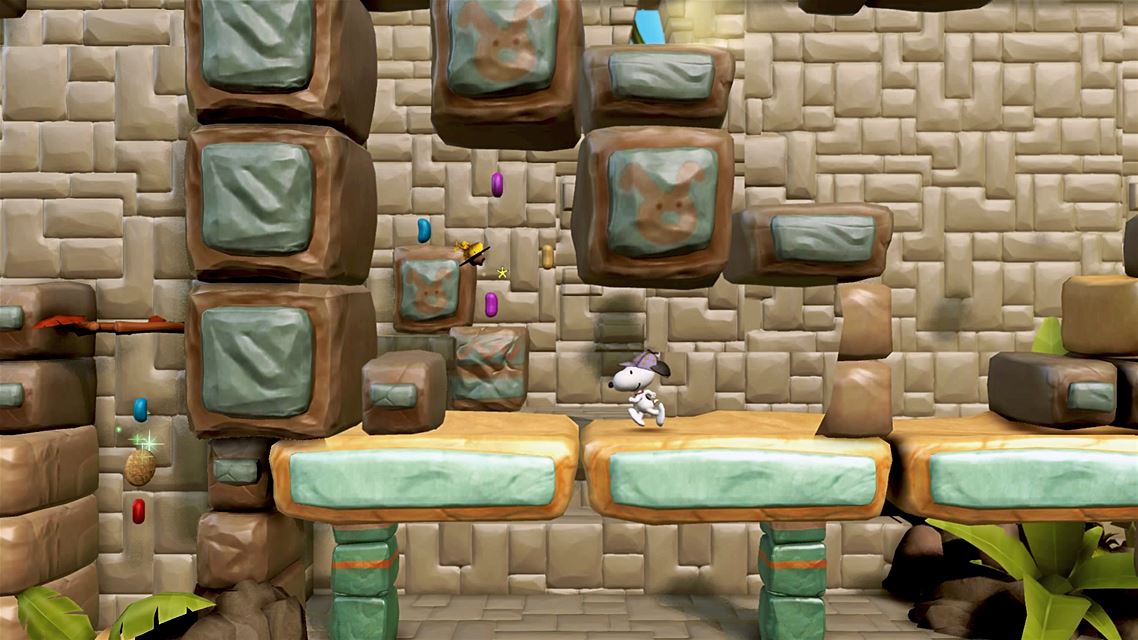 Each world is themed differently and to the game’s credit, they are designed in a way that’s vibrant, bold and alluring. Powered by the Unity engine, the does what it can with its limitations, even in the face of some minor frame rate issues. From the swamps of the Peppermint Jungle to the futuristic Lunar Surface, there’s plenty of variety, although having four levels plus a boss battle in each world seems a bit much at times. By the second or third outing, you’ll have already grown bored of the copy-and-pasted enemies and environments that make up a level, and considering how much backtracking you’ll have to do, it’s enough to put you off coming back for a second helping any time soon. Throw in the fact that the music for each level plays on a loop and it’s enough to drive anyone insane.

Thankfully, the boss battles that lurk at the end of each world provide some stimulating entertainment and are worth the slog of completing each world. Inspired by each one of the Peanuts gang, the skill to defeating these bosses are both simple and varied enough to enjoy. Some will require jumping on the boss’ head three times while others involve successfully staying alive for as long as possible in order to rescue your friend waiting in the wings. Reaching these bosses is perhaps the highlight of every world and spurs you on to complete the previous four levels just to see how the game puts its spin on a classic Peanuts character.

The relatively short play time will be enough for most, but for trophy hunters there’s always the option to go back and complete all the objectives, if you can stomach to overly sweet but repetitive level designs for longer than necessary. But as far as Peanuts-inspired games go, Snoopy’s Grand Adventure is one of the better ones. Not only does the game a warm, friendly, safe atmosphere for younger gamers, but it also provides a bit of a throwback to the golden age of platforming, particularly for anyone who owned a Sega Mega Drive or a Super Nintendo.