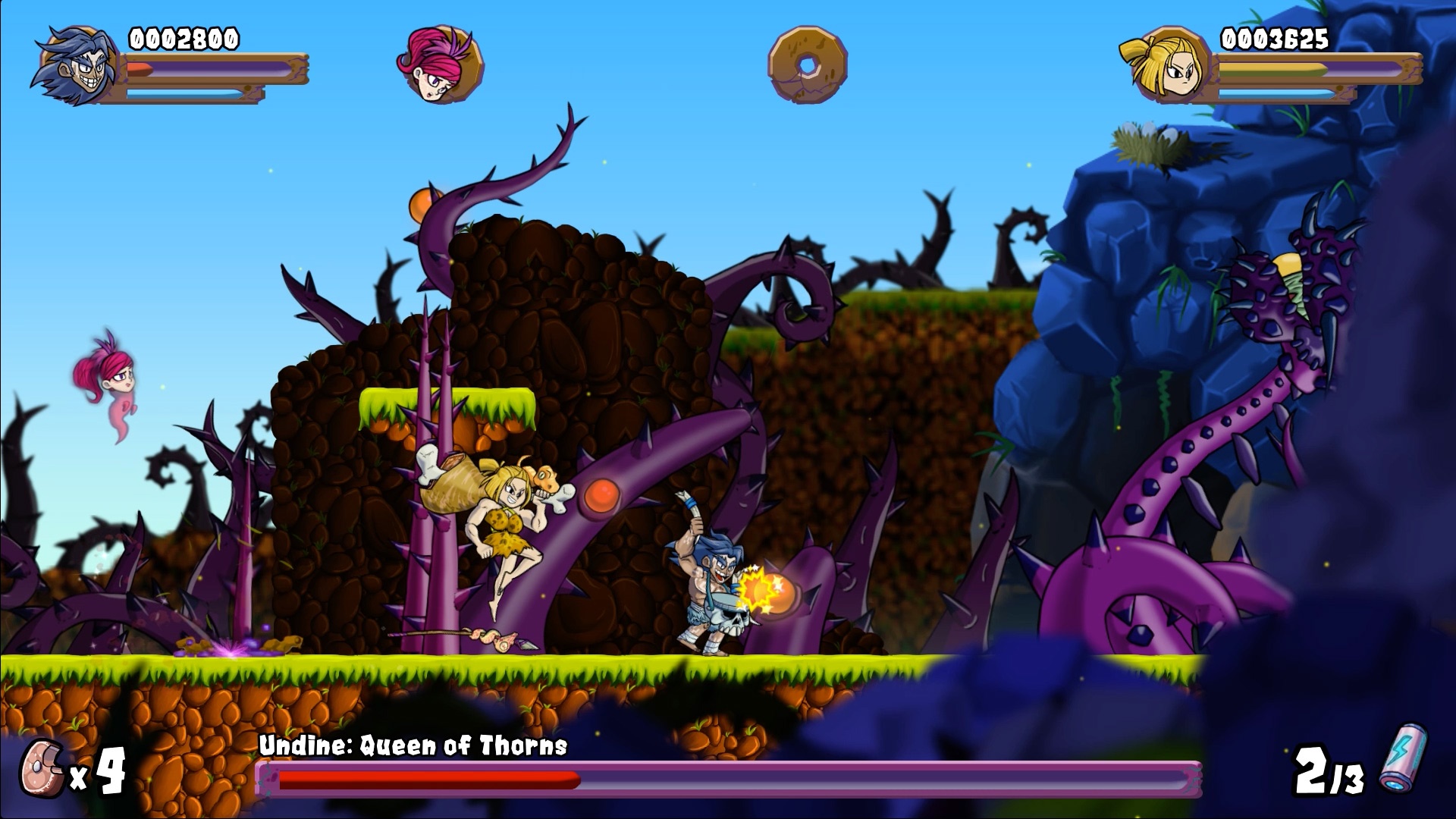 Caveman Warriors is a bit of a mad cap arcade platformer which is set in pre-historic times. The plot (which is portrayed in the style of a comic book) revolves around an alien spacecraft abducting two babies from a family of cave people. This small band of four caveman warriors then pursues the aliens across the game world encountering many obstacles and bosses along the way.

The first thing that struck me about Caveman Warriors was just how polished it looks. Everything from the characters, to the level structures, to the backgrounds are wonderfully illustrated. The overall look has a bit of a Flash animation feel about it with lots of smooth motion and vibrant designs. All the stages look luscious, unique and sharp.

The game is designed for simultaneous four player local co-op, with each character possessing a unique ability that is required for the team to bypass obstacles. Should you be playing on your own or with a group of less than four, you have the ability to change your character on the fly using the shoulder buttons, similar to the Trine games.

The main campaign comprises of eight linear stages. The first half of the game, although challenging, showcases the abilities of the team with individual levels dedicated to particular mechanics. For example, the first stage contains a lot of large vertical walls which require the character who throws spears to create additional ledges. The following stage contains caves which are blocked by soft obstructions, these require the caveman with the charging ability to smash through them. Once you’ve become familiar with each character’s strengths you’ll be much better prepared for the later stages. 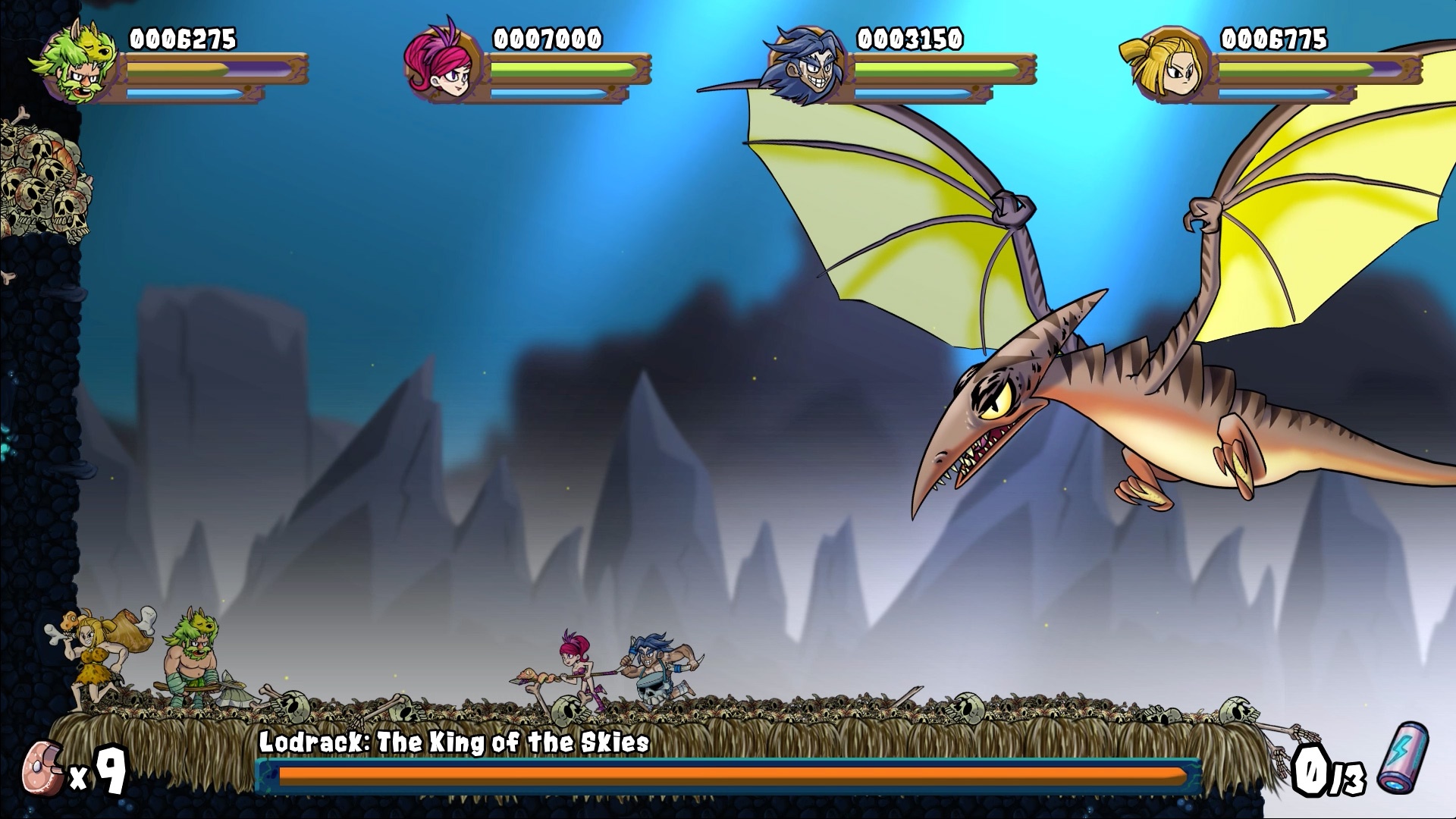 The gameplay will feel very familiar to platform game fans. A lot of the obstacles such as ledges that descend under pressure, moving platforms, water jet ledges, these are all things that can be found in the original Super Mario trilogy. However, what this game lacks in originality, it makes up for in polish. The diverse range of character abilities and tight controls will ensure that you enjoy the experience.

Each player has a health bar which allows you to take a handful of hits before you lose a life, however enemies can be very aggressive. Most of the baddies will either charge directly towards you on site, or spout some projectiles when you’re in damage range. There are also some nasty examples of enemy placement which can prove to be very annoying. What makes life a bit harder is that each character’s default attack is actually a short range melee move. Longer range attacks can be used at the expense of some stamina so they have to be used sparingly, otherwise the character will get tired and need a second to catch their breath.

The bosses are no push over. They are all very creative in their design and very satisfying to fight. Bosses normally have phases when they are vulnerable to attacks, but in order to push them into this phase you need to shut down their defenses. For example, in the first stage there is a plant boss that you cannot damage until you have attacked all of its glowing buds. You’ll then be granted a short period to inflict as much damage as possible. The second boss is a flying creature that you can score some minor hits in mid air, however it isn’t until they crash land that you can really take advantage and inflict some major pain. 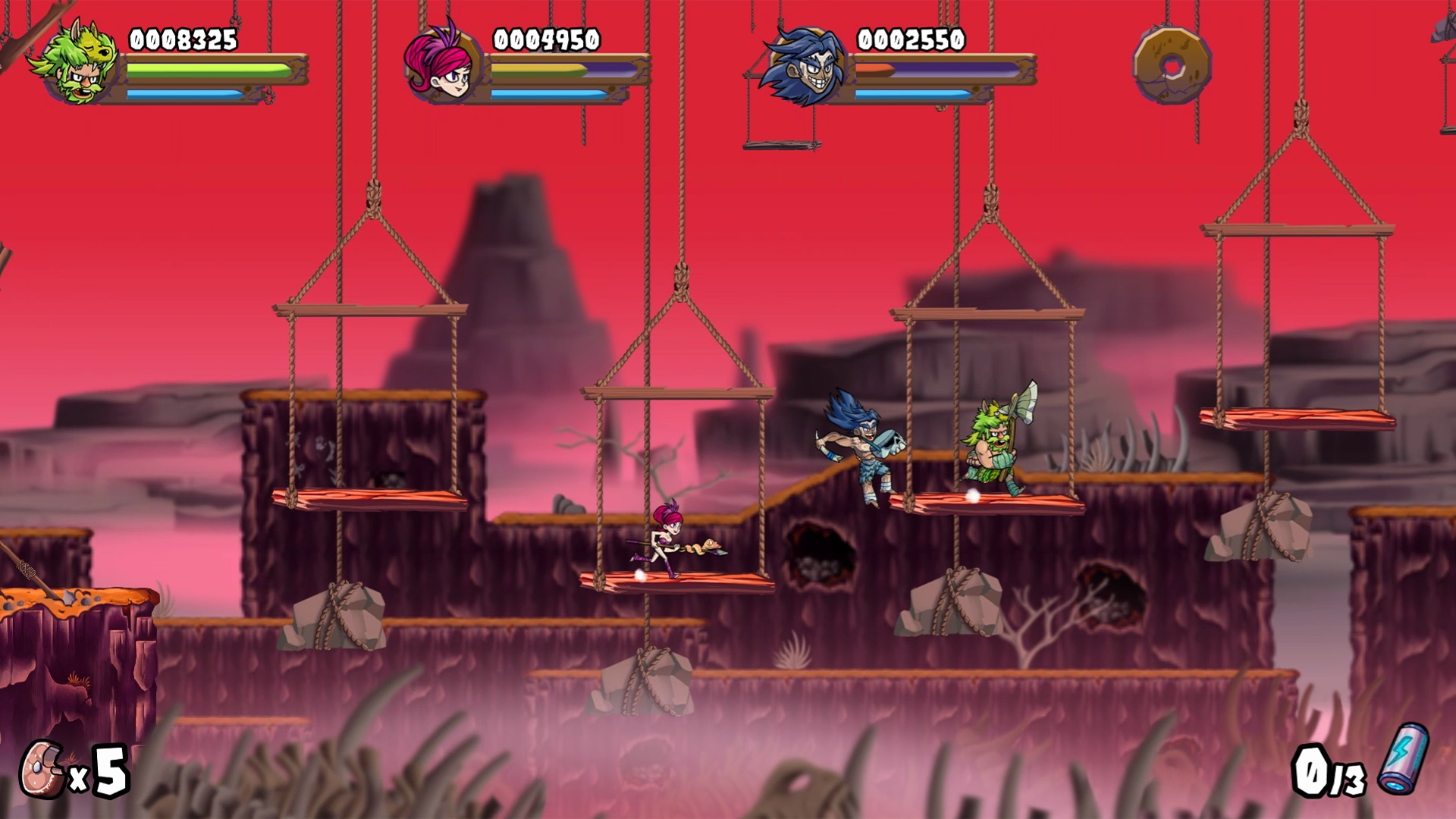 In the main game mode you have about four or five lives and unlimited continues. Stages can be a tad long with large distances between checkpoints. Each time you lose a life you return to a previous checkpoint and when you lose all your lives you have to begin the stage over. It could be argued that the checkpoints are not frequent enough as I remember having to repeatedly beat tricky obstacles in the vain hope of edging closer towards the next checkpoint, however I think anything less could potentially shorten the game’s length. Although tricky, I think this game is quite well balanced.

There are additional challenges that can be unlocked such as extra mode and arcade mode. These can be unlocked by beating the game with enough collectables. Each stage contains three collectable batteries. Some are in plain sight in tough to reach places, others are well hidden and require some searching. They are not essential for beating the game, but if you want to push yourself you can always return to previously beaten levels to try and find the ones you missed.

Overall Caveman Warriors is a pretty good game. I didn’t encounter any bugs or glitches, and although there were frustrating moments I never felt as if this game was unfair. Although it doesn’t really offer anything original, it combines some interesting mechanics and executes them perfectly. Top that off with the fact that it’s visually very appealing and you end up with something that is definitely worth giving a try for yourself.