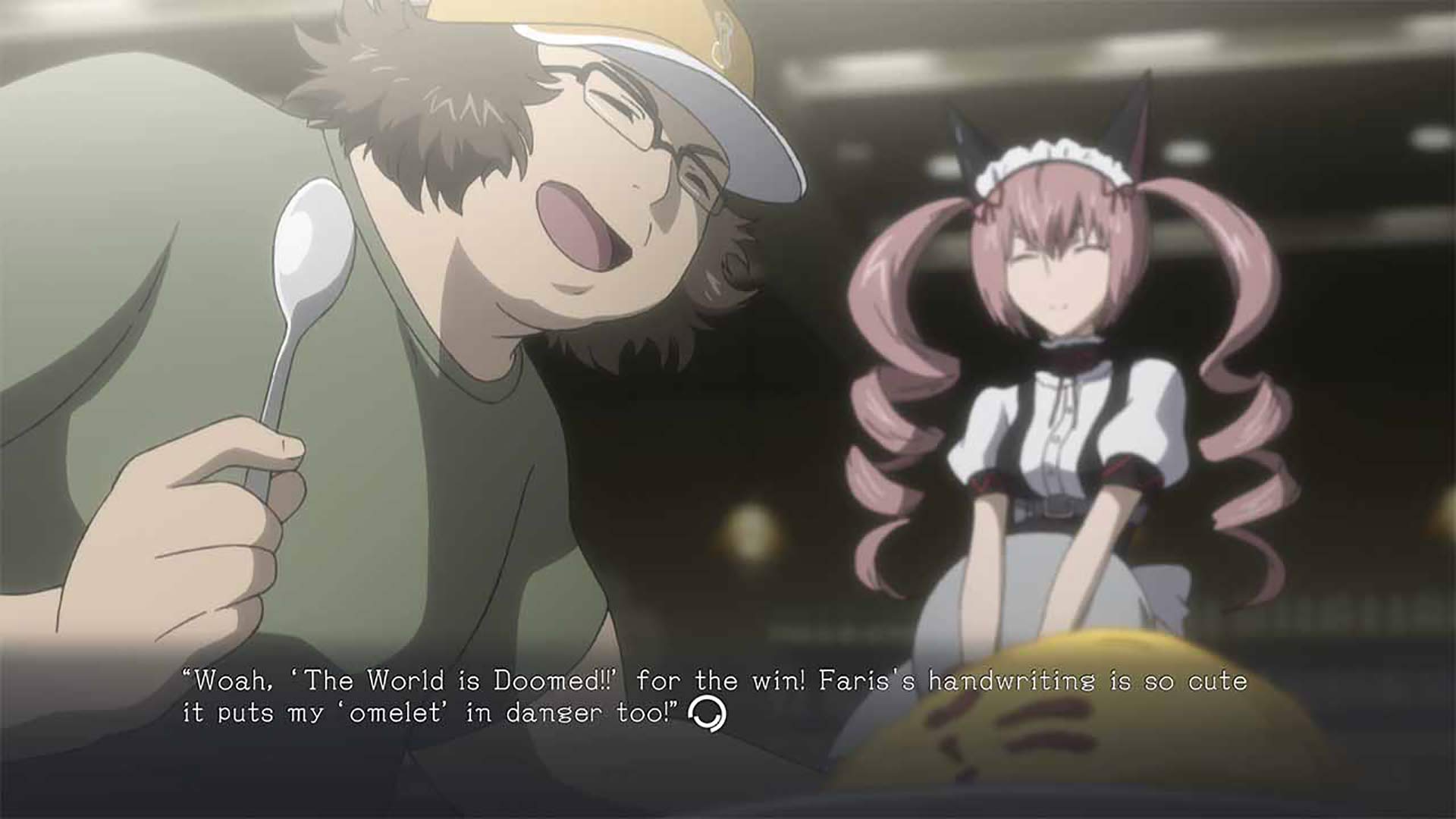 There isn’t a thing in this world of video games that can kick as hard as a good visual novel. Argue and bray about other wonderful RPGs, adventure games and indie darlings that are basically visual novels with extra steps, but there’s a damn good reason why developers found out you could take a Choose Your Own Adventure book, remove a majority of the choices, lay the text over graphics and convince a bunch of voice actors to give dramatic readings of some of the most insane settings ever conceived. The stories and twists of good visual novels are strong and compelling in a way that transcend traditional books, acting as a good comparative piece, but not a replacement. And when a visual novel graduates from “interesting concept” to “mind bending phenomena,” it no longer becomes a choice: I must play it. As such, the legendary title of time travel and butterfly wings that flutter in Akihabara and start or stop World War III is now on the Switch, and in a beautiful, amazing package. This is Steins;Gate Elite.

Rintaro Okabe is living a life that few can dream of. He is a self-professed mad scientist who made up his own new name (Kyouma Hououin) that literally no one else seems to use. He’s spent his life trying to invent new ideas and create things that go beyond the bounds of the human mind, though, as an 18 year old university student, it’s safe to say that most of his money still comes from his parents. Though he’s gotten several people to join in on his special think tank (called the Future Gadget Laboratory), he hasn’t yet stumbled upon anything truly breathtaking or amazing, but is undeterred and certain that his actions are drawing the attention of a faceless, nameless government entity known only as The Organization. All of these fantasies and illusions come to a crashing halt when he encounters a murdered young woman inside an office building, and then flees home…only to run into her a short while later, alive and well. After confirming that he isn’t going crazy, it turns out that his invention, the Mobile Microwave, does more than he realized: he can send text messages to the past. These Delorean Mails, or D-Mails, can have major affects on the time line, and it’s only a matter of time before Okarin (the nickname Rintaro is often referred as) stumbles upon an even greater trick, effectively allowing people to travel into the past. However, if you keep telling yourself the boogeyman is going to come knocking at your door, eventually they will, and a much larger, much more dangerous group will be gunning for the FGL’s amazing inventions, no mater what the cost. Will Okabe be able to save everyone he cares about? Or will the coming fate of the end of the world be confirmed with a simple text message?

Stein;Gate Elite is a dynamic visual novel with a medium to long playthrough and lots of endings, with most featuring Okabe finding romance with one of the Lab Members that he recruits in the course of the game. In order to find out which path you’ll be going down, the name of the game is your phone, and the “phone trigger” system. Throughout the course of reading all of the chaos that is this game, you’ll have opportunities to answer or decline calls, and to read then ignore or respond to text messages. Some are from the present, some from the future, and some from the past. In theory, you can play through the game in a matter of a kinetic (or choice-less) visual novel, but this will result in probably the worst ending of all. There are plenty of melancholy endings that give notions of there being a better ending for everyone out there, and there is definitely a way to achieve a “True” ending where we all get to live happily ever after in the purest way. Like most visual novels, you won’t be able to just stumble upon the best way for the story to end: you’ll probably want to play through the game several times, not only to understand what happens, but also to see the characters develop. 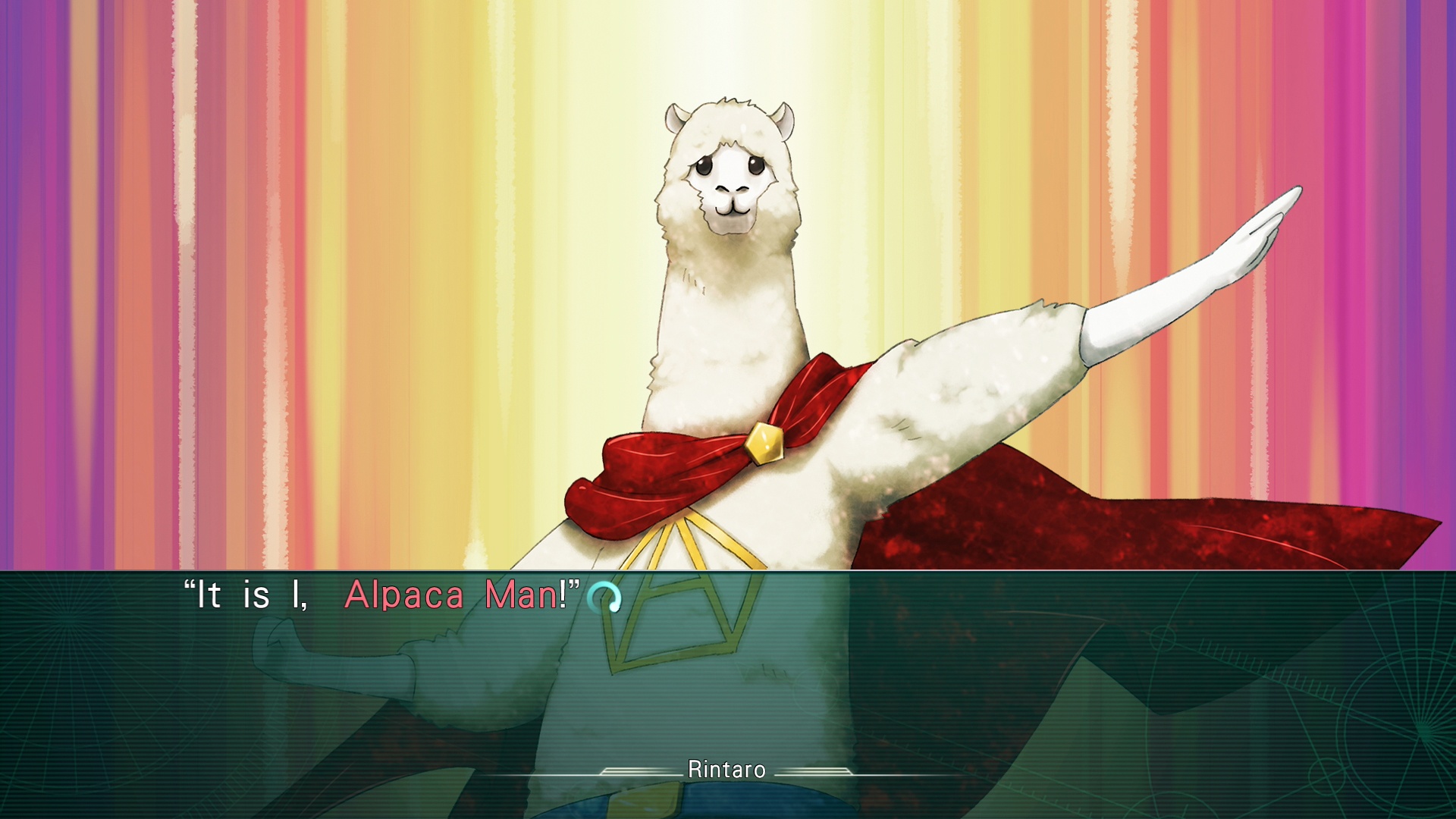 What’s spectacular about Steins;Gate Elite is the core value and story that exists throughout. The cast of characters is a wide range of values, from Okabe’s false pretension of genius to hide his insecurities and fears, to Mayuri’s innocent and bubbling positivity even in the face of horror, and even Daru’s trope-laden otaku behavior that is somehow counterbalanced by his realistic views of things and his dismissal of Rinataro’s delusions. The cast is marvellously voiced, giving a full range of emotion and deliberate choice throughout the entirety of the saga. It’s incredibly important that the cast is so strong, because the number of choices that we make in the game are pretty slim, so you need to be entertained by the darkness as well as the light. Similar to Our World is Ended, Steins;Gate Elite makes a point to have a lighter flair when the Lab Members gather together, but, in stark contrast, Steins;Gate manages to maintain this full strain of seriousness once the ball really gets rolling. Jokes and asides almost feel like dark deflections as to what is happening and the seriousness of the weight that slowly begins to stoop Okarin’s shoulders. There are people who die – good, innocent people – and we can only hope that things can be altered.

Steins;Gate Elite also is a fascinating insight to the ideas and fragility of the human condition, and what it means to be human and to want to connect with humanity in a larger capacity. 5pb and Mages have this ability to be at the helm of visual novels that check in with deeper, stronger messages that resonate further than “this is so that I can find a girlfriend.” There’s such a focus on this game about the ideas of hubris/nemesis that it reads, at times, like a Greek tragedy, particularly in the guise of Doctor Nakabachi and what his obsessions lead to in both losses to his own self and losses to the world. The inability to accept responsibility for terrible actions, and the drive to try and fix wrongs that are beyond our control, also pop up again and again, and it’s all set against a backdrop of science fiction and meta-science that almost gives it an air of plausibility. That’s the magical world, though: “almost.” You never quite buy enough into the mythology of Steins;Gate to fully believe it could happen, but it does a wonderful enough job of convincing you that the characters believe it to be true, so you, in turn, believe them. 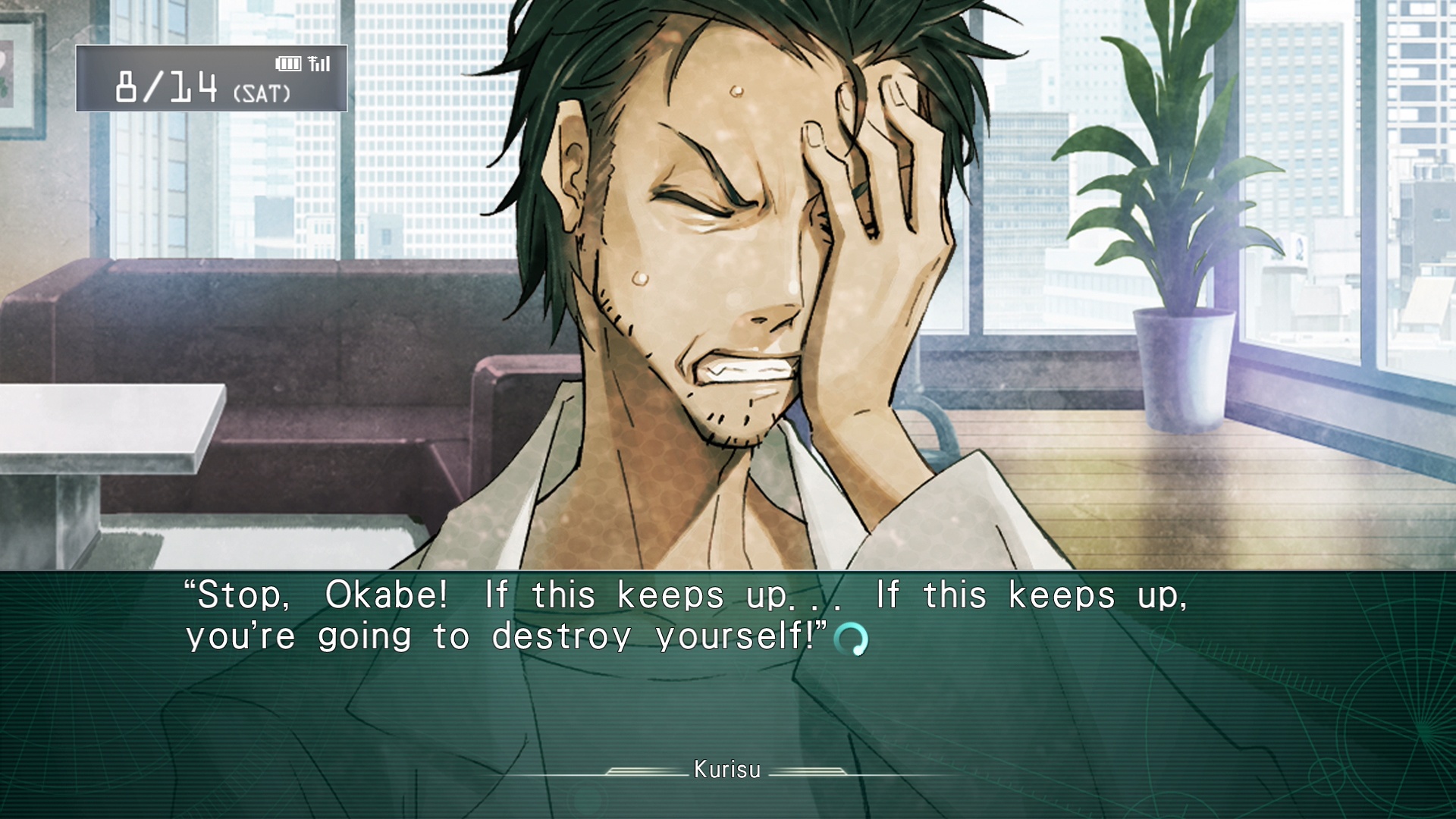 The one thing about Steins;Gate Elite that might be a large draw for some is the updated presentation style. Since the game was such a massive hit, it was later turned into an anime that many people have seen and possibly might be the only venue where they have experienced this mind bending story. The developers have decided that this Elite edition should be completely animated, redoing the game from the ground up in the style of the anime (and borrowing liberally from scenes directly from the anime). This presents an interesting situation. On the one hand, it definitely makes the game more engaging due to the level of action and emotional presentation we didn’t see in the static original (which had a couple animated moments to accentuate the storyline). Combined with the voice acting, Elite becomes a sort of Bandersnatch-esque experience, giving a bit more gravity to what is happening to all the Lab Members and to Okarin himself. If you’re coming straight from the anime or are unfamiliar with Steins;Gate, this is a magnificent way to start.

On the other hand, it feels uncomfortable and strange in the realm of the visual novel genre. The original art styling of Steins;Gate is discarded in favor of the anime, and there was a sort of gothic appeal to the original (not gothic as in dark, but gothic as in Middle Ages) that we thankfully bring back in other games. Additionally, I felt like I lost control of the momentum in several instances. Even when you’re finished reading the text and trying to advance the story forward, you sometimes need to watch a short animated moment to completion, which removes the agency from your decisions. It’s okay when you’re doing your first play through and getting a feel for the game overall, but when you’re doing subsequent runs and are in a rush to get to the right branches where new stories might unfold, it’s frustrating and slows you down. Oh, and the file size is also MASSIVE compared to the original (over 7 GB compared to a little less than 2GB), which could be a make or break for people with slow internet and limited memory cards. By the way, I gotta consider going up to 512 sooner than I realized, because these games are coming fast and furious and I can’t slow down.

Still, Steins;Gate Elite is the creme de la creme of modern visual novels, and I acknowledge and respect the transition into full animation to deliver the story in a more powerful way. Certain reveal moments are definitely stronger and hit harder with more action behind them, and I wonder, deep down, if there’s any hope for a proper live action movie with CGI to fill in some gaps. If you’ve never played it, please give it a try. This is a fantastic addition to the libraries of any visual novel connoisseurs, and it’s a wonderful starting position for people who haven’t played visual novels before and are turned off by the overlong harem tropes and eye-rolling teenage writing that comes with dating sims. Highly, highly recommended.

The mad scientist of visual novels smashes out of conventional presentation with a fully animated take on the gripping thriller/comedy of time travel and love.