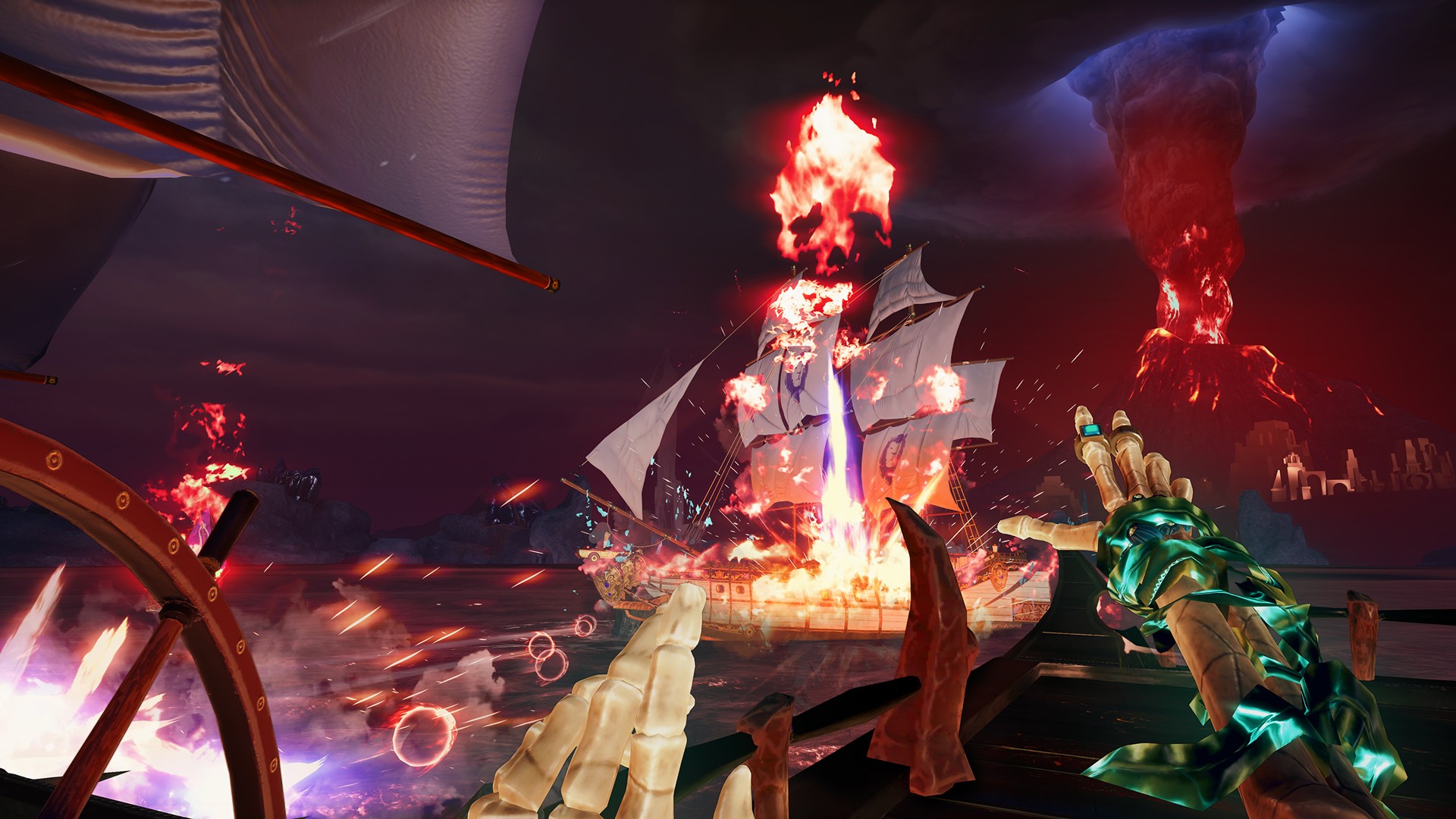 Hot on the heels of another PSVR game, this time around it’s the seven seas as we take control of a ship in the age of piracy. Issue a tsunami, tornado or Kraken at your foes and doing drifts on the water that make Wave Race 64 look like a bus doing doughnuts in a swimming pool. Battlewake is a fast-paced arcade action game that looks fantastic, feels great when it comes to controlling the ship – be it dodging incoming attacks or doing a 180º to tackle a fleet of ‘baddies’, but best of all, it doesn’t evoke any motion sickness. Could this be the battleship you’ve been searching for?

Do you remember Assassin’s Creed Black Flag and the battleship action? Of course, you do. Well, Battlewake is like that, only in virtual reality. You take control of a seemingly empty ship as it cuts through the waves with ease, with you taking the wheel with either your DualShock or Move controls by grabbing and gesturing the direction you wish to turn. There’s no lack of wind in the game, and you’re never fighting to gain momentum. Instead, it’s the opposite as you’ll continually be moving, using the handles to your side as a handbrake for your two anchors located on the ship. It’s almost like playing Need for Speed on the waves, only no points for drifting. Surely there’s a follow-up driftwood joke in there? In summary, the ships handle really well.

As for the attack side of things, you have machine guns(?), cannons and mortars to shoot enemy ships and the Krakens from afar. You’re not just limited to conventional weapons, but you can instigate a tsunami and tornadoes. It seems a bit silly, but this is an arcade game through and through, so it works well, and the attack side of things is fun because it’s just so darn simple. Besides, there’s a good variety of upgrades that will help you and one of the four mythical pirate lords dominate the seas with the hardiest of arsenals. Aiming with the Move controls were the better experience, as all you need to do is point with the crosshair to aim and fire away, giving you the freedom to pull at your anchors to spin around to target the next ship. 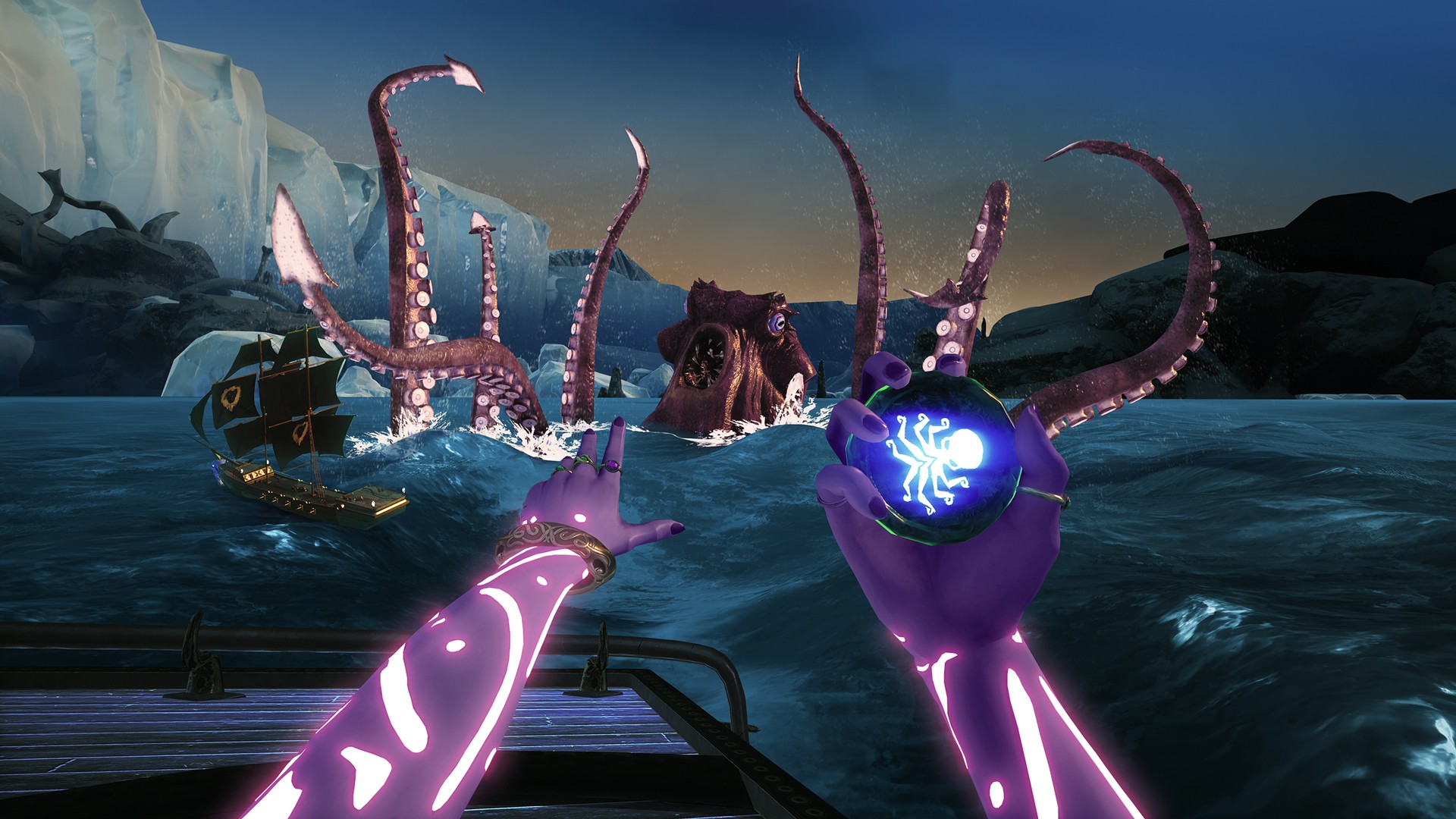 There are three modes in Battlewake, the first being the solo campaign and the other two being a co-op mode called Warfare and a third Plunder option which is essentially a PvP option. With the solo campaign, you have a choice of four captains, each with their respective ability, and you compete over five missions per captain. They’re mostly the same with little variety, but it works and is a bit of fun to be able to work your way through slightly different playstyles. Interestingly, you can carry over the upgrades you earn from the solo campaign into the multiplayer mode, which is further incentive to stick with the story, even if it is a little non-existent.

Multiplayer modes such as these are predominantly the deathmatch, and while I was pleased to see a co-op option, there’s no real desire to team up with anyone, as you can achieve so much by yourself. The real staying power of Battlewake is mostly the combat system being so easy to get to grips with, without losing complete control of your ship, but also the fact that as a VR game based on the sea, there were no feelings of motion sickness. VR seldom bothers me unless I’m not taking breaks, but I do get seasickness and hate travelling on open waters, despite a keen interest in piracy. I’ll leave that dangling there, but I’m talking about Blackbeard et al., nothing you need to call the cops about. Ever since experiencing Assassin’s Creed III then expanding on it in AC: Black Flag, I’ve been keen to command another vessel in an arcade-like environment – something simple where you don’t have to pay attention to the winds or review maps every five seconds. 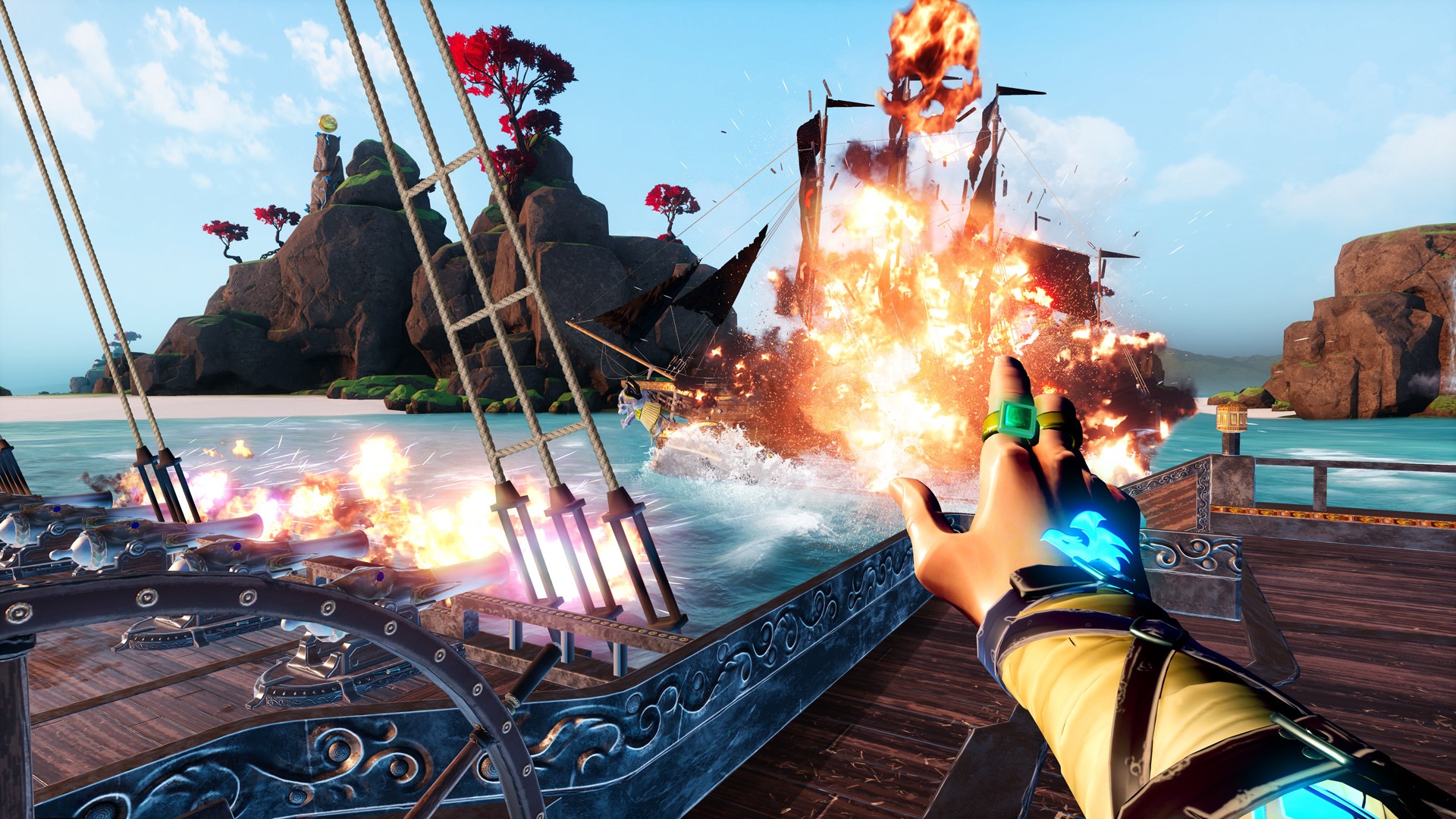 With Battlewake, simplicity is paramount as the controls and gameplay is just so easy to get into, you can have a lot of fun sailing then issuing a tornado to wipe out your foes with a cruel, but cool set-piece. And perhaps that is the games slight downfall as, forgive any sort of pun, it lacks a little depth. If there were a few more game modes or a more appealing narrative with associated objectives, it could have been a better title. While the PSVR isn’t my forte, I don’t think multiplayer is the way to go with VR games as it’s more of a personal experience. Also, the fast-paced action and unpredictable nature of playing in an online environment is a bit too much from my perspective. I’d rather have the option to go solo and bask if the polygon ambience. Though the solo path is there, it’s the co-op mode that is more appealing.

Battlewake would probably be enjoyed more as a multiplayer setup and having played that option the least, I may have missed out. While the solo campaign is enjoyable, it gets old quite early on, and this isn’t a title you’re likely to come back to again and again – even if you can rally up a few other players or go head to head with strangers, there’s not much variety in terms of game modes, but the feel of commanding your ship with little if no motion sickness whatsoever is a feat in itself.

Almost like Crazy Taxi on the waves, Battlewake is a very playable arcade-like game, but like the referenced title, has a short lifespan through the repetitive nature and perhaps the lack of challenge for the above-average gamer.