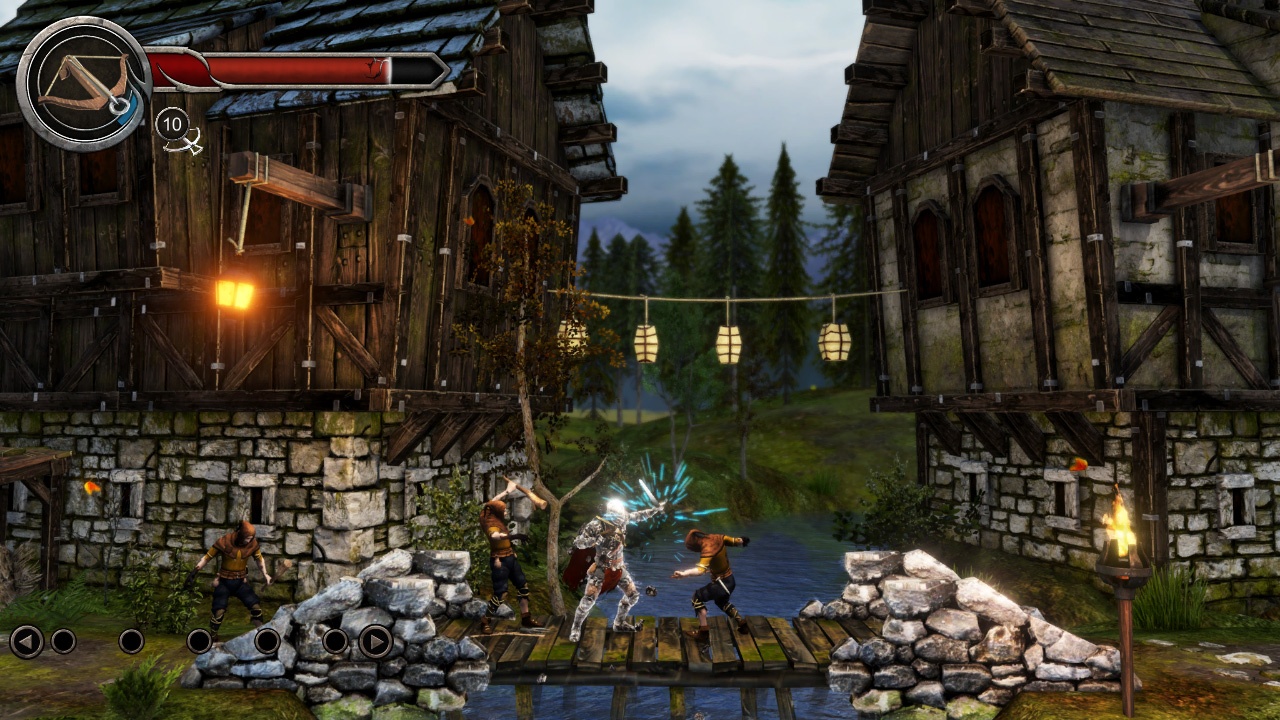 Legend has it that, once upon a time, an evil sorcerer with a heart of stone lived in a dark castle atop a mountain that was shrouded in fog. In the valley below, a peaceful village lived under the shadow of the great tyrant who demanded that the villagers worship him with tributes and sacrifices. As time went by, the greed of the sorcerer grew ever hungrier, until the people of the village could give no more to the amount he demanded. A fair maiden, who lived within the village, had found the love of a brave knight who, one day, stepped forward to defend the honour of the villagers lives.

Angered by this show of defiance, the evil sorcerer unleashed a dreadful curse upon the village, turning all of its inhabitants into stone, including that of the brave knight. Only one person remained: the fair maiden who had captured the heart of the fearless knight. The evil sorcerer decided to take the young woman captive, locking her away within the deepest dungeons of his great castle. As he dragged her away, a solitary tear fell from the distressed eyes of the fair maiden, its descent falling through the cracks of her stone covered love and filling his heart with life once more. As that brave knight, you must journey through hell and high water to save your fair love, end the sorcerer’s rule and return your body to flesh in Polish developers, 7Levels’ new game, Castle of Heart; an exclusive title for the Nintendo Switch.

With a story played through the chapters of a book, you embark across twenty levels that take you through four very distinct environments that range from the cursed village to grand castles, eerie forests and snow-capped peaks to the infamous dark castle itself. Essentially a 2D, hack & slash platformer, Castle of Hearts boasts a visually impressive 3D backdrop that brings each of its locales to life with a gloriously high quality graphical presentation that is based on real-life locations from Slavic mythology. A lot of people will find similarities in the gameplay that are reminiscent of Castlevania and Ghosts and Goblins, however, for me and if you’re old enough to remember, this title reminded me more of the old arcade platformer, Hunchback; only this title brings the same formula smack bang into the twenty-first century. 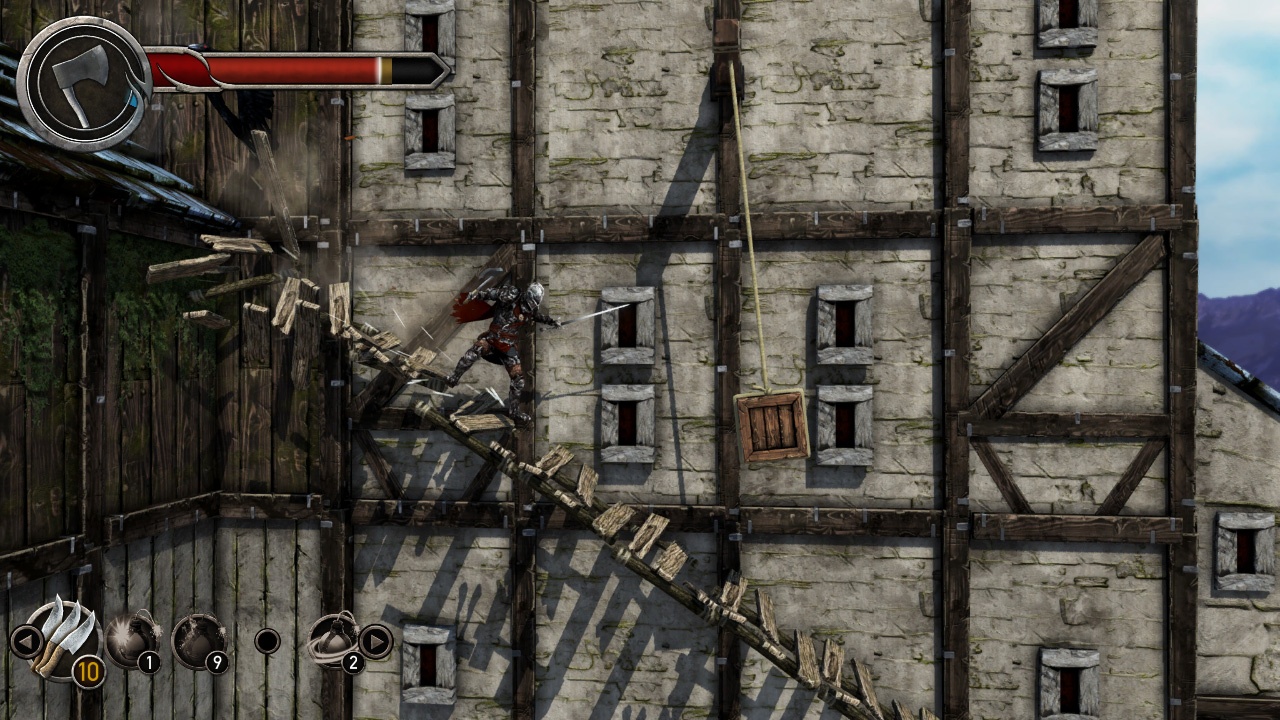 You play as the hero of the story, the knight who was so cruelly turned into stone. Between you and the reclamation of your captured love, stands the minions of the evil sorcerer and various obstacles to try to hinder your progress of going further. From converted disciples, ogres, crows and traps, each level offers enough of a challenge to keep things interesting with a large variety of enemy types and puzzles. To make your journey even more interesting, the curse placed upon your body constantly drains the life force from your soul. In order to keep alive, you must kill enemies and retrieve orbs that release the energy to keep you topped up. If your life meter falls too short however, you begin to crumble and lose some of your limbs.

With around fifty varieties of long and short-range weaponry on offer, as well as the ability to dual wield, the need to remain complete become vital in order to progress. However, each level also boasts a number of shrines that, when reached, refill your life meter as well as offer a checkpoint should you die. These shrines are so generously scattered and strategically placed that you’ll be focussing on reaching each one; and you’ll breathe a sigh of relief when you do as the game offers such an exciting challenge that you’ll be glad to find some reprieve in their discoveries.

You’ll find a large variety of enemies that stand in the way of you reaching your goal. Each one possesses different strengths and weaknesses that you’ll need to learn in order the get the most of your combat abilities. As well as your handheld weaponry, the backgrounds also contain a variety of interactive environmental objects that you can utilize in order to turn the tide of your battles, from lanterns that can create a flood of fire to large platforms that drop barrels on suspecting foes when their structuring beams or ropes are dislodged. 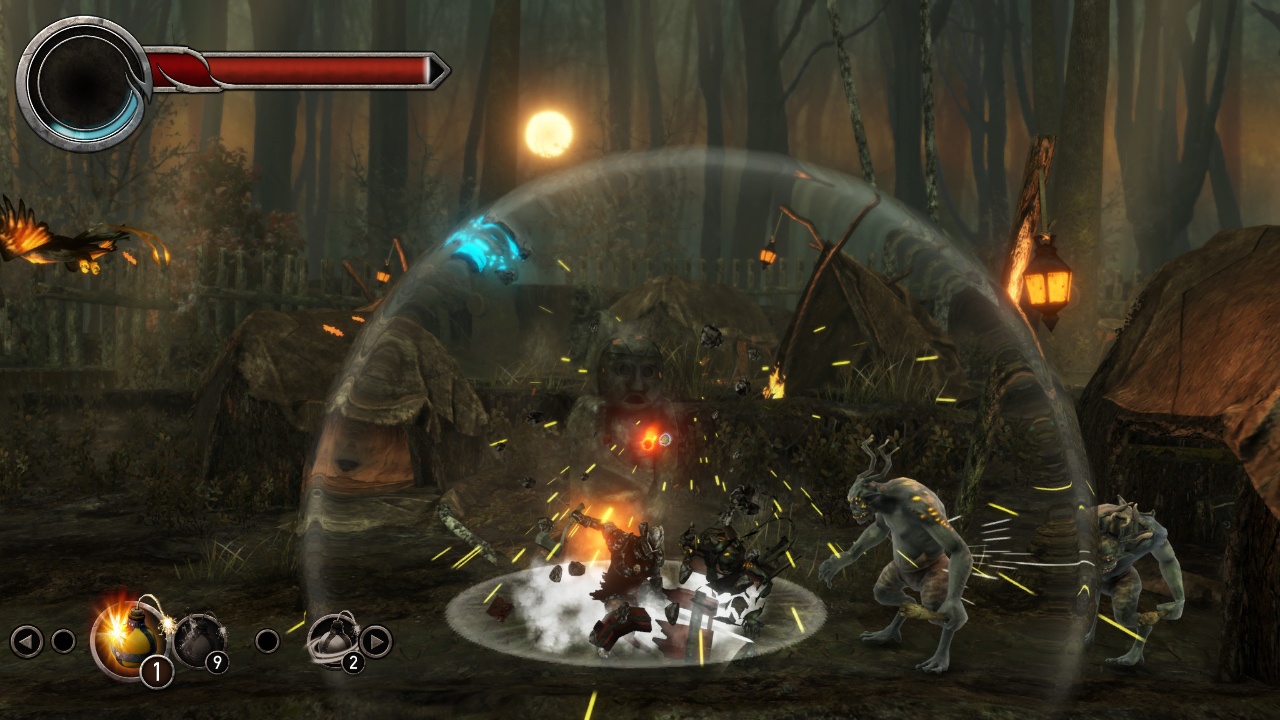 To keep each level varied, you also need to traverse dynamic action sequences which keep you on your toes and provide some of the games’ most thrilling moments. It’s important to keep a momentum of speed and accuracy in your timing to get through these sections, but they ramp up the mechanics of the platforming so much that you’ll feel a real sense of accomplishment when you get through them. At the end of each of the environments, you get to face off with huge bosses which offer a real test to your abilities. You’ll need to use all of your techniques learned from blocking, short and long-range attacks, as well as the various power-ups that you can collect on your journey from throwing knives to explosive grenades.

Scattered throughout each of the levels are five hidden pieces of heart. Each segment is fiendishly concealed and certainly requires investigation and exploration to find them all; a task made all the more difficult with your ever decreasing life bar. However, you are free to revisit any completed level in order to find any fragments you may have missed, thus increasing any replayability values that the game possesses.

Overall, the game plays a very solid experience in both the hack & slash and platforming genres. Every part of the game’s mechanics is as tight as the fitting of a knight’s coat of armour. Its production values are so polished that it gleams from every part of its elements from the gameplay to the graphics. If you’re a fan of either of its genres, then Castle of Heart is a game that you simply can’t afford to miss and 7Levels have most certainly created a title that most definitely has its finger on the pulse.