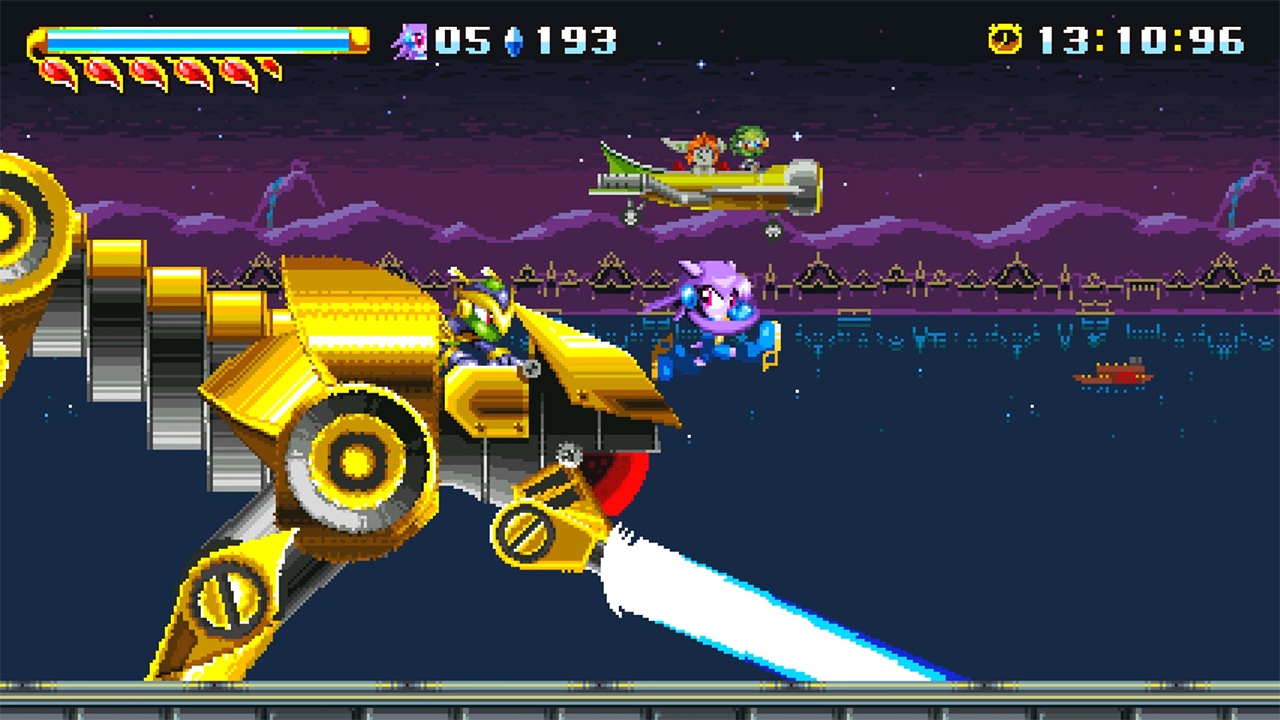 It must suck to originally be catapulted into the limelight as “a great Sonic replacement.” I mean, sure, Freedom Planet was openly and honestly developed as a Sonic fan game, and there’s so much Sonic remnants sitting around in-game, but still, there’s a stigma still sitting in place. Especially since, when Freedom Planet first dropped in 2014, it was so needed by the fanbase in general. We were years away from the gasp of hope that was Sonic Mania, Sonic Boom wasn’t giving us a lot of hope in terms of a decent title, and Sonic would be mysteriously absent from his own titles, instead opting to appear in Smash Bros (yay) and Lego Dimensions (huh?). Even today, after Sonic Forces suckerpunched us in the good will, there’s still a call for something that captures the magic without needing the same mascot. And, with Freedom Planet 2 on the horizon, a Switch port of the original is a much-needed reminder of what can be done with inspirational roots and actual creative output.

Freedom Planet is the story of Sash and Carol, a dragon and wildcat (respectively) who rescue a duck named Torque and set out to recover a powerful relic known as the Kingdom Stone. You see, as of late, the new king of planet Shuigang has been acting a bit crazy and invading every planet to steal its energy, presumably as a side effect of the grief that comes from losing your father. Naturally, the characters don’t know (but the players do) that Dali is actually being mind-controlled by the super evil Lord Brevon, who straight up beheaded Dali’s father and then reprogrammed young Dali’s brain. Working together with an unlikely band of friends (including the basset hound Milla, who can be unlocked as a playable character), Sash and Carol race against time to quell the coming war, including stealing the stone back from Brevon (who naturally gets it in the first chapter), unite the smaller planets, and hopefully bring peace and unity across the whole galaxy. It’s a bizarre, daunting quest, but, for anthropomorphic animals, it’s far from impossible!

As you may have guessed from my rant at the beginning, Freedom Planet does, technically, play out as you’d imagine a Sonic the Hedgehog classic 2.5D game to play. The main objective is to run from one end of the stage to the other, taking various routes and courses in order to pick up a bunch of shiny things, beat up robots and dodge hazards, and, occasionally, deal with a larger robot boss at the end of the stage that may or may not make things more difficult. Additionally, there are various power ups that you can find (a feature that really presented in Sonic 3), such as temporary full invincibility, some kind of shield that both protects from projectiles and seems to draw other items closer, and the occasional mega boost in dash stamina. Oh, and the characters you care about are animals that walk on two legs, so that’s also a thing. Granted, they’re more akin to the later Sonic friends group than the earlier (notice the lack of two tailed foxes), but the parallel could still be drawn. 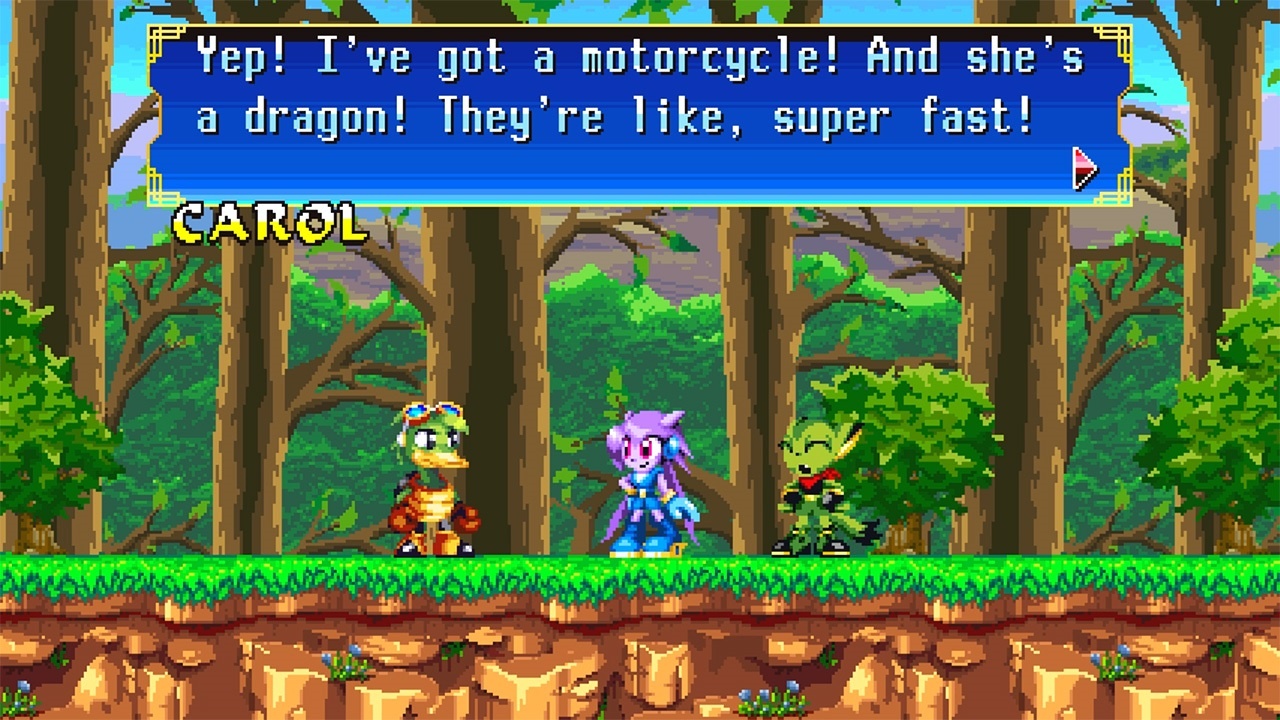 That, however, is the end of the comparison, and it’s where Freedom Planet starts to shine with ingenuity beyond this point. Carol and Sash both have their own unique approach to the game, really showing some dynamic thinking to how to complete each level. Sash is more of the speedster, having a floaty cyclone jump that allows for striking in the air, as well as a sort of on-a-dime dash attack that can ricochet off various surfaces as long as she has energy. Carol, on the other hand, is more brutal, can deliver a flurry of kicks to take down almost any enemy, can wall climb, on occasion and ride a sick motorcycle across the landscape; there’s nothing cooler than seeing her do a barrel roll on a motorcycle, so that’s going for the game as well. Much like the aforementioned series, Freedom Planet does a stellar job of making levels that could potentially be easier with one character than another, but basically make it so there’s serious replay value by experiencing the whole game from different perspectives and methods of completion.

Additionally, for better or worse, Freedom Planet is a much slower game than the Sonic series ever was. In the 16 bit generation, there were a lot of levels where you could simply lean on the gas as hard as possible and rocket to the end, leaving hidden coins and Chaos Emeralds to the completionists. For Freedom Planet, there are many stages and areas where you must pace yourself, sometimes doubling back or even tripling back to unlock and complete certain places. Early on, there’s a wall that can only be unlocked by entering one branch, going through and toggling a switch, returning, entering another branch and toggling that switch, then finally returning and progressing forward. It’s certainly not a bland or boring mission: having this kind of labyrinthian design really showcases some original thought on the part of GalaxyTrail. And it also shows that they understand what keeps players from getting burned out. If all you do is run, sometimes you’ll just get really tired. Make the people work for it, and also make it so that you don’t just jump on every enemy to kill them.

The level designs can sometimes feel a little disjointed when you play through in arcade mode, but they make perfect sense and are actually quite cohesive if you go through the story mode. Both are possible from the very beginning, including some incredibly generous difficulty settings in order for players to get better accustomed to the game/give themselves a challenge. Below easy is the Casual setting, which is really just there for a fun, almost pressure-less time within the game. Enemy fire is minimally damaging, health replenishment is plenty and generous, and you feel like you’re almost along for the ride, especially in the story mode, where you can drink in the unfolding drama and understand the complex relationships some of the characters have. Hard mode is basically where players can show off what they’ve learned through previous playthroughs and really test themselves: the enemies hit harder and health basically gives you modicums of replenishment, but the maps and the layout don’t change. If you’re working on improving your time attack scores, this could be the mode for you. But if you’re looking to collect all the hidden gallery items strewn about (and some are way, way tucked away), then I’d suggest knocking it down a few notches so you can hunt in peace. 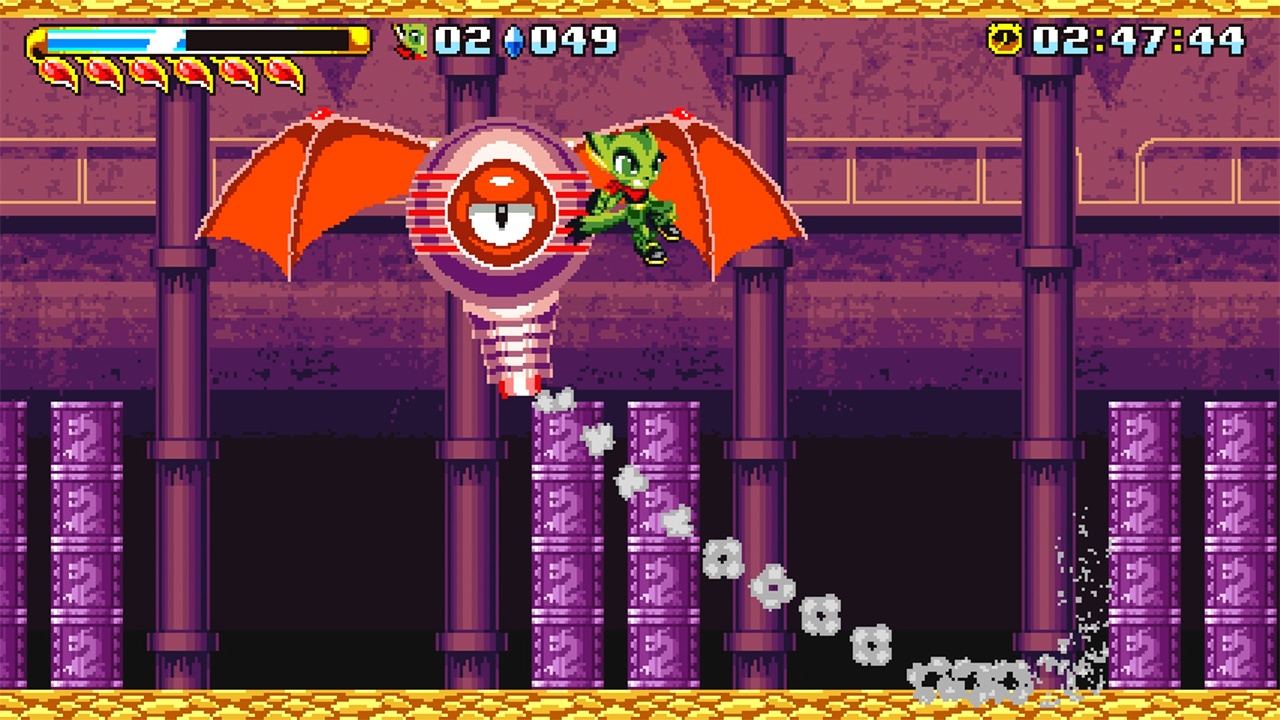 Lastly, the aesthetic of the game. Freedom Planet is a bright, neon-against-darkness created game with plenty of flashes of color, light and pretty decent animation. The story mode (which, by the way, allows you to choose who’s at the helm) has plenty of fantastic cutscenes to help explain the story further, as well as some truly excellent voice acting. While there are things in the story that may be confusing, it’s refreshing and awesome to hear the lines delivered with such an impassioned presentation and power. The whole game is audibly lit by an incredibly fitting soundtrack, helping to illuminate darker moments, accenting when things hit a fast sprint, and bringing you back down to earth when Brevon monologues his evil intentions and ideas. It’s well crafted, is what it is, and nothing about the music was jarring or displacing.

Ultimately, fans specifically looking for a Sonic game would be disappointed. Freedom Planet may have had some roots with the Blue Blur, but this game is far and away removed from those origins. It has some pretty fun combat, fantastic mechanics, creative layout and some pretty dope tunes throughout. The replay value is fairly high between both the collecting and the speed running, and the whole experience is a different approach depending on who is at the helm. If this was just meant to get players hyped for the sequel, then it’s done a fantastic job, and, moreover, it’s the first truly mobile opportunity for this game. If you’ve never played it before, there’s no better place than on the Switch, and Freedom Planet definitely rocks on throughout the galaxy.

Freedom Planet shows players and developers alike what can happen when a fan project takes on a life of its own and becomes a truly memorable game.